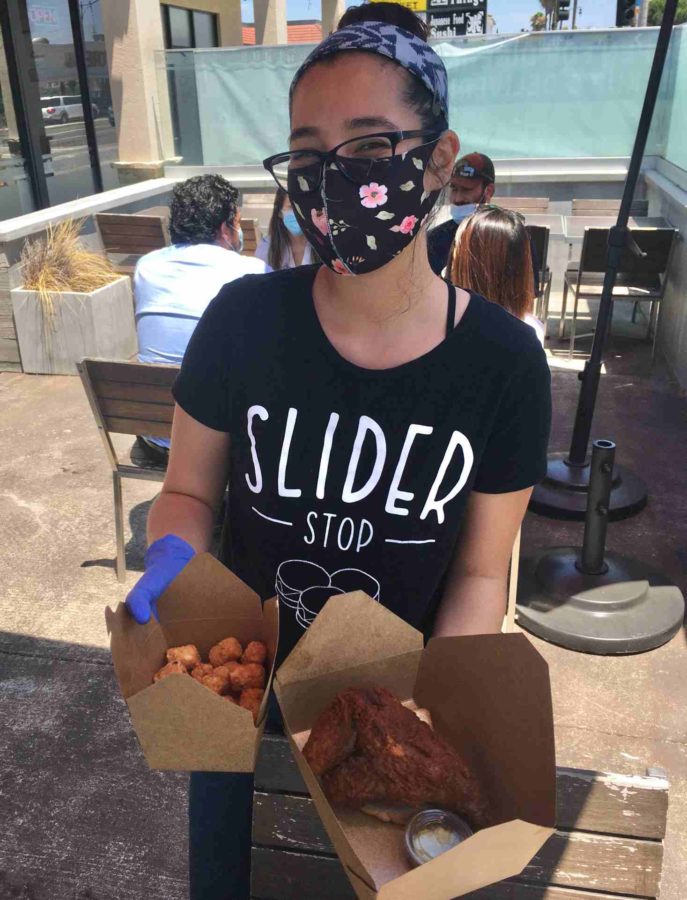 A server at Blazin Hens delivers a miled quarter bird and an order of housemade tater tots. Photo

A server at Blazin Hens delivers a mild quarter bird and an order of housemade tater tots. Photo

One of America’s hottest food trends, literally and figuratively, started as an act of revenge when a woman who was angry with her boyfriend put punishing levels of chili peppers in his food. The year was around 1930, the city was Nashville, the food was fried chicken, and he loved it and asked for seconds. History does not record her reaction, but she couldn’t have realized she had started a trend that would peak 90  years later.

The Nashville hot chicken craze spread to the world two years ago and spawned numerous variations, among them versions accented by Korean, Chinese, and South Indian spicing. That last item is mysteriously called “Chicken 65” even though nobody knows any connection with that number. Here in the South Bay, those of us who have been happily munching hot wings for years are finding much to enjoy in all of these. I decided to do a comparison of two spicy fried chicken experts, one very well established and the other a relative newcomer.

The Ragin Cajun in Redondo Beach started serving Louisiana-style fried chicken as an occasional special, and it was so popular that two years ago it was added to the menu. I remember the first time I tried it and was awed by the experience. The bird was big, the meat moist and flavorful, and the batter came out perfectly crisp with a complex, slow building burn. It immediately became my favorite fried chicken in the area.

I hadn’t stopped by the place in a while, but when an out of town visitor mentioned a craving for spicy food, the Ragin’ Cajun leaped to mind. Like every responsible restaurant they are enforcing personal distancing, and we were seated on the patio and assured the tables next to us would not be seated. As it happens this wasn’t a problem, because all of the other diners during the time we were there preferred the cheerfully hokey interior. I was warned when I ordered that it would take at least 20  minutes, which was just fine. Fried chicken that is made to order can’t be rushed, so if it takes less than 20 minutes it probably isn’t fresh. (There are exceptions; a few places offer smoked fried chicken, and the two-step preparation halves the cooking time.)

We whiled away the wait conversing and nibbling a side of fried okra, a Southern delight that many of my friends are unwilling to try. If you have only had okra in stews and were put off by the slimy texture, try this. The crisp cornmeal crust and fresh vegetable flavor are fantastic together, and though we had some ranch sauce for dipping we hardly touched it because it was so good all by itself.

When our meals arrived, he dove into his gumbalaya like a starving wolf, while I spent some time admiring the beauty and scent of the chicken. I had to, because both it and the accompanying hush puppies were too hot to touch with my fingers, much less my tongue. I had a salad as a side item, but I was saving it to cool the spice burn from the chicken.

After a few minutes I became impatient and decided to risk it. I bit into a meaty drumstick and felt the batter shatter, the rush of juice from the interior, and I anticipated the first simmerings of the spice burn. They showed up, but in a much milder form than I remembered. It was a big portion of excellent fried chicken, but with a gentle spiciness instead of an assertive blast. A manager told me some customers had complained the chicken was too hot, so they moved it down a few notches to accommodate them. There was a certain irony about this restaurant moderating their spicing just as everyone else was amping theirs up, but it made sense, because the top priority for a restaurateur is accommodating the customers. They will make the fried chicken full throttle spicy if people ask for it, and I suggested that they let customers know this is an option. I should reiterate that it was excellent fried chicken with a little heat just as I had it. If you like yours this way and haven’t been ordering it because you think it will be too hot, go for it.

A few days later I visited a business that was transformed by the hot chicken craze, Blazin’ Hens on Artesia in Redondo Beach. If you haven’t noticed that particular establishment before, it is because the sign out front says Slider Stop. There’s a small banner for Blazin’ Hens hanging next to the much larger Slider Stop sign, but it’s not easy to see if you are driving by. The situation of two businesses sharing one building has been taken to a bizarre extreme, with separate websites for the chicken and for almost everything else they serve, but no links between them. (In order to enhance the confusion, there are pictures of the chicken on the Slider Stop site, but no explanation about why, because it isn’t listed on the menu.)

The Blazin’ Hens website does have a lot of useful information about their chicken, which comes in six levels of heat from plain, seasoned but not spicy, to “blazin” which has Carolina Reaper peppers in the batter. You will not read a review of the latter in this column, because I don’t intend to go near it. My wife and I tried the first four levels, and the hottest of those was plenty for my tastes.

First, though, I should mention that as long as you are on Blazin’ Hens website you should order your chicken on the appropriate link. They take at least 25 minutes to cook, and at times the kitchen here is slammed so it can take half an hour from the time you order for them to start your batch. If the wait would be a dealbreaker, then advance planning will smooth the path. We ordered online and were told that it would be ready in 42 minutes, and I was there early in case they had overestimated it. It took 44 from click to chick, which arrived so hot from the fryer that the bottom of the bag was uncomfortably warm.

When I unwrapped it at home, we were awed by the size of the birds. They use full-grown jidori chickens, a heritage breed, rather than the small commodity birds that are standard, and if you usually think of a half-bird as a meal then you might start with a quarter here. I didn’t know this, so we had a lot of leftovers. Fortunately, cold fried chicken is a great snack, even more so when it is as spicy as most of what they serve here.

I had been concerned that the more lightly seasoned birds might be cooked in the same oil as the hot stuff and thus rendered inedible to my wife, who has a limited tolerance for heat. This was not the case, and she thoroughly enjoyed both the plain and mild versions. The plain was best for those who are really all about the unadorned chicken flavor, with just a little salt, black pepper, and mild herbs to accent the flavor of high-quality meat. The mild version has a gentle kick from Guajillo pepper, a variety noted for its sweetness as well as its heat. These peppers have a slight fruitiness, and along with the other seasonings in the batter created a nuanced, layered set of flavors. She enjoyed both variations, but to my surprise liked the mildly hot just a bit better.

I had ordered medium hot and the hot that is level four out of six.The medium was at the high end of my wife’s chile tolerance, and equivalent in heat to the Ragin Cajun’s if you order that spicy. It is also similar to their chicken in that cayenne pepper is most prominent in the mix, and that varietal is traditional in Louisiana. The RC’s chicken has a bit more garlic and green herb flavors than Blazin’ Hens, but both are a thrill ride for the taste buds.

And since I used that metaphor already, I’ll just say that Blazin’ Hens’ hot chicken was a somewhat scarier thrill ride, the kind where are you fleetingly wonder if the person who designed the roller coaster actually has considered mass murder in their spare time. The dominant pepper is habanero, the small yellow pepper once regarded as the hottest in the world. New varieties like the ghost pepper and Carolina reaper have dethroned it, but it still has a malevolent heat with slight citrus and floral overtones. The heat came in waves, and I turned red, sweated, and hiccupped, to my wife’s great amusement. I also finished my piece of chicken, because there was something amazing about the experience. Have lots of napkins ready, and wash your hands with soap before you touch any part of your face or you will regret it long and deeply.

With the chicken we ordered tater tots, which were a fun salty break between bites of chickeny goodness, and an “avocado goddess” salad that doesn’t appear on the Blazin’ Hens website but ought to be there. This green salad with bacon and avocado is a wonderful cooling respite from the heat, and should be in everybody’s order of anything above mild. They offer handmade milkshakes too, which must be wonderful after a bite of the spicy stuff.

Blazin’ Hens also offers chicken made with the aforementioned ghost and reaper peppers, and you are welcome to try both and tell me all about them. I’m pretty sure that I know my limits, though someday I might be brave and try the next notch hotter. Until then I’ll be delighted to have the hot chicken at the Ragin Cajun or any of the milder birds at Blazin’ Hens and know that I will live to tell the tale.

Blazin’ Hens/Slider Stop is at 2315 Artesia in Redondo. Open daily except Monday for lunch and dinner, hours vary. No alcohol, patio dining. (310) 214-5200. BlazinHens.com and SliderStop.com. ER