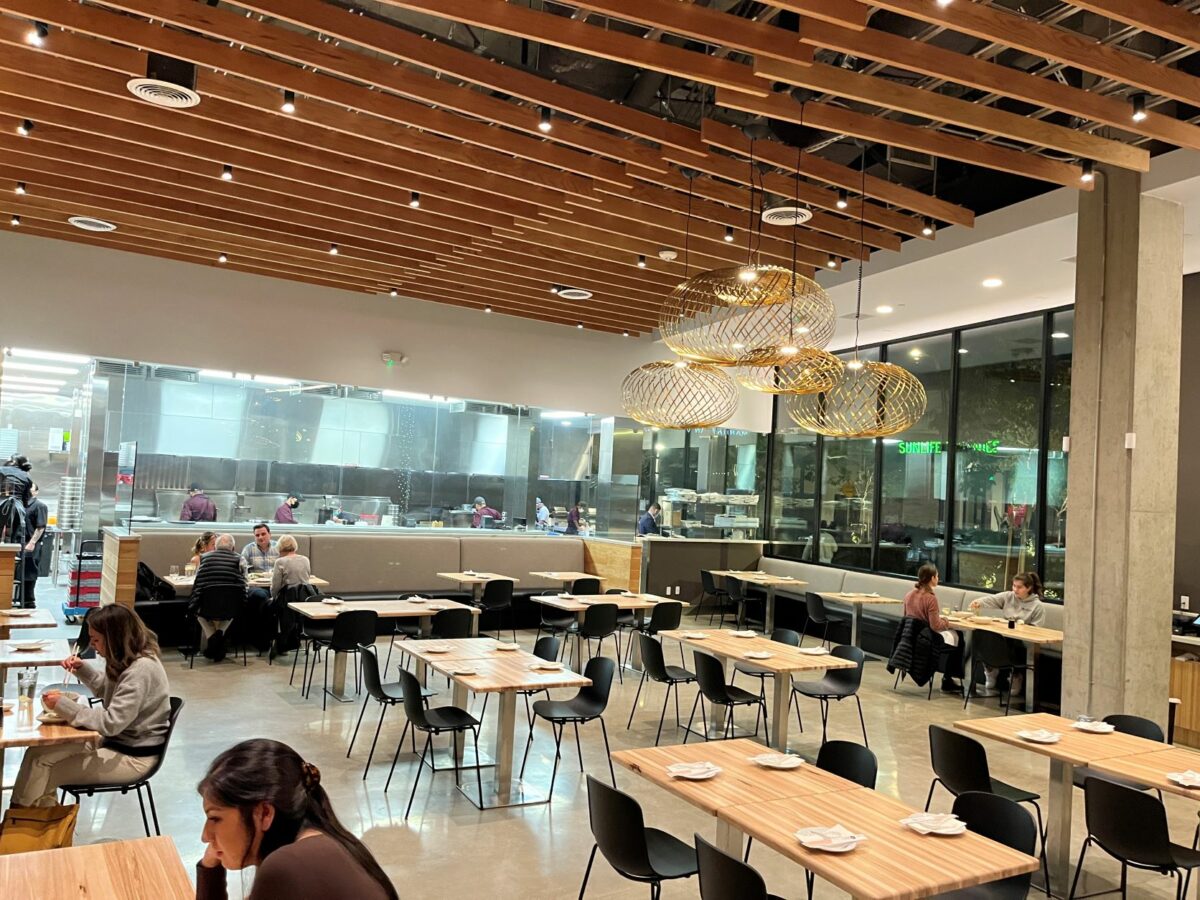 Some people find ordering at traditional Chinese restaurants intimidating thanks to the overwhelming number of items on the menu, some of which have metaphorical names. One might guess that Buddha’s Feast is a vegetarian dish because the founder of a religion that forbids meat wouldn’t want to set a bad example, but what vegetables might those be? The question is even murkier when faced with metaphorically named items like Jade Pond Tofu, which probably contains no actual jade, or Ants on A Tree, in which neither insects or trees are involved.

Dan Modern Chinese in Manhattan Village is an offshoot of a chain based in Pasadena, which offers a much easier ordering experience thanks to their menu’s tight focus. Most offerings involve dough, either formed into noodles or made into dumplings. But that doesn’t mean there are no decisions to be made. Want those noodles thick or thin, in soup or fried? Should those dumplings be steamed or fried, and what would you like inside — meat, vegetables, or soup? You have enough choices to get what you enjoy, but it’s not overwhelming.

If you haven’t seen Dan Chinese, you’re not alone – they occupy a space that is effectively hidden despite being near the center of the new restaurant development at the north side of the mall. They’re located in the east end of the parking structure facing the main mall, in an area without much vehicular or foot traffic. There is little signage on the nondescript space, and you can actually be in front of the front door without seeing any logo or name.

The interior is relentlessly modern, a warehouse-like space with no suggestion that it’s a Chinese restaurant except for the chopsticks and white porcelain spoon on every table. You might also guess from the sight and sound of the open kitchen, where the clang of cutlery against woks lets you know that serious Chinese cooking is underway.

Before you actually tuck into those noodles, dumplings, or one of the other dishes on the menu, an appetizer might be in order. I’ve tried the scallion pancake, popcorn shrimp, and salt and pepper tofu, and they’re all good. Fresh tofu has a mild flavor that is accented by being dusted with cornstarch and seasonings, deep fried, and topped with crispy garlic and chopped green onion. The tofu develops a slightly more intense flavor and crisp skin with an almost liquid interior, and the crispy garlic, and fresh onion add texture and pungency. Like just about everything here, it’s an item with five ingredients or fewer, where execution is everything.

The fried shrimp takes the same aesthetic to seafood, cornstarch, crisped scallions, green onion, and all, but with the addition of a garlic mayo sauce that has just a hint of chili sauce. Pro tip – dip the shrimp in the sauce and then pick up the onion and garlic with the sticky sauce – it’s much easier than balancing the dry ingredients on top of the irregularly shaped shrimp. That sauce does make things more interesting, and next time I order the tofu I’ll ask for it on the side. The scallion pancake comes with a different sauce, composed of soy, sugar, garlic, and ginger, and if you like an oniony pastry with a sweet and sharp sauce, it’s a surefire hit. 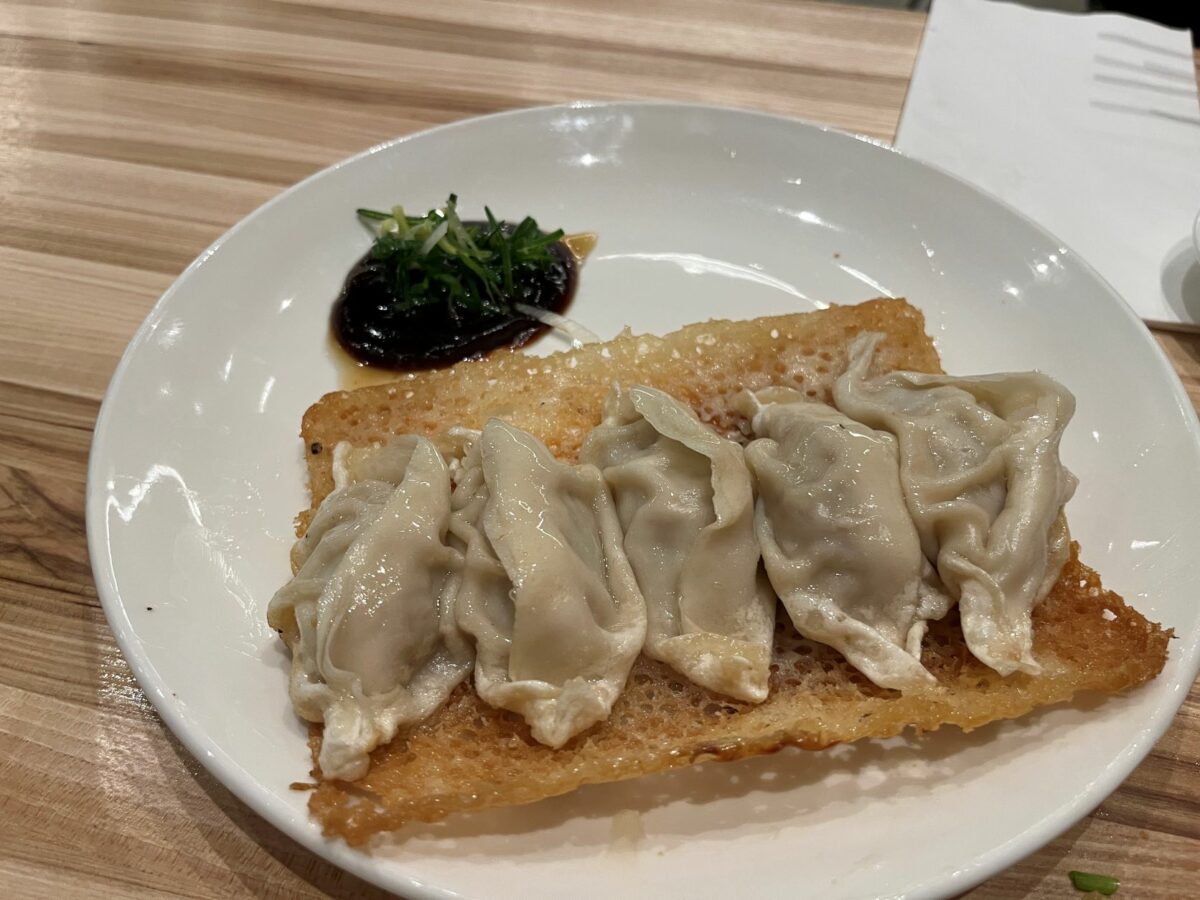 The signature dish at Dan Chinese is their soup dumplings, fat packets of dough that are stuffed with your choice of fillings, a gelatinized broth and then steamed. The steaming liquifies the broth, and you have a dumpling filled with soup. There’s a ritual to eating these that is depicted on the chopstick wrappers: you bite the very top of the dumpling so the soup can start to cool, add either black vinegar or soy sauce to taste, top with shreds of ginger, and then pop the whole thing in your mouth. Do not try to eat this in two bites – you will regret it, and also wear the soup home when it spills out. This complexity has a payoff in a succession of flavors, sharp ginger, luscious rich broth, and a contrasting acidity from the soy or vinegar (I strongly suggest the vinegar). You have your choice of pork, shrimp, chicken, or crab filling, individually or in combination, but no vegetable option.

You do have a vegetarian option with the standard dumplings, as well as the option of having them steamed, pan fried, or crispy. The crispy version isn’t deep fried, but a way of frying them so the soft dumplings arrive perched on a crisp, lacy crust. This is a nifty magic trick, and I want to learn how to do it, because the presentation is startling and the effect is delightful. These dumplings arrive with a thick sweet and spicy sauce topped with shaved scallions, though if you prefer a standard chili oil they’ll bring it.

I’ve tried both types of noodles, thin ones served in soup that are similar to ramen and thick ones similar to udon that are stir fried. That similarity between Chinese and Japanese foods has something to do with the fact that this chain has Taiwanese influence, and Taiwan was ruled by the Japanese for 50 years.

Dan Modern Chinese offers broths made with chicken, beef, or spicy beef, and the chicken has a light, fresh flavor and no MSG – there’s no MSG in anything here. There are hints of garlic and ginger, some chicken meat slices, bok choy, and onion in the broth, and the focus is on the natural flavors. The noodles are very springy and toothsome, and if you’re looking for a wholesome bowl of soup this is on target.

The fried noodles are served in a mild and slightly sweet brown garlic sauce and have just a bit of caramelization and chewiness from contact with the searing heat of the wok. On one trip we ordered the vegetarian version which seemed to have only snow pea leaves and broccoli, on another visit shrimp, which also included the same vegetables. Given the wealth of produce used in Chinese cooking, this lack of variety was somewhat surprising. The fried noodles weren’t bad, but I preferred the noodle soup for richer flavors. 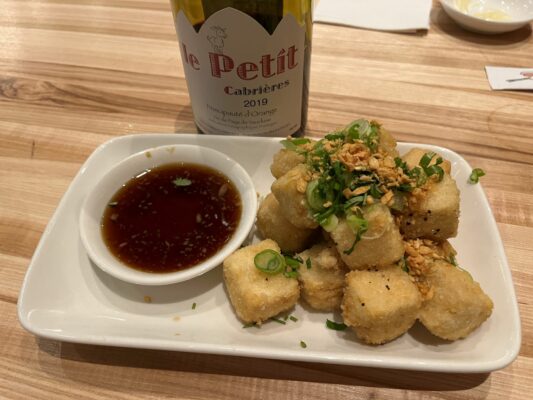 The menu at Dan does go beyond noodles and dumplings, and we tried their versions of mabo tofu and Three Cup Chicken. The Mapo style, named after a village in Sichuan, is usually quite peppery, but the Taiwanese version moderates the chili heat and fermented black bean funkiness of the original. There’s still some heat and quite a bit of flavor, with the vinegar in the dish standing out more than usual, but you’re unlikely to break into a sweat eating this. If you have tried mabo tofu before and found it overpowering, give this version a shot, and if you like the traditional preparation you may find this an interesting variant.

Three Cup Chicken is named for the three ingredients of the sauce: equal parts soy sauce, Shaoxing cooking wine, and sesame oil. To this is added sugar, ginger, garlic, and fresh basil, plus some dried chili peppers. It wasn’t served in the traditional Jiangxi style, which involves a sizzling hot clay pot that crisps the chicken, but the texture had an agreeable slight chewiness and slight caramelization. This was easily the spiciest item we had at Dan Chinese, though it had little or none of the “numbing heat” that is a feature of Jiangxi cuisine.

Dan Modern Chinese has a short list of wine and beer, and we liked the French white that was offered but found the rose less interesting. No desserts are offered, which is unfortunate because there are some interesting ones in modern Taiwan (like a luscious pineapple shortcake).

The food at Dan Modern Chinese is moderately priced for a mall location and the portions are large – get one item each and one for the table and you’re probably set. It may take some hunting to find the place, but the search will pay off.