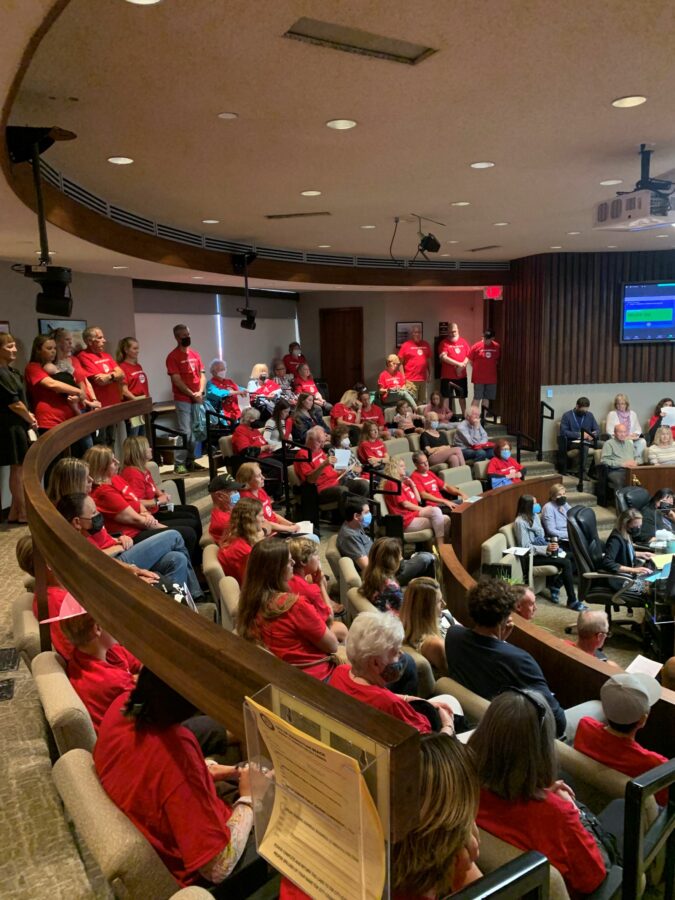 Firefighters from the Manhattan Beach Fire Department and residents who support them in their standoff with the City Council flooded the City Council chambers Tuesday night, wearing bright red T-shirts emblazoned with “Keep Our MBFD Local,“ and pleading with the council to alter its stance in labor negotiations. More than 200 people filled the council chambers, overflowing outside into City Hall.

Firefighter Rudy Meija, the Manhattan Beach Fire Association president, was the delegation’s first to speak. He said the City’s hard-line tactics seem destined to drive MBFD to L.A. County control, like other nearby fire departments.

Meija, as well as most of the dozen, or so firefighters who followed him at the podium during the public comment portion of the agenda that begins meetings, delivered four requests to the council.

First, they asked that the battalion chief contract —  a separate collective bargaining agreement —  be renegotiated and to freeze the hiring of three chiefs from outside the department; second, they asked for the same cost of living salary increases the other city unions received over the last 3.5 years, a period during with MBFA has not received an increase; third, they asked for the formation of an ad hoc committee that includes council members, firefighters, and members of the public to address MBFD concerns. Lastly, they asked for a community-wide town hall to discuss the issues.

MBFD Captain Tim O’Brien, a 35-year veteran who briefly served as chief, zeroed in on the battalion chief issue. The three battalion chiefs who were hired by former MBFD Chief Robert Espinosa, in 2019, cut a separate deal with the City, taking modest 2 percent pay raises but agreeing to a 15 percent pay cut for the position for all battalion chiefs who would follow them —  essentially creating a “two-tier” salary structure, similar to what firefighters are now being offered. But the deal had a significant additional impact: it meant that the battalion chief position, the second highest in the department, would now pay less than the captain position, which is where internal candidates from MBFD generally are promoted to become chief.

“After the city gave our former battalion chiefs the sweetheart deal, those battalion chiefs took their retroactive pay raise and failed this community,” O’Brien said. “Each of them went on disability for up to one and a half years during a pandemic. We were left having to cover their work and keep this department running, leading to extraordinary overtime. What’s worse, is now we’re being villainized for filling the vacancies for a problem we did not create, and you have refused to fix….Do any of you have the courage to say this doesn’t feel right? Do any of you have the courage to stand up for your firefighters?”

The council, on Tuesday night, appeared prepared for the onslaught. At the very same time Meija delivered MBFA’s opening remarks, the City issued a press release that countered much of what the firefighters would argue over the next hour.

“The Association’s campaign displaying the ‘Keep our MBFD local’ slogan on T-shirts, their website and social media platforms is misleading,” the press release said. “In truth, there is absolutely no threat to keeping our Fire Department local. In fact, this hasn’t been discussed in over three years, since the Council unanimously rejected the feasibility study to contract with L.A. County Fire in 2019. The City Council is proposing changes as part of our labor negotiations process that will actually help keep our Fire Department local and sustainable into the future.”

Firefighters have worked without a contract for two years. The council’s proposal to MBFA would implement several significant changes. Future firefighter hires would have a reduced salary, forming a so-called two-tier salary structure. The department’s two fire prevention positions, currently staffed on a rotating basis by firefighters, would be civilianized. Changes to vacation, holiday leave, and sick day policies would cumulatively reduce time off by more than a week a year. The proposal also includes reduced paramedic bonus pay for firefighter/paramedics who promote to higher ranks. And perhaps most significantly, the proposal would impose a drastic change on how MBFD staffing works, lifting a “prescribed staffing” provision in the contract that the City claims would allow it to hire more firefighters and depend less on overtime (No actual new hires have thus far been formally proposed, however, so MBFA sees this as a loss of two positions). Taken altogether, the City Council says the changes are intended to rein in overtime costs that have resulted in firefighters in some instances earning over $400,000 annually and MBFD itself ranking as what the City believes as the highest paid fire department in the state.

Firefighters, instead, see a department under siege, one which has endured unprecedented instability, including six chiefs in four years. They point to the City’s failure to fill vacancies as the primary reason driving excessive overtime, and illustrated this argument in often vivid terms Tuesday night.

MBFD Captain Dave Shenbaum, whose overtime and resultant inflated compensation has been used as an example by the City in its efforts at reform, spoke about that overtime.

“For the last year, I worked an additional 1,900 hours of overtime…almost 100 hours a week, every week, for an entire year,” he said. “Hours that I did not choose to work. I have three daughters, one in college, one just graduated high school, and one is still in high school. This is the last year that my kids will all be living under the same roof with my wife and I, and I was forced to work 1,900 additional hours after serving the city for 28 years. And now, you are using those hours against me to show the public, ‘Look how much money he made.’”

His daughter, Jenna Shenbaum, later came to the podium. She talked about the day

“I wanted to share with you all today what it is like being a child of a Manhattan Beach firefighter,” she said. “When I was younger, I loved having him show up to school events in his uniform. I’d brag that my dad was a real-life superhero. But the excitement quickly faded as I realized that if he was in his uniform, it meant that he had to go back to work because there weren’t enough people to get his shift covered. Most recently, he was able to come to my senior year prom photos for 15 minutes. This is because he was force-hired to work…. And even when he is home, my family and I can see the mental and physical toll that this job has taken. After working 25 out of 31 days last July. We had to cancel a family vacation because they did not have any battalion chiefs to cover the city. So again, he was forced to work.”

She said when friends say they want to be a firefighter, she shows them a photo of her dad in his turnouts, taking a nap in the dirt near a wildfire in Northern California, where he was gone three weeks and came home and went right to work.

“Instead of being able to come home and hug his family, he had to go right back to the station because again, they were so understaffed that there were no other firefighters able to work,” she said. “No one sees the effects it has on our families and our relationships with our fathers.”

MBFD Captain Tom Desmond said his own 17-year-old son recently told him he wanted to be an MBFD firefighter, and he found himself trying to talk him out of it.

“Our firefighters have continually stepped up throughout the pandemic to protect this community,” he said. “In contrast, we feel the city has decided to attack the firefighter paramedics who have been forced to work excessive hours due to mismanagement.”

MBFD fire engineer James Falls defended Shenbaum and Captain Tyler Wade, whose work filling in as battalion chiefs was singled out in a City press release as earning them in excess of $400,000.

“They could have focused on themselves and family, but they stepped up and they did the right thing because that’s who they are, and they deserve our recognition and thanks,” he said. “The City will lead you to believe that they have filled all their back vacancies, that this overtime is our fault…. The fact is, this is your fault, council. This is your fault, [City Manager] Bruce [Moe], and anybody else who agreed to this battalion chief contract that gave those members raises and made it a pay cut for our internal candidates. It is shameful, it’s bad practice, and it is no way to run a professional fire department.”

“My suggestion is that the council and a fire department take a timeout right now,” he said. “There’s a lot of that overtime that could be eliminated without affecting any of the contract provisions, without having to have any of this rancor.”

Three people spoke who’d had their lives saved by MBFD, which is unusual in that the entire 26-person crew are firefighters and paramedics. One of them, Thomas Smith, said he had a major heart attack while in a locked bathroom at home. His wife couldn’t get in the door but called 911, and MBFD paramedics were there in minutes. They had trouble reviving him, and helped his wife get in touch with close friends in case the worst happened

“And suddenly my wife heard an excited voice that said, ‘We have a pulse.’ We were able to transport to Little Company of Mary Hospital,” Smith said. “By the grace of God and the skills of Manhattan Beach firefighter paramedics, I’m standing before you today.”

“It was said earlier there is more than one side to every story. It’s funny to hear so much about an ad hoc committee or a town hall,” Napolitano said. “The council previously asked these negotiations be done in public, but we were turned down by the Association.”

Napolitano tried to put to rest any notion that MBFD’s level of service has in any way deteriorated.

“We’re extremely concerned to see unfounded comments that our community safety is at risk,” he said. “That is simply not true. The council is responsible for governing the city and making decisions we believe are in the best interests of the City, taking into account the best facts available. Based on these facts, we have sought to make structural changes to the Fire Association’s employment agreement to accomplish the council’s goals of reducing excessive overtime, staffing more efficiently, increasing staffing levels, and providing management more decision-making autonomy while maintaining all firefighters/paramedics.”

Napolitano rejected the notion that excessive overtime has been driven mostly by vacancies. “In 2017, 2018, and 2019, there were no vacancies within the Firefighter’s Association, and yet members of the Association received excessive amounts of overtime, which resulted in the employee wages being higher than any other city fire department in the state since at least 2015,” Napolitano said.  “Using 2019 as an example, the year in which the department was fully staffed, 26 members of the Firefighters Association received a total of $1,915,797 in overtime… over $73,000 per person on average, which equates to an average of 38 shifts paid on an overtime basis per person.”

Napolitano said the Council remains united in its efforts to create a more economically sustainable yet excellent fire department.

“We value the services the fire department provides,” he said. “Lest anyone forget, your council are all residents who rely on the fire department’s responses, as well. I should know. There were regular visits to my father during the last year of his life. I will never forget that. Everyone tonight has a firefighter story, and I know that’s why you’re all here. But along with these stories comes a responsibility to maintain a sustainable department so we can continue to service into the future. These are personnel decisions, not personal attacks.” ER