CITY COUNCIL – Manhattan Beach will not trap and kill coyotes, for now 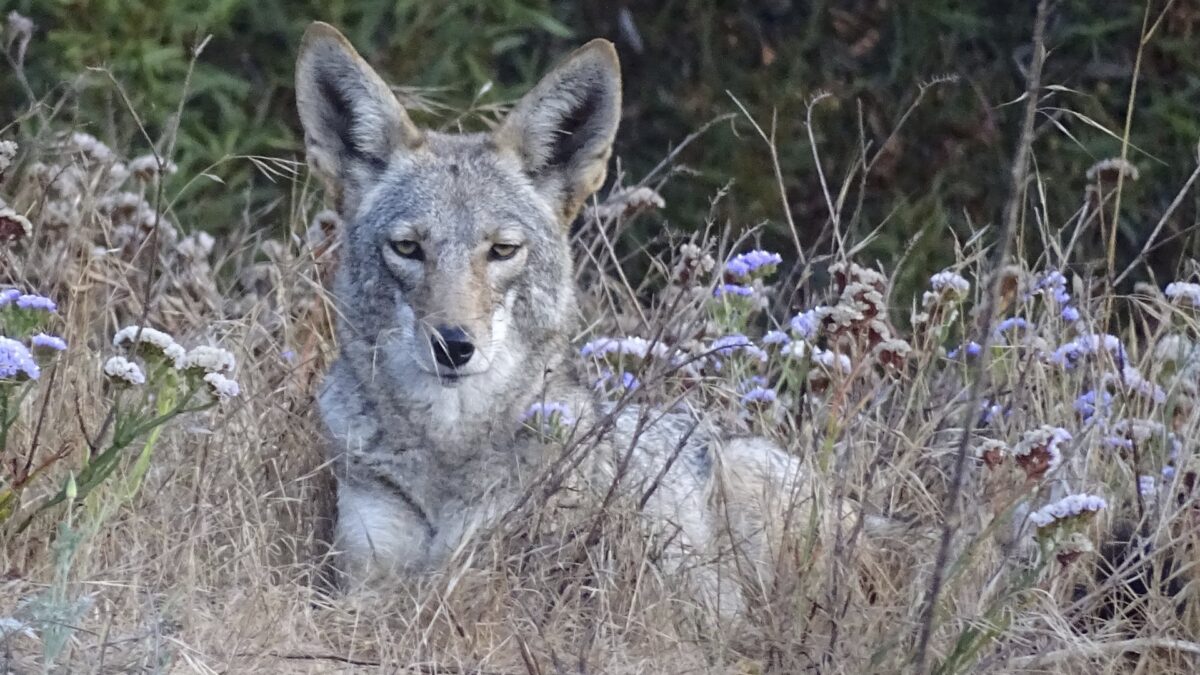 The defenders of coyotes descended upon Manhattan Beach Tuesday night. They implored the City Council to refrain from trapping or killing the animals, whose presence locally has been on the rise, and who have allegedly killed at least two pet cats.

For now, local coyotes won a reprieve. The Council backed a non-lethal management plan that focuses on public education to remove the food sources that have apparently attracted a pack of coyotes to Manhattan Beach.

Mayor Steve Napolitano broke a 2-2 tie among his council colleagues, and came down, somewhat warily, in favor of holding off trapping the coyote pack, which a wildlife expert told the council is led by a mating pair, or a “king and queen,” who cross into the city from Redondo Beach.

“I do have concern for the loss of our pets here, and I do put the residents, and the pets over the coyotes,” Napolitano said. “In this instance, I am willing to do six more months of the police management program to see how that goes…If we have a whole lot more killings out there, then I’ll be ready to trap.”

Representatives from the Humane Society, In Defense of Animals, Protect the Wolves, Union Members for the Preservation of Wildlife, and Native American groups appeared before the council to argue on behalf of coyotes.

Randal Massaro, national president of the Union Members for the Preservation of Wildlife, and host of the “Stop the War on Wildlife” show, told the council that trapping coyotes would have the opposite of its intended effect.

“As a teamster, as a retired law enforcement officer, and now national president, as well as the host of a TV animal rights advocacy here in Hollywood, I would hate for Manhattan Beach to be our next story about trapping coyotes,” Massaro said. “If you do your homework, and understand the ecology of coyotes when you start trapping…you’re not always catching the aggressive coyotes. You are catching the stupid ones. The aggressive ones are much smarter than those getting caught in cages. If you trap, you’re going to have more coyotes than you’ll ever count on.”

“The coyote has been persecuted, but has yet to be eliminated,” said Danielle Matthews, a local UMPW representative. “An estimated half a million coyotes, one per minute, are slaughtered every year in the U.S. by federal, state, and local governments as well as private individuals. Coyotes are survivors; they will adapt and succeed no matter what, as they have throughout our history. Coyotes are a valuable part of our beautiful ecosystem. To remove them would only result in other undesirable ecological issues. Coyotes keep the rodent population in check, and help control disease transmission. They are living beings who deserve to experience this life, just as we do, with compassion, understanding, and love.”

Roger Dobson of Protect the Wolves, a Native American non-profit advocacy group, said that animals should be accorded the basic right to exist.

“Wildlife, regardless of whether it’s a coyote or a wolf, buffalo, a grizzly bear, they all have their place in the circle of life,” he said. “And they all help to eliminate disease. Unlike hunters, they don’t target the strongest in the gene pool —  hunters always target the biggest head, thereby removing the strongest genes necessary to ensure a renewable resource for our children.”

Katie Nolan, from In Defense of Animals, argued that among the best ways to reduce the number of coyotes was to address the proliferation of outdoor pet cats, and feral cat colonies.

“Cats who live indoors have higher life expectancies and a reduced risk of disease,” she said. “Additionally, feeding feral cats at certain times of the day, or taking food trays at night, would remove wildlife attractants and reduce coyote conflicts. A feral cat management program would promote the welfare of cats and keep the community safer.” 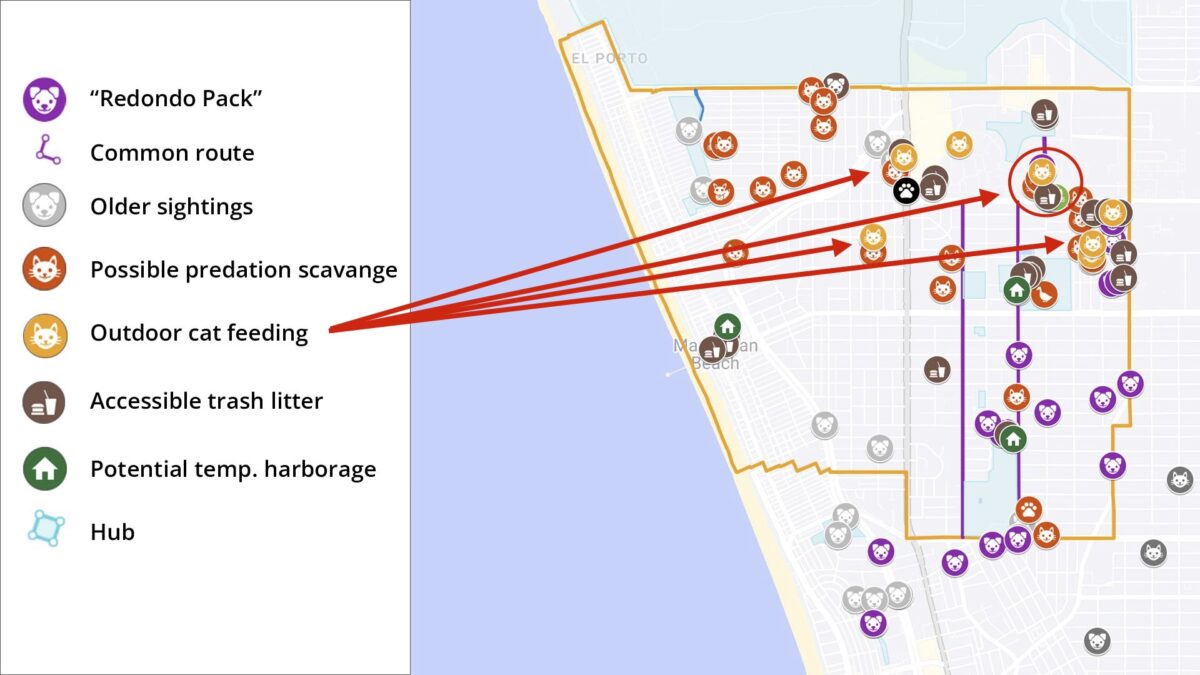 Humane Wildlife Control mapped out the movement of the “Redondo pack” of coyotes into Manhattan Beach, as well as the food sources that may be attracting them.

A wildlife expert retained by the City to study its coyote population identified feral cat colonies, and specifically, the open air feeding of those cats, as a big reason why more coyotes have shown up in Manhattan Beach in recent years. Rebecca Dmytryk of Humane Wildlife Control linked at least two “predations” of cats by coyotes to such feeding.

“Let me explain what happened in Liberty Village, where one or more cats were taken by coyotes,” she said. “We believe the problem started with outdoor stray cat feeding. A group of stray cats was abandoned by a neighbor who moved out. The rest of the neighbors tried to do the right thing by feeding them, not realizing it was going to attract predators like the coyote.”

Dmytryk conducted her study by walking through the city and talking to people who had witnessed coyotes, as well as analyzing coyote sightings, and confirmed predations. She determined the coyotes are part of a small pack she dubbed the “Redondo pack.”

“I feel really confident that there are no coyotes actually living and dwelling inside Manhattan Beach City,” she said. “However, there is at least one family unit, or pack, that enters Manhattan Beach from the south, from Redondo and Hermosa, surviving in what I call hubs, like safety zones where there’s enough vegetation and limited human traffic. This pack consists of —  as all coyotes packs do —  two leaders, an alpha male and an alpha female. I like to simplify this by saying the king and the queen because they do defend a territory. There may be a couple of helpers in the pack, and then usually the pups of the year.”

Dmytryk said the Redondo pack likely has one helper, but the main reason for the uptick in sightings is because the queen had puppies.

“The pups start to disperse from their family as early as about seven months, which is about now,” she said. “So I think there are increased sightings and that would coincide with what’s called dispersal, when these animals are moving away from the pack…The sightings in my opinion do not support a very large pack.”

Dmytryk recommended development of a citywide “Canid Response Plan” —  not just for coyotes, but also red foxes — to educate the public on the best practices for not attracting the animals, including secured trash cans and no outdoor feeding of animals. She has worked with MBPD Acting Captain Andy Herrod to disseminate information, including door hangers containing best practices for not attracting canids.

“The takeaway is coyotes are part of this landscape,” Dmytryk said. “They were here before humans and they are here to stay. Since this land was colonized by pioneers, efforts to exterminate coyotes have continually failed while efforts to coexist with them have succeeded. We absolutely can reduce the presence of coyotes in Manhattan Beach. yo do so —  to change coyote behavior —  we have to change our own.”

She said it is not difficult to reduce coyote presence.

“It’s the people of this town who will ultimately drive the coyotes out,” she said, “by not drawing them in.”

“For someone who’s lived here for 56 years, I can tell you that something has changed, because I never saw a coyote until a couple years ago,” he said. “So something has changed, and I don’t think all the blame can be put on the residents here, and the food sources. I mean, have coyotes always been around the last 10,000 plus years in Southern California? Sure. Have they been here, though, in the last 100 years? I raise serious doubts about that. If they have been, they  hid themselves well…You know, other things have always been here too, though, and that includes outside cats, and feral cats, and outside feeding of cats, and it includes uncovered trash cans.”

Councilperson Suzanne Hadley was more than skeptical, both of Dmytryk’s report and her recommendations.

“By her own admission, she did field research for July 27th, 28th and 29th,” Hadley said. “So that’s three days of work, and I would submit that in three days, if somebody came looking for human crime in Manhattan Beach, they might not find it either. It doesn’t mean that it doesn’t exist…I guess my biggest disappointment in Rebecca’s report is there’s just a lot of resident blaming.”

Hadley recommended a trapping program like Torrance’s, which occurs five months a year.

“I agree with Rebecca. the people of this town will eventually drive the coyotes out of town,” she said. “I’m not looking to eliminate, eradicate, or celebrate the killing [of coyotes] or to persecute them, or be cruel here, but I do want some trapping. I want the numbers to go down…To me, they’re more like cockroaches and rats, which we’ve also been living with for a million years, or 10,000 years. But I don’t let rats come into my home, and it’s fair game for me to trap and kill them in my home. And I’m saying, in our community, I’m unwilling to have these predators that think they’re the apex predator that we can’t touch.”

Councilperson Joe Franklin also argued for trapping, largely from an abundance of caution. He expressed concern that the increasing presence of coyotes could lead to a human attack. Franklin said a coyote was captured on video running down the middle of the street he lives on with a dead cat in its mouth.

“It happened at 6:20 in the morning, and probably about 30 to 40 minutes later, that Street got a lot of traffic with kids on bikes, kids walking to school, kids with parents walking to school, babies and baby carriages, everything —  like Mayberry RFD right?” he said.

Councilperson Hildy Stern said organizations, ranging from California’s Department of Fish and Wildlife to the Humane Society, have all determined that trapping is ineffective and that the report submitted by Dmytryk offered straightforward solutions to reducing coyote presence.

Councilperson Richard Montgomery said the best course was to follow the science rather than a “knee jerk reaction,” based on emotions. He pointed to the actual confirmed sightings, which were 28 last year and 20 this year, with two confirmed dead cats due to coyote attacks, as less of a crisis than something the City needs to develop a systematic approach to.

“I have seen no proof that coyote trapping drives numbers down,” he said.”

Napolitano put the coyotes on probation, of a sort, directing the staff to continue its mitigation efforts, but also prepare to trap if need be.