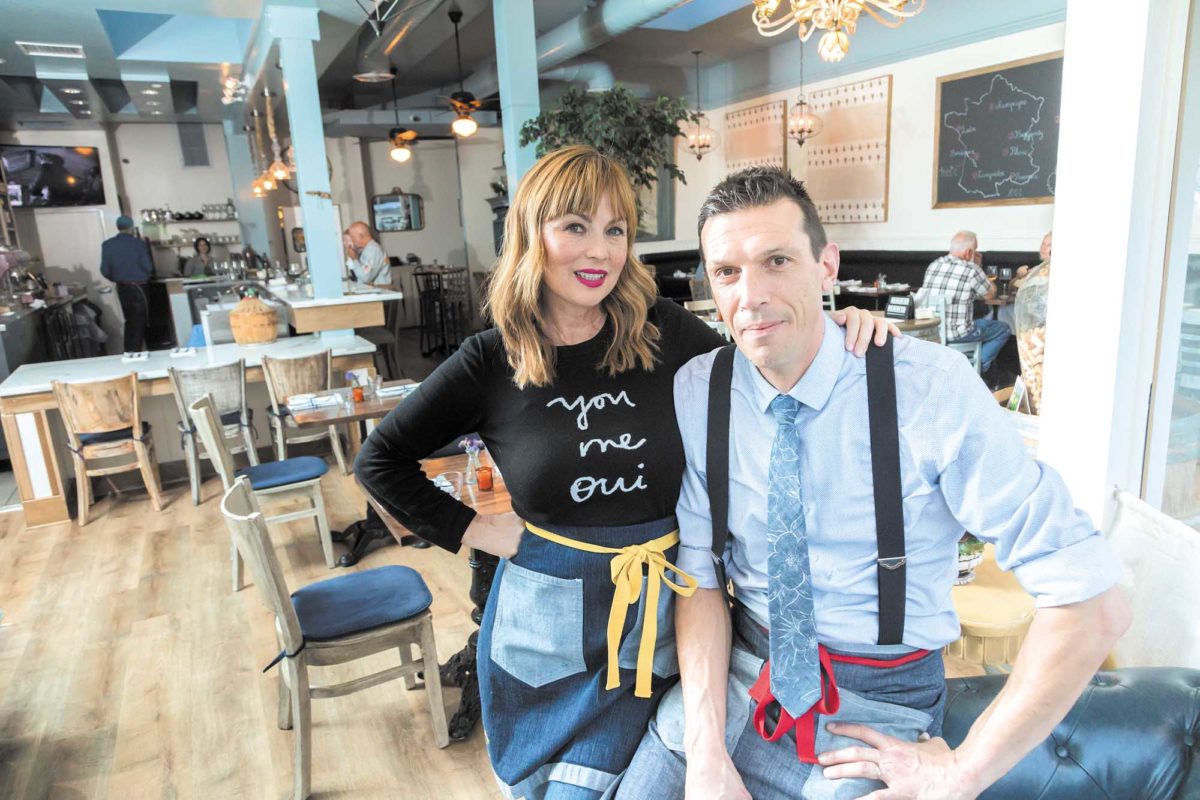 When I recommended a friend visit La Buvette, the French bistro that has been open since March in downtown San Pedro, she sounded interested but asked, “Will I have to dress up?” I reassured her that nobody has to get formal at any place that calls itself a bistro. The word is used for casual everyday eateries. On reflection, I’m hard-pressed to think of any restaurant in San Pedro where anyone would dress up unless a wedding or similar event was in process, but that old stereotype of the formal French restaurant refuses to die.

French people dress for everyday meals about the same as the rest of us. The staff at La Buvette does look snappy in their button-down shirts and traditional aprons, a uniform you might see in any Parisian café. It makes sense because La Buvette owner Thomas Compagnon aspires to a completely traditional experience, though not everything worked out that way.

Their first chef was brilliant but trained in a modern style, with a penchant for adding Asian accents to everything he made. His dishes came out of the kitchen with presentations that were beautiful, but they were subtly different from what might be served a village bistro. His successor is Steve Castillo, a Cordon Bleu graduate steeped in French technique during jobs at acclaimed restaurants around LA. Castillo’s presentations are pretty but not excessive, and his flavors are timeless.

At a recent dinner, we started with a roasted beet salad and a savory tomato, cheese, and mustard tart. Beet salads used to be a seasonal item, most popular in winter when good tomatoes weren’t available, but the vegetable has been growing in popularity in the last decade. The use of both red and golden beets with fresh strawberries made three kinds of sweetness to pair with the baby greens, blue cheese, and dressing, and a sprinkle of chopped pistachios and drizzle of dressing finished it nicely. 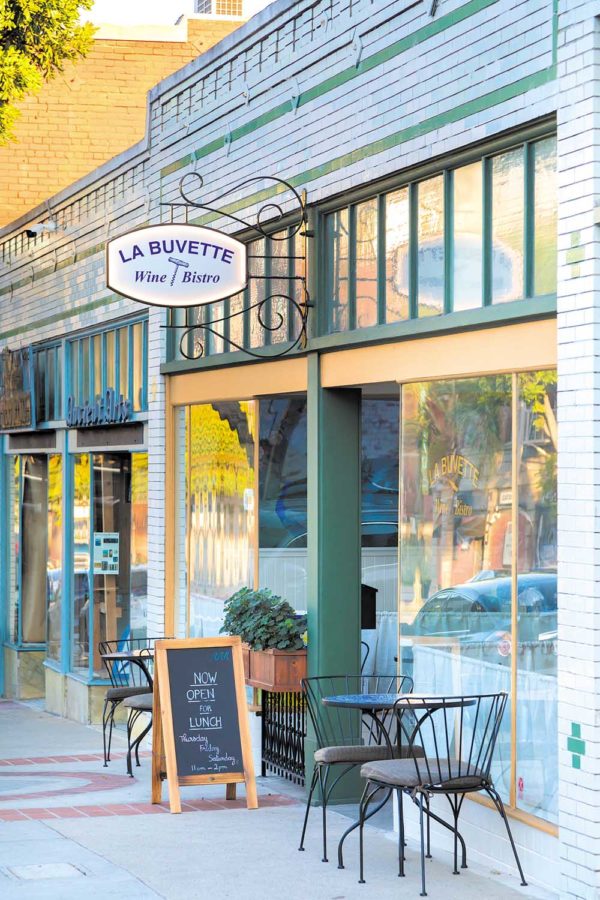 The frontage of La Buvette Bistro on 7th Street in San Pedro.

The tart was even simpler in concept but was a superb example of how good peasant cooking can be. The freshly made crust cradled a base of funky, aromatic gruyere. If you don’t like funky cheese this is not the thing to order, but if you do it’s a must. Over this is just enough whole grain mustard to add a dash of sharpness and vinegar, and the slices of tomato on top that are roasted and concentrated in the oven. A sprinkling of herbs makes it even more aromatic. After we finished the small tart and accompanying butter lettuce salad, I almost ordered another one, because it was that good.

For mains, I ordered an iconic dish, coq au vin, while my wife selected Chilean sea bass in a sage, wine, and cream sauce. (I’m assuming there was butter in that sauce too, because there was a silky richness to it that usually requires a bit more fat.) However it was made, it had a multilayered flavor that complemented the perfectly cooked fish. I should mention that you can forget any stereotype about dainty portions. The large filet was atop enough spinach and mashed potatoes to be satisfying but not overwhelming.

While the fish had been prettily presented, there was no attempt to gussy up the coq au vin, and that’s appropriate. This peasant dish was probably invented as a way to cook a tough old rooster to tenderness by braising it with onions, mushrooms, smoked pork, and red wine. It is made all around France but differs by region. I’ve had it in a sauce that was brick red and winey, with a strong overtone of garlic, and another that was almost black with the mushrooms taking center stage in the sauce. Here it was a deep brown and had a balance of mushroom and herbal flavors, the garlic and onions having merged in the stock to the point where there was more sweetness than sharpness. I detected a bit of nutmeg, just enough to add a background note. The braised chicken was served over pasta that had been cooked in the same stock. It was quite a full meal.

As is fitting for a place with a corkscrew on its sign, La Buvette has an impressive collection of French wines by the glass, and since we had the services of an expert sommelier, we asked Thomas to choose the wines for us. The Vacqueyras (a grape I had never heard of before) Rhone red was superb with the chicken, and though it was a “wine of the week” special I hope they keep it on the menu. The Saint-Veran had a light, crisp minerality and subtle stonefruit notes that complemented the fish elegantly. Thomas knows his cellar and this cuisine, so put your selection in his hands and get ready to learn.

For dessert, we had a lemon cloud, lemon curd with blackberry compote and meringue. This was a touch too sweet for me, but my wife happily ate my share. I would have liked it better paired with espresso or a glass of good vermouth. Without a bit of bitterness for contrast, I maxed out on the flavor. 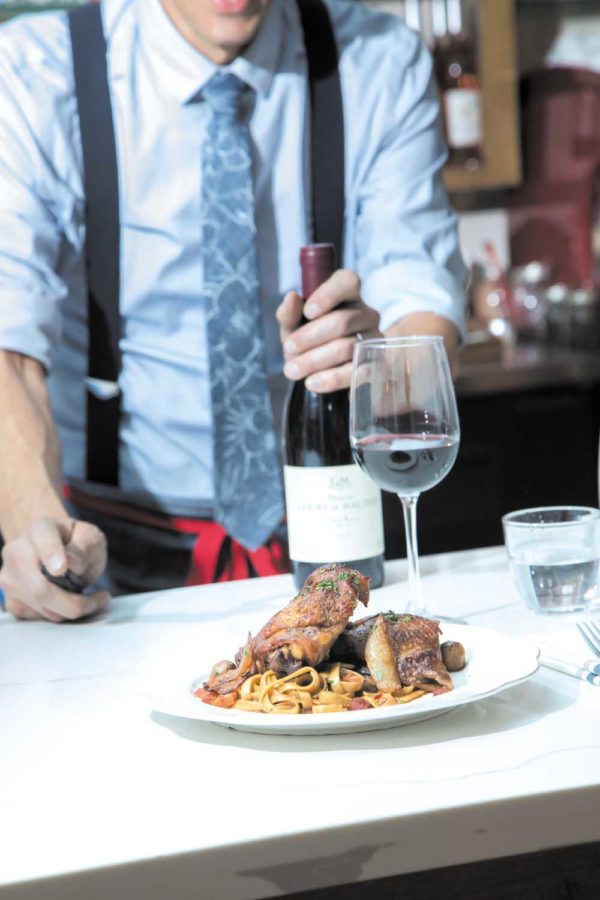 La Buvette’s Coq au Vin is a classic dish of chicken stewed in wine with bacon and mushrooms.

We returned a few days later for their “bubbles and bites” Sunday brunch, though since we didn’t have the Champagne the only bubbles were in the cream atop my wife’s latte. We began with some mini-croissants that had been par-baked in Paris and finished in the oven that morning, which sounded to me like a gimmick. I’ve been unimpressed by frozen dough pastries in the past, but either the technology of par-baking is getting better or they just do it right here. The layers of dough were flakey and crisp in both the plain and chocolate versions. We hardly touched the jam that was provided because they were so good by themselves. We were also served slices of bread from a local baker, which had dried fruit, nuts, and lavender baked in. I liked the nuts and fruit though the lavender was a bit overpowering. I would happily try more from this artisan.

We ordered the boursin cheese omelet and a sandwich called a croque monsieur, the latter a long-running joke in my family. On a trip to France several years ago my brother, who knew no French, could only remember how to order one thing, so any time he was in a café and couldn’t figure out the menu he got a croque monsieur. He happens to like ham and cheese sandwiches that are topped with cheese and then broiled, though by the end of a three-week trip he had an object lesson about why it’s a good idea to learn other languages. We tease him by ordering them when we’re together and they’re available, so I’ve had a fair sampling of them myself. The one here uses a flavorful and not overly salty ham with a soft cheese inside and melted gruyere on top. The pairing of cheeses makes the dish.

My wife’s two-egg omelet had enough herbed cheese inside to be satisfying, and together with the cheese potatoes gratin and small salad, it made a light, well-varied meal. If you’re used to American breakfast portions like overstuffed four-egg omelets with a mound of home fries on the side you may find the breakfasts on the small side, but we were comfortably full afterward.

Brunch for two with a latte and a small pot of French press ran $46, dinner with three glasses of wine $162, not typical San Pedro prices but this isn’t typical food either. La Buvette invests in high-quality ingredients and has the skill to enhance them to the utmost, which is why it’s fast becoming a destination for all who appreciate one of the world’s great cuisines.