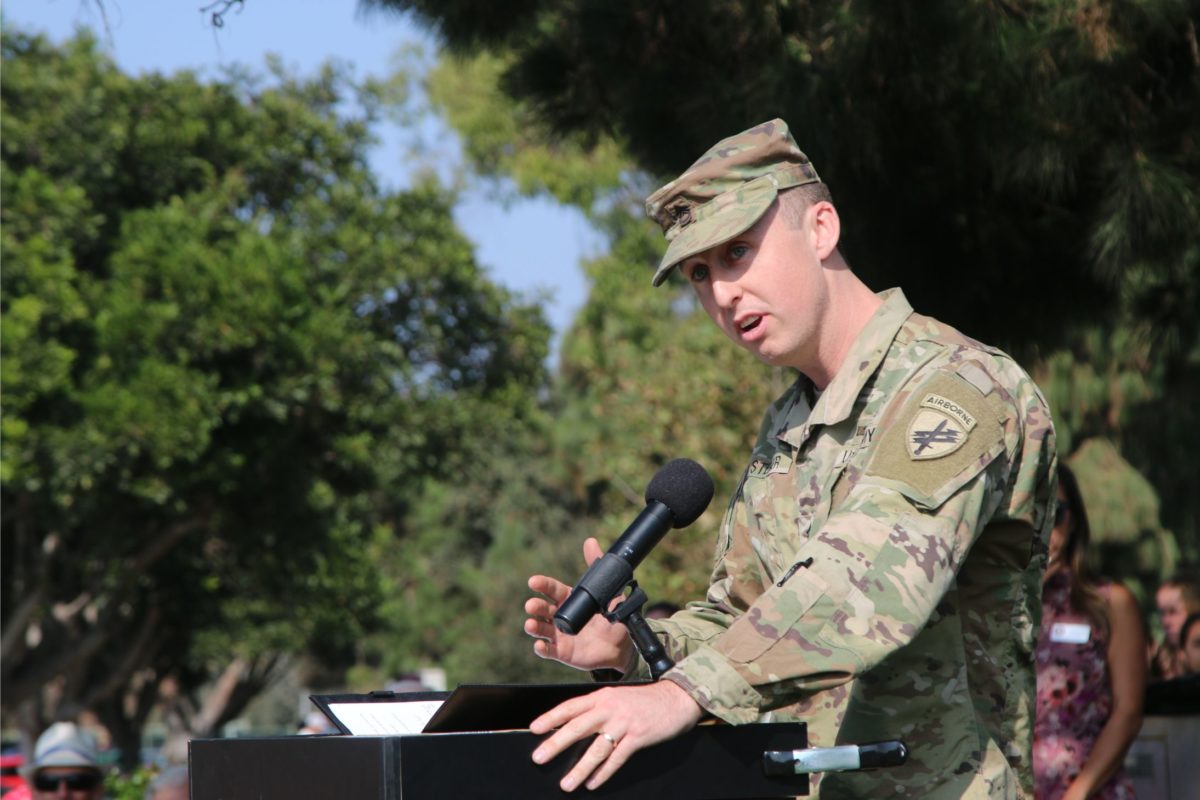 The 22nd annual Veteran’s Day Intergenerational Event lived up to its name Monday.

Cub Scout Troop #275 led the Pledge of Allegiance. The Manhattan Beach Middle School choir sang the Star-Spangled Banner. The MBPD Color Guard conducted a solemn Presentation of the Colors. Three Girl Scouts who have attended the ceremony 10 years straight spoke about what it meant to them. A Brownie Scout spoke about her great-grandfather, a Buffalo soldier who served in WWII and the Korean and Vietnam wars. An Iraq war veteran spoke about the relationship between our country and its military. Manhattan Beach Mayor Nancy Hersman remembered her father, who was a prisoner of war in WWII. And amidst an audience of a couple of hundred people, several military veterans stood proudly and accepted recognition from their community.

“We all need to remember, when we look at what we are so fortunate for in Manhattan Beach and certainly in our country, that we thank a veteran,” said Hersman in her closing remarks. “Without their service to our country, we would not have the prosperity and the freedoms that we enjoy in our nation today.”

Alex Chase, Georgia Bennett, Hannah Bergin represented Girl Scout Troop 8425 for their 10th and final year at the ceremony. All are graduating high school this year.

“Not only have we been able to spend this time appreciating our veterans, but we have also learned more about our gracious country and how to be better Girl Scouts. As we approach our 18th birthday, it is such an eye-opening realization that 18 is the age at which many of you committed to serving our country,” Chase said to the veterans in the crowd. “Serving our country is a lot to ask of an 18-year-old, requiring honesty and fairness, courage and strength, all to make the world a better place. As we reflect on our previous tributes, we have learned that saying thanks is more than just a thank you. It requires an understanding of what we are truly thankful for.”

Brownie Scout Ava Curley, from Meadows Brownie Scout Troop #9605, recalled her great-grandfather Albert Curley, who began his 28-year military career in WWII as Buffalo Soldier, the all-African American U.S. Army cavalry and infantry units formed from the late 1800s to the middle of the 1900s. He enlisted in 1940 when he was still a junior in high school. In a 2013 Army Times interview, Curley said he’d done so against his mother’s wishes.

“My mother wouldn’t — she refused to sign, saying I shouldn’t go to the Army; I should finish high school,” Curley said. “But my older brother signed the papers. He forged my mother’s signature. She chewed him out, but it was too late then.”

His great-granddaughter recalled that he was wounded in action when he “took out machine gun nests” in WWII, for which he received a Bronze Star for valor, as well as a Purple Heart.

The day’s keynote speaker was another Army veteran who’d joined against his parents’ wishes. Army Sgt. First Class Max Steiner recalled that he’d done as his parents wished and enrolled in a good college, George Washington University, but at the end of his freshman year in 2005 enlisted to go fight in Iraq. His mother hung up the phone when he told her.

“I realized I wasn’t where I really wanted to be, and it wasn’t really where America as a country needed me,” Steiner said. “2005 was a rough year for the US military; Iraq was looking less and less like ‘Mission Accomplished’ and the Army was having problems meeting its recruiting goals, even as it was trying to wage two counter-insurgency campaigns, in Iraq and Afghanistan.” 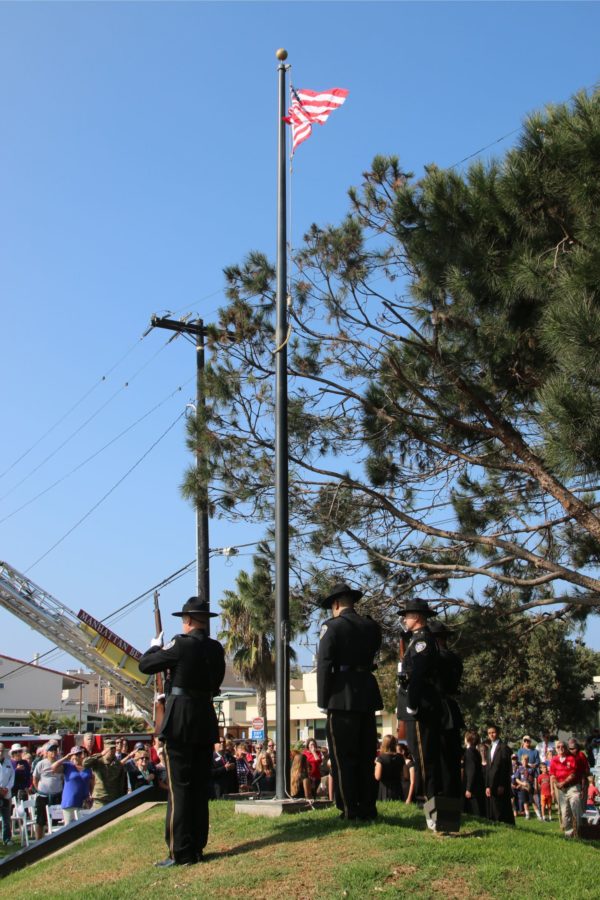 So in the week before finals, Steiner made what he called the “best decision of my life” when he walked to a recruiting station and told a “surprised but definitely accommodating” recruiter he wanted to enlist as an infantryman. He would serve two tours of duty in Iraq.

During his first tour, his unit sometimes was based out of the non-prison part of Abu Ghraib, the security complex outside Baghdad infamous as the site of torture conducted by Amerian military personnel. Steiner said his unit was not involved in the abuses that occurred but that what happened offered lessons for all.

“What happened in Abu Ghraib was wrong, and it was right for the American public to condemn the military and political establishment for allowing it to occur,” he said. “I hope that we as a country do not forget that it happened, because we cannot learn from a failure that we do not remember. Abu Ghraib offers another lesson, as well. War is messy, and it will never be Hollywood clean, no matter how much money or what high tech sensors or increasingly precise munitions we as a nation decide to throw at a problem. Wars are waged by good guys who are not perfect and by bad guys who are not caricatures of evil. It takes an observant and involved civilian population from the dispassionate remove of peaceful, beautiful cities like Manhattan Beach to ensure that the American military — your military — wages war in the interest of American values, your values.”

After his active duty, Steiner attended the University of California at Berkeley, then worked as a diplomat for the U.S. State Department in Honduras, Mexico, Egypt, and Washington D.C. He serves as an Army reserve and is pursuing his Ph.D. In closing, he urged citizens to actively engage in democracy.

“Many Americans did not support the wars the troop’s fight or the national security decisions of the political establishment that the military serves,” he said. “This is great. Please protest. Please vote. I am proud to serve in a military that protects a society with the freedom to peaceably assemble and openly air its grievances. Nothing makes me prouder as soldier than to see Americans exercising their political rights.”

Steiner ended with a cautionary note.

“We’ve been at war for 18 years,” he said. “Veteran’s Day originally marked the end of WWI, which lasted four years, and only two years for the United States. We invaded Afghanistan in 2001. America does not feel at war, and I am both proud of and worried about this fact. I hope that America is not entering an era of forever wars where we as Americans are too insulated from the costs of war to ever stop fighting them.”

“I am very proud of my military service and very grateful for the ceremony today, but I hope that we do not forget that there are American soldiers serving overseas now, with sand in their clothing and rounds in their weapons, who have never known an America that wasn’t at war. That gives me pause. I am asking you today to think about what that means about us as a country.”