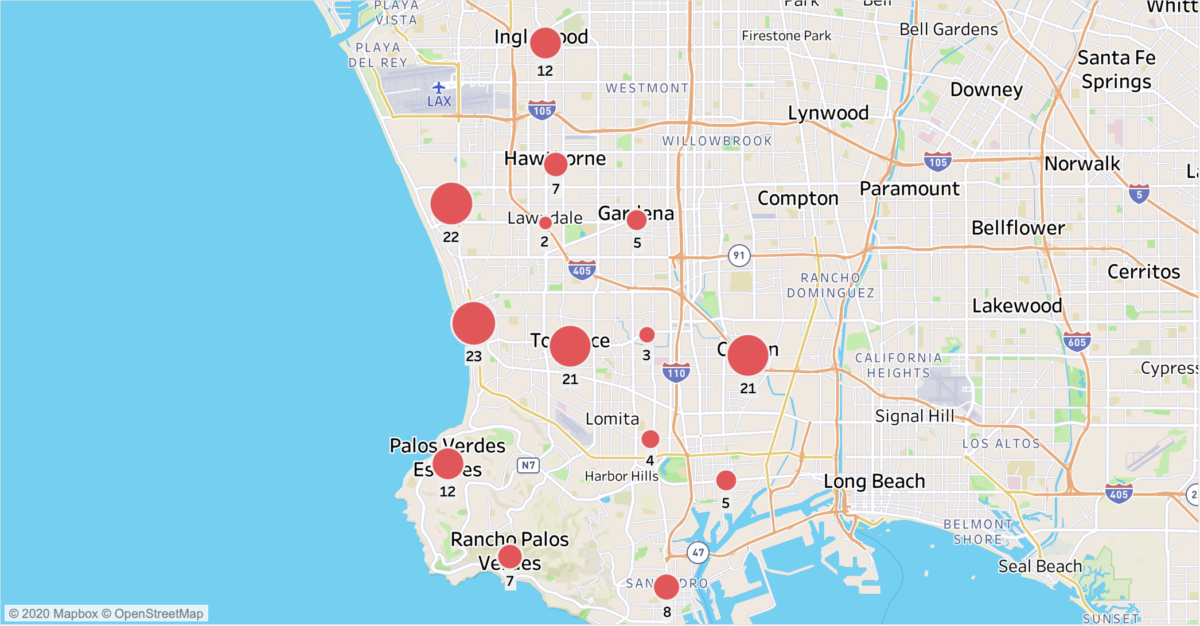 The number of novel coronavirus cases in Los Angeles County has increased from 409 to 1,465 in less than a week, Barbara Ferrer, director of the county Department of Public Health reported today. The cases include 26 deaths, five of them reported in the last 24 hours.

Ferrer expects the number of cases in Los Angeles County to at least double every four to six days over the next several weeks.

“We need more data points for our models to be as useful as we want them to be. But I don’t think it’s unreasonable to expect that we have another couple weeks, maybe even three weeks, of numbers increasing here in L.A. County,” Ferrer said.

There were 257 new cases of COVID-19, the disease caused by the coronavirus, reported on Friday, Ferrer said. That marks a significant decrease from the 421 new cases reported that were reported Thursday. But Ferrer said the decline does not mean the spread of the virus is slowing. Instead, it reflects the uneven flow of information from labs that have more recently come online, including numbers from private testing companies like Quest Diagnostics. Looking at the numbers over a span of several days is more accurate, she said, and reveals a concerning spread.

“We’ve more than tripled the number of people (testing positive for the disease)” in the last six days, Ferrer said. “This increase in part reflects improved access to testing. We also have to assume that these numbers represent the very real fact that a lot more people in the county are capable of infecting others.”

Los Angeles County, Ferrer said multiple times, is behind in testing relative to other areas of the country that have been hard hit, including New York City. So far, there have been almost 11,000 people tested in the county, a number Ferrer expects to rapidly increase. As of now, however, limitations on testing availability mean the county is asking that people be symptomatic, and that their provider determines that it’s “clinically important” for the person to be tested.

Authorities also announced Friday that all county beaches would be closed, part of an escalating effort to encourage residents to maintain “social distancing” and avoid congregating, and hastening the spread of the virus. Unlike many other common diseases, including the seasonal influenza, there is no known immunity in the population to the coronavirus, which Ferrer said increases the ease that it can spread when people are in close proximity.

“Without slowing the spread, we could easily overwhelm the healthcare system in Los Angeles County and everywhere in California,” Ferrer said.

The Beach Cities have reported 45 cases so far: 22 in Manhattan Beach and Hermosa Beach, and 23 in Redondo Beach. Some of the cases in Redondo are from The Kensington, an assisted living facility that is one of three in the county with three or more confirmed cases of COVID-19, Ferrer said. Kensington staff, residents and their family members have been notified that “there is an outbreak,” Ferrer said, but she declined to place blame on the practices of Kensington or the other two locations.

“I want to note that there have been no deficiencies identified at these facilities. Staff and the managers are doing their very best to protect the health of their residents. It’s unfortunate that this virus knows no boundaries. It can be imported and exported wherever there are people,” Ferrer said.

The cases at Kensington and other institutional settings are alarming because COVID-19 strikes the elderly with particular ferocity. Although the vast majority of infections so far have been among people who are under 65, almost all of those who have died are over 65.

The experience with patients who have been hospitalized has so far confirmed public health authorities’ fears that the disease will take a toll on the county’s network of medical facilities. As of Friday morning, there were 70 people hospitalized with COVID-19 in the county, Ferrer said, and almost 70 percent of them were in intensive care units (ICUs). The majority of the ICU beds in the state are already full. In Italy, where the spread of virus intensified earlier, doctors are reporting that a lack of ICU beds has resulted in patients on mattresses sprawled across hospital floors.

Some relief may be coming with the arrival of the USNS Mercy, a hospital ship that docked earlier in the day at the port of Los Angeles. The ship, which holds more than 1,000 hospital beds and sails with a crew of more than 800 Naval Medical personnel, will be used to treat people without COVID-19, but who still require hospitalization, freeing up area hospital beds. Supervisor Kathryn Barger called it “a critical resource for the Los Angeles County community while we prepare for a surge in our hospitals.”

An analysis released yesterday from the Institute for Health Metrics and Evaluation at the University of Washington Medical School predicted that cases of COVID-19 would peak in California on April 24, and that under that scenario, the state would face a shortage of 299 ICU beds. Asked about the study, Ferrer said that its conclusions sounded reasonable, but that testing limitations made it impossible to say for certain.