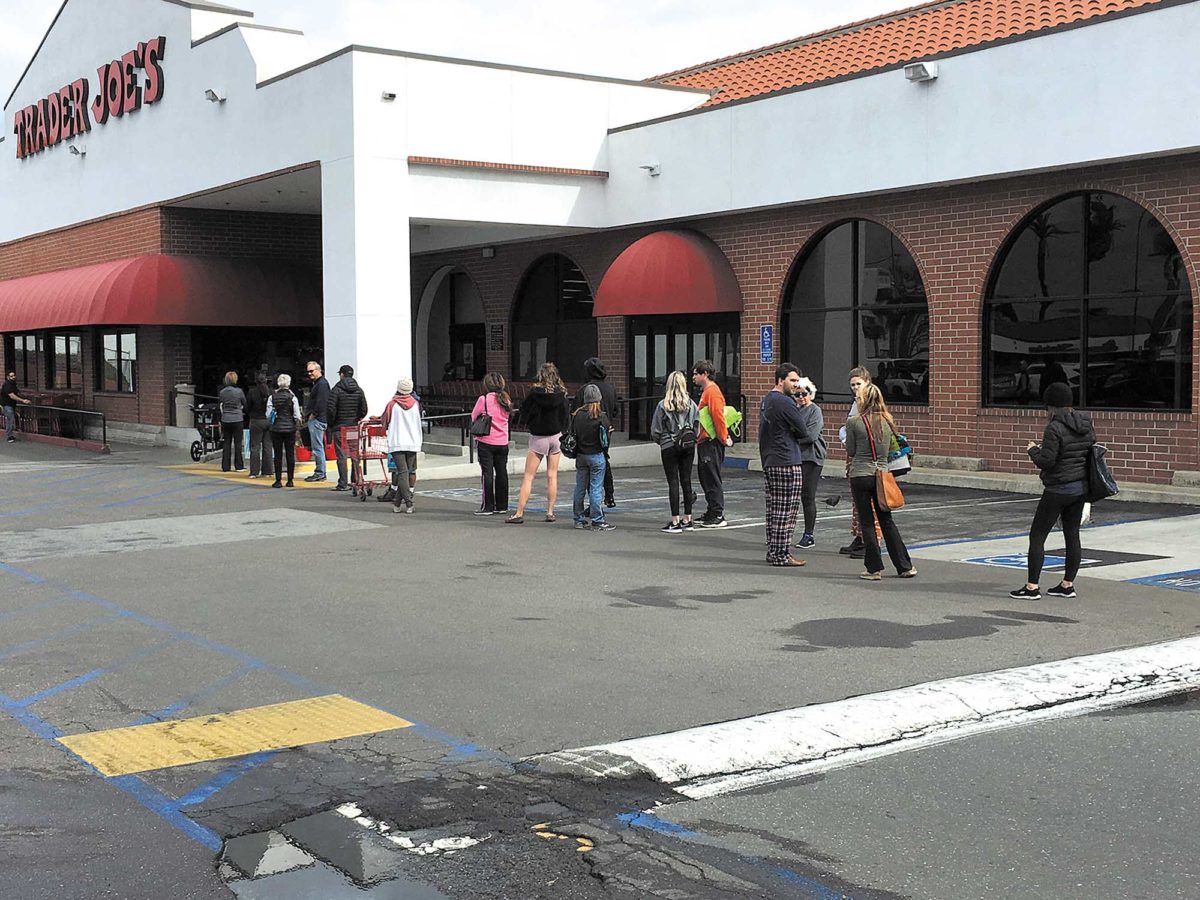 As authorities delivered grim warnings about the novel coronavirus last Thursday, an idea spread among South Bay residents with the force and quickness of a contagion: buy toilet paper.

Mirroring trends across the country, shoppers late last week began descending on Vons, Trader Joe’s, Ralphs, Whole Foods and other area stores, creating long lines, packed parking lots, shortages of certain items, and frayed nerves. Stores responded by cutting back hours to give more time to clean and restock, limiting the amount of particular items a customer may purchase, and, in some cases, limiting the number of people allowed inside at one time.

That was the strategy Trader Joe’s started deploying Monday morning, when a line stretched into the parking lot. An employee stood at the store’s entrance, letting in one shopper for each one that exited. Customers waiting in the line said they were told by employees that the store was trying to limit the store’s occupancy to 50 people, in line with guidance offered by Gov. Gavin Newsom the day before.

Kenya Friend-Daniel, public relations director for Trader Joe’s, did not respond to questions about the policy. In an email, she pointed to a page on the store’s website, which did not address increased demand or supply shortages.

Other chains have been more upfront, saying there is no threat to the supply lines on which they depend, and hence no reason to make unusually large purchases. The increased number of trips customers are making to find out-of-stock goods, however, and the long lines they confront when they do, create an added risk of infection.

“Hoarding is hurting our community. Your behavior isn’t just bad, it could cost somebody their life,” Kendra Doyel, vice president of merchandising for Ralphs, said in a news conference on Monday.

She and other representatives from area grocery stores flanked Los Angeles Mayor Eric Garcetti at an appearance intended to discourage Southern California residents from hoarding. They spoke at a massive Ralphs distribution warehouse in Paramount, with multiple floors of packaged goods stretching as far as the eye could see. Unlike restaurants, which are closed or limited in their operations, public health officials have said grocery stores are among the essential businesses that will remain open during the pandemic. And in sharp contrast to the light traffic that has followed the virus-induced economic slowdown, the warehouse on Monday hummed with activity. Forklifts rolled along with intricately stacked pallets of goods, while freight elevators whirred up and down.

“I’m here to reassure folks that we don’t just have food for days or weeks, but months, and that will continue unabated,” Garcetti said.

Along with long lines and shortages, concerns about supplies have prompted some reports of disputes. A video of two women in Australia fighting over toilet paper, which went viral on YouTube, is believed to have partially inspired the run on toilet paper.

Officer Chris Iniguez of the Manhattan Beach Police Department said officers there have responded multiple times to grocery stores in the area over the past week to calls about “disturbances.”

“There have been several disturbance-related calls at grocery stores. That could mean anything from a customer yelling at staff, or it could mean customers getting into arguments,” Iniguez said.

He was unable to answer questions about specific incidents, because increased concern about the virus had caused the department to step up patrol shifts and had kept him away from his desk. He said there were no plans to station officers at grocery stores, and that officers could be there “in a minute” if needed.

In a shop steward conference call Saturday evening put on by the United Food and Commercial Workers Local 770, which represents some South Bay grocery store workers, an employee who identified himself as Gerald expressed concern about customer behavior.

“They’re becoming irate, if not hostile. We’ve all seen what happens on Black Friday,” he said.

Store management, in contrast, said behavior in South Bay stores has mostly been problem free. Joe Ragusa, vice president of marketing for Lazy Acres, also said that customers had been “calm and considerate.”

“I think they understand that we are in this together, and that our team members are doing the best they can during unprecedented times,” Ragusa said in an email.

Ian Mooney, manager of the Hermosa Beach Vons, also said he was pleased with how customers have behaved.

“I have heard horror stories at other grocery stores nationwide and you have been nothing but understanding and patient,” Mooney wrote in a post on the Nextdoor app over the weekend.

Stores have altered their operations in response to the surge in demand. Grow in Manhattan Beach announced that its first hour of operation, from 8 to 9 a.m., would be restricted to the elderly, pregnant women and those with compromised immune systems. The store has also been providing email updates about restocking and the availability of particular items.

Gelson’s and Vons also announced that their first hours of operation would be limited to those over 65. Customers Wednesday morning reported that a person stood at the front door of Vons checking IDs to ensure that those attempting to enter during the set aside time were of age.

Those hoping to find shorter lines and more spacious aisles by coming late at night will also be turned away, with many stores modifying their hours. Liz Torres, a supervisor at Vons in Hermosa, said on Nextdoor the store was changing its hours to 7 a.m. to 9 p.m. in order to give the store’s employees more time to restock and clean the store. (The store typically is open from 6 a.m. to 2 a.m.)

Ragusa, of Lazy Acres, said the store had cut its hours to give employees more time to restock. Along with toilet paper and hand sanitizer, shelf-stable items like pasta and sauce, canned beans and soups, and frozen items have been quick to disappear. Bottled water has also gone quickly.

“Based on what stores are experiencing, the items customers are buying are very similar to what you would see in times of a disaster,” said Melissa Hill, director public affairs and government relations for Albertsons, which also owns the Vons and Pavilions brands.

Hill, who has worked in grocery stores in Texas and on the East Coast during hurricanes, said she understands customers are worried. But unlike those situations, the coronavirus presents no threat to critical infrastructure like the roads on which delivery trucks drive, or the municipal water systems that keep faucets flowing.

“What’s different is the impact to the supply chain. We’re not having power outages. That brings a whole different level of challenges,” she said.

Store representatives said the fact that a store is out of a particular item does not mean it is unable to get more. Most items will be restocked in a few days or within a week. (Hand sanitizer, which is also in demand by medical providers, could take several weeks to reload.)

“Although we are a little bit behind on stocking some shelves, it’s not a supply problem, it’s really a people problem, of getting that product to the shelves,” Rob McDougal, president and CEO of Gelson’s, said at Monday’s conference.

The heightened demand has made grocery stores one of the bright spots amid a darkening economic forecast. Representatives from the Albertsons and Ralphs companies both said their stores are trying to ramp up staffing, and urged those who may have lost work in the service industry to fill out applications on their websites.

Unions, meanwhile, are trying to ensure healthful conditions inside stores to protect workers and ensure they remain able to continue providing groceries. Employees have reported working extended hours and find it hard to take mandated breaks with the constant stream of shoppers. John Grant, president of UFCW Local 770, said on the weekend conference call he was urging store management to work with employees and local officials to ensure precautions are followed.

“There is probably no place right now where you can find more people congregating than a grocery store,” Grant said.