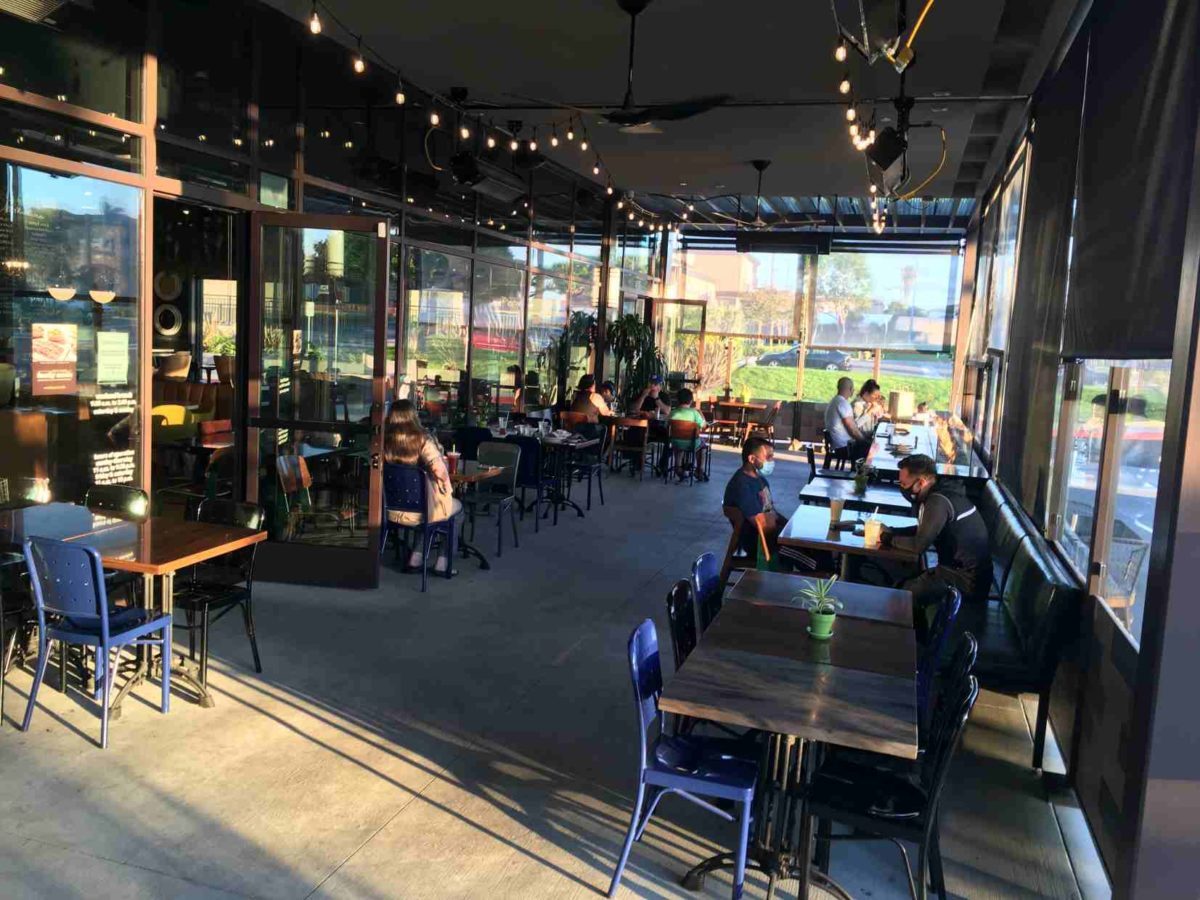 Many years ago I worked at a company that did business with a commercial printer. It was here I first saw a tattered sign by the counter that read, “Good, fast, or cheap – pick any two.” When we came in with a request for something outrageous, like a thousand color brochures to be printed and folded by the next day, the owner jerked his thumb in the direction of the sign to indicate that it might be possible, but we weren’t going to like the bill.

The sign seems to date from the 1930s, but it wouldn’t surprise me to find that slogan scrawled on a shop wall in Pompeii. There are exceptions in the restaurant world, because I can call to mind many examples of good fast food that was kind to my wallet. This was usually from mom and pop cafés, farmers market stalls, and other budget dining emporia rather than from corporate entities. Little local places think more about pleasing their customers and less about pleasing the cash counters in the accounting department.

Corporate restaurants in shopping malls aren’t places you’d expect to find this experience, because the rents are generally expensive and menus designed to extract the maximum amount of money from passing shoppers. There are exceptions, and Urban Plates is one of them. This chain, which has local outposts in Manhattan Beach and Torrance, started nine years ago in San Diego with the motto, “Good is served.” Their ambition is to provide freshly prepared food that is organically grown, and to do it at a modest price. Since organic produce is generally more expensive and less readily available than conventionally farmed varieties, this is a challenge in both logistics and economics.

The concept behind the menu is to provide a wide variety of vegetables, a narrower list of proteins, and to combine them in as many ways as possible. You can get your steak, chicken, fish, or tofu as a salad, bowl, plate, or sandwich, or you can forget those center-of-the-plate items entirely and order a sampler of side dishes. This method of dining is said to be the most popular option, and I saw several tables where diners did exactly that. One was mine, because my wife was in the mood for the combination of beets with goat cheese, a bowl of mac and cheese, and a fruit salad. The mac and cheese had a full-flavored sauce without a top crust, and though I prefer the baked version for texture and flavor I have to admit this was pretty good. The other two items were wholesome dishes properly prepared, and along with the garlic toast that comes with just about everything it was a well-proportioned meal. 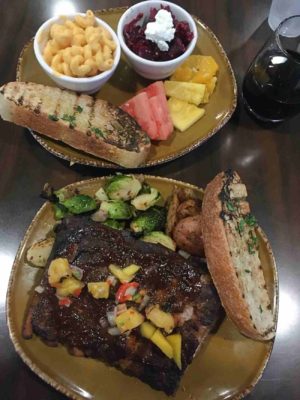 The pork rib seasonal special and one of the popular trio plates.

While my wife was enjoying that virtuous meal, I was tucking into pork ribs that had been fruit glazed and then topped with mango-habanero salsa, with sides of roasted brussels sprouts and Old Bay potatoes. The habanero was used sparingly and provided a clean bright heat alongside the fruit, and the ribs themselves were meaty, lean, and tender. They don’t have a smoky flavor or grill char, but that suits this style of seasoning well. At seventeen bucks for a large portion with two sides, they’re a deal. The sides were good too, the roasted red potatoes tangy with Maryland’s finest seasoning, the brussels sprouts lightly caramelized along with some turkey bacon.

On our next trip my wife ordered a chicken Cobb salad and a cup of tomato-basil soup, while I tried one of their more upscale items, the seared ahi tuna. The tomato soup had a pretty swirl of pesto and a pair of crisp croutons, a simple mix of bright flavors. Since I grow tomatoes and basil at home I’m going to practice making one just like it, and if it’s this good I will have hit my mark. The chicken cobb was a slightly stripped-down version of the classic without the usual bacon and minus the fancy presentation with parallel rows of toppings. The flavor balance was close to the traditional version because the chicken had been seasoned and had some grill flavor, and they didn’t stint on the blue cheese and an unusually flavorful version of cool ranch dressing. Overall, it was a success.

The Ahi tuna plate was a near miss rather than a hit. The seared broccolini was fine with a little blistering from the grill, but after that things went downhill. The fish was pretty and properly seared, but had been crusted with an excessive amount of salt, and the brown rice that was the suggested accompaniment was a bit overcooked and dry. Neither was far enough from the mark to warrant sending it back, but it wasn’t as good as everything else we’ve gotten here. 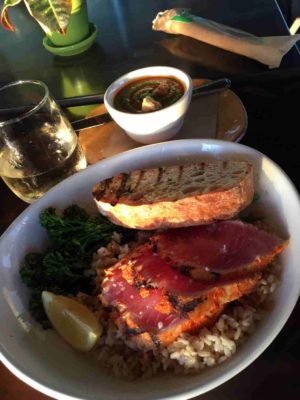 Urban Plates’ ahi tuna is served with seared broccolini and brown rice by default, but you may choose other sides.

A variety of wines, beers, juices, kombucha, and other beverages are available to complement meals, and I have to commend the thought they put into having interesting selections for those who do not drink alcohol.

We tried two desserts, the chocolate cake that came prettily decorated with a hibiscus flower, and a banana cream tart with a graham cracker crust. The cake had a good balance between bitter chocolate and sweet frosting, though still a little more sugary than I prefer. The banana cream tart on the other hand was first rate, more fruity-sweet then sugar sweet and topped with a little flaked chocolate that finished it nicely. There are other things on the menu that I will undoubtedly order on future visits, but I think I will always order this to finish the meal.

On both visits to Urban Plates, substantial and flavorful meals ran less than $20 per person, and service on their patio was quick thanks to a friendly and helpful staff. Good, fast, cheap, and corporate? You don’t see it often, but this is proof it can be done.