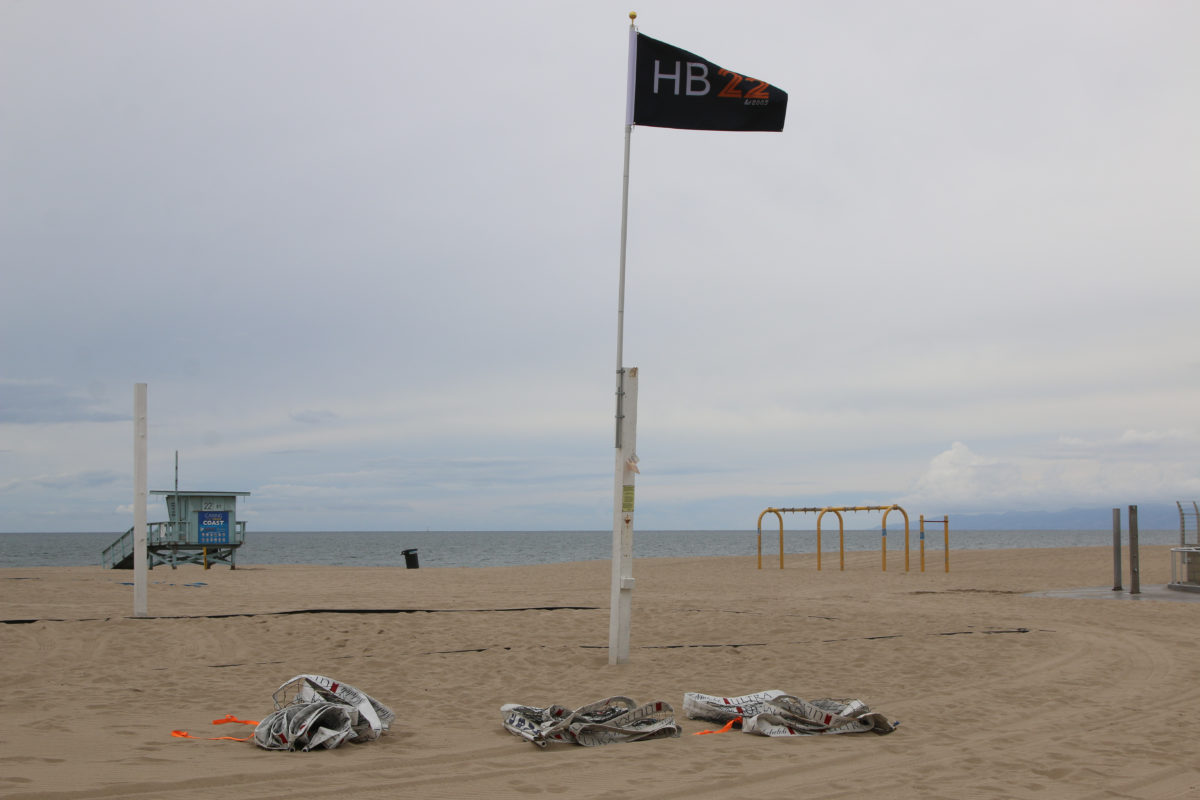 Los Angeles County followed up on its removal of beach volleyball nets last week by closing county beaches this week. Hermosa, where this volleyball court is located, also closed its beach this week. Photo

Los Angeles County followed up on its removal of beach volleyball nets last week by closing county beaches this week. Hermosa, where this volleyball court is located, also closed its beach this week. Photo

Beaches in the South Bay and the rest of Los Angeles County will be closed until April 19 in an effort to slow the spread of the novel coronavirus, authorities announced Friday.

Along with beaches, beach access points, including the Marvin Braude Bike Trail , will be closed, as will hiking trails throughout the county. Authorities said that the dramatic steps are needed because of residents’ failure to heed previous warnings about the need to socially distance.

“I know how hard this is. I know how isolated everyone feels. But we’re in this together,” said Dr. Barbara Ferrer, director of the County Department of Public Health. “We do it well, and we stand a chance of slowing the spread. We don’t do it well, and our numbers can exponentially grow each and everyday.”

State and local authorities have been urging residents to avoid contact with people outside of those living in their homes to slow the transmission of the virus. The goal is to limit the number of cases of COVID-19, the disease caused by the coronavirus, that emerge at any given time, to prevent hospitals from being overwhelmed.

Despite closing all but essential businesses, however, people have continued to congregate outdoors in ways that make it impossible to maintain the recommended “social distance” of six feet. Last weekend, balmy temperatures and abundant sunshine drew people to beaches and trails, packing The Strand in Manhattan Beach and Hermosa Beach, and creating conditions that facilitated the spread of the virus.

“The crowds we saw at our beaches last weekend were unacceptable,” said County Supervisor Janice Hahn, who represents the Fourth District, which includes the Beach Cities. “In order to save lives, beaches in L.A. County will be temporarily closed. I understand this is a huge sacrifice for everyone who enjoys going to our beaches. But we cannot risk another sunny weekend with crowds at the beach spreading the virus.”

The decision follows similar closure orders elsewhere in California and around the world. Beaches in Spain have been closed for more than two weeks. San Diego Mayor Kevin Faulconer closed beaches there earlier this week. On Wednesday, Hermosa announced it would close its own municipally-owned beach. It also cited a desire to prevent a repeat of last weekend’s throngs of people on The Strand and sand. According to Michael McCrary, interim chief of the Hermosa Beach Police Department, lifeguards estimated 22,000 people visited the city’s beaches last weekend.

Hermosa did not provide a date on which the temporary closures would be lifted. But in discussions of potential closures earlier this week, officials said it was unlikely a particular beach would open while others remain closed, for fear of people surging to the lone open slice of sand.

Gary Jones, director of the Los Angeles County Department of Beaches and Harbors, said his department would be working with lifeguards, which are a division of the county Fire Department, as well as the patchwork of local governments that cover the more than 25 miles of the county’s coast.

“The coastline is long. There are obviously lots of access points to the beaches. We really need to make sure people follow this order and realize it is for all of our benefit,” he said.

Given the size of the area to patrol, Ferrer said that limiting access to the beaches will depend more on the residents internalizing the seriousness of the situation than on phalanxes of authorities stopping them from coming. Jones left the press conference without providing details on how enforcement of the beach closures would work. Before leaving, he said that along with governments, he would be working with the Sheriff’s Department and municipal police forces, but it is not clear what kinds of penalties await violators. Beaches and Harbors also has code enforcement officers with the power to issue tickets. McCrary said Wednesday that, in Hermosa, people entering the beach could receive citations or misdemeanors, but that HBPD would primarily be relying on education and warnings. Various surfing websites have reported that people attempting to surf at breaks within the city of San Diego have received hefty fines.

South Bay surf legend Mike Purpus got some idea of what may be in store while walking down Knob Hill Avenue from his Redondo Beach apartment Friday.

“I walked across the street to check the waves. I sat down on the wall, and I wasn’t even there for 10 seconds when a policeman comes up on a motorcycle and said, ‘There’s no surfing today Purpus, don’t even think about it: The beach is closed,’” he said.