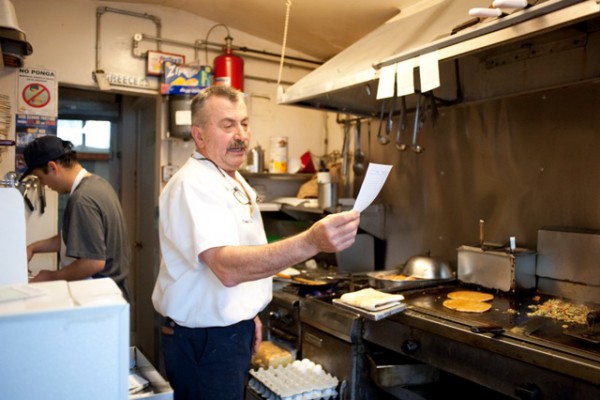 George Anagostu, the owner of the Cozy Cafe, checks a breakfast order. Photo by Chelsea Sektnan.

When I mentioned to friends that I planned to review the Cozy Cafe, most said they had always wondered about it, but never eaten there. Some asked if an optical illusion is involved; it has to be bigger than it looks, doesn’t it?

The tiny, box-shaped building on Pacific Coast Highway in Redondo Beach, just south of Torrance Boulevard was a barber shop before becoming a restaurant four decades ago.

Cozy Café sport a grand total of nine seats around a u-shaped counter. There is a covered patio in back that seats twice that number comfortably. But the total seating area is still smaller than the waiting area for many beach restaurants. Both areas have their charm, but I prefer the inside just because it transports you so completely to the era of roadside diners and mom and pop cafes. 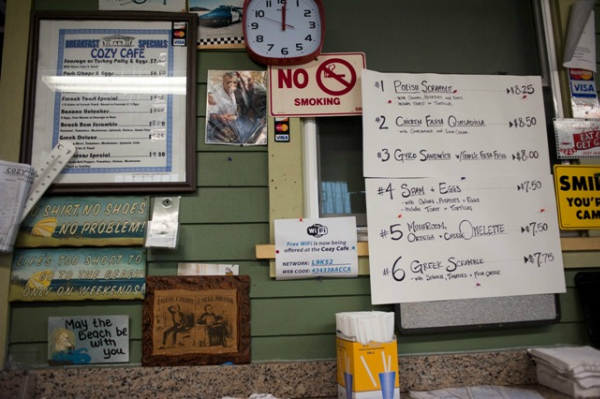 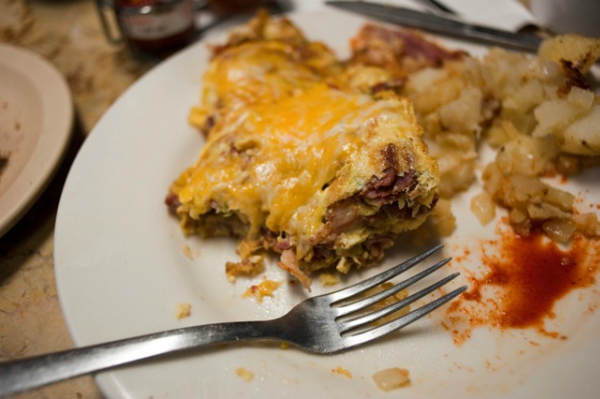 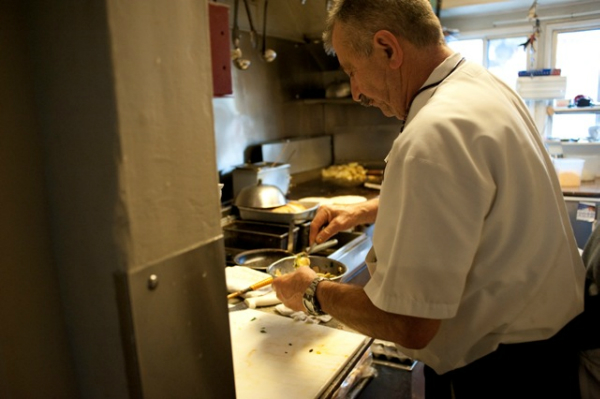 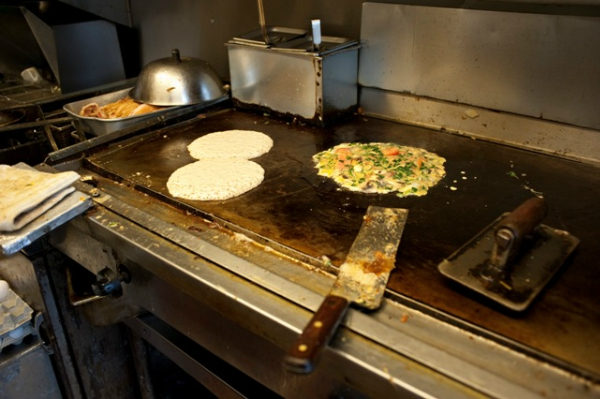 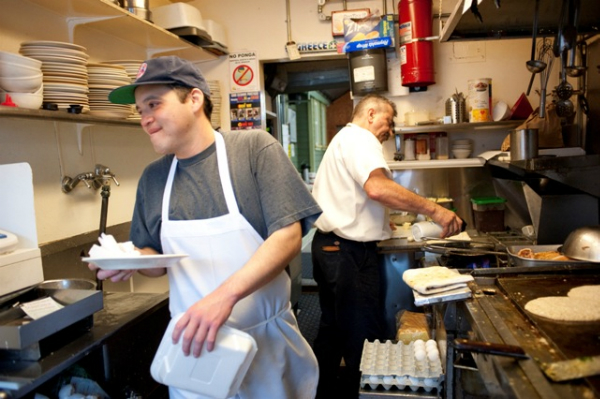 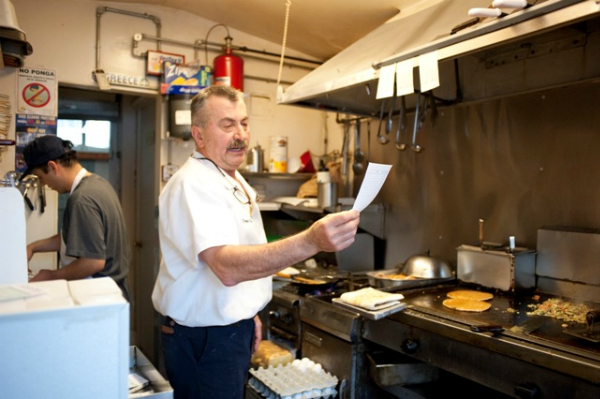 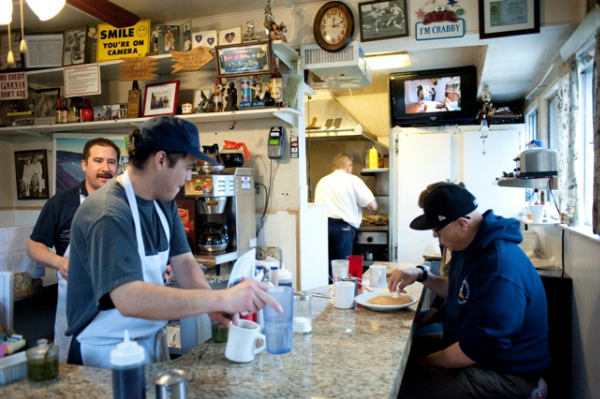 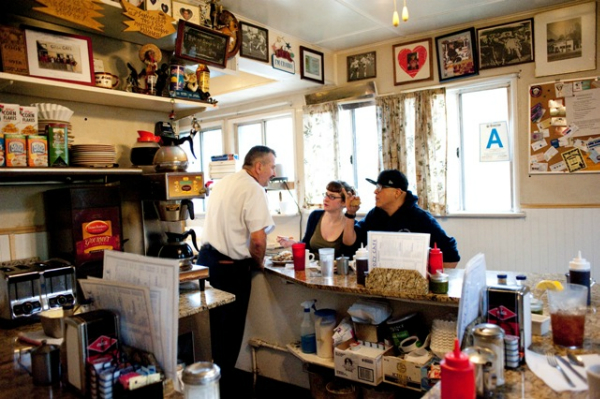 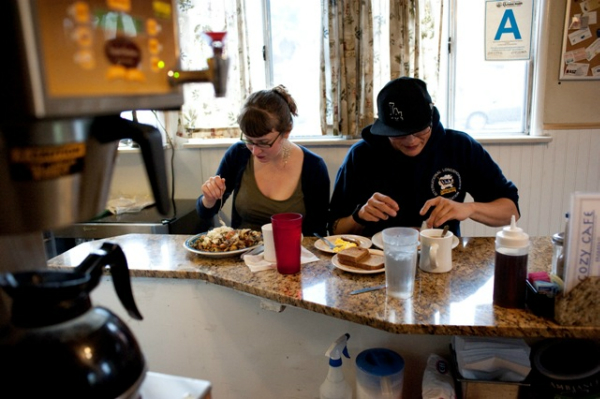 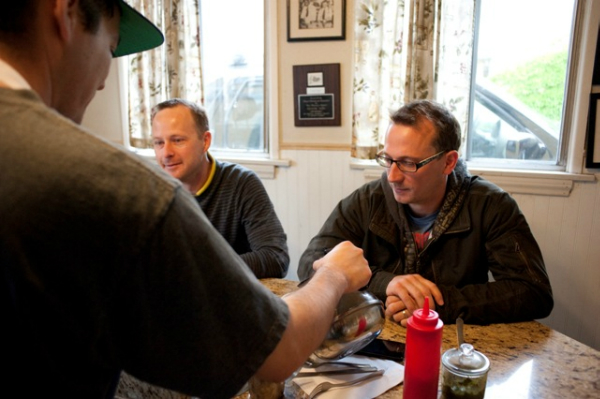 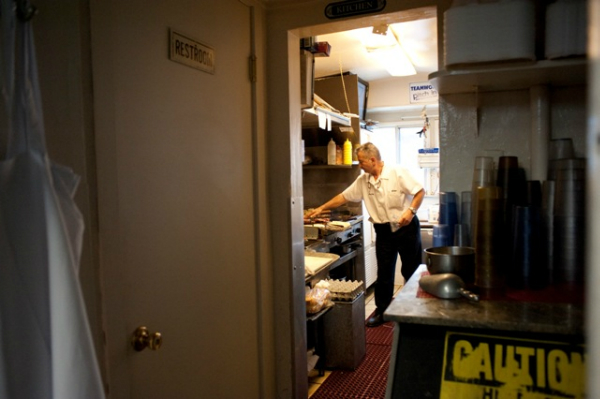 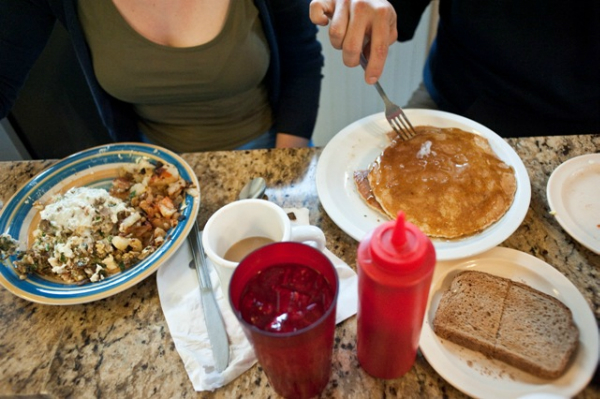 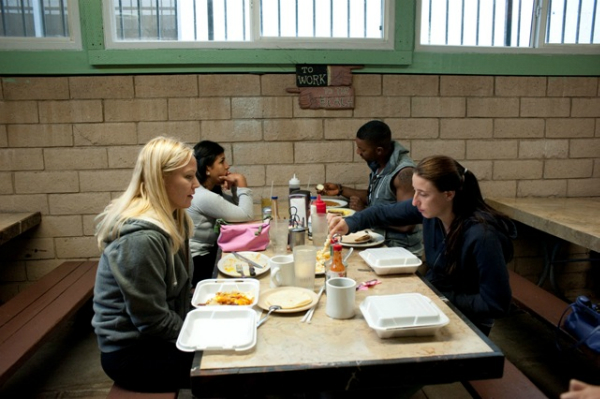 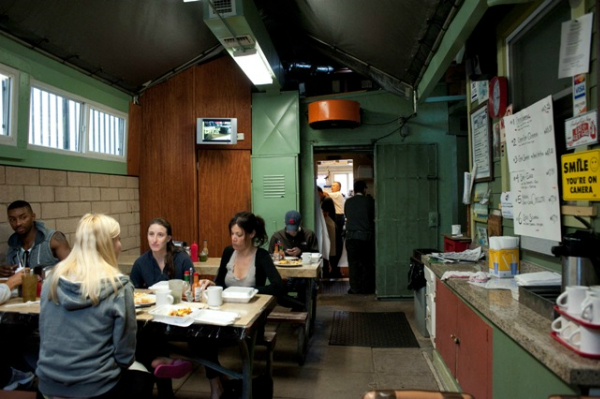 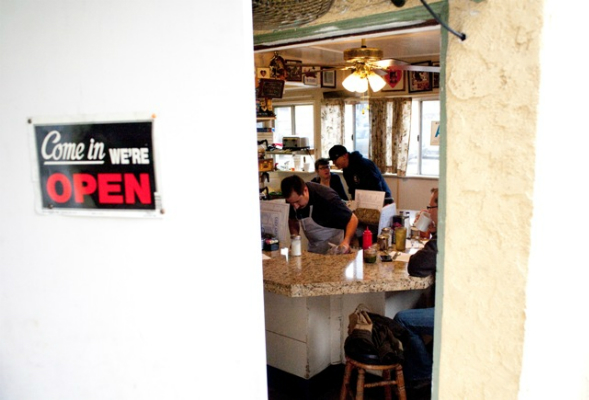 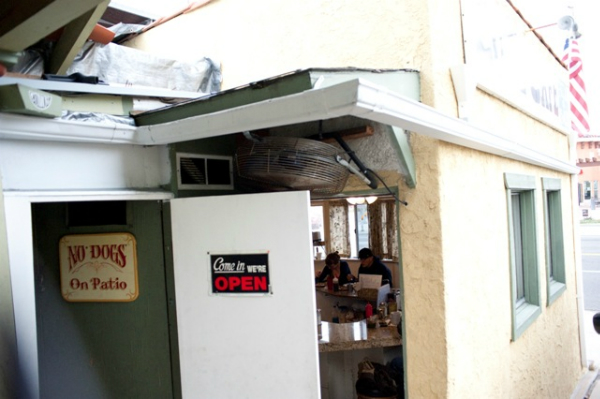 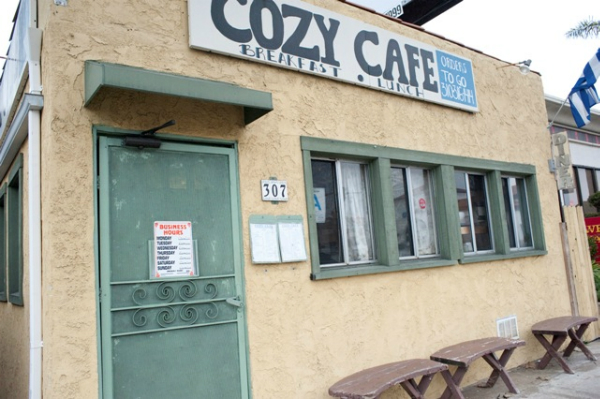 Pop is George Anagostu, who has run the place since it was converted from a barbershop. He is proud of his Greek heritage, evidenced by the blue and white flag flying outside and a few items on the menu.

On my first visit I tried a Greek Deluxe omelette with gyro meat, mushrooms, feta, cheese, tomato, and tzatziki sauce. My companion ordered the Cozy omelette with turkey, mushroom, and cheese. The Cozy was standard but tasty, a big breakfast with an impressive mound of home fries on the side. 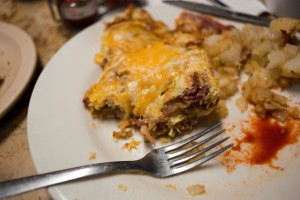 The Greek Deluxe was much better. The fresh, garlicky sharpness of the cool tzatziki sauce over the hot omelette was a great way to start the day. The next time I order an omelette here, I’m gong to ask them to make it with one fewer eggs or to give me only a small portion of the home fries, because the portion was so huge that I felt the need to hibernate afterward.

I had enjoyed that Greek deluxe omelette so much that on another visit I tried another Greek item – the gyro sandwich with garlic feta fries. This was the only meal over three visits that didn’t hit the mark. The sandwich was made with hot grilled pita and still had that excellent tzatziki sauce, but the portion of meat was unexpectedly small, and the chunks of cheese on the feta fries were so big that any given bite had a flavor of cheese or of fries, but not both. The meat portion was probably a fluke, because everything else here errs on the side of abundance, but I prefer the standard fries.

I returned for lunch a few days later with a friend and sat out on the patio, where some regulars were chatting with George as he went about his work. The feeling here is of a local hangout for a mostly older crowd, some of whom probably have been coming here since they and the building had a lot less wear and tear.

Our server recommended the Big Texas Burger to my companion. When I learned that the chili is made in-house, I decided that something that featured it was an absolute necessity. A rather un-Mexican lunch burrito beckoned – filled with chicken, mushrooms, onion, and cheese, topped with the aforementioned chili, and served with French fries.

The chili itself was a bit of a disappointment, a very mild stew of ground beef and beans with no heat to it. But as a sauce over the burrito it was fine. I wouldn’t order a whole bowl of the chili by itself, but it was fine in context. The menu actually hadn’t mentioned the fries, and once again the portion was over the top. They were hot and crisp so I ate them, but felt a bit like a python who ate a whole javelina afterwards.

The Texas burger consists of a burger patty topped with pastrami, fried onions, and cheese. I don’t think of Texas as a major center for pastrami, and I have searched in vain for the reason for the name. Andrew F. Smith’s book “Hamburger: A Global History” is silent on the subject.

The popularity of the item is no mystery. The peppery pastrami adds texture and flavor to an American favorite. The Cozy Café version is good. I prefer the slight smoky flavor of a charbroiled burger, but it was a tasty lunch nevertheless.

The Cozy Café is an unpretentious place, an institution of character that has its own devoted following. The food is not breaking culinary ground, but it’s not trying to – it is true to an old fashioned American ideal of a full meal at a modest price in friendly, homey surroundings. 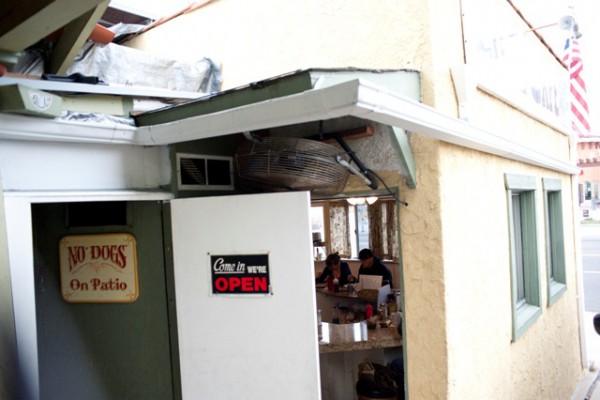