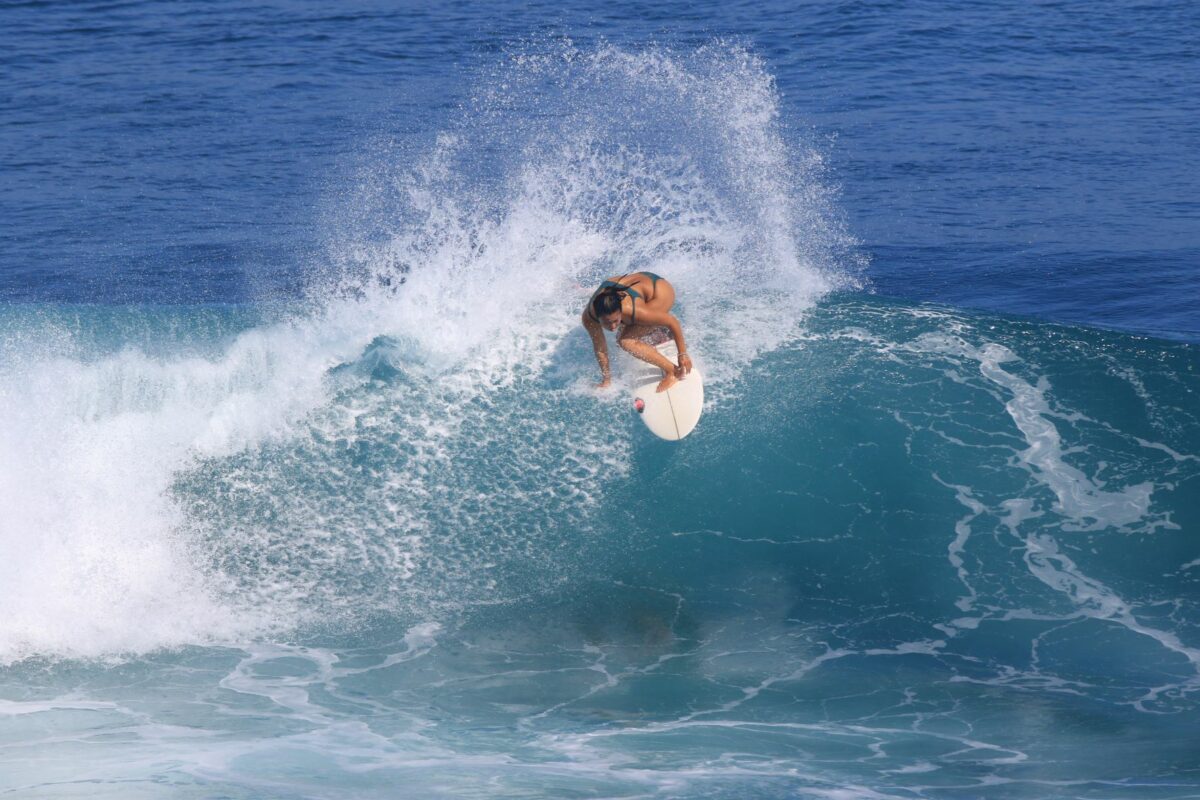 Hermosa Beach surfer Sara Kohrogi aspires to emulate her grandfather, a Japan Baseball Hall of Famer, in opening up Japanese surfing to the world

Sara Kohrogi was surfing Chukai Beach Park, on Hawaii’s North Shore in January 2020, when Kelly Slater paddled past her.

“Hey Kelly. You don’t know me. But I heard you have scoliosis. So do I,” she shouted.

“He looked taken aback. I doubt anyone had ever said that to him. I wouldn’t have either. But it was too much of a coincidence. The week before, my mother, Susan, read he had scoliosis, and told me if I met him to ask him to be my coach.”

“We chatted in the water for about an hour, between catching waves,” she said.

Kohrogi is a short, power surfer, known for charging big waves, and for big-spray, backside snaps. Two months earlier, in November 2019, the then 24-year-old Hermosa Beach native had won the Nippon Surfing Association (NSA) Championships. The title earned her a place on the Japanese National Surf Team. She was on the North Shore to train for the Japanese Olympic team tryouts, scheduled for November 2020. (Because of the pandemic, the 2020 Summer Olympics in Tokyo were rescheduled to summer 2021.)

“I told him I felt blessed to have had the opportunity to talk to him, and I needed to paddle in. He said, ‘I’ll paddle in with you.’”

“My dad was freaking out, wondering why Kelly Slater was talking to me. All the photographers at Pipeline had turned their cameras on us,” Kohrogi said. Chukai is the beach break next to Pipeline. 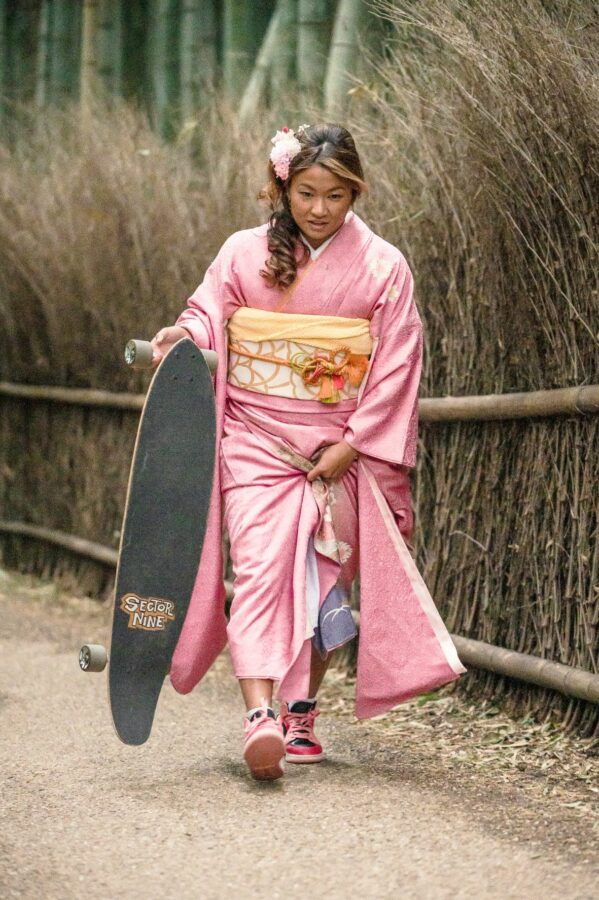 Sara Kohrogi skateboarding in a kimono in the ancient city of Kyoto during the filming of Chasing of the Disney+ series “Chasing Waves.” Photo by Julio Koshiishi/Disney+

The 11-time world champion told Kohrogi, and her father, Acey, that he was making an ABC Television show called “The Ultimate Surfer,” and asked if she would like to be in it.

“He told me a website to go to to submit an application,” she said.

“The next day, I was on the beach watching the sunset when someone called out, ‘Hey Sara.’ It was Kelly. He asked if I’d submitted my application. I said no. He told me to do it.”

She did, and a day later a producer called, and a month later, after auditioning, she was offered a part in the show.

That May, she sprained her knee and lost the part. She moved back to her parent’s home in Hermosa Beach to hopefully rehab her knee in time for the Japanese Olympic tryouts.

Kohrogi’s  parents were born in Japan. As a result she has dual Japanese/American citizenship.

To stay in condition while out of the water, she worked with trainer Jennifer Paolucci, at Chess Fitness in El Segundo. To heal her knee without resorting to surgery, she worked with soft tissue specialist Ramyn Savar.

Kohrogi was diagnosed with scoliosis (curvature of the spine) when she was in eighth grade at Hermosa Valley School. Until then, she had played on the Junior LPGA tour, and starred on Hermosa Beach Youth Basketball, and Little League teams. She had hoped to  play golf and basketball at Mira Costa, win a golf scholarship to college, and then play on the Ladies Professional Golf Association tour.

Her doctors told her to quit sports because one-sided, repetitive motion would further damage her spine. The right handed  Little League pitcher hit buckets of balls every week at The Lakes driving range. To protect her spine, her doctors proposed implanting two steel rods on either side of her spine. When she refused the surgery, knowing it would prevent her from ever playing sports, her doctors suggested swimming because swimming doesn’t favor one side of the body. She found swimming boring. Her father, who grew up surfing in Hawaii, suggested surfing, as he had many times before her diagnosis. Surfing hadn’t appealed to her. But this time, absent an alternative, she took her father’s advice. Her father, a proponent of alternative medicines, also sent her to Savar to strengthen her back.

Kohrogi describes herself, half jokingly, as OCD (obsessive compulsive disorder). With just two months before the start of her freshman year at Mira Costa, she was determined to make the surf team. The surfing powerhouse had won three consecutive South Bay Scholastic Surf League titles. Over the next four years she helped Mira Costa extend that streak to seven years. She won the National Scholastic Surfing Association Shortboard championships in her junior year, and finished third in her senior year. 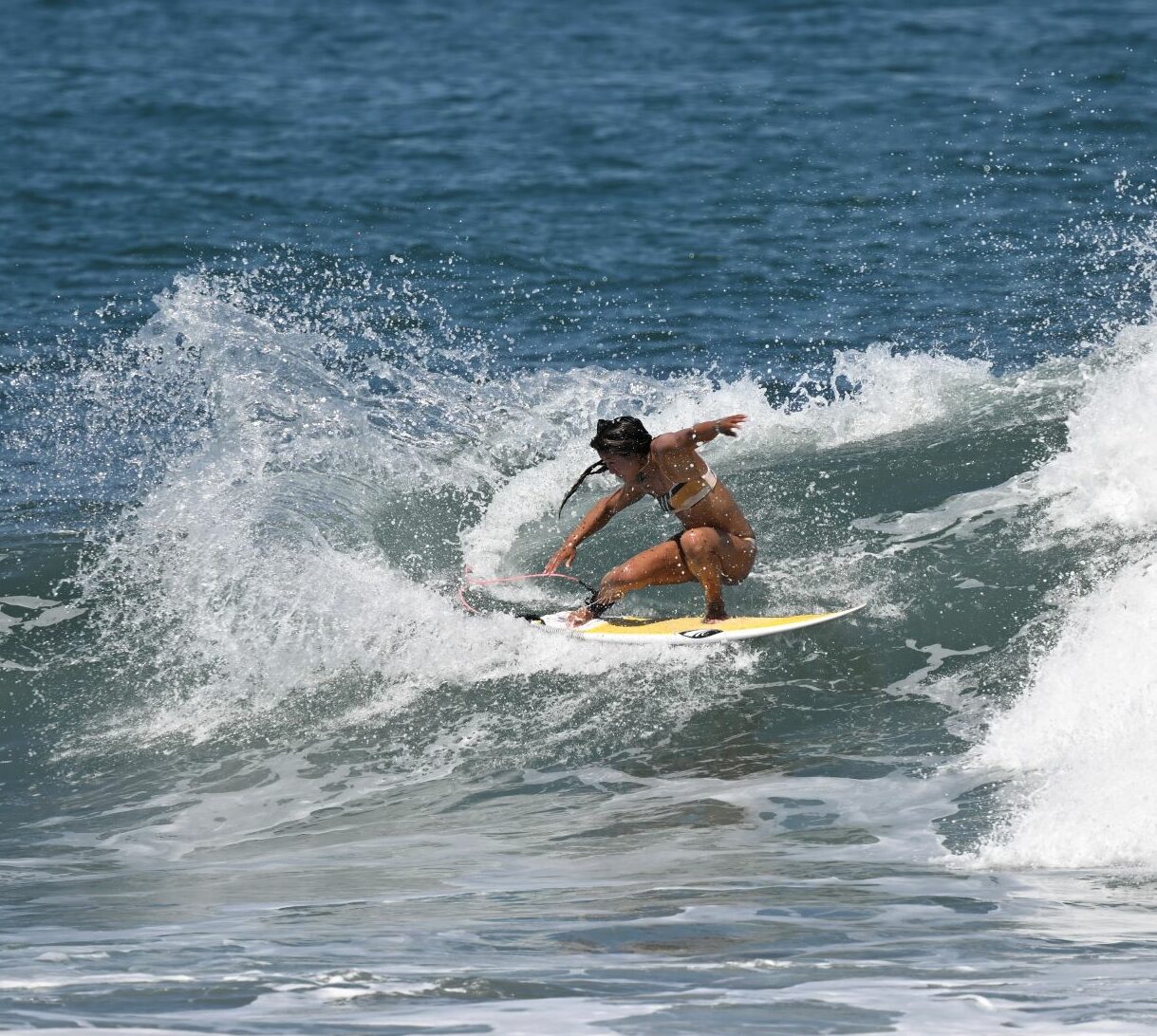 But Kohrogi also liked school. In third grade, she decided she would always get straight A’s. At Mira Costa, her favorite course was honors physics.

“I’ve learned so many things in physics that are really useful in life,” she said in a 2015 Easy Reader story, headlined “The surfing valedictorian.” She was the surf team’s first valedictorian.

But having surfed only four years, she did not have strong relationships on the byzantine contest circuit. Her only sponsors were Becker Surf, a bikini company, and a sunglass company.

“I wasn’t super confident about my surfing. I wanted a degree in my back pocket,” she told WSL (World Surfing League) podcaster and former pro surfer Dave Prodan during an interview last week.

“Also, I was afraid I might find life outside the school system too liberating, that I might not want to go back to school,” she admitted to Prodan.

Instead of pursuing a professional surfing career, she enrolled at the University of California, Berkeley, Haas School of Business, and joined a sorority. But she didn’t quit surfing. Instead, she founded the Berkeley surf team and made the two hour drive to Santa Cruz to surf at least once a week.

As graduation approached, she formulated a plan to move to Japan.

“I thought of it as getting a masters in Japanese language and culture, while surfing a lot,” she told Prodan.

Her sorority friends and their parents didn’t approve. 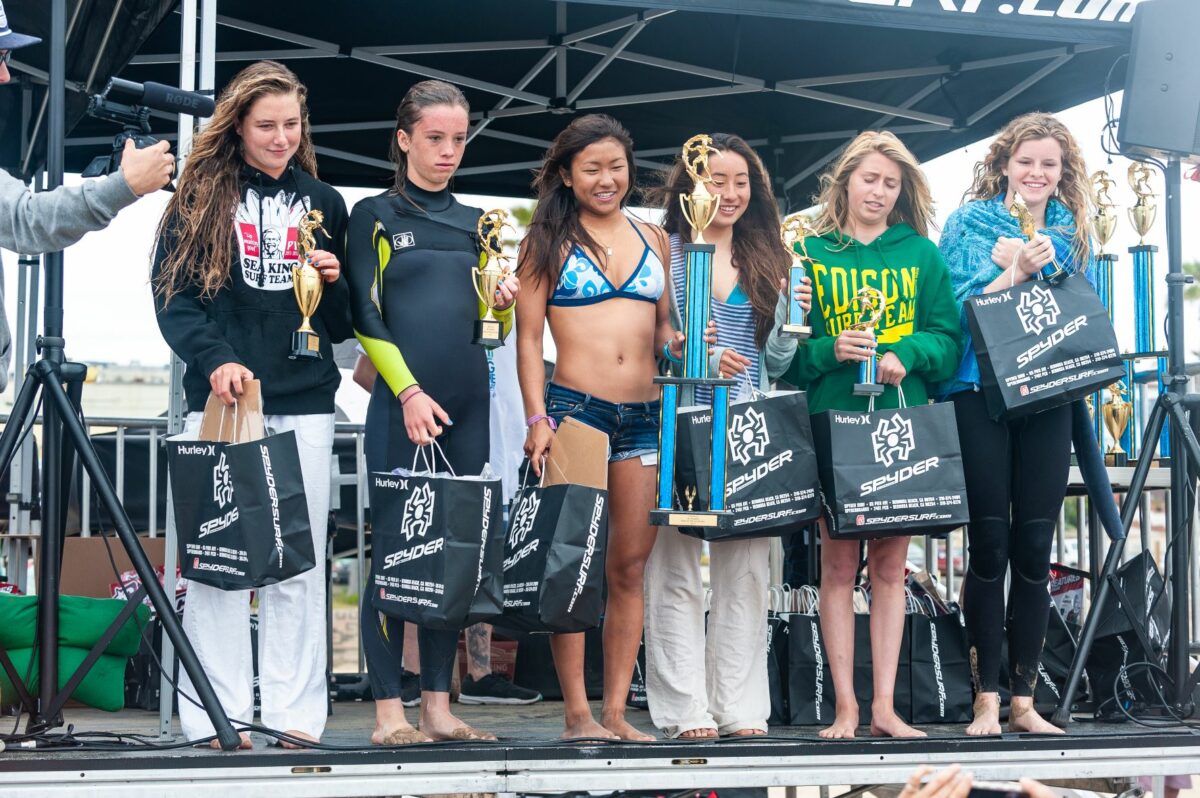 “Their jaws would drop when I told them my plan. They thought I was wasting my education. They already had jobs lined up with Goldman Sachs,” she told Prodan.

Fortunately, her parents were supportive. They had taken her to live in Japan when she was three. She returned to Hermosa Beach speaking Japanese as her first language. But despite weekly classes in Japanese until she was eight, her fluency faded.

“I was embarrassed to speak it. As a kid you want to fit in,” she explained.

The day after graduating from Berkeley, Kohrogi flew to Miyazaki, Japan, where her parents’ families lived. The medium-sized city is famous for its beaches.

A few months later, in time for the typhoon season, she moved to the small island city of Kochi.

Asahi Food, one of Japan’s three largest food distributors, offered her a position working with its American customers, and sponsored her surfing. When she won the NSA National Championships, and was placed on the national team Asahi underwrote her winter training on Hawaii’s North Shore.

When COVID was declared a pandemic in March 2020, she returned from Hawaii to Japan. Then she quit her job and booked a flight back to Los Angeles.

“I wanted to be with my family during the lockdown, and thought I could train in Huntington, where the beaches were still open.”

While waiting to board the LAX flight home, she received a call from a producer at Disney+. Surf film director Jason Baffa was shooting a documentary called “Chasing Waves,” about Japanese surfers training to qualify for the upcoming Olympics. Baffa’s previous documentaries included “Single Fin: Yellow,” about a yellow longboard shaped by El Segundo board builder Tyler Hatzikian. The board travels to surf spots around the world, where it is surfed by local pros. Baffa invited Kohrogi to be one of the six Olympic contenders he would film leading up to the Japanese Olympic trials.

“I had let go of my job and sponsorship,” she told Prodan during their podcast. “And no joke, I was in the airport when I got the call from the Disney+ producers. They asked, ‘Are you ready to start shooting?’ I thought, ‘Oh no, I can’t.’ I told them I was boarding a plane for home.”

She envisioned a repeat of her “Ultimate Surfer” disappointment.

“They said, ‘Perfect. We can’t shoot in Japan because of COVID. We’ll shoot you in Hermosa.’”

Over the next several months Baffa’s camera crew shot B-roll of Kohrogi surfing and skating, and talking with her parents and friends.

In September 2021, after her knee had healed, Kohrogi returned to Japan to prepare for the Olympic trials.

A Japanese camera crew followed Kohrogi, and the documentary’s five other Olympic hopefuls for the next three  months, in and out of the water. American film crews still could not get visas because of the ongoing pandemic.

The cameras follow Kohrogi on a visit to the Japanese Baseball Hall of Fame in Tokyo. Her maternal grandfather, Akihiro “Ike” Ikuhara is the subject of a permanent exhibit in the museum.

The plaque beneath a bronze likeness of her grandfather notes, “The manager of Asia University went to Los Angeles to study baseball in 1965, and became the special assistant to Dodgers President Peter O’Malley. He was second to none in promoting the U.S. and Japan baseball interchange.” 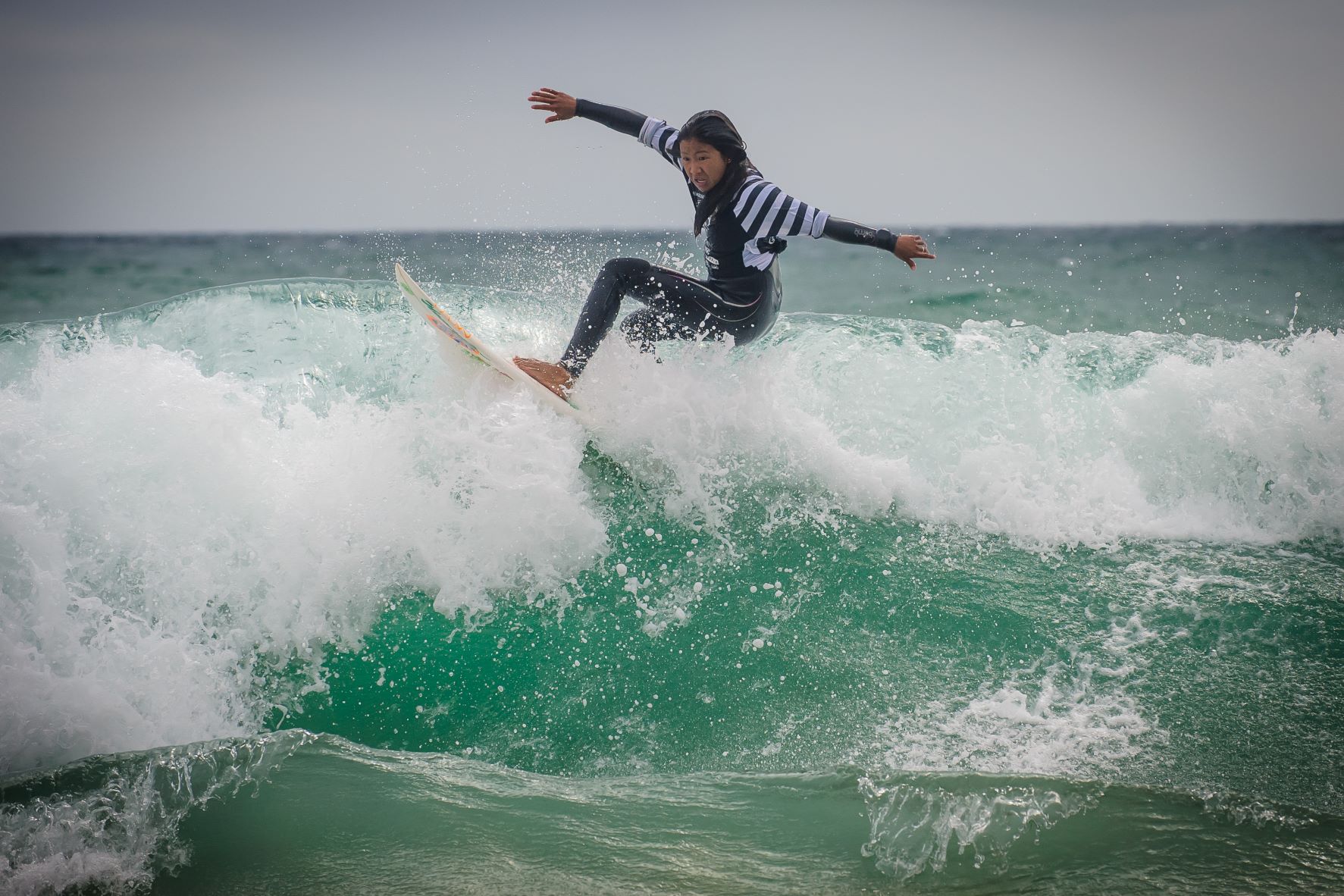 Sara Kohrogi sets up a floater at the Manhattan Beach pier during the Spyder Surf South Bay Boardriders Club in December 2012. Photo by Steve Gaffney (SteveGaffney.com)

“Is that really his? I’ve never seen it before,” Kohrogi says. Her grandfather died before she was born. Earlier in the documentary her mother tells her daughter the two would have had a lot to talk about.

“Would you like to try it on? I think your grandfather would be pleased,” the curator says.

The curator puts on sanitary gloves to remove the ring from its display case, and hands it to the granddaughter. She reads her grandfather’s name engraved on the ring. The ring fits loosely on her fingers.

“I hope I can honor his memory,” she says.

On a beach in Kochi, she verbally jousts with a young, surfing monk. 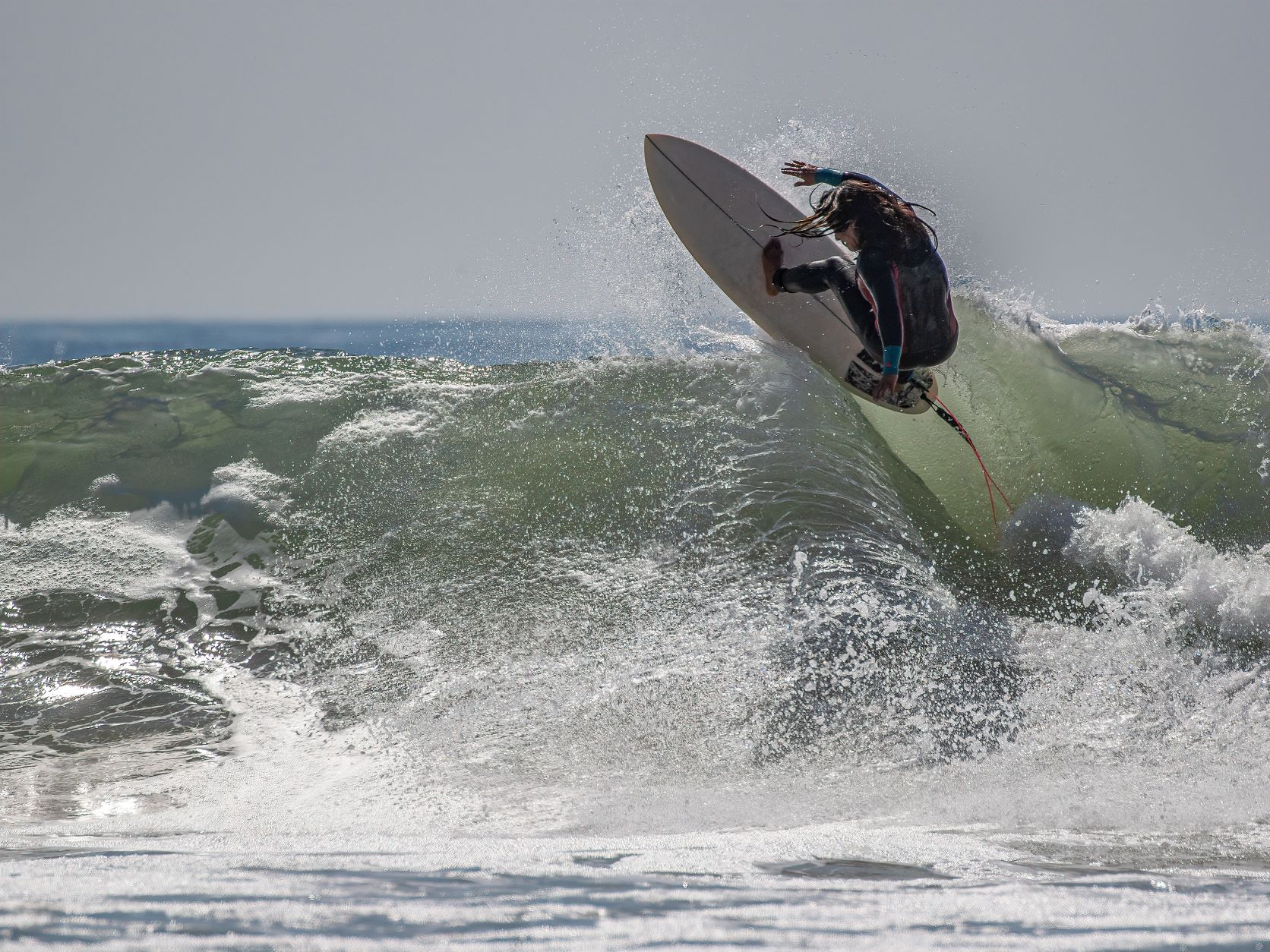 She suggests that surfing and Buddhism are similar. He says no, he thinks of the two as being on separate tracks. She persists, pointing out that both are meditative. He acknowledges their similarity in how both encourage people to become better, and more self confident.

“The desire to become better is something my Buddhism  embraces. Desire is not a bad thing,” he says.

In the Japanese Olympic qualifier, in Kochi, by her own admission, she surfed badly. The small, groveling surf was ill-suited for her power surfing. She did not qualify for the team.

Kohrogi is now living in Hermosa, at least temporarily. She said this week, she hopes to represent Japan in the 2024 Olympics. She also wants to become Japan’s first female freestyle surfer. Surfing in Japan is contest-focused, and more regimented than in the U.S. Contest surfers must pass five tests, demonstrating they can paddle, duckdive, and get to their feet, she pointed out..

She is also forming a company with childhood friend Sunny Villapando, a former Mira Costa and Stanford volleyball player, with a degree in engineering. The company will have a beach culture focus and incorporate business and philanthropy.

In the coming months, she said, she plans to work with the South Bay Boardriders Club to encourage more girls, and women to enter the club’s monthly contests.

Last Saturday Kohrogi hosted a party at the MNML golf facility in Redondo Beach to celebrate the streaming of “Chasing Waves,” after its nearly two years of production. The evening incorporated a fundraiser for the Jimmy Miller Foundation, which offers ocean therapy for military veterans and underprivileged kids. ER