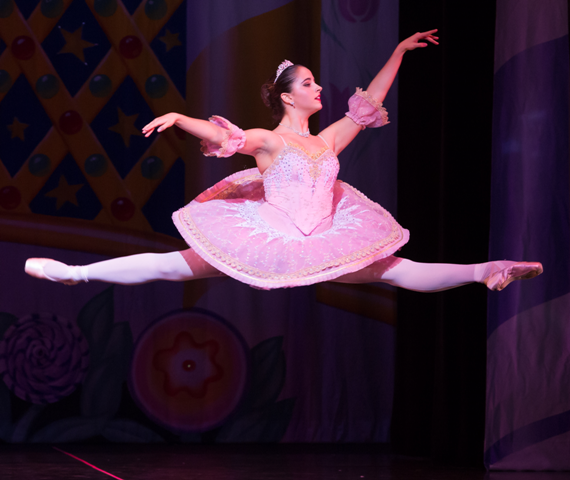 Daisy Jacobson as Clara in "The Nutcracker." Photo courtesy of South Bay Ballet 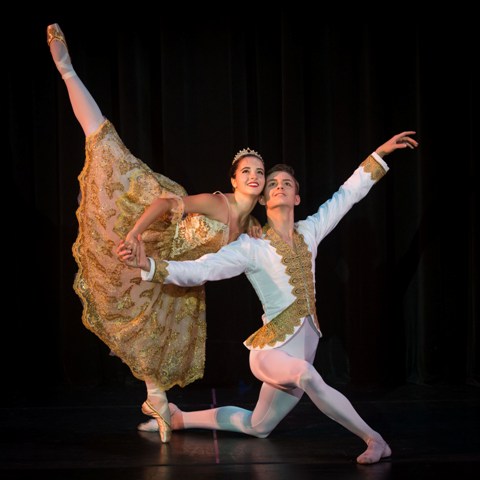 Some of us know at an early age, and some of us never have a clue.

“In the first grade,” says Daisy Jacobson, “we had to draw a picture of what we wanted to be when we grew up, and I remember drawing a stage with red curtains, and then a ballerina in the middle.”

Ten or twelve years later, that ballerina now dancing to applause is Daisy Jacobson herself. 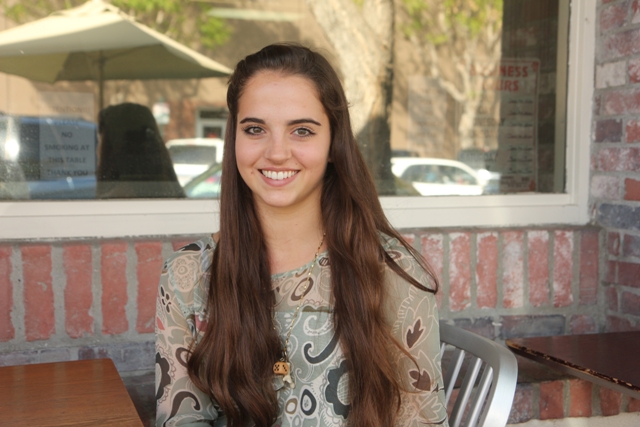 Daisy Jacobson kicking back at the Torrance Bakery in Old Downtown Torrance. Photo by Bondy Wyszpolski

Finding a job and choosing a career can resemble a roller coaster ride for many people but for Jacobson it’s sort of like she stepped into an elevator and pushed the button for the highest floor. She’s just 18, but right about now she’s in Washington, D.C., for the Presidential Scholars National Recognition Weekend, attending the Medallion Ceremony (with President Obama on hand), performing at the Kennedy Center, and meeting with her representatives in Congress , Henry Waxman – well, our representatives too since Jacobson lives locally, in Manhattan Beach. She’s lived there her entire life.

That’s the impressive culmination of a career that’s essentially not even started. Jacobson enters Julliard later this summer, where she’ll hone her skills in both modern dance and classical ballet, before seeking a position with one of this country’s prestigious dance companies.

Daisy Jacobson as Clara in “The Nutcracker.” Photo courtesy of South Bay Ballet

But in this flurry of excitement we’re getting ahead of ourselves.

“I just remember always dancing,” Jacobson says. At three or four years of age her parents enrolled her in a pre-ballet class, “and I came to South Bay Ballet when I was seven. That’s when I had my first ballet class, and it was with Diane Lauridsen.”

Jacobson attended Rolling Hills Country Day School and then Chadwick, also in Rolling Hills. Her twin sister, Camille, was also dancing at an accomplished level until about a year ago. Does Camille plan to pursue a career in dancing as well? No, she wants to be a writer and will soon pack her bags for Harvard.

Daisy Jacobson as Clara in “The Nutcracker.” Photo courtesy of South Bay Ballet

How did Daisy Jacobson end up as a Presidential Scholar in the Arts?

A couple of years ago she entered a local arts competition called the Spotlight Awards and became a semi-finalist. Impressed by her abilities, the folks at Spotlight suggested she apply to YoungArts. She sent them a video and a month later they informed her that she was one of 152 artists (in genres ranging from theater to film) chosen to compete during YoungArts Week.

“I met so many amazing artists and became close with all of the dancers,” she says. A few weeks later Jacobson became a YoungArts winner and was awarded the Level 1 scholarship prize in dance. Later she was notified that she’d been one of 60 artists from YoungArts nominated to apply for the honor of Presidential Scholar.

“I completed a long application of essays and forms during one of the most crucial times of my high school career,” she says. “It was stressful. I’m lucky I’m good at time management.”

Years passed, decades passed – or so it may have seemed. Then came the announcement that Jacobson was a semi-finalist. Three more weeks went by and then – on her 18th birthday, Daisy Jacobson learned that she was one of those rarities among rarity, a Presidential Scholar in the Arts.

More applause for the girl on stage with red curtains.

Waltzing into the future

Daisy Jacobson may have butterflies in her stomach, but what aspiring artist doesn’t? “I never doubted that I wanted to do it,” she says of her dancing; “I doubted if I could do it.” But then, that’s why we practice, and practice, and rehearse.

One might think that Jacobson looks forward to dance competitions since she excels in them, but in general that’s not the case.

“I think that the spirit of the art form gets lost, because it becomes more (like) gymnastics. It becomes more about how high you can jump… It’s all about the tricks. Besides,” she adds, “you can work on a variation or a solo your whole life and make it perfect, but then if you get new choreography that’s actually what matters. Because when you dance you’re not practicing the same routine over and over again for three months before you put it on stage. You have to have all the skills necessary to do everything, and versatility is really, really important.”

This is one reason she’s excited to be attending Julliard, right there at Lincoln Center in New York City. It’s a four-year program with a curriculum that will immerse Jacobson both in ballet and modern dance. “It’s kind of a shift from what I’m doing now,” she says, “which is mostly ballet. But I like both equally, so I think it’s the perfect place.”

When she finishes her schooling she’ll be even more graceful than she is now. At that point she’ll be recruited by a professional dance company or else she’ll audition for one.

“That’s definitely what I want to do,” Daisy Jacobson says. “That’s the next step after Julliard.”