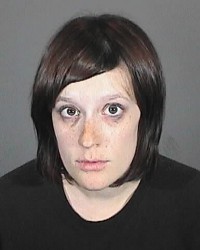 Jessie Canfield, 24, gave birth to a baby at a party on Irena Ave. that was found in a trash can outside the residence the following day.

Trash collectors made a grisly discovery last week when a deceased newborn infant was found inside a trash can on the 700 block of Irena Avenue.

A subsequent police investigation led to the arrest of a 24-year-old former Redondo Beach resident, Jessie Canfield, who was arrested under suspicion of murder. The Los Angeles District Attorney’s office has thus far not pressed charges, pending a report from the Coroner’s Office that could up to two weeks.

The baby was found at about 9 a.m. on March 3 when a trash collector began emptying a 64-gallon can that was too heavy to lift. A Redondo Beach Police Department Crime Scene Investigation unit developed information by canvassing the neighborhood that led to Canfield’s arrest the next day at her current residence in Santa Barbara.

According to police, she had attended a party at a residence on Irena Ave. on the night of March 2. Evidence found at the residence – particularly, large amounts of blood – indicates she gave birth to the baby in a bedroom at the party. Canfield later told police that she was unaware she was pregnant.

“I guess that is possible,” said RBPD Lt. Joe Hoffman. “However, it’s very difficult to believe. We are talking about a full term baby here.”

Investigators estimated that the baby, a girl, weighed between six and seven pounds.

An attorney representing Canfield reiterated that her client was unaware of her pregnancy. Nina Marino, a lawyer with the Beverly Hills firm Kaplan and Marino, suggested that the Coroner’s report would clear Canfield of any murder charges.

“We expect the Coroner’s report to indicate that the child was stillborn,” Marino said. “My client is traumatized.”

Canfield, a 2004 graduate of Redondo Union High School, was released from police custody on March 5.

“Physically, she is fine,” Marino said. “She is taking antibiotics, and she’s recovering. You know, I think we can all sympathize with the trauma she has undergone.”

RBPD Sgt. Phil Keenan said that one message that police are trying to convey is that the Safe Surrender program is available to protect babies from being hurt or killed in cases of potential abandonment.

Hoffman said that what the Coroner determines regarding the condition of the baby will likely be the deciding factor on whether charges are filed against Canfield. Even if the baby was stillborn, Hoffman said, disposing of the child in the trash was the wrong choice.

“There are programs in place,” Hoffman said. “In any event, this is just not the way to handle it.”

“It’s incredibly bizarre and very unfortunate,” Hoffman added. “It’s a tragic situation, not matter where it happens. But especially, in Redondo Beach, we are not used to dealing with major, high profile incidents like this, and so it really shocks the community when this happens.” ER