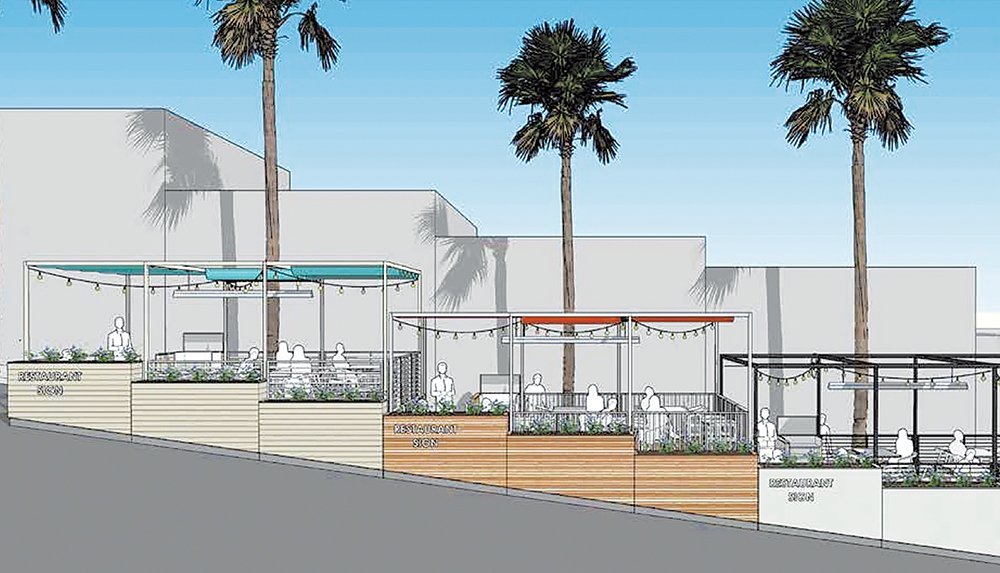 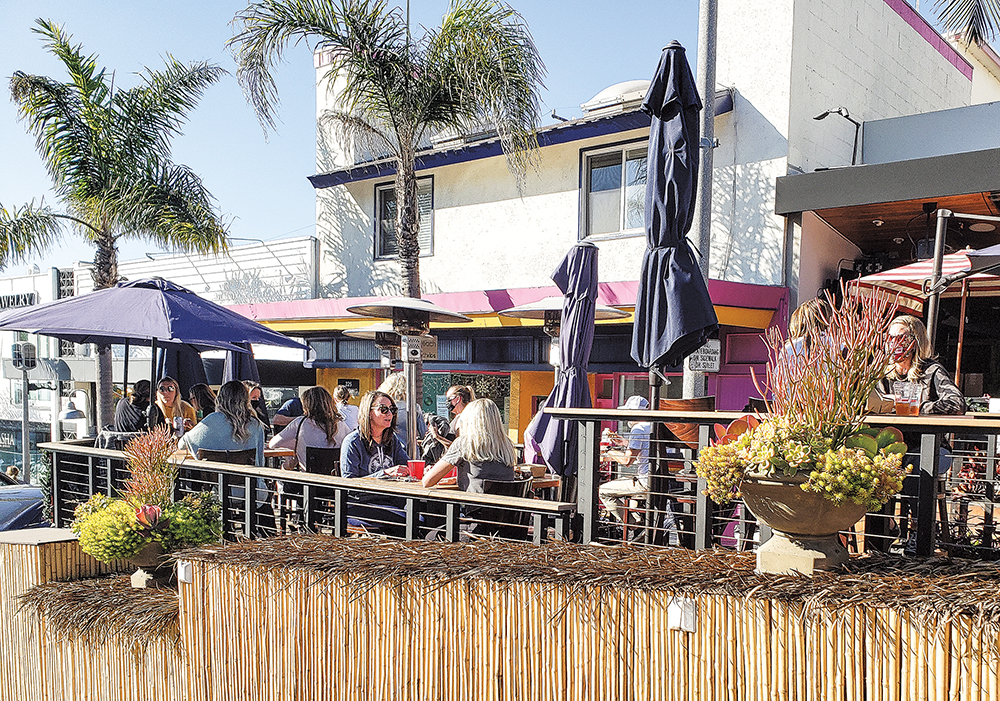 The outdoor dining decks constructed by restaurants as an emergency measure during the pandemic will be in Manhattan Beach four months longer due to the recent surge in COVID-19 cases, and possibly much longer. The City Council on Tuesday night unanimously agreed to keep the decks until January 3 and will consider allowing more permanent decks even after the pandemic.

The dining decks were first allowed in June of last year to help restaurants survive during the pandemic. Originally, it was believed the decks would only be up for a matter of months, until the scope of the pandemic revealed itself. Then, when COVID-19 cases steeply declined in June, it looked like the decks would come down after July 4. But as cases began to go back up, the council extended the decks until September 7. Then, as the state and the nation experiences another genuine surge, the Council agreed to another extension.

Councilperson Steve Napolitano emphasized that some of the decks may need to come down for a few days for city events, such as the holiday fireworks, and that depending on the state of the pandemic another extension could be considered later.

“Public safety takes precedence over everything else,” Napolitano said. “So if we have events, and our police and fire chiefs and Public Works folks say the decks should be removed for the public safety, that’s just the way that it is. Businesses who argue about it, frankly, they don’t deserve decks out there anymore. We’re looking for cooperation…And again, we’re going to have a hard stop on January 3, but so far we know that all our hard stops have not been hard. And so if we want to reassess in late November, early December, then I’m willing to do that.”

Mayor pro tem Hildy Stern said the January timeline is in keeping with what most surrounding cities are doing.

“We’re still in COVID,” Stern said. “These restaurants are still impacted, and our neighbors are largely extending —  they’ve already agreed to beyond the January 1 date. To keep our city and our business community competitive, we should be looking at what our neighbors are doing as well.”

The council came to an easy consensus on the January 3 extension, although Mayor Suzanne Hadley argued for March 1. Less consensus existed around charging restaurants for use of public space and a proposal submitted by the Downtown Business and Professionals Association that included renderings of permanent decks.

The latter issue, which council broached only insofar as to direct staff to organize a work plan for further public discussion, appears likely to become a battleground within the community. Public comment Tuesday night centered on the proposal, which would pare down existing deck space and require more architecturally coherent deck structures.

Jim Burton, a downtown resident and business owner, said he saw both sides of the issue but that the impact overall was devastatingly negative.

“I’ve certainly seen more people in our downtown, on the dining decks, than I’ve ever seen, and it’s great,” Burton said. “As a business owner, I’m thrilled for our restaurants. As a resident, it puts us in an awkward position, because this is destroying the quality of life for us when I wake up in the morning and there’s trash everywhere, or you try to go to a restaurant and can’t walk down the sidewalk.”

“I don’t have a problem with the consideration of extending [outdoor dining] for short periods of time while we’re still going through this crisis,” said resident Kathleen Smith. “But I am really offended by the concept that we’re going to spend our public money to consider extending this into the future, without regard for the residents of a downtown and the other businesses of the downtown. And to go ahead and act as if this is the impetus for what a lot of people have wanted for years, which is to totally upset our way of life and totally change the values of our property to enhance the values of businesses downtown — it’s not right.”

Restaurant owner Mike Zislis said keeping the decks would simply recognize that coping with COVID will be a fact of life for years to come.

Realtor John Altamura said the decks are good for all kinds of businesses as well as property values.

“I cannot emphasize how busy downtown is…It’s no coincidence that, yes, the patios are a big part of that, and many businesses are benefiting from the restaurants,” Altamura said. “The residents and the non-residents who come into town, they eat at the restaurants, stroll around town, go down to the pier and then they also shop. It’s a big deal. Regarding the value of the properties that are close to downtown, as a Realtor, I can tell you that the property values have gone up tremendously. The fact that downtown is so busy is an incentive for many buyers to want to live close to downtown. People who have come from urban centers — Chicago, New York City, Florida, Miami — they love being able to walk to town.”

“I hear about outdoor dining and the damage that it’s going to do, yet when people go to Europe, one of the things they love best about it is being able to eat along the sidewalks and watch people go by and shop,” Newman said. “They want to eat outside because it’s healthier, it’s fresher. It’s not the old way of life. This is a new way of life.”

Resident Michael Monaghan said allowing dining decks was the single best decision the Council made during the pandemic.

“There’s this discussion about are there winners and losers among the restaurants. The reality is the winners are all of the residents of Manhattan Beach,” Monaghan said. “If you look at the people using the decks and how full they are, that shows the absolute overwhelming support from the residents of the city.”

The DBPA commissioned the architectural firm Gensler to do renderings of what permanent outdoor decks would look like. As part of its proposal, DBPA also intends to reduce its outdoor dining footprint from 74 to 34 parking spaces downtown by November in order to help create more parking during the holiday season.

Mike Simms, a restaurant owner and president of DBPA, stressed that the proposal is just a starting point. But he said a consensus has emerged among downtown businesses generally that permanent dining decks would be a good thing.

“While there is a difference of opinion about what a final outdoor program looks like, there’s still a general consensus that it should remain in perpetuity,” Simms said. “What the final product looks like, that’s up to this process. It doesn’t end here. It starts here.”

Council will consider the DBPA plan in the next month or so, and did not commit either to the reduction of the dining deck footprint in November or permanent decks beyond January. Nor did council members agree on how much businesses should be charged, if anything, for using public right of way. City Attorney Quinn Burrow said that given current circumstances, free use of the public space still does not constitute an illegal gift of public funds. The loss of revenue due to the parking spaces at present amounts to $72,950 per month. Restaurants have paid $80,000 in permitting fees for the decks and another $21,000 in encroachment fees, but those were one time costs. The use of public space has otherwise been free.

Councilperson Richard Mongomery noted that the city lost more than $8 million in revenue last year, and even though American Recovery Plan Act funds have begun to help replace some of that revenue, the city budget is still not whole.

“We are being reminded that we are still in COVID,” Montgomery said. “Well, we are too, as a city….Something needs to be offered up.”

Napolitano said that forgoing that revenue takes away from services the city can provide downtown.

“I understand it’s not a gift of public funds at this point,” he said. “But if an emergency is 18 months long, is it still an emergency?”

Mayor Suzanne Hadley was taken aback by her colleague’s arguments.

“You guys are crazy,” she said. “In a state of emergency…”

“You are overusing that term,” Napolitano said, cutting her off.

“I just don’t agree with changing the rules of the game,” she continued.

“Everything we do changes,” he interjected.

“Steve, no one is charging for the public right of way,” Hadley said. “Beverly Hills, El Segundo, Redondo, Torrance. Most of them didn’t charge the encroachment and the permit fees, and we did. I think it’s premature…I just don’t understand why we would nickel and dime and be the first among equals to break ranks and punish our restaurants and by definition, punish our retailers who support outdoor dining.”

Hadley’s motion to continue to offer free use of public space failed, two votes to three, with Councilperson Joe Franklin voting with her. The council briefly considered a $1 per square foot fee, then a $100 flat fee, but ultimately decided to table the matter for further study. ER