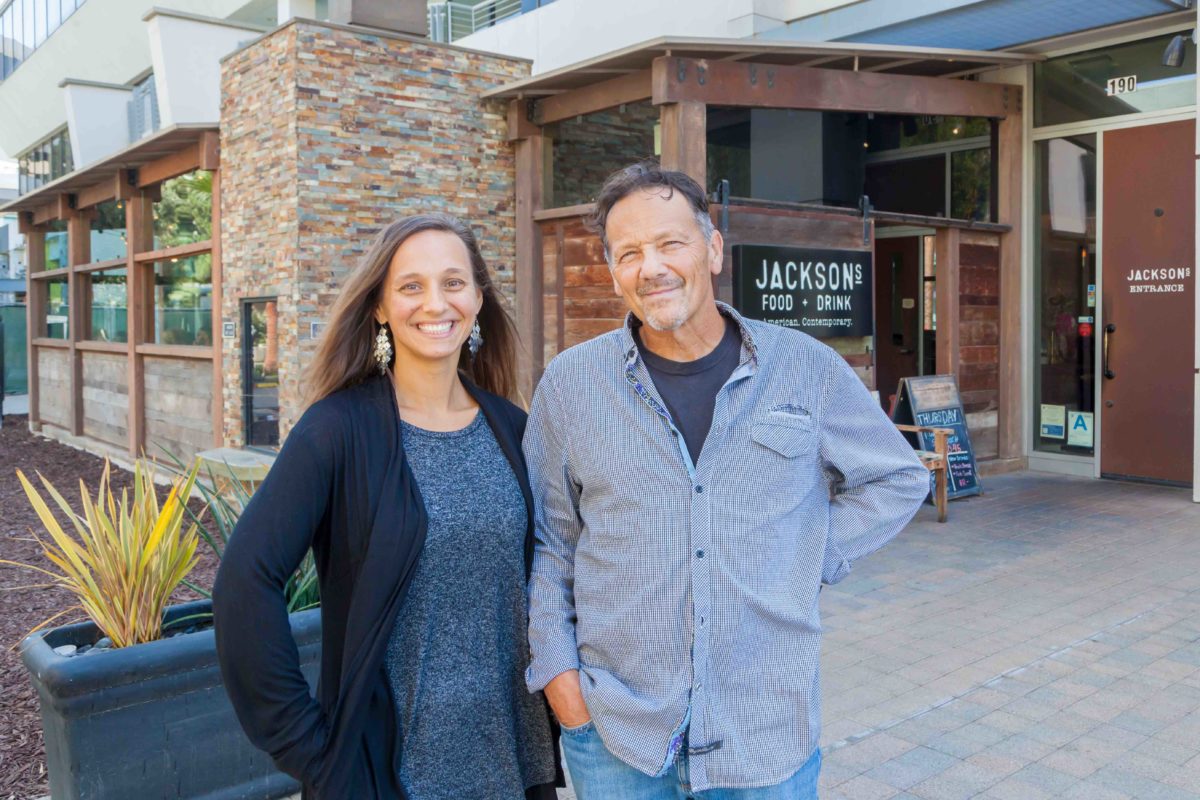 In the 1950s, “dinner and a movie” was a first date cliché, a way to go out and not do anything overtly romantic like dancing, which might risk the couple actually touching one anotherr. Restaurants near movie theaters benefited from the traffic, and servers might get larger tips if they perfected the art of offering to refill waters during awkward silences. If that dinner and date went well a relationship might blossom, and even if it didn’t both parties had a decent meal and a cinematic experience by the end of the evening.

Locating near a movie theater might seem like a shakier proposition in our modern world of streaming and cable, but some places that have done so are doing just fine. Jackson’s Food and Drink, which is next to the ArcLight on Rosecrans, is ticking along despite construction that has made the whole building appear closed. Then again, they can count on more than just location, because they have a clientele that has supported them for two decades despite a move a few years ago that caused an extended closure.

Jackson’s nicely combines distressed wood with modern architecture, creating a look that is modern but comfortable. That nicely fits chef-owner Scott Cooper’s culinary style.  He favors updated comfort food that includes both Americana and global influences. There’s nothing wild and wacky here, but just about everybody will find something to eat on the wide-ranging menu.

I recently went there with eight members of my family, including a vegetarian and two very picky eaters. It was helpful that the menu was more informative than some others  around town, listing most ingredients in each item. There’s even one selection, a spicy Thai shrimp salad, that has the words “Please read ingredients carefully” below it, and I’m sure there’s a story behind that. Nobody at our table ordered it, but it sounded delicious.

The starters we sampled were hummus, sweet corn esquites, Caesar salad, and butternut squash soup. That soup was the kind of comfort food that warms you from the inside, pureed squash with tart apples and a bit of sharp cheddar. It showed that chef Cooper knows restraint can be a virtue when dealing with the classics. The Caesar salad was another old standby very well executed, with enough garlic and anchovy sharpness in the dressing to satisfy anybody who likes it on the robust side.

In case you were wondering about the esquites, it’s Mexican street corn with lime, chile, and cilantro served off the cob. (Don’t feel bad about not knowing that, I didn’t either.) This was a bit milder than expected, with a little jalapeno bite and a scant dusting of lime-chile powder, but if you like yours hotter they can jazz it up. The hummus went a bit in the other direction. The pureed garbanzo and oil mix had a hefty dose of garlic and generous amounts of red and green chili paste along with za’atar, the fragrant herb mix from the Levant. There was also some yogurt sauce that cooled things down a bit and added a dash of gentle, rich sourness. It was an outstanding dish with a lot of flavors going on, but it was a bit too spicy for some at the table. You might ask for the chili sauces on the side if you’re timid, but I would order it again just as it was.

For mains we had ordered a lamb sausage pizza, garlic lovers’ pasta, grilled Atlantic salmon, mac and cheese, and honey-chile Jidori chicken. The chicken was served with smoky Cuban black beans and grilled plantains that added a Caribbean contrast to the sweet and spicy flavors, and it was a very harmonious combination. So was the salmon, which is offered with two choices of accompaniments — Mediterranean with pomegranate glaze, asparagus, and Israeli couscous or French style with lemon-caper beurre blanc, garlic spinach, and almond rice. The person who ordered it selected the European-accented version, and it was something any French restaurant would be proud to claim as their own. 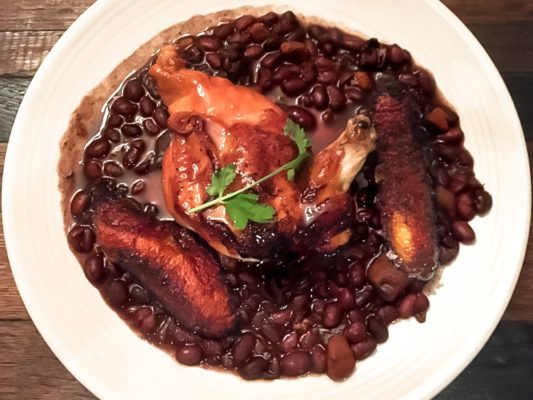 The Jidori chicken over black beans with plantains has a Caribbean flair. Photo by Richard Foss

You can’t really complain about the balance of anything called “garlic lover’s pasta” because you expect the culinary equivalent of being hit with a brick made entirely of garlic. That didn’t happen because the garlic had been roasted to mute the sharpness and toasted for extra sweetness, but if you like garlic you will get your money’s worth. The sauce also contained sweet campari tomatoes (a cultivar by that name, not tomatoes in the Italian liqueur), and a dash of chili and basil, but it’s no surprise that the garlic was dominant. One of the people got it vegetarian, the other with grilled shrimp, and I thought the shrimp flavor was lost in the shuffle. It’s offered with salmon too, and I think I’d suggest ordering that variant because it would have more flavor than the shrimp and would stand out.

Another possible accompaniment to that dish could be the lamb sausage that was on the pizza. It had nice peppery notes that would stand up to the onslaught of garlic. The pizza itself had a very good crust and the use of mint and za’atar as toppings was innovative, but there was a bit too much ricotta cheese my tastes. I’d order it again but ask the kitchen to back off a bit on the cheese, because a Lebanese-style pizza was a thing I didn’t know I wanted until I tried it.

There is a fine wine and beer list here, but if you’re a cocktail fan I’d recommend careful study of that part of the menu. The amusingly named “Aperol hissy fit” used that bitter, citrusy liqueur with vodka, fresh grapes, mint, and lemon juice. It’s a new use for an old standard. The “smoke of Scotland” and cucumber lemonade were hits too. Whoever invented these drinks has a fine sense of flavor.

We tried two desserts, the affogato and an exceptional espresso ice cream sandwich (that was really an ice cream cake, but who cares about nomenclature when it’s this good). Our meals ran about $50 per person, including drinks, tax, and tip, which was pretty remarkable for food of this quality. It did help that we were there on a Monday when some excellent deals are offered on three-course meals, though only two members of our party actually ordered these.

I liked the food so much that I went back for lunch and got a burger with habanero guacamole and fries. The restaurant was packed with businesspeople from nearby buildings, but service was quick and friendly, and the burger was excellent. Jackson’s is a local institution that has a well-deserved following, a family restaurant that is fine enough for a date night place whatever you decide to do afterward.