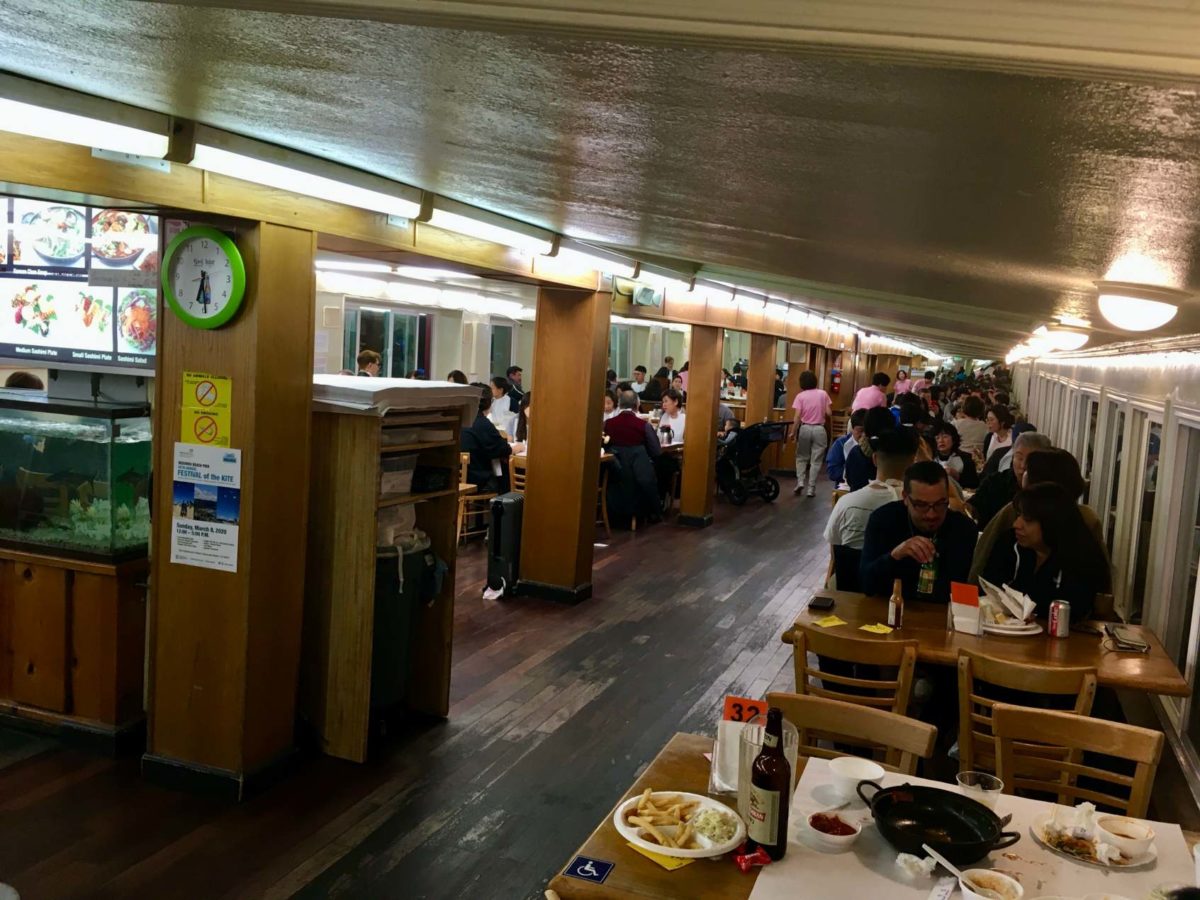 I was talking with a friend by the name of Han about the lack of Korean restaurants in the beach cities, and he told me something surprising.

“A restaurant on the Redondo pier was written up in a Korean travel guide, and it’s a regular stop for tourists from Seoul. It’s especially popular now because Dungeness crabs are in season, but I don’t think most people who live in the area know about it. Want to go?”

That’s not the kind of invitation I turn down, so we headed for the Pacific Fish Center. It is a place I had passed by hundreds of times without giving it a second thought. It’s in an area of the pier mostly populated by fishermen, and doesn’t look any more upscale than the places around the central plaza that serve cheap fried fish platters. The only outward differences were that there were several tanks of live seafood, and the sign over the door was in both Korean and English. The faded plastic menu on the wall included the fried fish combos that are served everywhere, but also sashimi, whole steamed crabs, and sea squirt. Seeing that last item on the menu confirmed that they have a large Korean clientele. Sea squirts have a slightly metallic flavor that few others appreciate.

We were there for the items that made Pacific Fish Center famous: steamed whole crab and spicy seafood stew. I looked longingly at a sashimi platter and considered it as an appetizer, but Han told me we had already ordered plenty. That was more than accurate, because we had ordered one crab each and the soup to share, and one crab would have been sufficient. It took at least 20 minutes for our meal to be delivered 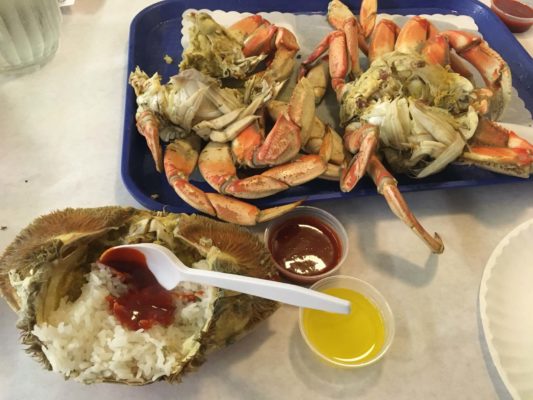 The crabs are served with the shell removed, and you take over from there. Photo by Richard Foss

because it takes time to steam crabs. This isn’t a meal you order if you’re in a hurry. On arrival our server detached the top shell without breaking it and flipped it over, so you can fill it with rice and soak up the tasty juice. Besides the rice, we received kimchi and melted butter. I also requested gochujang, the tangy spiced bean paste that is a popular Korean condiment.

Fresh Dungeness crabs are only available in winter. The meat is not as oily and flavorful as Chesapeake and New England blue crabs, but many people prefer its mild sweetness. Nature has armored them the way it usually does tasty critters, so getting at the good parts can be a challenge. The body meat is interspersed with thin layers of shell, which you quickly learn to avoid, and the gills which have an unpleasant flavor. Everything else is fair game, and whether you get all the tasty little bits depends on how patient you are. You have to crack the legs and claws. A hammer is provided, but you quickly learn to tap gently in order to avoid smashing the shell into bits. Some people around us just sought the easy targets, others scavenged for every morsel, but no matter what you do it won’t be done neatly. Bibs are provided, but even so I recommend wearing old clothes when you dine here. 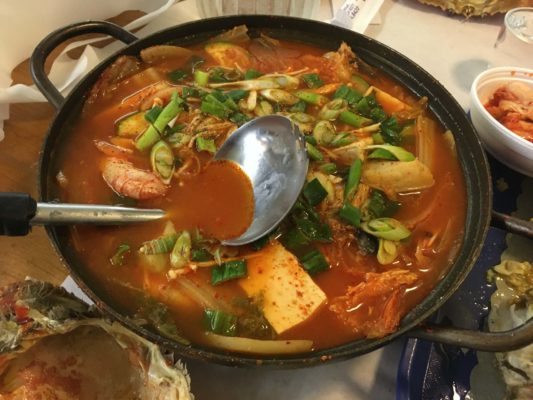 The spicy seafood stew has plenty of shrimp, fish, and vegetables.

You might want to wear those older clothes even if you don’t order crab, because the broth for the stew has plenty of vinegar and red pepper, a combination that will stain clothing on contact. (Ask me how I know.) Both the stew and the kimchi that arrived with it were on the mild side, though still very flavorful. There was plenty of fish and shrimp in a spicy broth that also contained tofu, squash, nappa cabbage, onions, and chopped scallions. It was rich and peppery without being fiery, so the flavor of the seafood came through clearly. Partway through the stew a server brought us a side dish of a seaweed, carrot, and turnip mix that had been marinated in a slightly sweet sauce. This is excellent at cooling down the heat for those who find even mild Korean flavors a little too hearty.

The two crabs, fish stew, and a bottle of Korean soju ran about $80 each, which sounds like a lot but we had really ordered enough for three people and took a lot home. A few days later I returned with my wife to try their sashimi and standard pier favorites. Sashimi comes in two sizes, one enough for a full meal for one person and another glorious arrangement that will feed at least three, possibly more. We looked enviously at the large one, but ordered the small one that included halibut, salmon, tuna, sea bass, and surf clams. These were neatly arranged over a bed of shredded daikon and garnished with sprouts, pickled carrots and green onion, shiso leaves, lemon, ginger, and wasabi. We knew that it was truly fresh, because next to the counter where we ordered was a tank in which halibut gloomily contemplated their fate. At $30 this platter was a bargain, though delivered without the ceremony and style you’d expect in an upscale sushi bar. The servers are businesslike, delivering food and heading to the next table without chatting. This is typical of Korean restaurants, but surprises those who are used to conversation with the staff. 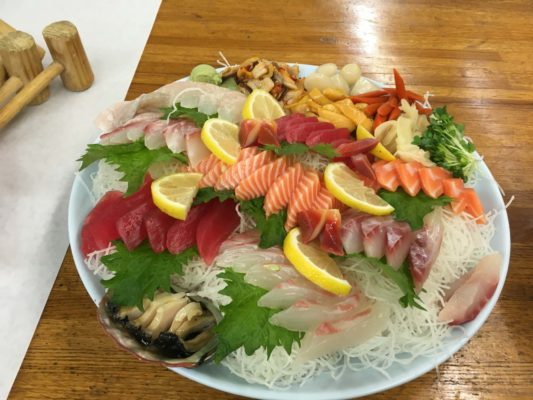 The large sashimi that was delivered to a neighboring table, with crab hammers awaiting use. Photo by Richard Foss

My wife ordered a combination plate that included fried fish, scallops, and shrimp over french fries and a side of cabbage salad with a miso-based dressing. It is neither a compliment nor an insult to say that we got exactly what we expected, fresh seafood in a mildly seasoned batter along with the usual commercial grade french fries. It arrived hot with the batter crisp, it was tasty and not overdone, and it was soon gone. Ketchup, tartar sauce, hot sauce, and gochujang were provided on the side, allowing us to add flavors and play with our food.

The standard beers and micro bottles of wine were available, but we decided to have soju and bekseju instead. Soju is becoming popular as a fresh tasting, low proof vodka, but bekseju is less well known. This type of soju is infused with ginseng, and has a pleasant aromatic woodsy scent because of it. We liked it enough that the next day I went to an Asian market in Torrance to buy some to enjoy at home.

As we dined, we enjoyed the bustle of the local Asian community at play. A group of businessmen in suits ordered the big platter of sashimi and more crabs than it seemed they could possibly consume. They were toasting each other ceremonially as we left. At other tables families chatted animatedly, and a couple who had the unmistakable shy moves of people on a first date lingered over their seafood stew for so long that it was probably getting cold without them noticing. The room here is slightly shabby, the floor scarred after decades of carts traveling down the aisle delivering seafood, but the feeling of the place is warm and friendly.

If you want an upscale environment with genial service you should look elsewhere, but if you feel like enjoying the food and the rhythms of a different community, this could be worth a visit for you.