Advertisement
Added on May 28, 2020  Bondo Wyszpolski  Andy and Renee , Dylanfest 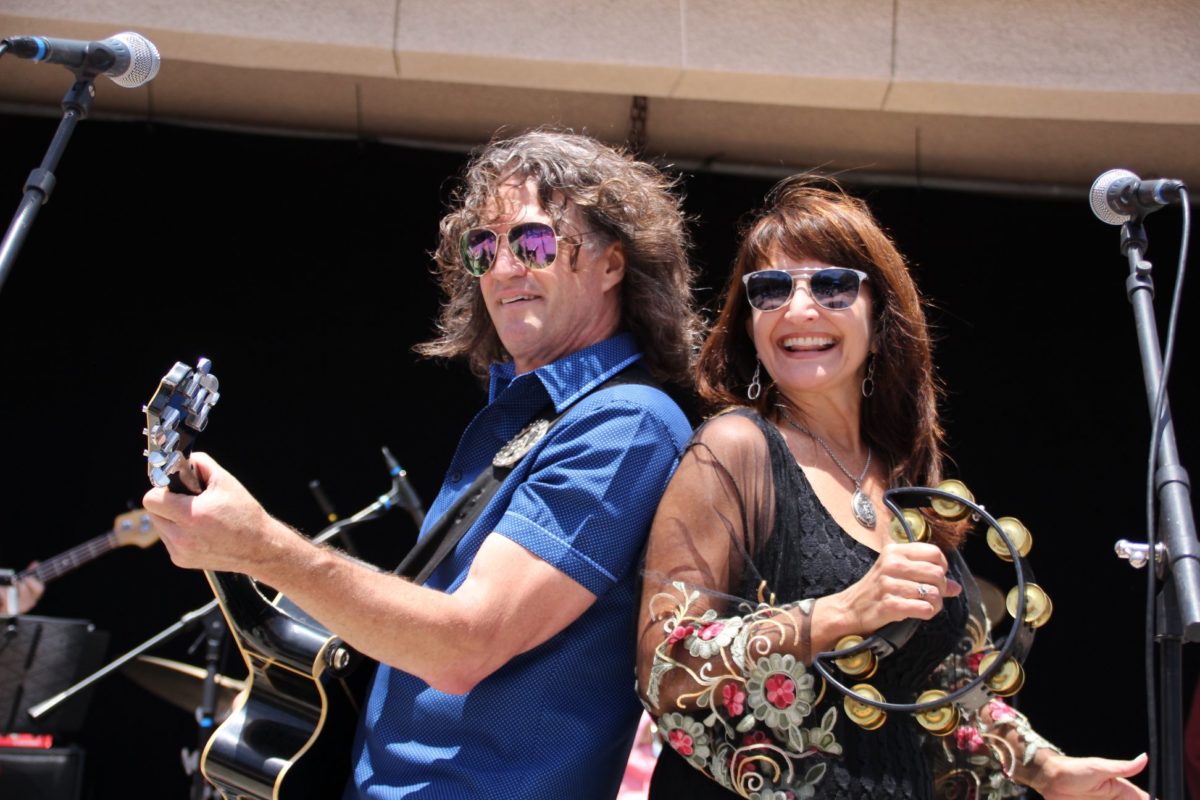 Andy & Renee: the show goes on

Come rain or shine or virus, Dylanfest is here

This year’s Dylanfest, presented by the South Bay music duo Andy and Renee, is celebrating its 30th anniversary. The live concert was scheduled for May 30. Not surprisingly, some changes were made, but it all comes down to this: The show will go on, live-streamed this Friday, Saturday, and Sunday, and tentatively returning on stage in September. Here’s what you need to know.

Easy Reader: When did it hit you that the scheduled all-day concert wouldn’t go on? Was it when you were informed by the Torrance Cultural Arts Center, or before?

Andy and Renee: “We didn’t cancel until we heard from the TCAC. Tickets had gone on sale in January and we’re happy to report that most patrons are applying the funds to the possible Sept. 26 show.”

ER: What were your first reactions, apart from the inevitable disappointment?

A&R: “Well, when the pandemic hit, a bigger question for us than Dylanfest was ‘How do we make a living?’ Ten years ago we had experimented with online streaming, and we hated it. But Renee had the perfect combination of intelligence, determination, and most of all nerve, to take it on the second time around. We began producing shows before we knew what we were doing. It was like when we were both little kids: We’d go around the neighborhood and sell tickets to the play we were going to do later that afternoon… Then we’d sit down to write the play, etc…Our first shows had a multitude of issues. Within two to three weeks we were streaming pretty good quality stuff in terms of both sound and picture. Our audience is generous and forgiving and stuck with us along the learning curve.

“All of this is to say that Dylanfest, normally looming like a thundercloud over our heads at this time of the year, was on the back burner. We’d think about it, panic appropriately, and then have to get back to a more immediate pressing issue. When it was finally officially postponed, we had our sea legs as far as live streaming goes, and that gave us the mental space to imagine a virtual Dylanfest.” 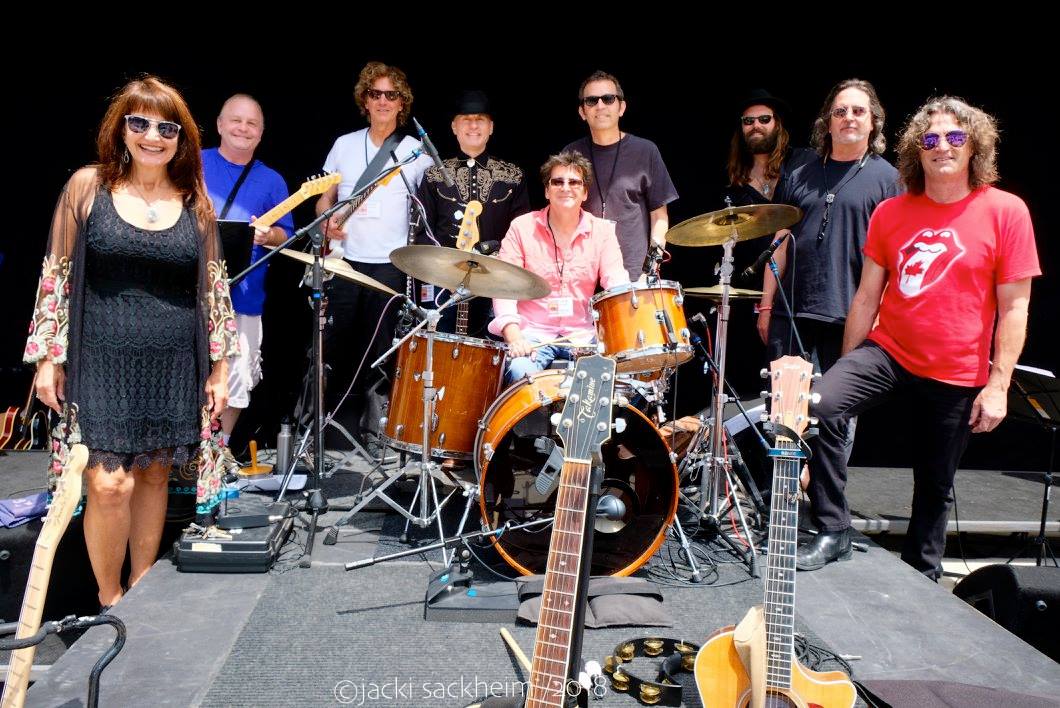 Andy & Renee and more gifted musicians than you can shake a stick at. Photo © 2018 by Jacki Sackheim

ER: Did you envision the live-streaming event taking place in three-hour increments over three days, or did that come later?

A&R: “Pretty quickly we felt that although a lot of people will travel to a beautiful arts plaza, where they can buy food and drinks and sit in the warmth of the sun all day, and enjoy the entertainment of 60 musicians over the course of eight hours, not many people will sit in front of their computer screen for an eight-hour stretch. So we quickly embraced the idea of three three-hour segments. Which opened up other possibilities as well.”

ER: With the live-streaming event now set, have you cancelled the Sept. 26 show, or would you possibly still hold a concert on that date if there’s an “all clear” from the city? (I know this sounds like I’m asking if there could possibly be two Dylanfests in 2020, but on the other hand the first one isn’t taking place before a live audience.)

A&R: “Our first calling is live performance so, yes, if the city opens up we will do a live show Sept. 26, for a live audience. With everyone in isolation, most performances for virtual Dylanfest are solos. Often these recordings are powerful and intimate, like many of the great Dylan recordings themselves. But it means that many great musicians who are not necessarily singers are absent. These people are not just talented players. Some are dear friends. So for us, one of the specific honors of the live show, if we can do it, will be to once again share the stage with these folks creating that sound. So we shall see.”

ER: If you’re presenting three events at three hours each that equals nine hours, and usually (if I’m not mistaken) the Dylanfest events run eight hours. If so, does this mean you’ll present more music (more acts) than usual?

A&R: “Yes! There is not much good that comes out of a pandemic. But there is a little. Cleaner air, less traffic, less crime and we don’t have to shut down at 8:30!” 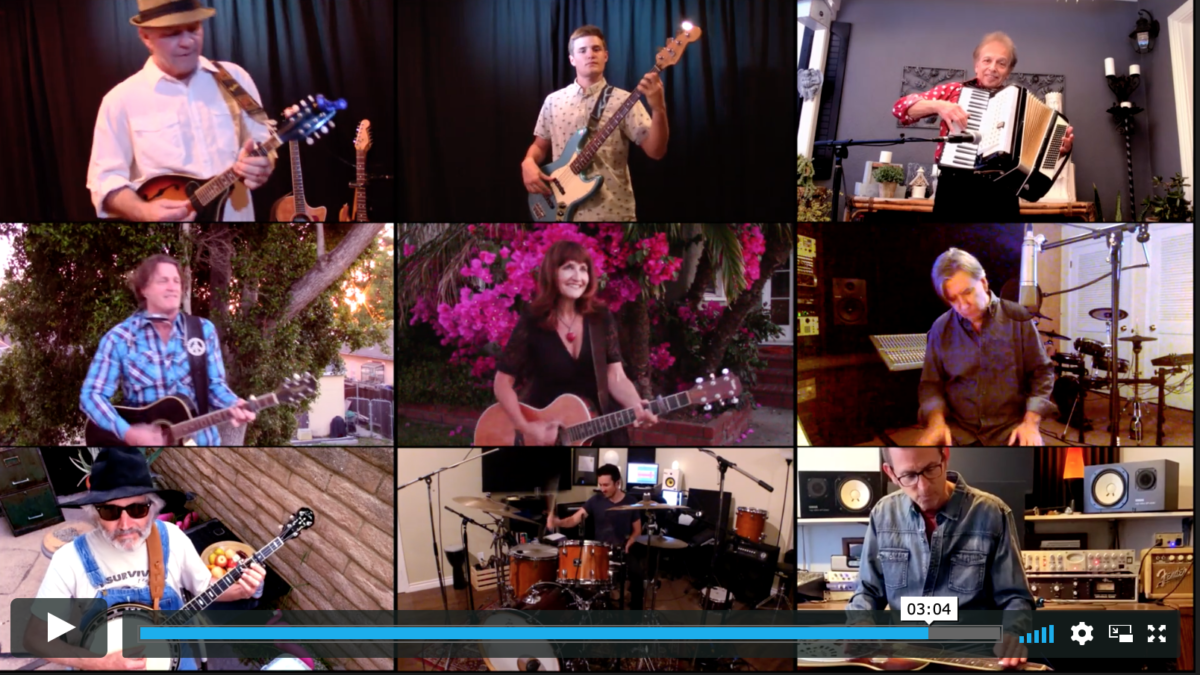 ER: This question ties in with the one above: Don’t you usually feature about 40 artists, doing about 60 songs total? Will it be relatively the same figures this time?

A&R: “We usually get through at least 60 songs. I think the world record was about 65 in the olden days when we were still in the backyard going ‘til midnight and getting shut down by the cops. This year, since there will be zero time needed to switch from one artist to the next we can fill up all that changeover time with more songs! Each segment will feature 24 songs, so a record 72 songs, with NO repeats! We are especially delighted by this part.

“The other great thing is that we will be joined by some artists that have either never performed or rarely performed, because of geographical or scheduling issues. Wade Preston will be with us. He lives in Pennsylvania and was a fixture in the South Bay in the late ‘80s and ‘90s, but relocated to perform on Broadway. Shana Morrison, daughter of Van Morrison will be a first timer. Aimee Mann of ‘Til Tuesday (“Voices Carry”) has submitted a song. International guests include Leah West and Mike Tanner from Canada and Al Diesen from Italy.”

ER: How much work was it to get all of this coordinated and organized? Was it more work than usual, or just different? And, for that matter, were there some artists who wanted to participate but who maybe didn’t have access to the requisite technology?

A&R: “Way more work—but worse, work that we didn’t know how to do. I bow at the altar of Renee Safier for taking this on. I’ve said many times before, that if it were up to me, there would still be 29 Dylanfests before us and they would include some amazing guests. But the fact that there is anyone in the audience, anyone watching it on YouTube or Facebook, anyone buying a ticket or a shirt or mug? That is all Renee. What she doesn’t know, she learns, and I’m lucky to have hitched my wagon to that star.

“We did have a few people who declined because of the technical issues.” 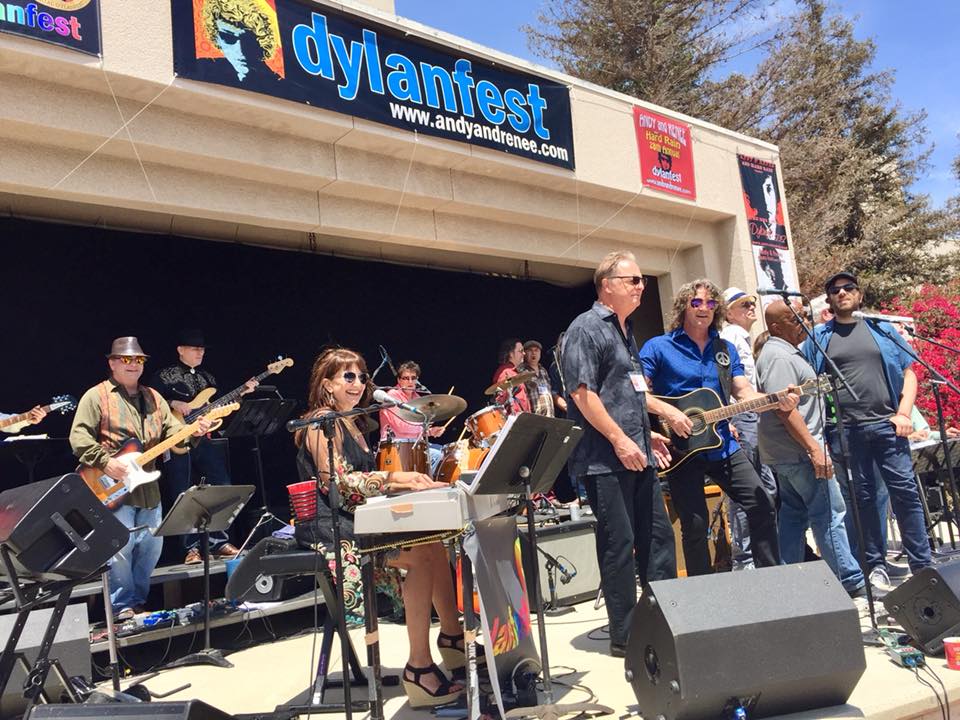 Dylanfest on the Torino Plaza at the Torrance Cultural Arts Center

ER: There’s not room to mention all 40 artists and what each will perform, but are there maybe four or five artists that you’d like to single out and say a few words about?

A&R: “In addition to the aforementioned new artists, we’re delighted to welcome Ryan Hedgecock, formerly the guitar player for Lone Justice, who tells a fascinating story of the day he met Dylan to learn one of his songs. Viewers will love Joel Raphael, Jamie Daniels of the Jack of Hearts Band, Kelly Fitzgerald (finally!), singer/piano player from John Fogerty’s band Bob Malone, and of course our own Marty Rifkin on pedal steel, and the rest of the guys in Hard Rain.”

ER: Are we going to hear some older Dylan songs for the first time? I know that when we spoke at length in advance of Dylanfest #27 there were many, many that hadn’t yet made an appearance at one of your events.

A&R: “You bet. There are five songs this year that have never been performed in 29 previous years. Maybe the most interesting is “Go Away Little Boy”. The song was written by Dylan for Maria McKee of Lone Justice in the ‘80s, and was not even listed on Dylan’s website.”

ER: Speaking of which, the Master recently released two new songs, one of which is about as long as “Highlands” on the “Time Out of Mind” album. Will these be performed?

A&R: “No! To the surprise of exactly no one, The 17-minute epic “Murder Most Foul”, which I listened to six times straight the night it dropped, was not selected by any of the artists.”

ER: What are you most looking forward to regarding Dylanfest #30? And how do you think live-streaming it will affect future Dylanfests in the years to come?

A&R: “There’s a chance that we’ll be able to enjoy more of the show, since so much of it is prerecorded. When it’s live, we are only offstage for a song or two at a time, and so we only get to hear things when we listen to the recording later. It will be nice to experience a lot of the show with the audience members.

“Live-streaming will be part of our shows in general from here on out. It’s our hope that with live-streaming, Dylanfest might reach beyond our local audience.”

The three Dylanfest shows are free to watch, but the option to contribute will be there for those who are in a position to do so. You can contribute now at www.andyandrenee.com/store.php, PayPal (paypal.me/andyandrenee) or Venmo, (venmo.com/Renee-Safier). A portion of the proceeds will go to the Los Angeles Midnight Mission and Feeding America. We are sustained by the generosity and support of the fans who love the music, and who donate as they are able. ER