Tom Bopp at the keys: Ragtime rolls into El Segundo 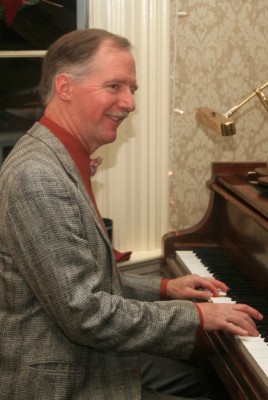 Tom Bopp at the keys: Ragtime rolls into El Segundo

Tom Bopp at the keys:
Ragtime rolls into El Segundo

Tom Bopp first touched the piano keys in 1962. He was five years old and his father brought home a $50 upright piano. He had no way of knowing then how much of his life he would spend at the ivories.

“I played by ear for four years,” Bopp said. “And evidently I did it so badly that my parents finally had to make me take lessons.”

The Bopp family lived in Torrance and found a local instructor, Laura Lee Lukas, to come teach young Tom. He studied classical piano under her for ten years but snuck off to play ragtime whenever he could.

In the mid-seventies, Miss Lukas was asked to give a concert at the Old Town Music Hall in El Segundo. The venue, run by Bill Field and the late Bill Coffman, had just installed a 9-foot, 92-note custom made Bösendorfer grand piano. The South Bay piano community was abuzz with excitement.

“When Miss Lukas was practicing for her concert, she wanted to give me the experience of playing that incredible instrument,” said Bopp, who was a teenager at the time. “I tried it out and practiced classics on it for an hour until she left.”

“Once she left, I started playing a Scott Joplin rag,” Bopp laughed. “That was Bill Coffman’s bag and he was in there with me. He asked me why I liked ragtime and I told him that it sounds like the way my grandmother used to play. He ran out of the room and came back with a stack of ragtime sheet music.”

Both Bill Coffman and Bill Field became great musical mentors for Bopp, inviting him to concerts and getting him to play amateur shows at the Maple Leaf Club in Santa Monica when he was just 17.

But by the time Bopp graduated from high school, he had become pragmatic about building a career and shied away from musical performance.

“I thought I wanted a trade to keep me close to music,” said Bopp. “I figured why not be a piano tuner? So I went to Piano Technicians Guild and they told me to take a correspondence course. I learned by mail how to do it and off I went.”

The tuning money paid for Bopp’s college education. He went to El Camino Community College and then the University of California at Los Angeles for music composing and theory.

“That was going to be my job, the tuning,” Bopp said. “I would still be doing it now if it weren’t for Mike Puggone.”

In 1982, Mike Puggone was opening a JoAnne’s Chili Bordello in Manhattan Beach and needed a cheap piano player at night. Puggone asked a friend at El Camino if he knew of anyone who played piano and his friend mentioned Bopp.

“Mike called me, I went and played for him, and he said ‘you’ll do,’” Bopp recalled. “I told him I only knew about a half hour’s worth of music and he said, ‘Don’t worry, kid. Just repeat it and nobody will notice.’ And they didn’t.”

JoAnne’s slogan was “17 varieties of chili served in an atmosphere of sin.”

“All the waitresses were good-looking girls in Victorian era corsets with garters and straps. But it was all very innocent,” Bopp laughed. “As least as far as I knew, it was. If it wasn’t, they didn’t let me in on it.”

Bopp got comfortable playing around people and became popular for his ragtime and old standards. Six months later, Bopp landed an audition at the Wawona Hotel in Yosemite Valley.

“They were inviting piano players up for one week at a time as a tryout. So I did a week, then the guy who was supposed to play after me couldn’t make it so I stayed a second week. And then the owner said, ‘I don’t know who these other guys are that are coming up to play but I like you. How would you like the job?’”

That was 30 years ago, when Bopp was 25. He has been there ever since.

Bopp was behind the piano when he met his wife, Diane, who taught art at Beverly Hills High School.

“She came up and gave art lessons in Yosemite Valley and she would stop by and listen to the piano player at the Wawona, me,” he said. “She was good looking but she always had some giant boyfriend with her who was bigger than me. Finally she came in without the giant boyfriend, and we got to talking.”

The talking led to letter-writing, beginning an old-fashioned courtship that was necessitated by the couple’s distance.

“I remember in one letter I asked her, ‘What is your philosophy on art?’’ said Bopp. “And she wrote back, ‘I am, therefore I make stuff.’ And I still think that is the most concise and lucid explanation of why people make art.”

Tom and Diane live in a woodsy corner of Fish Camp near Wawona. He still plays at the Wawona nightly, offering “everything from cabaret songs, antique salon music, cowboy ditties, leftovers from long-ago classical piano lessons, Depression-era tunes, and ragtime.” And though musical tastes have changed in his 55 years, he still sees people of all ages drawn to the music of the first half of the 20th century.

There is a reason people are still attracted to this old music,” Bopp said. “Back when the industry was fueled by selling sheet music in drug stores as much as it was by anything else, you had the best and brightest musicians, Joplin, the Gershwins, Cole Porter, and who were they trying to sell their music to? Aunt Minnie at home who would go get the music and learn it at home. That was their market.”

“That’s why this music lasts. You don’t need production value or recording to make it sound good. You can do it. You can sit at home and sing it and play it and it’ll sound good.”