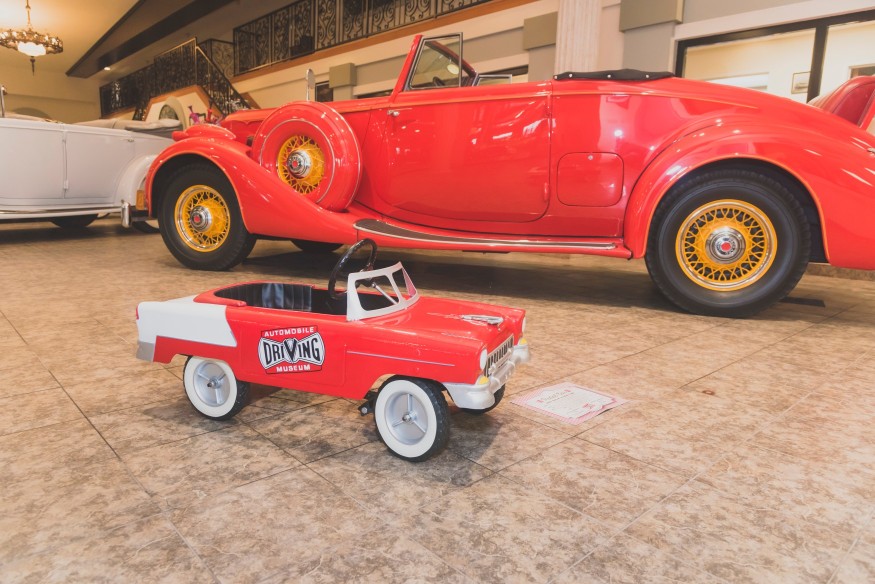 At first glance, the idea behind an Automobile Driving Museum seems a bit fuzzy. If a museum is filled with cars, even some relatively modern and affordable cars, shouldn’t it be called, well, a car museum?

As often happens, though, my preconceptions about El Segundo’s ADM, as it is abbreviated, fell away the second I actually went there. A driving museum makes perfect sense, celebrating the human experience of driving in a world in which we tend to spend far too much attention on the things in our lives, and not enough attention to our lives themselves.

I’m a car guy — I’ve broken them, fixed them, raced them, tested them, written about them, loved them, hated them, crashed them and made love in them. So the power of seeing, smelling and touching a wide range of the cars that have punctuated and populated my life, and my father’s and mother’s lives, and my kids’ lives, may be stronger for me than for most. But it sure works for me.

Forward into the past

Most of the 130 featured cars here were built (way) before my time, but right in the sweet spot for my parents and their parents. I found that being near, and sometimes in, these cars brought back memories, some of which I never even knew I had. Old stories and photos from my parent’s lives are inhabited by the progression of auto style and technology. Seeing these cars, in a real, driveable and touchable setting, set off a flood of feelings that surprised the hell out of me.

Life of a salesman

Here is a black, 1941 Dodge Business Coupe, the kind of car a traveling salesman, like my father after the war, would have driven making his rounds. His father, creeping into his 90s, had a nearly identical Plymouth Business Coupe stashed in his barn in Upstate New York. When he died — I was about 14 at the time —I  begged my father to let me keep it, promising to restore it as my first car. He said no. He didn’t want an old junker messing up our pristine suburban Connecticut driveway, right where our neighbor — my dad’s boss — would see it every morning. So it’s one that got away. 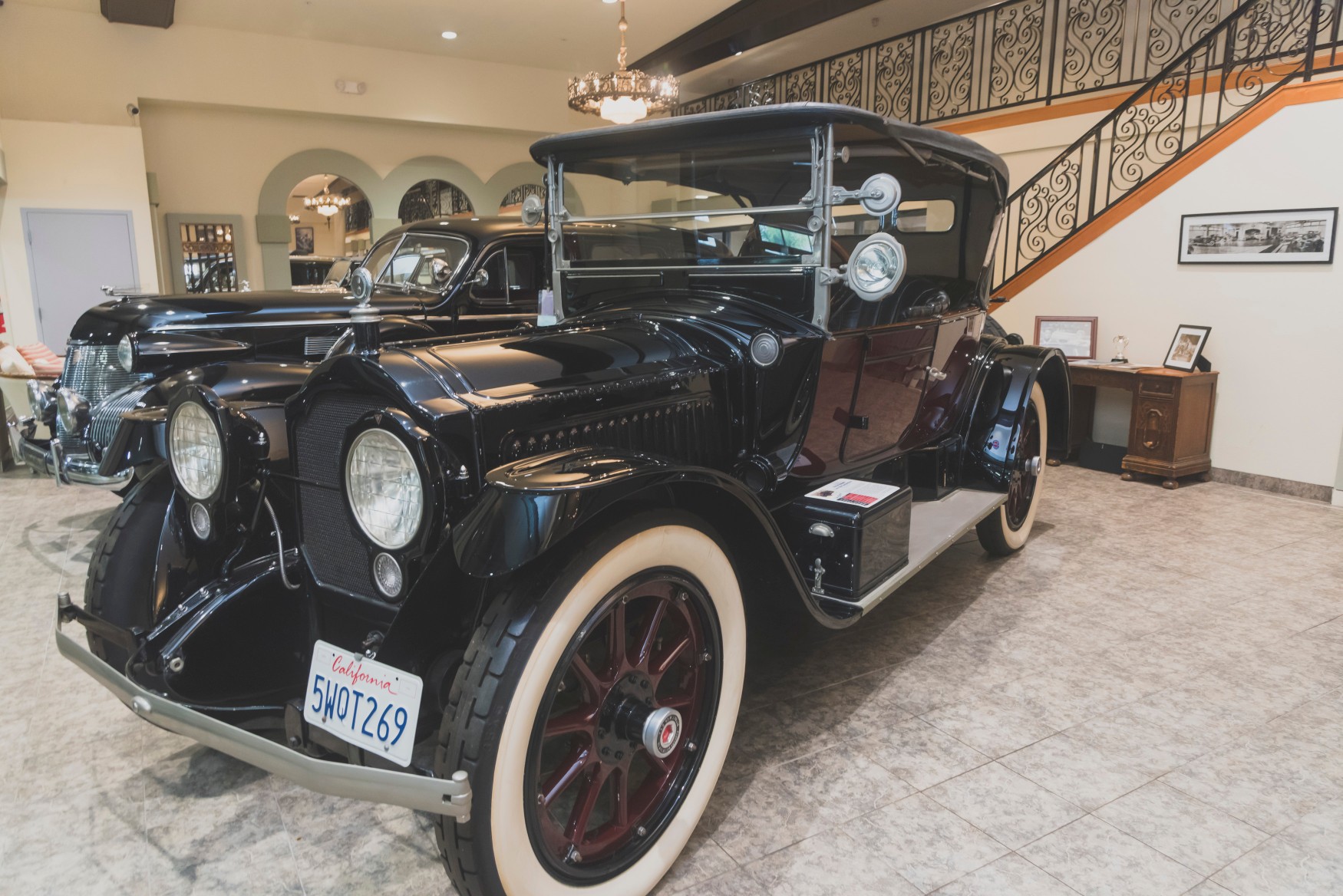 Charlie Brown and the Model T

Behold, a late-1920s Model T Ford. We have a photo of my very young father, dressed like Charlie Brown in knee socks and a jagged-stripe sweater, sitting in his dad’s Model T soft-top pickup, surrounded by his mother, his sister, and his tall, smiling Uncle Tiff. My grandfather, who had taken the picture, had just driven the car to Morehouse Lake, a tiny puddle in the Adirondack Mountains of New York. it was the first car to ever make the rutted, hilly, muddy passage.

The MGA and the pigeon

In the museum website’s Virtual Tour (but not, alas, on the museum floor the day I visited) appears a late ‘50s, baby-blue MGA, a surprisingly swoopy, sensual British sports car. The British have a way, of, ahem, dropping the ball when it comes to elegant design. But the MGA was, and still is, just knock-out gorgeous. I had one in 1978. As usual, a fixer-upper. It was a terrifying Hershey Bar brown, but as I drove and restored it, replacing the carpet and upholstery, and rebuilding the engine and transmission, I envisioned it in a new coat of cream, with the bright-red interior setting it off.

One day in ‘78, as I walked out from work, I found a slightly confused pigeon perched on my MGA. He came home with me, and for about three days, until he decided to fly on, I had my own pet pigeon, cooing and strutting on my Topanga Canyon porch. Named him Walter, of course. Seeing this MGA brought back the feel of the tiny car, which my big-car friends called a go-cart, the huge, spindly steering wheel, the rear tires wanting to slide and overtake the fronts, the smell of the slightly musty leather.

A ‘60s Volkswagen Microbus, this one with the wonderful skylights built into the roof. On Christmas break from college, in 1972, six or seven fellow hippies and I piled into one for the cross-country trip from Connecticut to Colorado, for a “directed study” class at U of C Boulder. The trip was long, cramped, bohemian and drug-related — and one I will never forget. Most of it, anyway.

A Morgan 3-Wheeler comes into view: a bizarre, prewar contraption designed to cheaply seat two, side by side, with two wheels and a motorcycle engine in front and a single wire-spoke, motorcycle-type wheel in back. The chassis of the 1930s version was made of laminated wood, of all things.

I became friends with Jay Leno in the 1980s, as a result of our shared obsession with all things car and motorcycle. I worked at Motorcyclist Magazine on the Sunset Strip, and Jay would drop by whenever he added a new/old toy to his rapidly growing collection. One day he drove up in his own Morgan 3-Wheeler, and insisted we go out onto the West Hollywood streets for a spin.

Which was fine, until the shifting mechanism for the gearbox decided to vibrate itself into a large pile of small pieces. Jay had to dive down into the footwell of the machine, his blue-jeaned butt sticking up out of the cockpit as he fiddled with the errant nuts, links, bolts and washers. Passersby, on Santa Monica Boulevard, were understandably curious. He got the shifter back together, but not quite the way it had been designed, so we couldn’t get the gearbox into first gear. I wound up pushing the thing up the steep grade of La Cienega toward Sunset, Jay yelling encouragement as he slipped the clutch in third.

A Jeepster for your love

And here is a late-40s Jeepster, a fun-loving, flat-sided, open-air take on the basic Jeep concept that looks something like a front-engined Volkswagen Thing. A teenaged Mark Shipps, the son of my Dad’s boss, restored one across the street from our house in Connecticut. This was my first inkling that cars were something you could actually work on and fi x— wondrous objects of fun and frustration that were far more than tools and status symbols for our decidedly suburban lives.

The Dawn of Creation

How, you might ask, did the Automobile Driving Museum get here, tucked away in the warren of warehouses and workshops just south of Aerospace Row and the elevated 105: specifically, 610 Lairport Street in El Segundo.

Back in 2001, two hopelessly obsessed car nuts, Earl Rubenstein and Stanley Zimmerman, decided to start a museum that enabled its visitors to actually sit in and touch the cars in their collection, as opposed to the more usual car-museum protocol of protecting the cars from their greasy-fingered admirers. This would, they reasoned, allow viewers to connect more emotionally with the autos on display. They even decided to give rides in their precious cars, on the theory that regularly starting and running the cars in their collection would help keep their memories alive, and help keep the cars from deteriorating. 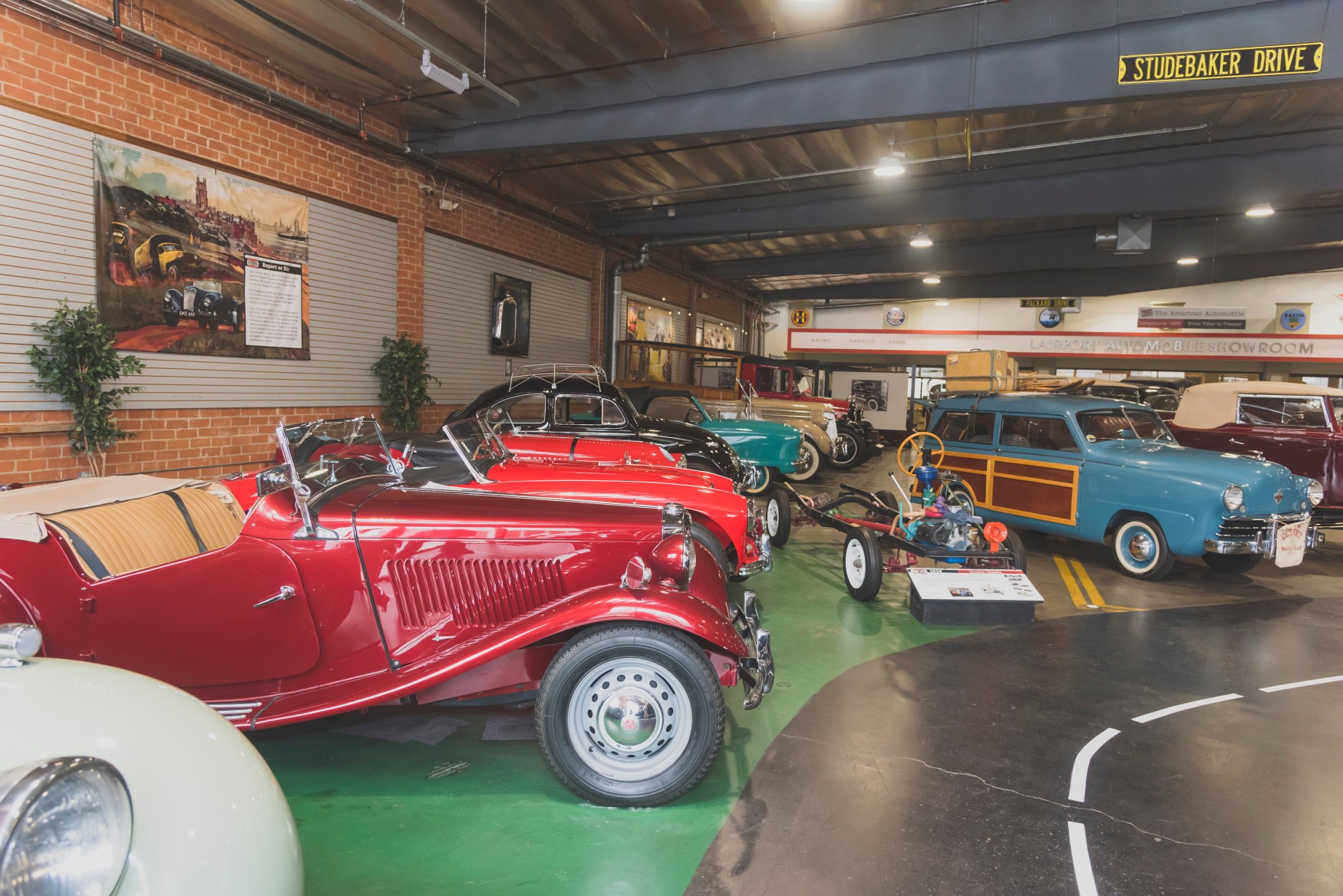 The small and memorable MG TD, Austin Healey, Morgan Plus 4 and, VW bug.

Earl and Stanley were also interested in collecting and displaying what they call “orphan” cars — makes that had gone out of business, but which still offered an important look into why certain makes had survived the obstacle course of long-term commerce, and why many others hadn’t, including Stutz, Packard, Nash, Studebaker, Pontiac and American Motors.

The Automobile Driving Museum moved into its present location in 2007, occupying over an acre of land and 40,000 square feet of display, storage, restoration and meeting space. You can rent the ballroom, ‘50s style coffee shop, and even the display spaces for meetings, weddings, Bar Mitzvahs, school outings and other celebrations.

The day I visited the ADM, there was a gaggle of young school girls taking a guided tour, learning the intricacies of hand-starting a 1912 Model T, the egalitarian wonders of mass production, and the creative significance of tail fins in post-war 1950s industrial design.

If you’ve ever loved a car, or loved somebody who has, you owe it to yourself to check out the ADM. Admission is cheap, from zero to $10 depending on age, the location is convenient, and the atmosphere is friendly and unpretentious.

Yes, there are rare, expensive cars displayed here, and some are surrounded by glass in a virtual showroom of high-end cars of the ‘20s and ‘30s. But for many viewers — myself included — the real appeal of the ADM is the flood of memories, many of them positive, some of them clear, that come with seeing, feeling and even smelling the cars of your life, in the metal, the way you experienced them the first time.

You can reach the ADM — and take a virtual tour—through their website. The museum is open Tuesday through Sunday, 10 a.m. to 4 p.m.. On Saturdays, visitors are allowed to sit in many of the display cars, and most Sundays feature short street rides, with docent drivers, in a selection of the museum’s collection. There are always events in the offing. I just missed a display of cars that inspired Hot Wheels toys. The Micro and Mini Car Show, featuring cars from the past that are just as cute as ladybugs, is coming October 20. The ADM also offers courses like Ladies Car Care 101, an apparently sexist yet very popular series that deconstructs the mysteries of car maintenance for drivers of the feminine persuasion.