ES dining – Hub for grub at The Proud Bird 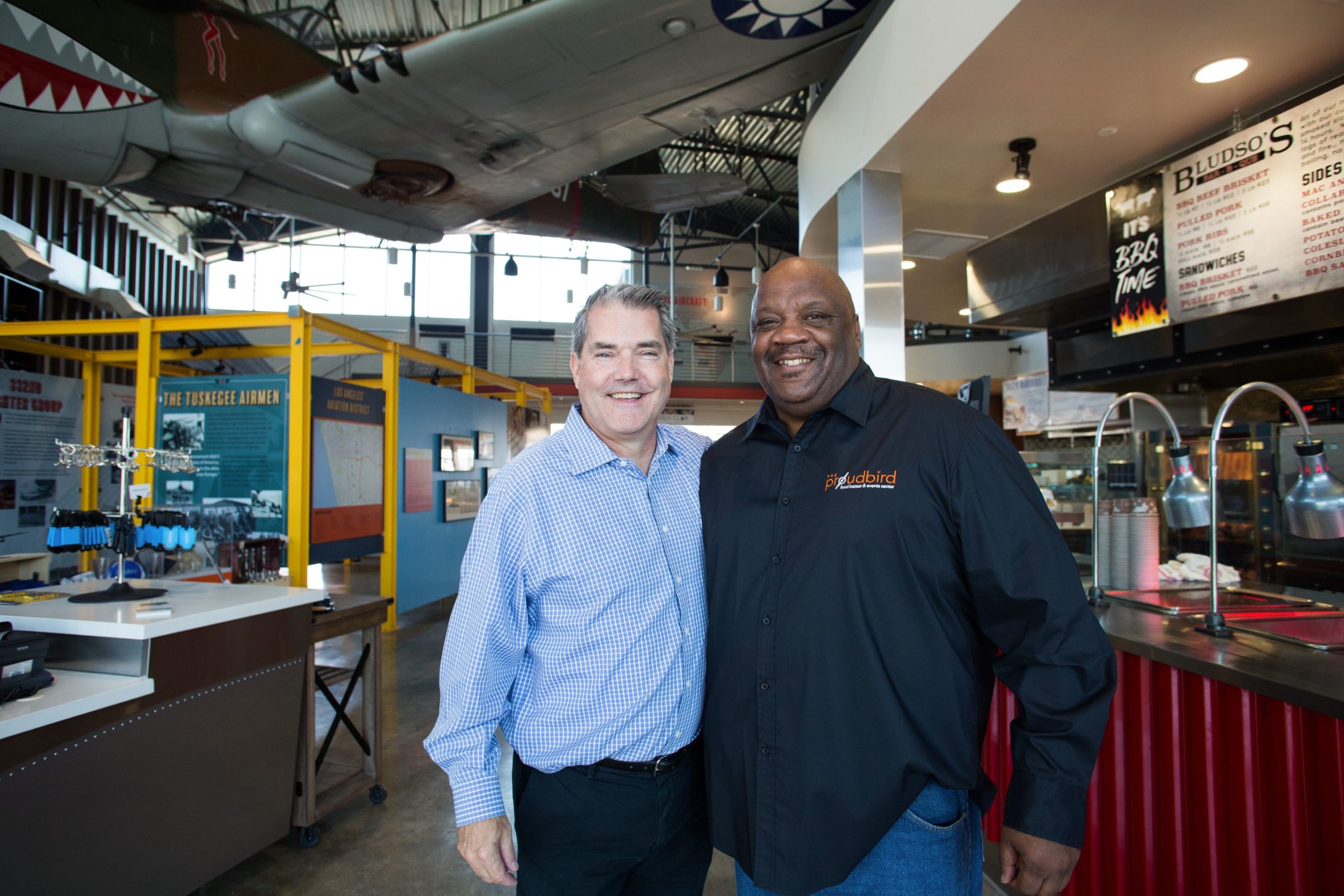 The Proud Bird is a paradox, eye-catching because of its collection of historic aircraft replicas, yet low profile because it’s on the edge of the airport, surrounded by cargo terminals. Everybody who drives by has seen it, though some pass for years without finding out that it’s actually a restaurant. Getting to it is something of a challenge, since by the time you can see the building well, you’ve already passed the side street that leads to their entrance.

This sounds like a recipe for failure, but the Proud Bird has been in business since 1967, supported by a crowd that includes aviation buffs who savor both the views of landing aircraft and the flight and space memorabilia that decorate the place. Tourists attracted by the novelty of the concept are another market, but so are locals who seek a good meal near the airport. The shift from the original table service to an upscale food bazaar made it possible to order and be served quickly, a plus for clock watchers on a lunch break or between flights, and also kept costs down. The several stations offer Americana like chicken and waffles, barbecue by the famous Bludso’s out of Compton, Thai and Chinese specialties, sandwiches, and pizza. No matter what you like there’s something for you here. 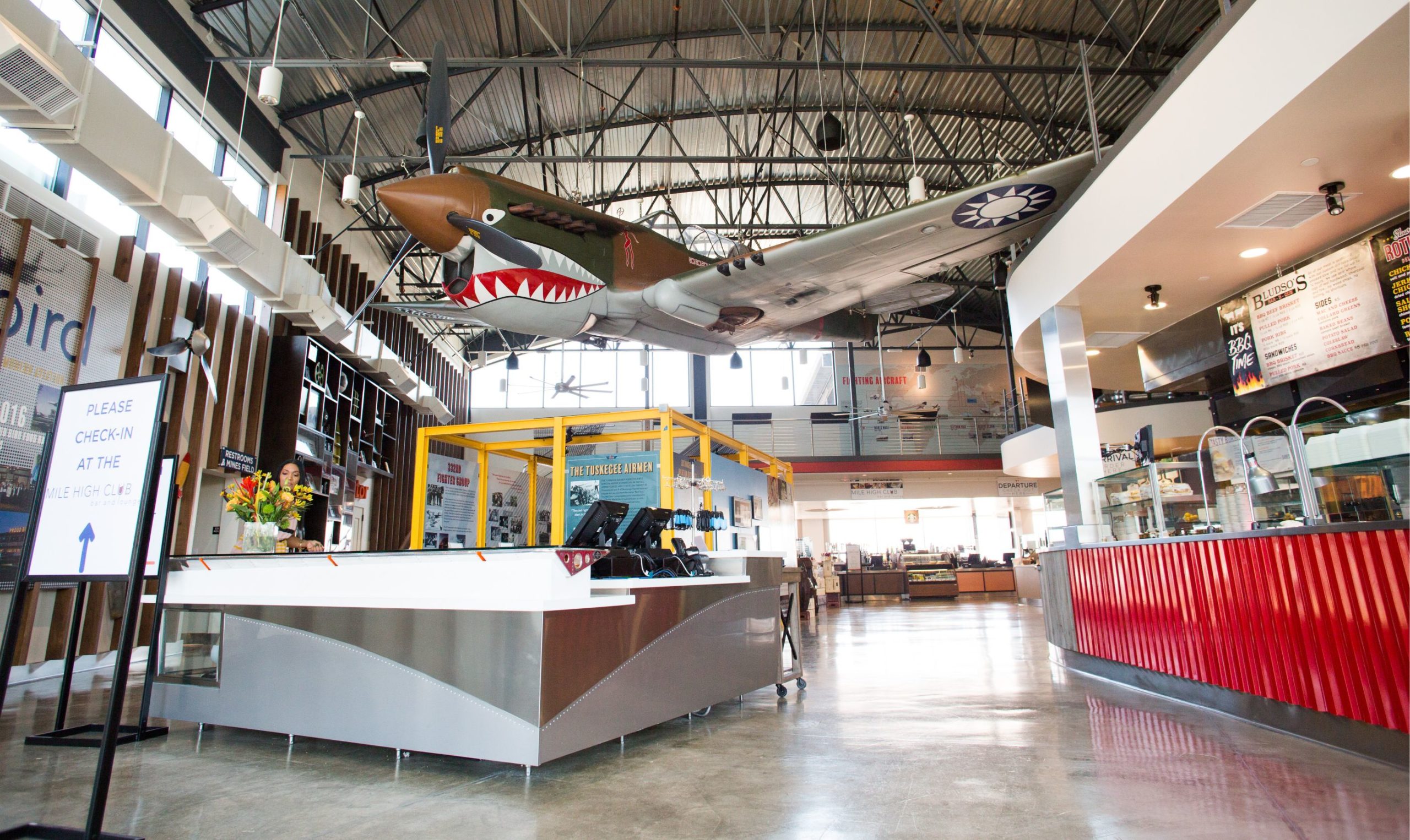 Proud Bird is an aviation buff’s as well as a foodie’s destination. Photo courtesy of Proud Bird.

Figuring out just what you are going to have is the first challenge, in fact. The menus are at each counter and not visible from any one place, so some strolling around is in order. If you decide you want things from several different counters you can order everything you want from any food cashier, but that’s isn’t explained anywhere, and whatever you decide on for food, you have to go to another line for beverages. It’s confusing, but you get used to it.

The first thing you see as you enter are the offerings from Bludso’s Barbecue, a famous establishment started in Compton. Owner Kevin Bludso was favorably disposed to opening in this space because his high school graduation party was held at the Proud Bird, and his meats are unquestionably the biggest draw. Most items are true Texas barbecue, meat liberally rubbed with spices and low-smoked, offered with a spicy sauce on the side. The salty spice rub was front and center on a recent order of ribs, and I would have preferred a bit less of it, but it just meant I drank a lot of water while cleaning every bit of meat off the bones. Another item from the same counter, salt-crusted short ribs, was slightly less successful. It had been given a different salt and herb rub, but was served well-done and slightly dry. It was still tender, but a bit of au jus or sauce would have improved it. 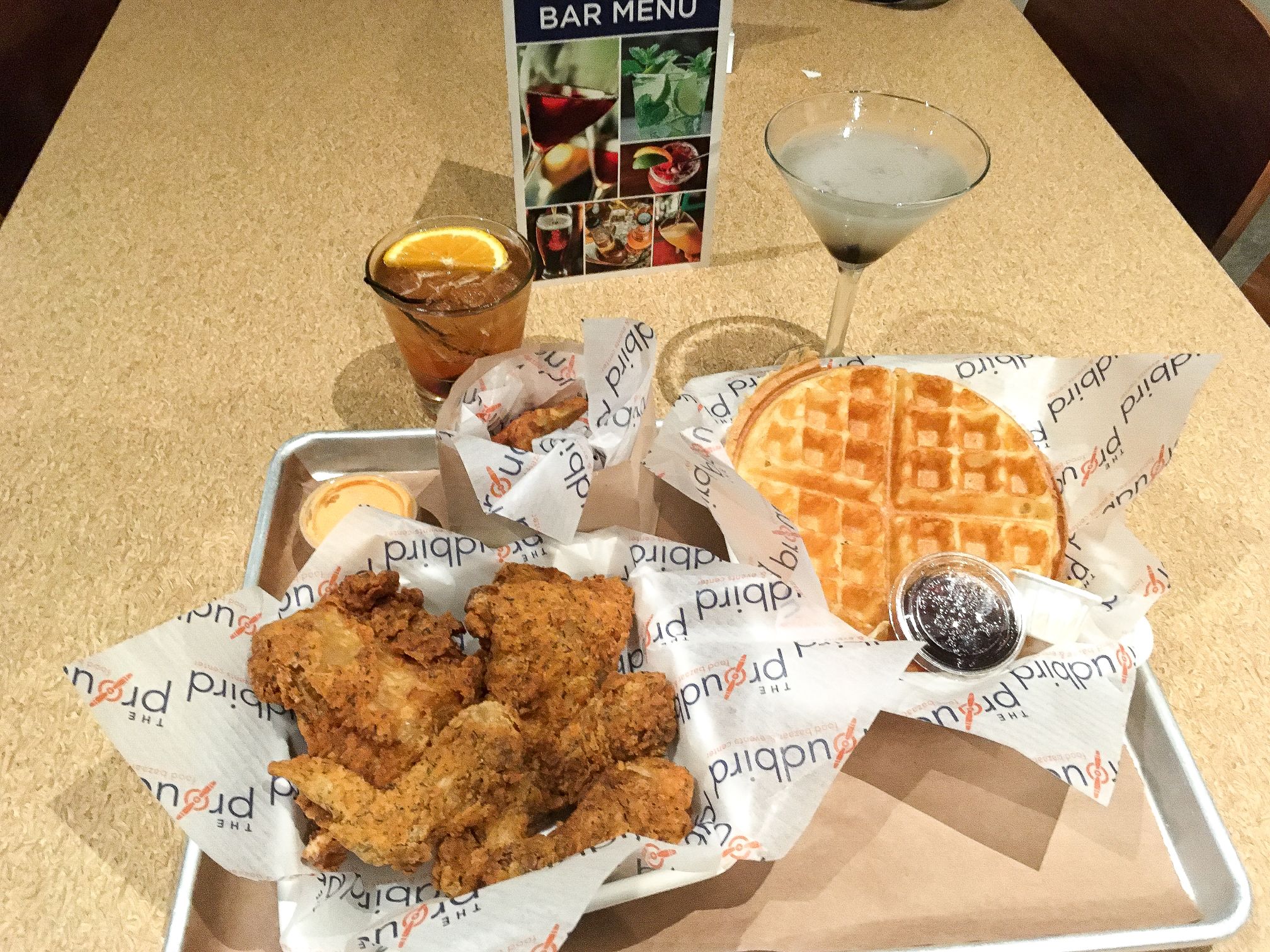 Chicken and Waffles may have originated as a Maryland after-church supper, but some historians credit a restaurant in Harlem. Photo by Richard Foss

The station next to Bludso’s offers salads, sandwiches, and the surprise standout item – chicken and waffles that put the famed Roscoe’s brand in the shade. The waffles are the malty yeast-raised Belgian style, crisp and light with a slightly most interior, which makes them wonderful when eaten fresh but probably not as attractive as a take-out item. I can only speculate about that because I always devour this waffle the moment it hits the table, and then turn to everything else afterwards. The batter on the chicken is nicely seasoned and crisp, and I’d guess that there’s some cornmeal in the flour to give the assertive crunch. Together they’re perfect. There are arguments about who came up with this combination, which is either a Maryland after-church supper or an invention of a restaurant in Harlem, but it’s as satisfying as ever.

We were slightly less enthusiastic about an order of jalapeno poppers, because they used big peppers cut large so you couldn’t actually pop a whole one in your mouth. They’re better as small, crisp morsels so you don’t have any possibility of the molten cheese going into your lap.

The salads that come from the same counter as the chicken are good too – the one with poke, edamame, pickled seaweed, and wonton chips had a nicely varied array of vegetables, and the California salad offered all the greens, sprouts, nuts, and dried fruit to give each bite variety. They get points for offering this with well-made green goddess dressing, a culinary rarity that was a hit when it was invented in 1923. That was based on sour cream, vinegar, lemon, and tarragon leaves, and though many variants followed it I like the classic best. This tasted a lot like the zesty, herbal original, and it went very well with this mix of greens.

The other items that we tried were a Thai red curry bowl, and their tangerine chicken. The chicken was a bit of a dud. It was too sweet – and yes, this dish always has some sweetness, but there’s usually some tangerine peel and ginger to add sharpness and balance. The ginger here was a whisper, the peel missing in action. The Thai red curry was much better, though many people who order it may think they’ve received the wrong item. Thais categorize curries as red, green, or yellow, depending on the base ingredient in the seasoning, and serve some curries in sauce and others dry. These noodles were served dry after being seasoned with a spice mix that includes coconut milk, red chillies and lemongrass, and they received approval from a person at our table who had lived in Thailand. The spicing was much milder than Thais make for themselves, but had quite enough seasoning to be interesting to the American palate.

As I mentioned, you have to make a separate trip to the bar to get beer, wine, or cocktails, but for those who enjoy mixed drinks it’s worth it. They make a strong but good Old Fashioned, and the “Aviator,” their take on the classic aviation cocktail, is surprisingly good. They use the cucumber-infused Hendricks gin instead of a more classic London dry, but it’s not overly sweet. The drinks are reasonably priced and freshly made, and you may want to order a second to drink while watching the comings and goings on the runway next door. That is best done from their outside tables by the fire pits, but if you’re going to take your drink there let the bartender know. Glass isn’t allowed outside.

The Proud Bird has odd hours and odder policies regarding them – the kitchen closes very early, at 8 p.m. midweek. Their happy hour runs from 5 to 8 p.m., meaning you can get discounts from the already moderate prices if you know to ask. It’s one of many quirks at this odd but generally successful landmark at the edge of everything, but right by one of the world’s great transportation hubs.