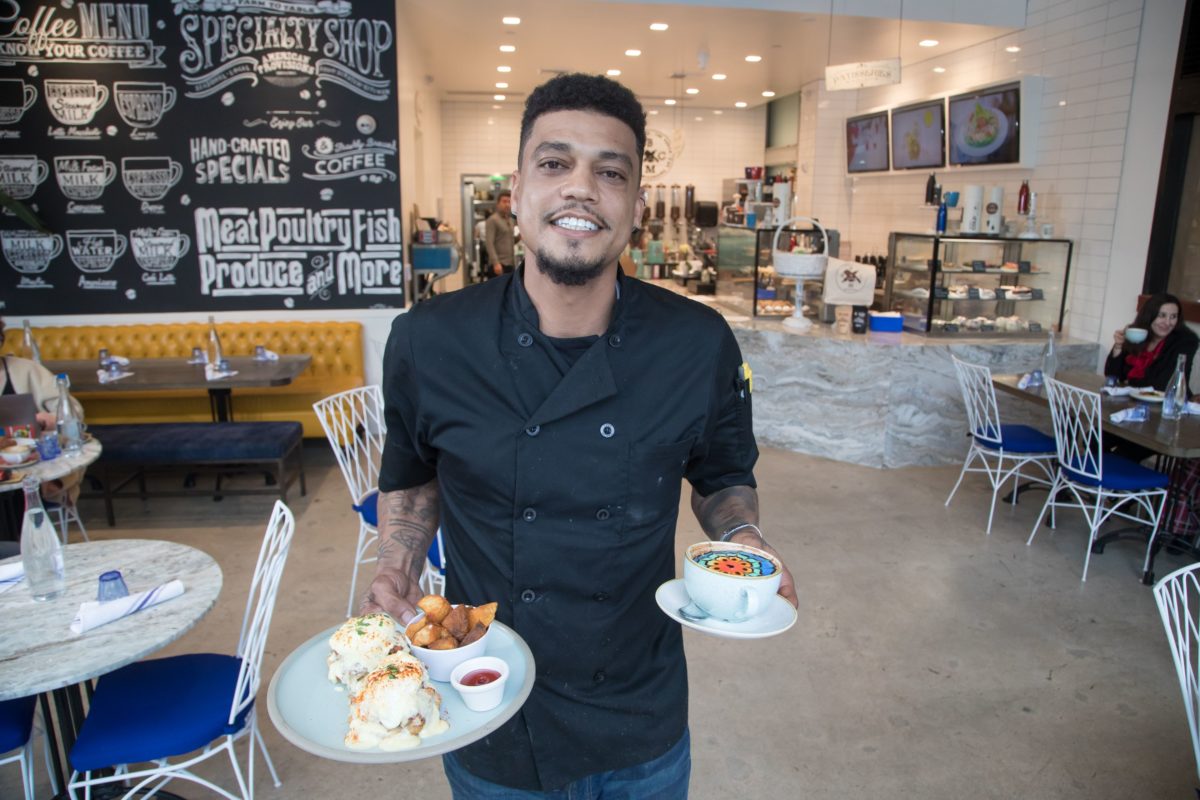 A restaurant that opened recently on Rosecrans doesn’t have a big sign outside, and I just figured out why. If sign makers charge by the letter, The Butcher, The Baker, And The Cappuccino Maker would spend a pretty penny to have one made. 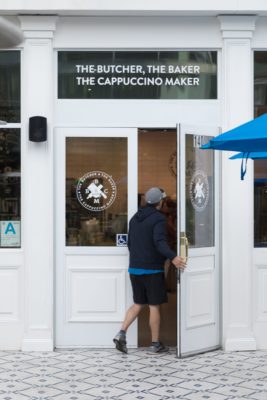 The black and white tiled patio and saloon door evoke the 1920s.

Someone tried to make up for this by putting the name directly above the doors in small print, but that strategy doesn’t work very well, particularly at night – one of my dining companions called to ask where it was while standing outside. Lack of signage aside, it is eye catching and attractive inside and out. The dazzling white and black tiled patio frames double doors that lead to an interior that is reminiscent of a 1920s cafe. Someone did quite a job of making this place look clean, bright, and distinctive, and the designer should be applauded.

The service model here is the type where you order at the counter and your food is delivered. From the line you have an excellent view of the pastries in their case. I suspect this was done for the same reason that magazines, candy, and other impulse purchase items are next to the check stands in supermarkets. They’re not what you came for, but once you see them, you want them. It worked on me, because on both visits to BBCM, I bought some of the prettier looking pastries.

This restaurant is an offshoot of a popular West Hollywood place that is famous for breakfast and brunch. The menu has that upscale, eclectic aesthetic. You can get eggs and bacon or pumpkin spice pancakes, but also a vegan breakfast burrito, eggs Benedict, or bananas Foster French toast. The Benedict is offered with pork belly, beef short rib, fried chicken, or avocado instead of the traditional ham. The person taking our order recommended the fried chicken. Having tried it, I can see why. The crispy breaded chicken goes with the freshly made hollandaise sauce better than the salty ham or bacon would, and when placed atop a freshly baked English muffin it’s a decadent way to start the day. It comes with either breakfast potatoes or salad, and as long as I was blowing my diet I decided I might as well do it completely and get the potatoes. Their small potatoes with crisp herbed skin were accompanied by occasional roasted tomatoes. It was worth the splurge. 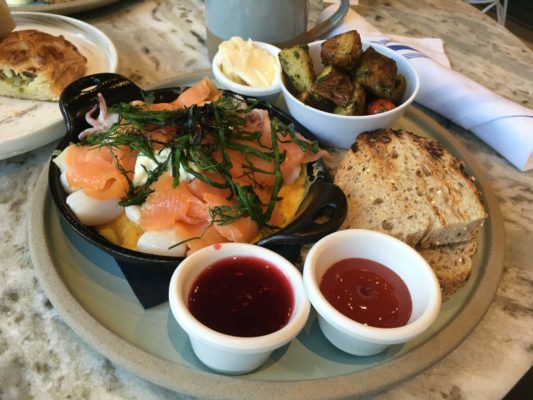 The seafood omelette at BBCM. Photo by Richard Foss

The other breakfast we tried was a skillet baked seafood omelette, which was successful though not what we expected. In the 19th century French omelettes were basically an egg pancake topped with the other ingredients, and that’s how they do them here rather than fold them over. This means the flavors don’t blend the way they do when everything is cooked together, so there is a greater variety in each bite. In this case the seafood was scallops, baby calamari, shrimp, and smoked salmon, with a bit of crème fraiche, salmon caviar, and fresh dill on top. The flavors are more natural and fresh and somehow lighter, and it was an excellent effect. This too came with a choice of potatoes or salad, along with toasted whole grain bread from their bakery.

Each would’ve been a satisfying breakfast by itself, but as I mentioned we really couldn’t pass that pastry case without trying something. In this case it was a croissant pastry stuffed with leeks and Parmesan cheese, which was fantastic.

We had managed to snag the last available indoor table at breakfast, but when we were there at dinner things were considerably quieter. This was midweek and well after the time that most office workers would have gone home. There was no line, but we still ended up getting something from the pastry case.

We started with a bowl of butternut squash soup and a smoked trout tartine. (For those who don’t remember what a tartine is, it’s the French word for an open faced sandwich.) In this case the whole-grain bread was topped with herbed mascarpone cheese, lightly pickled cucumbers, shaved onion and fennel salad, and trout with a dash of lemon oil and a sprinkling of fresh dill. Eating it neatly by hand is a balancing act, since the mascarpone at the bottom is too thinly spread to hold the rest of the ingredients down, but if it was spread thick that flavor would have dominated. The onion fennel salad and the lightly smoky fish both had fragrant sharp notes, and the proportions of each were just right. I was less thrilled with the soup, which had a little bit of balsamic vinegar and pumpkin seed oil on top. I thought both were unnecessary, adding fruitiness to something that already has plenty of sweetness by nature. My wife liked it that way, but it’s the only item of the meal that I wouldn’t order again.

We shared a salad that included fresh red and golden with goat cheese, baby chard leaves, tomato, shaved onion, and a delicate sherry vinegar. Some beet chips on the side of the plate added color and flavor. The menu description didn’t include the tomato or greens and said that there was pine nut brittle as well, but I suspect that they changed their recipe but didn’t update the menu. I might like to try the version that they described, but was perfectly happy with this one.

One thing I should mention before I go any further is that when you are ordering here, you must tell them you want the appetizers to arrive before your main course, or you will have an avalanche of food arriving on your table at the same time. If the restaurant is relatively quiet then you can order your starters and when they arrive go back and order your mains – service here is quick so you will not wait too long. 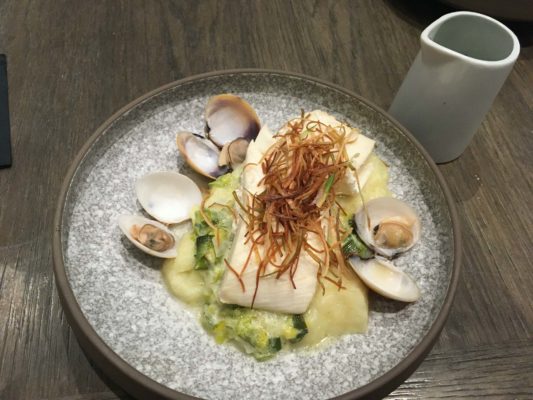 The halibut in white wine nage was a favorite. Photo by Richard Foss

Since we ordered three starters and wanted to have room for dessert, we split one main course, a halibut with white wine nage sauce (and in case you were going to ask what nage means, it’s white wine whisked into butter used to poach seafood, and it’s as rich as it sounds). The fish was served over mashed potatoes with stewed leeks and a few manila clams on the side and some crisped leeks atop it all. Many chefs like to grill halibut in order to take advantage of the crispness and slight sweetness that this fish has when prepared that way, but this method presents the fish in a completely different manner. It’s a more delicate way of treating this seafood, and as much as I like the grilled version I was impressed.

BBCM has a decent wine and beer list along with soft drinks, milkshakes, and the coffees that you might expect from their name. The wines are fairly priced and generously poured. My wife tried a Humboldt cider that she enjoyed very much. The one mysterious deficiency among their drinks was the quality of their drip coffee, which we found somewhat bitter in both the light and dark roasts. The espresso was better, and if you are a caffeine hound I would recommend that.. We didn’t get the house special, a dazzlingly pretty decorated drink called a color burst latte, because its main attraction is its appearance and we really only cared about the flavor. People around us were ordering these and in every case taking a picture of them to show their friends. If  you’re part of the Instagram crowd you’ll probably do the same.

On the other hand, if I were taking pictures, it would have been the berry tart that had been decorated with flecks of real gold, because it was gorgeous. I prefer a crisper biscuit crust than the one here, but that’s a minor quibble.

The prices reflect the location, with breakfast running about $20 per person and dinner for two with wine about $45 per person. BBCM provides value based on the high-quality ingredients, fast and friendly service, and the fact that they’re memorably good at almost everything they do.