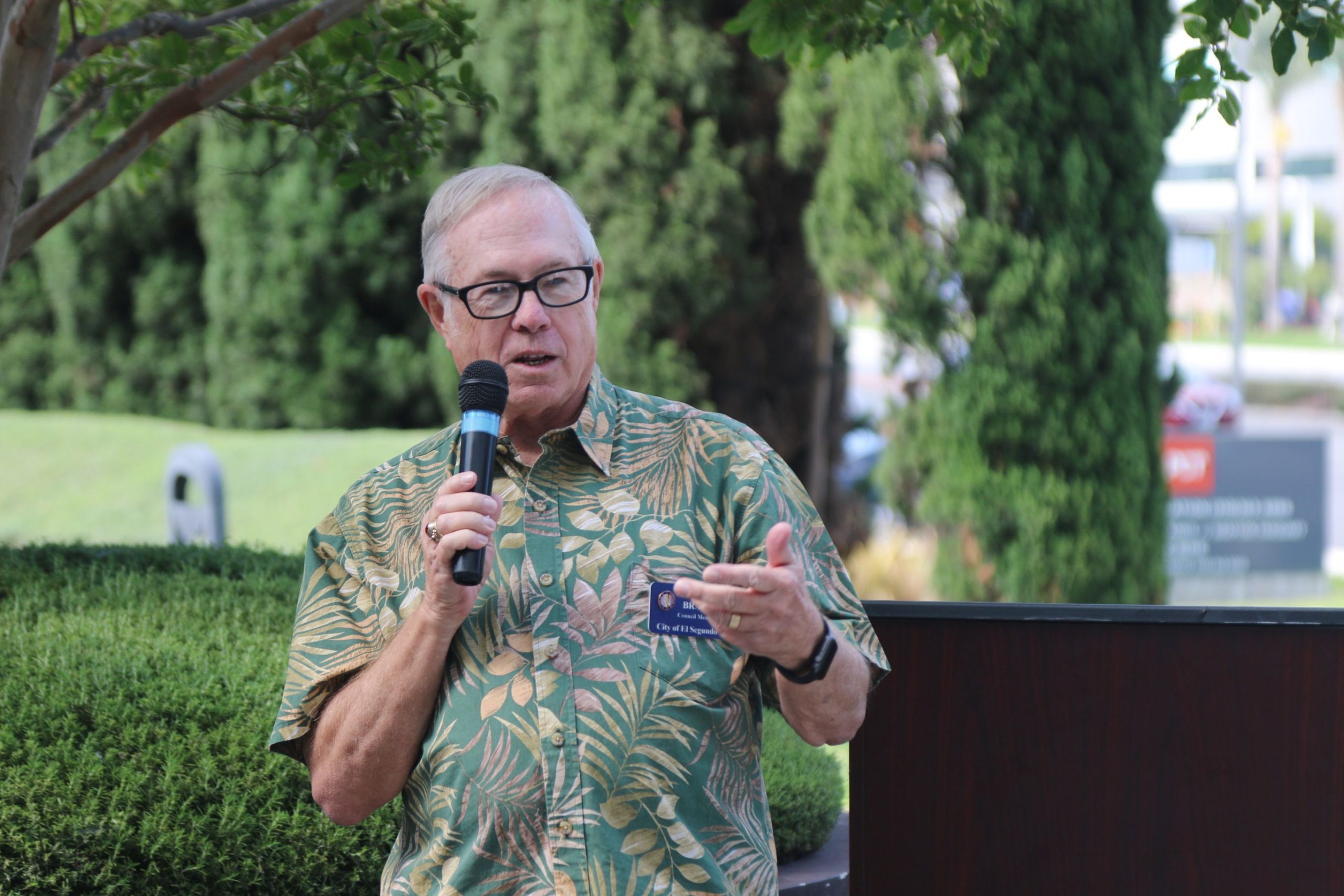 For the first time that Councilman Don Brann could remember in 40 years of the El Segundo Holiday Parade, clouds opened up over the stream of cars carrying dignitaries, and entertainers marching down El Segundo’s Main Street.

And the city’s first rainy-day parade — even if the rain was more a block-by-block splash than a deluge — just so happened to take place on what will likely be the last parade of Brann’s second, and likely final, term on El Segundo’s City Council.

“I don’t think I’ll come back for another turn,” Brann said. At 74, he’s the oldest person to have served on El Segundo’s council. Brann is stepping away, in part, because of a personal promise — he decided long ago that he would not run for a second term in elected office, preferring to get in, get his work done, and get out.

But he’s leaving early, in January, owing to a California state law that is soon to take effect. Senate Bill 126, signed by Governor Gavin Newsom, is billed as a charter school transparency law that places charters under the same laws that govern public school districts. What affects Brann is a clause restricting elected officials from making decisions that could personally benefit them. Brann founded the El Segundo-based Da Vinci Charter Schools in 2008, and today serves as its board president. 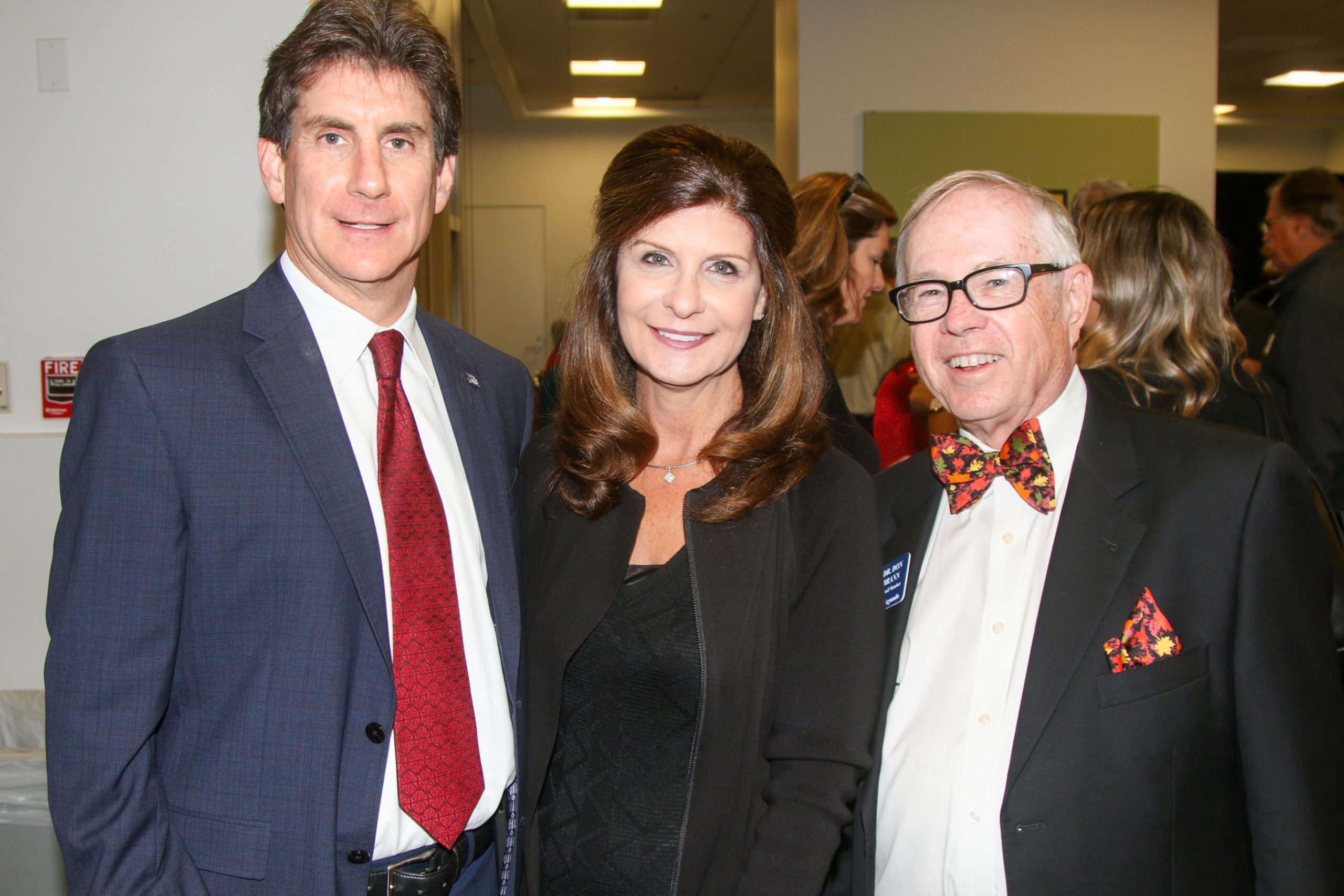 “The way the law is written, if there’s a remote chance that Da Vinci could enter into a contract to lease or rent space from the city, that would be a problem, and I couldn’t cure it just by recusing myself,” Brann said. So, he’s leaving three months earlier than he otherwise would have.

That’s fine with him: he’s more than happy to discuss the STEM-focused Da Vinci schools at any opportunity, and education is his first love. Brann’s career path was set in motion nearly 50 years ago, when he began teaching fourth grade at El Segundo’s Center Street School.

By 1984, Brann was the Superintendent of Lancaster’s Wilsona School District — and very likely, the youngest superintendent in California history.

His career as a school administrator took him across the state. In 1984, he became head of Old Adobe Union School District, in Petaluma; in 1992, he spent a year leading Placerville’s Mother Lode Union School District. Ii 1993, he returned to the South Bay as Superintendent of Wiseburn School District, a position he held until 2008 when he began the first of what would become a series of short retirements. (His resume indicates four more professional stops in education, Da Vinci aside, since 2008.)

So, why would a longtime top administrator decide to move out of being the boss, and becoming part of El Segundo’s elected decision-making body?

“It’s important to me to have meaning in my life — I have the hope that I can make a difference in the world, make it a better place,” Brann said. He had a feeling that a lengthy retirement of “just going to the beach and reading books” would not be as interesting as finding other ways to use his talents.

He took third place in 2008’s El Segundo City Council election, winning one of the three available positions in the city’s at-large election.

“Of course, I’m really a leader — and I’m much better as a leader than one of the electeds,” Brann said in reflection. Being one of a group of leaders, not the executive working with a group of electeds, didn’t sit especially well with him. So he left the Council in 2012 to become interim Superintendent of San Gabriel Unified, and after that a State Trustee of Inglewood Unified until 2015. (In that case, he benefited from a law designed for him, in which he could keep his 30-years-pension while still serving as a state-appointed trustee for Inglewood, which was then in receivership.)

In 2016, Brann got the political bug again, running to “Keep El Segundo Strong,” as his campaign slogan urged. His goal, he said, was to fix the quality of life issues that he felt were plaguing the city: Public safety problems, traffic and parking issues and sinking employee morale.

The El Segundo Police Department was of particular import to Brann. The number of sworn officers had dipped into the low 50s from a budgeted maximum of 62 positions, and crime figures in El Segundo were on the rise.

The City fixed the first problem by investing money: El Segundo began offering a $25,000 bonus for police officers who made a lateral move, transferring departments to El Segundo. The department has also made an effort toward its operational investments: at the City’s holiday parade, a selection of officers could be seen at Main Street and Grand Avenue, clad in olive drab, with bullet-resistant armor. “Showing everyone what taxes are paying for,” Brann said.

The second problem is harder to fix by throwing money at it. El Segundo is tucked into a geographic enclave, bordered by the Pacific Ocean at its west, LAX and Chevron at its north and south. Still, serious crime increased by 8 percent from 2017 to 2018, with increases in property crime. Less serious crimes, DUI and vandalism, also increased from the previous year.

The city’s roots still lay in its history as a corporate town, It was essentially founded by Chevron and today is the home of multiple Fortune 500 companies, including Mattel, which sponsored this year’s Holiday Parade. By many accounts, the city is thriving, and he’s proud to see the state El Segundo is currently in. Its best days, Brann said, lay in front of it.

But what Brann sees in today’s El Segundo is a city at risk of losing its soul and its status as “Mayberry by the Sea.”

“The change in residential prices has brought people who can spend well over a million dollars, into two million dollars now; we’re costing our city its sense of community,” Brann said. While new homeowners work hard to pay their mortgages, he’s part of the Old Guard struggling to keep the Neighborhood Watch call sheet up to date.

Housing, as it is for so many California cities, may be the biggest worry El Segundo faces. For now, the city has maintained its freeze on housing development east of Pacific Coast Highway, forcing any new development (including accessory dwelling units) to be squeezed into the increasingly crowded “Mayberry del Mar.”

“That might have made sense 100 years ago, or 75 years ago. Does it make sense in 2020 and going forward? I don’t think so, and I think if you don’t get out in front of it, the state will come in, and they’ll tell you what you’re going to do,” Brann said.

Take, for instance, El Segundo’s reactive measure against the rash of eviction notices handed out in advance of AB 1482, the state-wide rent control bill that takes effect in January. El Segundo joined many communities, including the neighboring Beach Cities and Torrance, in taking action with a stop-gap measure to protect renters who had been handed notices of eviction or spikes in rental rates. Brann was the lone dissenter on the 4-1 vote.

“I’m not sure we did anything that helps anyone,” Brann said, feeling the measure was “too little, too late” for those who had been served with notices, and that it did nothing to support property owners who were about to face limits on their rental income.

That’s far from the only vote that Brann was the lone dissenter on, which he feels comes from his place as the last member of his generation to hold a Council seat. Some of his colleagues, he observed, are younger than his own children. And their values are different. He admits to holding more conservative beliefs than the rest of the Council.

“Without me going forward, they’ll get a lot of 5-0 votes…but for the first time in decades, there’s not someone on the council who represents the people who built this town, the ‘Old Guard,’” Brann said. “The people who put me in don’t necessarily have smartphones,” or spend their time on Nextdoor or Facebook, airing their grievances. “But they’ll vote on Christmas in the snow because they appreciate that freedom.”

Life will go on for El Segundo and for Don Brann, who said it’s easy for him to choose Da Vinci over city politics, Education is his professional passion.

“But maybe I’ll try to break my own record,” he joked.

Don’t bet on that though; the odds are worse than rain on parade day.