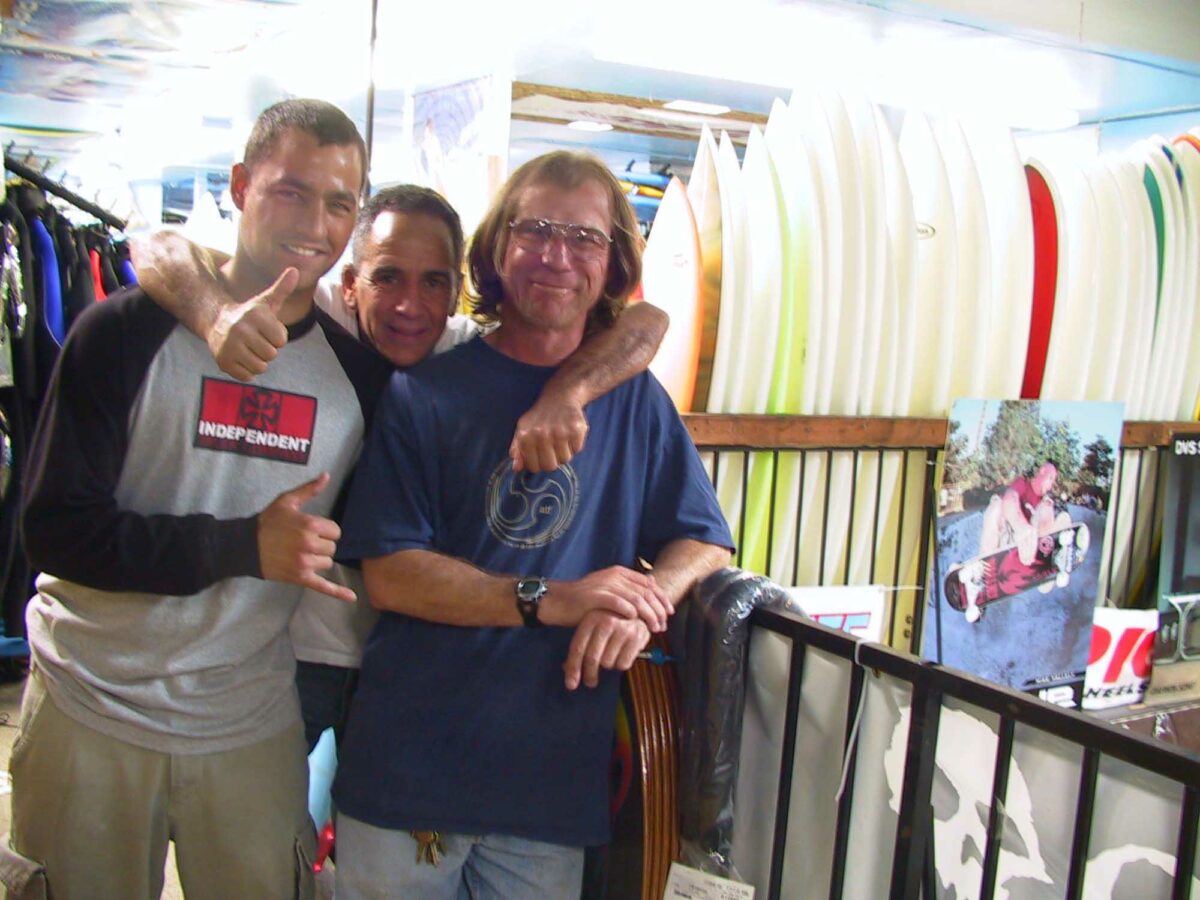 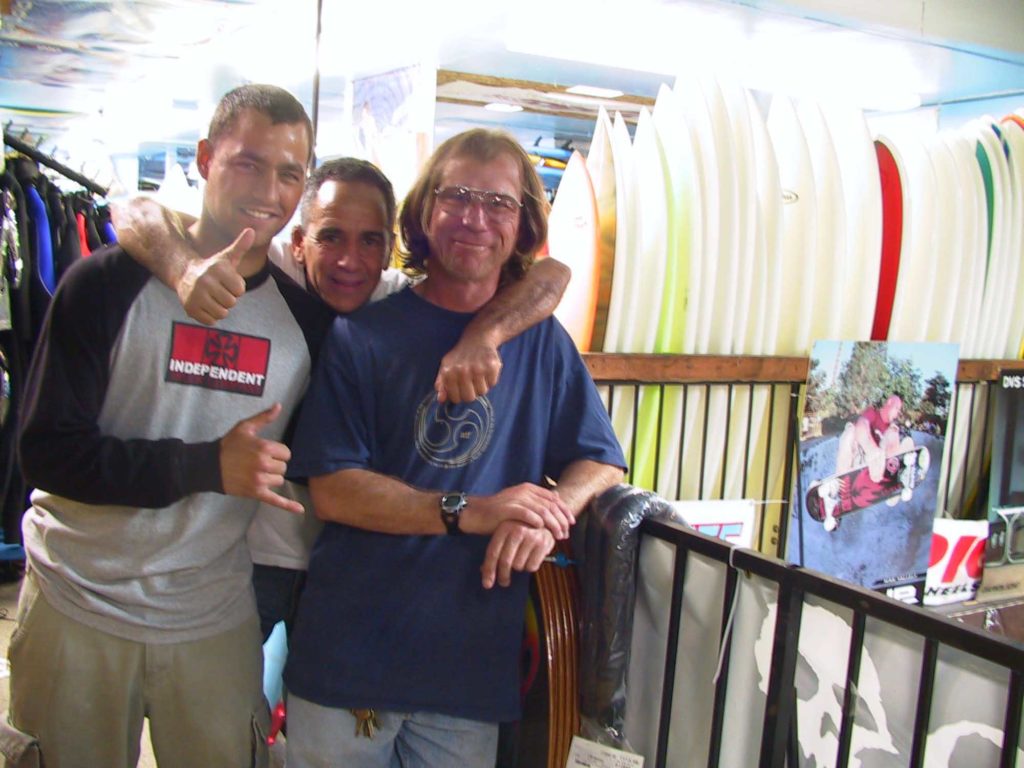 Eddie Talbot is celebrating the 45th anniversary of ET Surfboards and Surf Shop, arguably the most successful surf shop in the South Bay since the late 1960s.

In the mid-Sixties, Eddie and his best friend, Pat “Gumby” Ryan, were groms on the Greg Noll Surf Team. Even then, Eddie had a pretty good crew around him, including Mike DeNoune, Ronnie Williamson, Teresa Gamboa, Kevin Anderson, Dennis Jarvis and Ed Sakel. Nobody could resist Eddie’s home-spun personality. He looked like one of the Mario Brothers. I think he was born with that bushy black mustache. He and Ryan. They were joined at the hip, like Gumby and Poky, almost living out of Eddie’s ‘63 black Dodge Dart with a coat hanger sticking out of the hood for a radio antenna.

Eddie and Pat were good surfers who could have broken into the top10 on the Western Surfing Association Contest Circuit. But they got caught up in the surfing production end.

Eddie was managing Greg Noll’s shop during his final years before Noll filed for bankruptcy. Pat started making boards for Eddie and the team. They were raw, looking like something out of the backyard, but Eddie and the team surfed well on them. Eddie loved working for Noll and his whole big-wave, bigger-than-life surfing persona, even though the end of Greg Noll Surfboards was coming soon. Eddie told Greg just to pay him what he could afford and Greg could pay him the difference when business picked up.

In 1969 short boards were in and long boards were out. Surfers were tired of paying $120 for a new board when they could buy a blank for $15, shape and glass it themselves. All the surf shops were in trouble. Bing and Rick sold out and moved to the mountains. Hap Jacobs sold out, bought the Redondo King Harbor Gas Dock and took up commercial fishing. Greg tried to hang on by extending his dealers too much credit for big orders. The banks and the IRS were about to put the locks on Greg’s shop and factory.

The night before everything in Greg’s factory was to be locked up, Greg told Eddie he didn’t have any money to pay him. Greg told Eddie to rent the biggest truck he could find, drive down to the factory and load it up with blanks, fiberglass and as much resin he could carry. In the middle of the night, Eddie and Pat not only filled up a big U-Haul Truck but also they’re tiny, two bedrooms, North Redondo apartment with surfboard building materials. Backyard board builders would tap on his bedroom window in the middle of the night with empty milk containers for Eddie to fill with resin.

Eddie said, “I couldn’t sell the stuff in the daytime because I didn’t have a business license and I had huge drums of hazardous materials. If someone would have walked in my apartment smoking a cigarette half the block would have blown up. I used to sell the materials between midnight and daybreak.”

The big surfboard manufacturers were starting to panic as the backyard board movement was gaining momentum. New surfboard sales were half what they were the previous year. Grant Reynolds glassed surfboards for the Santa Monica, South Bay, and Huntington Beach surf shops and was part owner of Jacobs Surfboards. He got together with Larry Gordon of San Diego-based Gordon and Smith Surfboards and together they formed a surf shop union to control the surfing industry. All the surf shops up and down the coast joined the union to try stopping the backyard board builders,

Grant went to “Grubby” Clark of Clark Foam and told him that if he continued to sell his foam blank second’s to the backyard builders, the union wouldn’t buy any more of his blanks. Grubby told him to go right ahead, and if he hassled him anymore he would sell the backyard builders all his first condition blanks and Grant and his friends could fight over the seconds. Grant was furious but there was nothing he could do because  Grubby had a monopoly on the surfboard blank industry. Grubby loved the backyard board builders because they paid full price for blemished blanks that the surfboard shops rejected.

Eddie saved enough money from his backyard surfboard building material business to rent the smallest shop on the north side of Aviation Boulevard, across the street from where his shop is now. The first ET Surf Shop had a tiny showroom — and that was it. The bathroom was an outhouse behind the shop. Eddie said, “It was so small that Dive N’ Surf gave them some wetsuits on consignment that they had been unable to sell. If somebody wanted to try one on, they had to go to the outhouse behind the shop to do so.” Eddie’s tiny little shop was doing well when every other surf shop was going under because Eddie continued to sell board building materials to all his friends who helped him get started.

Eddie’s own ET Surfboards were starting to look showroom quality, with Pat Ryan getting more shaping practice and Ed Sakel becoming the good surfboard glasser he is. Williamson, Jarvis, Terry Stevens, Mike DeNoune, and Anderson were getting a quite a following. Gamboa was the perfect sales manager. Eddie brought in a silent partner so he could move across the street into a bigger building. It’s where he is today but it was a third the size. Eddie couldn’t afford the rent on his new shop and his apartment so he slept in the back of ET Surf Shop.

When Eddie moved across the street and expanded his shop, Grant Reynolds stormed in the front door, demanding Eddie stop selling materials to the backyard surfboard builders — or else he was going to do something drastic. Eddie threw Grant out of his shop. Late that night somebody threw a lit bottle of gasoline at the front door of ET Surf Shop. Eddie said, “If I wouldn’t have been living in the back of the shop I couldn’t have put out the fire with my only extinguisher before it burned down my new shop. I never saw who threw the lit bottle of gasoline at the front door. I wasn’t supposed to be living at the shop so I never reported it to the police.”

Eddie used the shop’s profits to go into the skateboard business with Kevin Anderson. The urethane Cadillac Wheels, invented by Frank Nasworthy, revolutionized skateboarding much like surfing’s short board. Kevin was the king of skateboarding pools, parks, and giant half pipes,.His picture appeared on the covers of every skateboard magazine. Kevin set up a skateboard shop in the back of ET Surf Shop, where he built and repaired skateboards.

Eddie was always at the shop, working behind the counter, giving deals to everyone in the South Bay. He told customers if they could find it for less anywhere he would beat it. In the Sixties, surf shops sold surfboards, T-shirts, trunks, short john wetsuits, and Surfer Magazine. That was it. In the early Seventies, ET Surfboards became the first surf shop to carry clothing linked with surfing and skateboarding. Eddie has always had the best employees (a lot of them world famous) because Eddie has always been the friendliest, nicest, most honest surfer in the surfboard business.