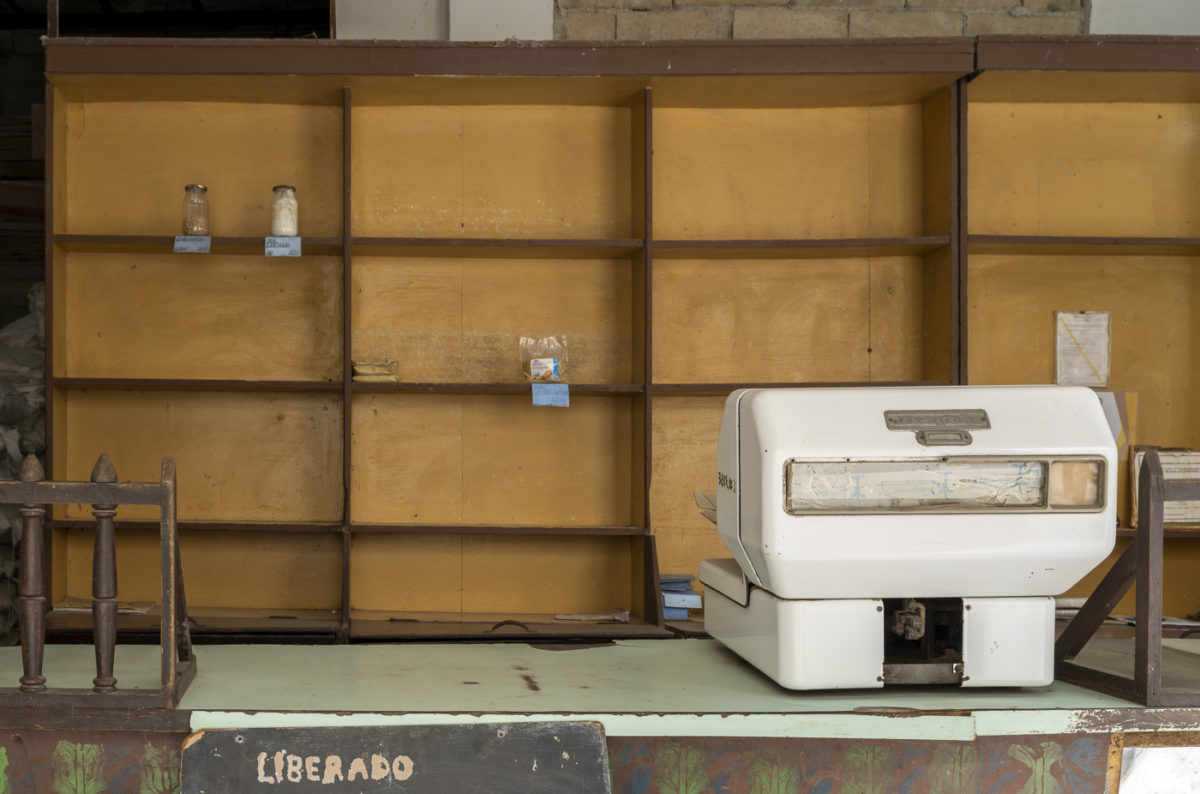 In Cuba. Photo by Matt Welch of Pacific Coast Gallery from the series “The Still Life”

Behind the closures, they’re keeping busy

An update on galleries in the South Bay

Although the major museums are closed for an indefinite period of time, and art galleries as well, a few of the latter, because of their small size, are still allowing in the occasional visitor, although pretty much by appointment only. Here’s a look at the current state of things: what you may be able to see, could have seen, might have seen, and won’t see.

Over this past weekend, Monica Welch of Pacific Coast Gallery in Manhattan Beach emailed to say that, “Like many businesses, as of Monday we are now open by appointment only.”

Her husband, Matt, with whom Monica owns and co-runs the gallery, returned recently from three weeks in Cuba. He’s using this downtime to edit the thousands of images that he took, part of which, a series on everyday life in Havana, is to be called “The Still Life,” and it features “interior shots of state-run ration bodegas, which, even when fully stocked, resemble the picked-over grocery stores in the South Bay.” 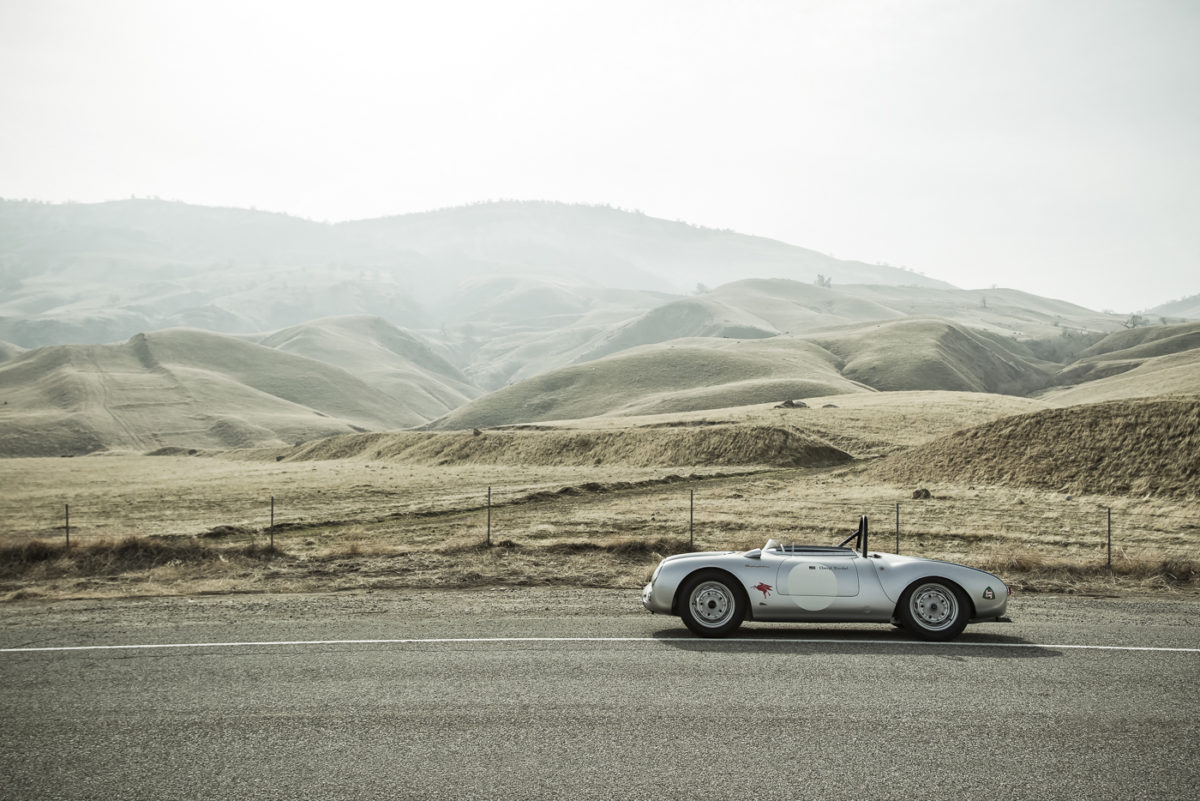 Pacific Coast Gallery is working with commercial and automobile photographer Marc Urbano. His work will soon be seen on the gallery’s website

Monica adds that, after returning, Matt told her that he “felt strangely right at home in the picked-over Trader Joe’s aisles right now. The U.S. in a state of hoarding is still miles ahead of life in everyday Cuba.”

Matt and Monica are keeping occupied in other ways as well: “We’re using the time to curate new vintage images we will soon be releasing by SPOT,” Monica says, referring to the photographer whose work they featured in the solo exhibition “Ride the Wild Wheels.” They’re also working with commercial and editorial auto photographer Marc Urbano. “We will be launching his new fine art photo line of classic Porsches and other cars in the coming weeks when the new website launches.” 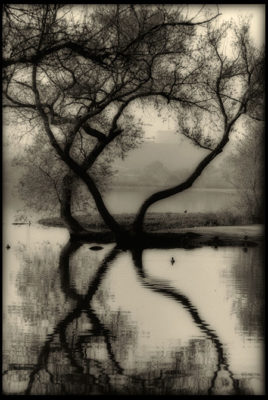 “What is it About Trees?” is a group show still hanging in the El Camino College Art Gallery. Photo by Ray Carofano

When the website goes up (“featuring our new artists and e-commerce so people can order online more easily”) Monica and Matt will let us know.

Other services remain available, renderings for example, in which collectors can take snapshots of their wall, “email it to us,” says Monica, “and we render different photos in different sizes for them.” Also, “We do our own custom large format fine art printing in-house, and are well stocked with fine art paper, so we’re able to keep up with printing needs right now.” Well, that should be enough to get you started.

David Wolfram at Destination: Art in Torrance recently posted these words: “Hopefully, art will go on, even in this ‘unprecedented’ time! To that end, we are introducing ‘Art in Isolation’ – Please send jpegs of the art you are creating during this pandemic to LocalArtists@destination-art.net and we will post them on an online Gallery on our website destination-art.net.”

We’ve been in touch with curator Susanna Meiers at the El Camino College Art Gallery. On a personal note, she writes, “This afternoon, finally, I have begun to paint. Not sure where that is headed but at the moment it is simply a relief to do something expressive rather than gorging on the news.”

The current show in the gallery, “What Is It About Trees?” remains intact and at this time will reopen when the school reopens. “At this moment we don’t know if we will be opening the Art Department Student Show at the end of the semester (in May) as the art students are now attempting to do their work online.” 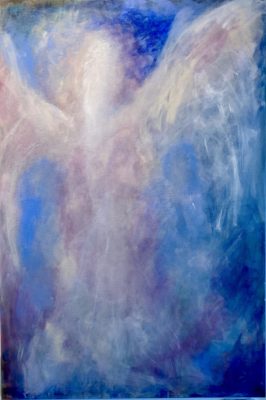 “Spirit of Light,” by Judy Lange, is at Artlife Gallery in El Segundo

“Laura Stickney/Take a Closer Look” was originally scheduled for this month and next but is postponed until October. “Stellar,” scheduled for November and December, features work by six artists, recently graduated from El Camino College, “who have gone on to do higher degrees in art or are doing their own artwork out in the world,” Meiers says. “Their current work will be accompanied by a few of their ECC art instructors whom these stellar former students regard as important influences.” The artists: Zane Dowd, Roger Fuentes, Lanise Howard, Zack Miller, Valentina Moeur, and Tony Nguyen. The instructors: Randall Bloomberg, Willie Brownlee, Pam Huth, Russ McMillin, Irene Mori, and Vince Palacios.

We’ll have updates on these exhibitions as we move into late spring and summer. 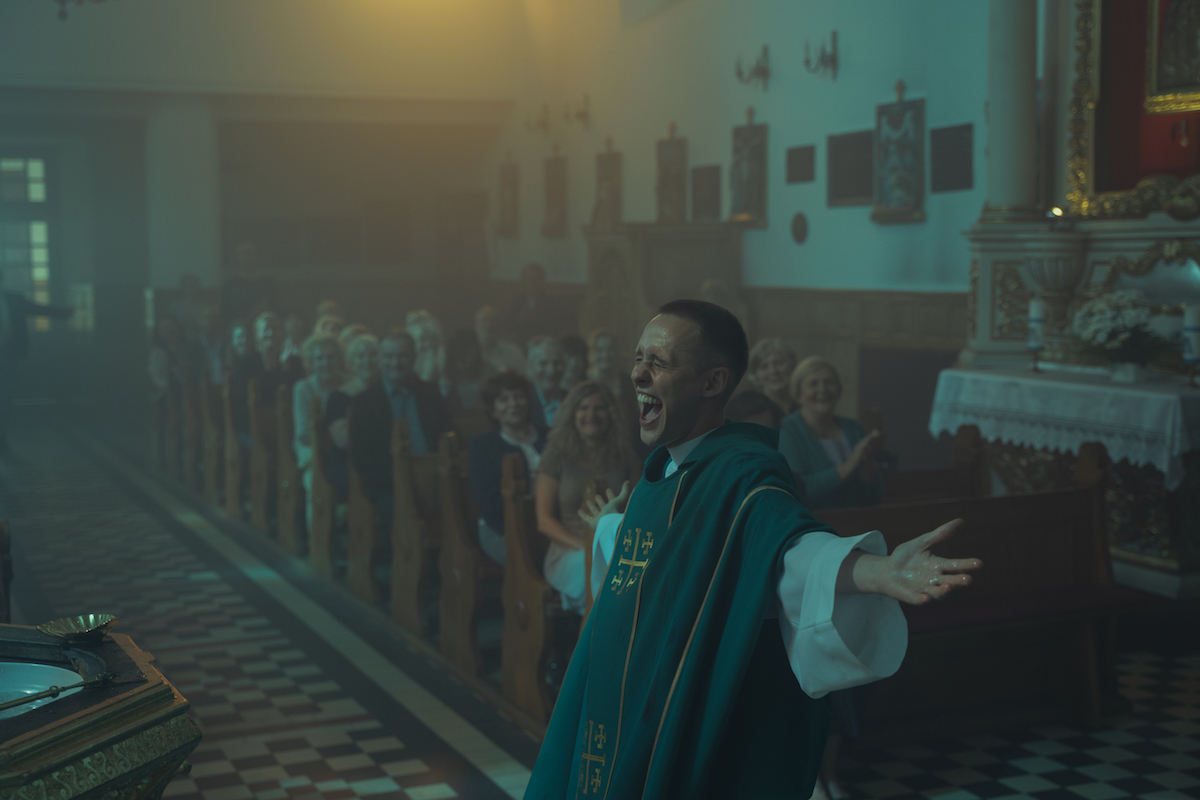 A still from “Corpus Christi,” now available for screening through the South Bay Film Society

Although the above films were screened for South Bay Film Society audiences, all are fairly new, some had just opened, and some were scheduled to open across Los Angeles.

Berler emphasizes that the film links will work through Vimeo streaming on your computer, but that we’ll want to watch them on our large screen television. For those needing information on how to set this up, and to learn more about the upcoming films, go to southbayfilmsociety.com. 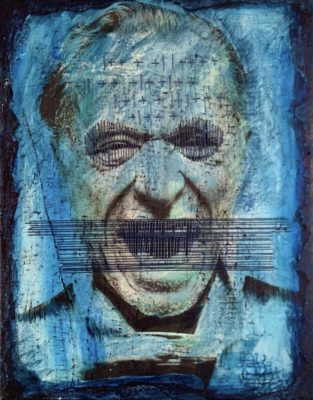 As mentioned last week, work by Sarah Svetlana and Irina Vladi are still hanging at ShockBoxx Gallery in Hermosa Beach. Curator Mike Collins says that he intends to broadcast virtual artist talks next weekend via ZOOM. Details about these talks are to be announced on the gallery’s website, which is shockboxxproject.com.

Also, an offer has been extended to artists who’ve previously shown at ShockBoxx to provide the gallery with additional works that can be uploaded to the gallery’s presence on Artsy. They can do this by going to artsy.net/shockboxx-1.

The next show that ShockBoxx has lined up is “Go! Figure” and it’s scheduled for April 4. “It will be promoted on Artsy,” Collins says, “and all of our digital platforms. We’ve been contacted by a company that might be able to help us offer actual 3D tours of the gallery for all of our new shows.”

Currently, ShockBoxx has active art calls for “Not an Art Fair” (originally scheduled to open in May) and “Don’t Touch Your Face,” the latter show “created in response to the need for social distancing and ultimately quarantine … This call is one that I hope will give artists something to do, and also allow us to capture this experience through a wide variety of perspectives, mediums and locations.” 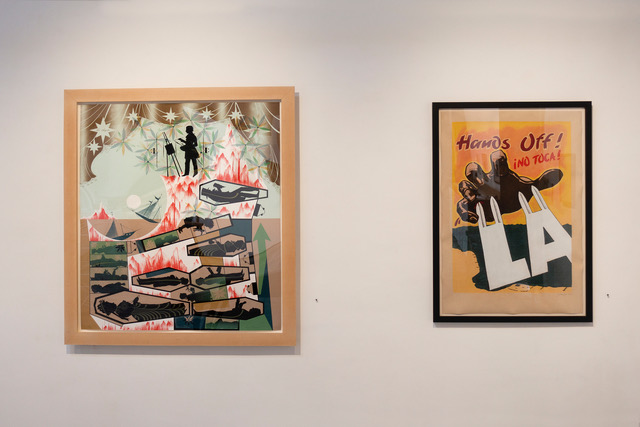 One gallery I’ll miss going to, for the art but also for the intellectual companionship, is Gallery 478 in San Pedro. “Artists as Collectors,” curated by Ron Linden, is the most recent exhibition. Arnee Carofano, who runs the venue with her husband Ray, comments that “Gallery 478 has become a lonely place, and although we’d like to share the work on our walls with the public, circumstances prevent us from doing so.

“Most of the galleries in San Pedro are artist-run, so no one is idle; on the contrary, they’re likely producing their own work. We look forward to a return to normalcy and have planned an exhibition by the French photographer, Lionel Antoni.” 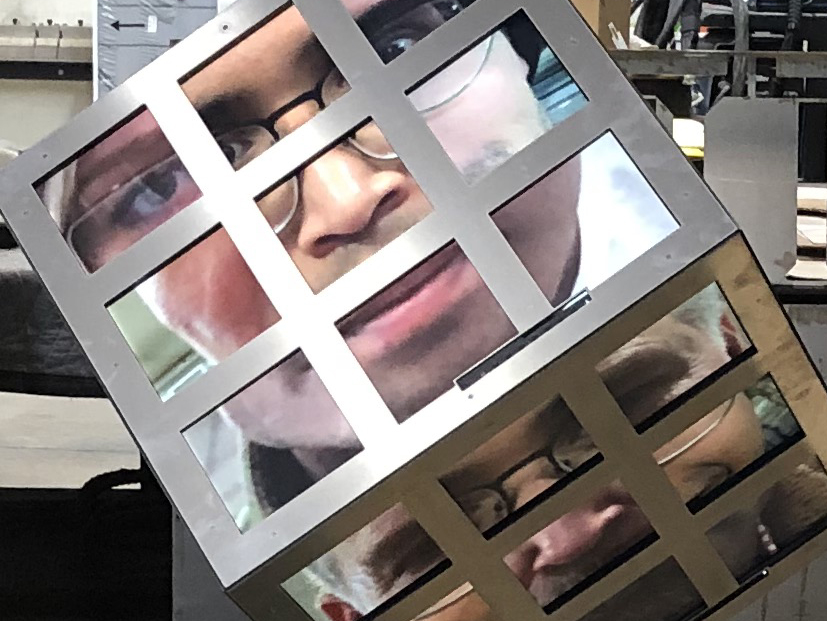 “OOMO,” a solo show devoted to photographic artist Nicole Maloney will be available for live streaming after it goes up in April at ESMoA. Through May

Although ESMoA in El Segundo is not open to the public, the public is invited to submit photos, paintings, sketches, and even short movie clips to submit@artlab21.org.

Be sure to attach the submission form as well, available from the ESMoA website, esmoa.org. 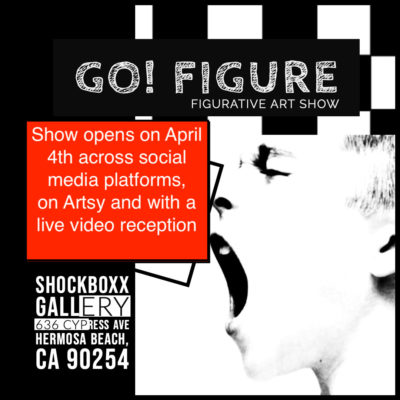 Coming in April will be “OOMO,” the first solo show devoted to photographic artist Nicole Maloney. According to ESMoA’s press release, “OOMO embraces the oneness of humanity through interactive art: the OOMO digital cube. OOMO asks the world to stand in awe instead of in judgment of one another. The cube is a conceptual interactive art sculpture made of steel and aluminum + LCD monitors.”

After it’s installed in the gallery it will be visible for live streaming. Through the end of May. Check back with ESMoA for launching updates.

I’d like to end this week with a few words from ShockBoxx owner Mike Collins:

“Artists tell stories and capture moments. As one, and as a psychologist, I think it is important to have as many opportunities as possible to speak and make meaning. This is interesting and going to get so much more so: I can already see some of my friends’ and colleagues’ work taking on a different tone during these early stages of quarantine and the pandemic. I hope we are all staying safe and healthy, but the artist in me is excited to see the work that comes out of this experience. It makes me think of how the New York School got started in times of great struggle and how many mediums and an actual lack of supplies drove much of that movement. It’s here for us now. Let’s see how we respond.” ER