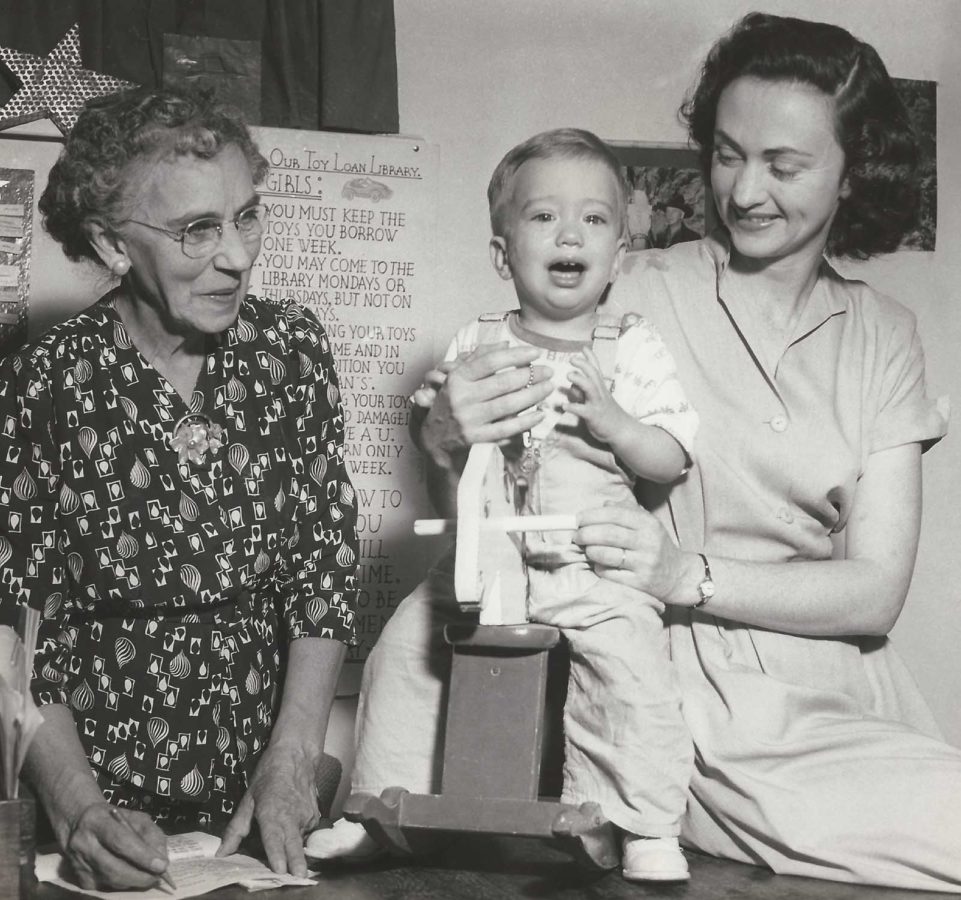 A child sits on a rocking horse found in the “toy library” created by the Sandpipers in the early 1950s. This and other photos will be on display at an exhibit on the philanthropic organization opening this Friday at the Hermosa Museum. Photo courtesy Hermosa Museum

A cord of wood, a few bottles of milk, and a visit to the doctor: each forms part of an entry in a “neighborhood philanthropy” casework log from the 1930s of the Sandpipers, the charitable organization founded in Hermosa Beach. The casebook, with its prices scrupulously recorded and ready to dazzle inflation-adjusted eyes, is one of dozens of items that will be on view starting this Friday night at the Hermosa Museum when the Hermosa Beach Historical Society debuts its latest exhibit, “Sandpipers: Philanthropy through the Decades.”

Museum curator Bradley Peacock said that, along with documenting the specific history of an organization that began in Hermosa, the exhibit has revealed new things about the broader history of the town. Gesturing at a black and white photo of a Sandpipers’ board meeting held inside the former Biltmore Hotel, he said, “It’s one of the best pictures I’ve seen of the Biltmore’s ballroom, and it’s in their archives.”

The Sandpipers formed in 1931 when seven Hermosa Beach women got together and decided to do something to help their neighbors affected by the Great Depression. They named themselves, as exhibit reveals, after the sandpiper, the “busiest bird on the beach.” Today, the Sandpipers remain an organization composed entirely of volunteering women, focused on meeting the needs of the South Bay community through philanthropy initiatives, including their famed Holiday Baskets and college scholarships. But, as the exhibit reveals, that steadiness of purpose has left room for some change along the way.

Rose Ahrens, co-president of the Sandpipers, said that the Sandpipers have “evolved as the South Bay has evolved.” She pointed to the way that the group’s meetings, which were once only in the mornings, are now always held in the evenings, to accommodate the fact that the majority of women in the club now work.

“That’s one of the things that has led to our longevity: to flourish, you need to grow. We have to be open to needs of our membership and also needs of our community,” Ahrens said.

Ahrens, who is now a vice principal at Manhattan Beach Middle School, moved to the South Bay with her family in 1988. Her mom joined the Sandpipers as a way to get to know people, and later became a board president, Ahrens said. Her sister joined in 2004, and she followed in 2009. This pattern of joining to make friends and linkages along family ties is common for people who stay in the area, Ahrens said. But giving back to community is what drives the commitment of its members.

“Within the organization, we recognize that the South Bay is a pretty privileged community.

People are grateful, and there is a real desire, a want to give back,” she said.

Putting on the exhibit was made easier by the fact that the Sandpipers maintain their own historical records. Ahrens said that the group began collecting materials about five years ago, in preparation for its centennial, and now has a group historian. As a result, the exhibit will feature well-preserved items through the decades, including funny photos of parties from the ‘40s and ‘50s, and copies of “Sandpiper Pipings,” a sort of group newsletter frequently written by Bunny Seawright.