Fast-food for grown-ups at Shake Shack 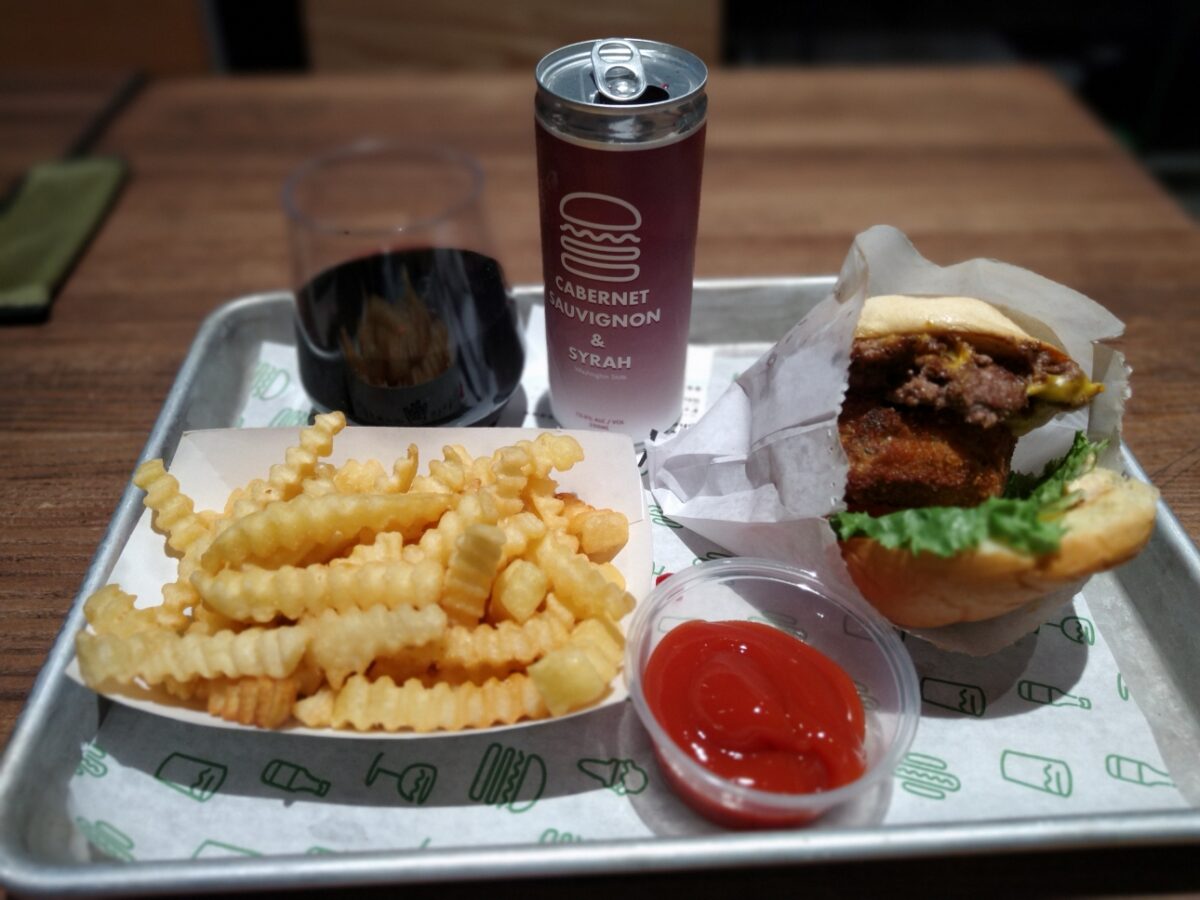 Shake Shack’s burger, fries and wine, all for $28. Photo by Richard Foss

Shake Shack’s prices are high for fast food. Are they worth it? You decide

I have occasionally poked fun at the cult status of In-N-Out and the mystery that a place that serves only rather small burgers can inspire such adoration. Viewing this in a historical context, it isn’t unusual. The tradition started with the world’s first burger chain, White Castle, which began selling strange little sliders in Kansas in 1921. They’re weird, greasy oniony morsels of meat encased in a lot of bread, but Midwesterners love them and buy them by the sack. Texans go nuts about Whataburger, Oregonians about Burgerville, and there’s probably some chain I’ve never heard of that’s the pride of Tennessee.

The burger transplant that earned the biggest notice when they opened in the South Bay was Shake Shack, which is one of the newest cult burger operations. They started as a hot dog cart in New York City in 2001, and now have over 200 locations in the US, and over 120 internationally. When the location on Rosecrans, in El Segundo debuted there were long lines to get in, which I assumed would abate when people got over the novelty. I stopped in back then and vaguely remembered that the burger was better than I expected, but not so good that I had to return any time soon.

That was 2017, and the lines are a bit shorter, but still there. I had assumed it was because they’d had the foresight to open serving fast food by a business park, but even on a Sunday evening, when all was dark in adjacent concrete and glass towers, the parking lot was full. This parking lot is far too small for the number of restaurants it is intended to serve, but Shake Shack still had a line. These patrons couldn’t all be New York burger snobs, could they? I decided to give the place a closer look.

One glance of the menu makes it clear that the strategy here is very different from the one at In and Out. That chain makes nothing but shakes, simple burgers, and fries. While Shake Shack sells those too, they also have chicken sandwiches, a vegetarian mushroom sandwich stuffed with cheese, and of course the hot dogs that were the foundation of their business. It appears that those dogs are now a minor percentage of their sales, at least at this location. I stood near the counter watching trays headed for tables, and saw very few hot dogs going by.

On that visit I was going to get a regular burger to try their most popular item again, but was distracted by their ‘shroom burger, a portobello mushroom stuffed with muenster and cheddar cheese, breaded, and deep fried. My decision of which to order was resolved in favor of the “Shack stack”, which puts the mushroom on top of a burger. I ordered that, a regular French fries, and a can of wine (more about that later), and was nonplussed by the bill for $27.89. The wine was ten and a half bucks, the burger eleven and a half, definitely on the high side for fast food. This had better be one fine burger, I thought as I headed to my table.

It was a very good one, small but tall. The meat patty is a blend of three cuts and has a relatively coarse grind, so it’s juicier and more flavorful than typical for fast food. It’s four ounces of beef, so you don’t get that mouthful of meat effect, but it is there in every bite. The mushroom is slightly more prominent as a flavor, the combination of muenster and cheddar so gooey and flavorful that I have to respect whoever came up with the idea. It worked in both texture and flavor, and it was actually worth the money.

The fries were crinkle cut, which often fries up crisper and gives more surface area to absorb ketchup. To make the inevitable comparison, In-N-Out’s are straight cut and skinny, made with fresh potatoes rather than frozen. Freezing removes some of the water from the potato, so Shake Shack’s are crisper while In-N-Out’s have more potato flavor. Both are salty, the better to sell beverages.

At that dinner the beverage was wine, just because I was curious about their house brand product. And okay, I’ll admit that it’s also because I like wine with burgers. Their red was a cabernet-syrah blend from Washington State served in a can that holds a third of a bottle, just more than a glass and a half using standard pours. It’s fruity and full bodied and not bad.

On a return visit I tried their buffalo chicken sandwich, a chocolate shake, and a frozen vanilla custard. Most chain buffalo chickens don’t have much spice going on, but this one did. It was only a three or so on the heat scale, but a flavorful three with some vinegar to balance the pepperiness, and that was accented by the pickle. The chicken was a thick disc like a hockey puck, rather than a thin one that dries when it fries, and though the portion looked small I didn’t feel hungry afterward. I could have easily managed an order of fries if I hadn’t gotten both the chocolate shake and dessert, but I wanted to experience those. Shake is in this business’ name, so I had to try one.

I’ll say this about the shakes: they’re creamy, rich, not overly-sweet, and don’t order one if you are also having the custard. It’s enough creamy richness not just for a meal, but for a day. I say that despite not knowing which I’d pick if forced to make the choice. The custard is like a really rich, very eggy ice cream, and I’d probably pick that because frozen custard is more of a rarity on the West Coast. Given our penchant for healthy dining, ice cream with added egg yolks may not be a big seller, but I do have to admit that it’s good.

The sandwich, shake, and dessert ran $21, again on the high side for fast food, but I didn’t mind paying it. Both meals were pretty darn good and arrived quickly, and if that’s the culinary niche you need filled, Shake Shack does it elegantly.