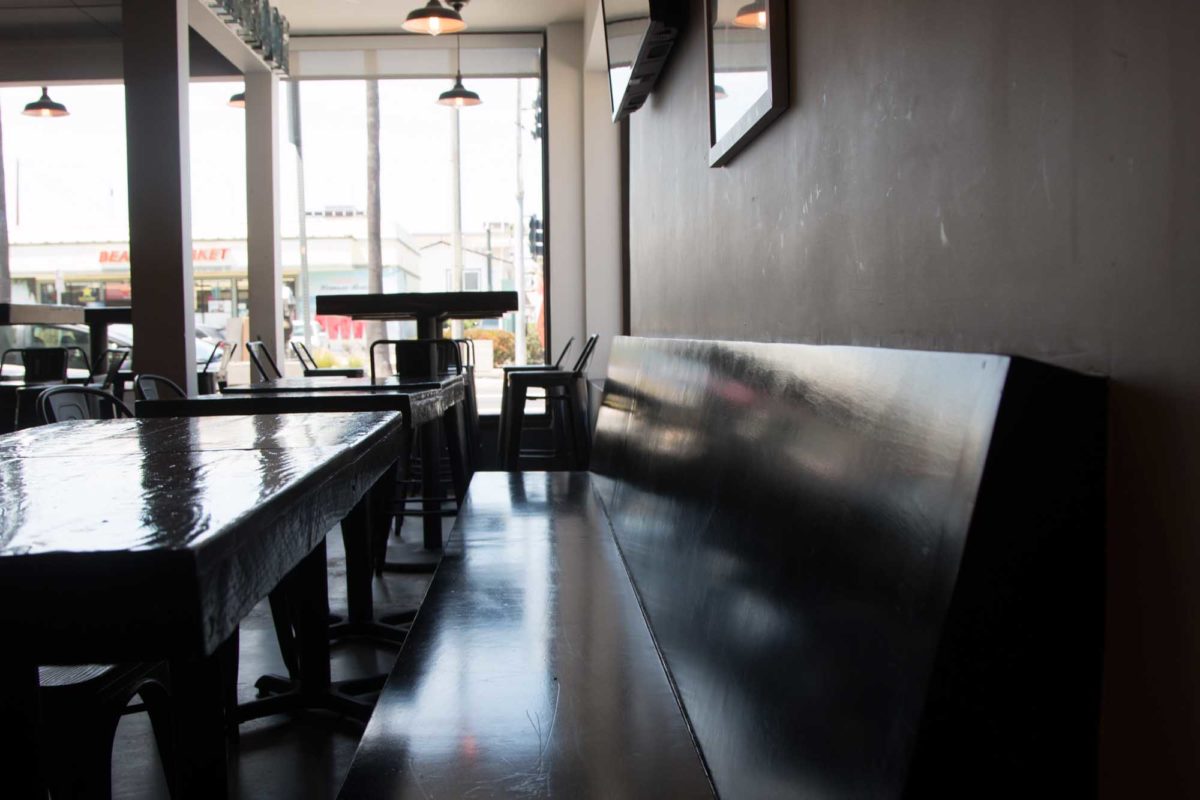 Hermosa Brewing took out a bench, like the one shown in the foreground, and replaced it with chairs just before opening. Photo by Ryan McDonald

Hermosa Beach Brewing Co. was excited to take advantage of a new city program intended to help restaurants, retailers and other businesses make it through the slow winter months. Three months later, the decision to apply has inadvertently exposed the downtown restaurant to thousands of dollars in potential fees.

Hermosa Brewing applied in January for a limited live entertainment permit, a new program launched in January following a vote by the City Council. In a statement following the program’s approval, the city described the program as a “business-friendly proposal” intended to allow businesses like the brewery to offer “low-key entertainment options” on weeknights, when foot traffic in Hermosa declines.

But when a city code enforcement official came out to inspect the restaurant, as is required to apply for the entertainment program, the official noticed a deviation in its permitted floor plan: the restaurant had replaced a bench running along the restaurant’s north wall with chairs. The city’s Community Development Department determined that this was potentially a “major” change requiring approval by the Planning Commission.

The costs associated with obtaining approval are considerable. Appearing before the commission to get a determination requires a non-refundable $1,500 fee. And, if the commission does determine that the switch from benches to chairs is a “major” change, Hermosa Brewing would have to pay upwards of $6,000 for a change to the property’s conditional use permit (CUP).

Use permits are given to locations, not occupants. According to the CUP for the business’ Hermosa Avenue address, “minor modifications to the floor plan shall be reviewed and may be approved by the Community Development Director,” but “substantial deviations” require Commission approval.

Dave Davis, a Hermosa resident and the restaurant’s co-owner, said that he was glad that the city had launched the limited live entertainment permit and was looking for ways to help businesses. But he has been frustrated by the process, and said that the prospective fees were especially challenging for a small operation like his.

“I don’t have an axe to grind with the city. I just want to be able to operate our business without onerous fees for something that most people would consider pretty minor,” he said.

Davis brought his concerns to the Planning Commission at last week’s meeting, but the commission could take no action because nothing had been agendized. Community Development Director Ken Robertson said that his decision was guided by how the commission had recently upbraided restaurants over unapproved floor plan changes.

“It’s a subtle difference, but I did not determine that what they were suggesting to do was ‘major.’ I just was not comfortable calling it ‘minor.’ So it’s somewhere in that zone between, I think,” Robertson said. “But based on your guidance in the past, it seems like a fair process is for them to apply for a Planning Commission interpretation, and then you could confirm whether or not it’s minor.”

In 2018, the commission twice forced restaurants to undo floor plan changes that had been made without prior approval. In June, the commission denied an application for a retroactive modification to the CUP for the storefront containing Serve on 2nd, a South Hermosa restaurant. And in January, the commission denied a retroactive floor plan modification from Patrick Molloy’s, which the Pier Plaza tavern had undergone without seeking permits during their participation in “Restaurant Renovation,” a reality TV program starring foul-mouthed British chef Gordon Ramsay.

“To be blunt, I don’t think this should go ‘in limbo’ for a few months, and they shouldn’t be rewarded. I think a message needs to be sent,” Commissioner Dave Pedersen said during the Patrick Molloy’s hearing.

Hermosa Brewing also made changes without seeking city approval. The changes there, however, are less extensive than the other examples. Serve on 2nd had expanded counter and floor seating beyond what the commission had approved, and had replaced sliding doors with roll-up style garage doors; Patrick Molloy’s had removed a “half-wall” separating the bar and dining areas, and relocated the restaurant’s DJ booth.

At Hermosa Brewing, the bench the restaurant replaced was part of the floor plan associated with the CUP obtained by Brat & Brau, the space’s previous occupant. The bench ran along the north wall from the restaurant’s western edge. Before Hermosa Brewing opened early last year, the owners removed a portion of it, and added high-top tables.

“It gave us more flexibility, although it actually reduced seating capacity,” Davis said. He estimates that as many as 10 people could have fit in the segment of bench that was removed, but the space now holds just four seats.

Larry Peha, a resident and architect who has often appeared before the city’s Planning Commission, is helping Davis through the process. He said that overly strict enforcement could discourage businesses from applying for the entertainment permit.

“For this establishment to take a bench, remove it, put four chairs — note that the occupancy load has not been increased by one person, we’re going from a bench to chairs — if that’s the intention, you go into any establishment in this city, you’re going to have everybody coming before you, there’s going to be problems,” Peha told commissioners.

For now, Davis is mulling his options. Even though his permit was rejected, he has been having occasional limited live entertainment, including trivia on Wednesdays. The emcee uses a microphone to pipe questions through the restaurant’s speakers. It’s already made a difference in the business, Davis said, but he told the trivia host that, because of the uncertainty over the floor plan, the business may need to cancel at a week’s notice.

“It’s a full house on a Wednesday night. That’s huge for a small business. And in the off-season, downtown Hermosa is not exactly bustling,” Davis said.