“The Fencer” – Stays there too long [MOVIE REVIEW] 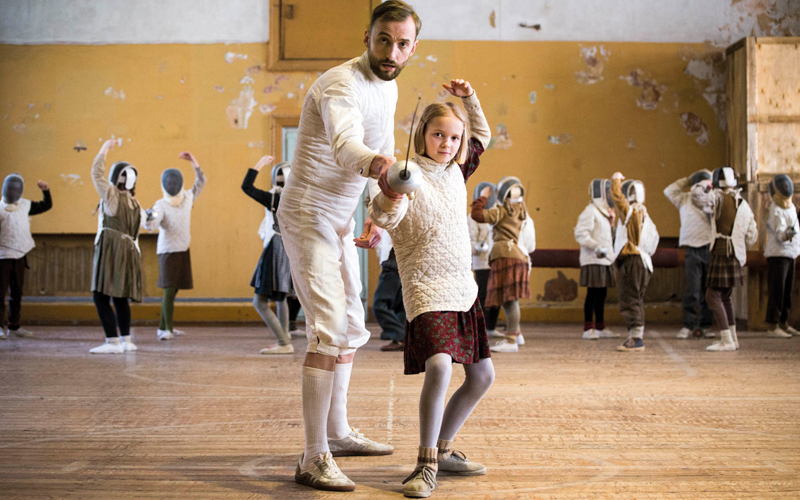 Mart Avandi as Endel Nelis in “The Fencer.” Courtesy of CFI.

“The Fencer,” the overly sincere “based on a true story” film about Endel Nelis, an Estonian fencing master who is forced to flee Leningrad after the war as Stalin ramps up his purge of Estonians, considered  enemies of the State because they were drafted by the Nazis in World War II. Arriving in Haapsalou, Estonia, deemed as far away and as safe as possible by his coach and best friend Alexei, Endel has reluctantly taken a teaching post at a local secondary school. Watched over by the apparatchik principal of the school, a jealous petty functionary who is suspicious of why anyone as accomplished and cosmopolitan as the new teacher would choose such a dirty backwater, Endel is blocked at every turn from leading the students in any kind of appropriate sport. Haapsalou is a final outpost for everyone there. Most of the children have lost a family member to the purge and their education is stymied by a lack of books, teachers, and resources. When Endel decides to form a Fencing Club, all of the students turn out. Endel, antipathetic to teaching and children, is able to stimulate their minds and bodies, first with movement exercises and then with primitively fashioned foils made of cardboard and branch offshoots. The students blossom and the principal boils, ramping up his hunt for scandal on Endel.

Finnish director Klaus Häro and writer Anna Heinämaa have not missed a single cliché in this Rocky style story of underdogs triumphing over massive odds (this is not a spoiler alert because if you can’t see this coming you really haven’t seen many movies and this wouldn’t be the one to start with). Heinämaa can’t really bear much of the blame in this because there is value to this bittersweet story but it is Häro who has chosen a pace that a snail could outrun.

The acting is uniformly very good, especially the children. Endel, played by the soulful Märt Avandi, is sympathetic and as complex as such straightforward storytelling will allow. The principal, Hendrik Toompere Sr., is actually quite good for someone you immediately identify as evil, and Lembit Ulfsak, the grandfather of one of the children, makes the most of his few moments on screen.

Had Häro done the necessary cutting so that this Karate Kid story of fencing moved faster and had fewer soulful scenes you could drive a truck through (actually you could drive a convoy of Soviet era tanks through the interminable scenes between Endel and his lady love), there might have been something there. Living through Stalin was as treacherous, murderous, chaotic, and incomprehensible as the Chinese Cultural Revolution and millions died and even more were sent to Siberia for unfathomable reasons. Häro and Heinämaa could have turned this into more of a thriller had they placed more emphasis on the palpable danger Endel faced as he grew closer to the children and put their interests above his own. Some of the elements were there but the editing didn’t move the story along at a fast enough pace.

Unfortunately, being a sincere, heartfelt true story isn’t enough to recommend this film. One can only hope that someone more skilled will someday tell this story in a more compelling fashion.

In Estonian and Russian with subtitles.

Opening Friday August 18 at the Laemmle Royal and the Laemmle’s Playhouse 7 in Pasadena.