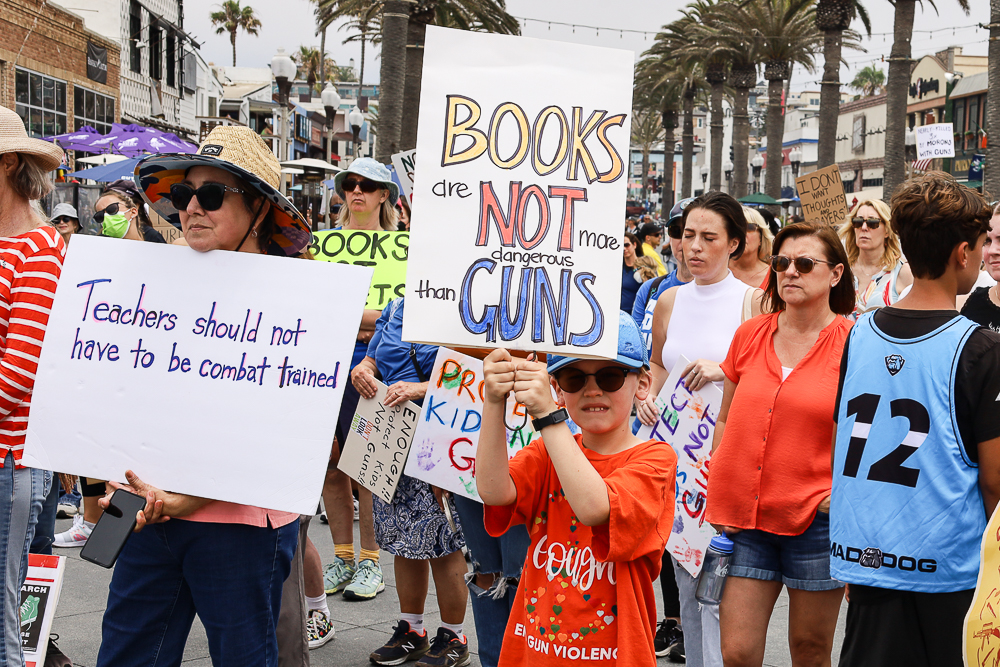 A young marcher advocates books over guns at Saturday's March for Our Lives in Hermosa Beach. Photo by Kevin Cody

Lance Dominguez, of Torrance, spent two weeks working with Hermosa Beach, and Manhattan Beach city hall, police, and fire officials to get a permit for Saturday’s March for Our Lives. The march drew an estimated 200 gun legislation supporters, who met at noon at the Manhattan Beach Pier, and marched to the Hermosa Beach pier for a rally on Pier Plaza. The permit required he pay for security.

“I find it ironic,” Dominguez told the marchers, “that it is more difficult to organize a peaceful march than for an 18-year-old to walk into a store, and walk out with an AR-15, and 100 rounds of ammunition. If exercising my First Amendment right to assembly can be regulated to protect public safety, shouldn’t the same be true of those exercising their Second Amendment right to bear arms?” he asked.

Dominguez played a record message from one of his former Seaside Torrance neighbors, Rebecca Boldrick.

“Seaside is the Christmas lights neighborhood. You may have even bought hot chocolate from Rebecca’s son David,” Dominguez said.

Boldrick introduced herself over the loudspeakers as a former Torrance School District teacher. Her son David, and daughter Lauren attended Seaside Elementary, Calle Mayor Middle School, and South High School before the family moved to Parkland, Florida in 2016.

“The Torrance School District  began active shooter drills after the mass shooting in 2012 at Sandy Hook Elementary School (in Newtown, Connecticut). But I never dreamed my children’s school would have an active shooter,” Boldrick said.

On Feb. 14, 2018, Boldrick’s son and daughter were in class at Stoneman Douglas High School in Parkland, when former student Nikolas Cruz, 19, opened fire on students and teachers with an AR-15 assault rifle, killing 17 people and injuring 17 others.

The following month, her son David Hogg, co-organized the inaugural March for Life on Washington D.C. Time magazine named him one of the “100 most influential People in 2018.” 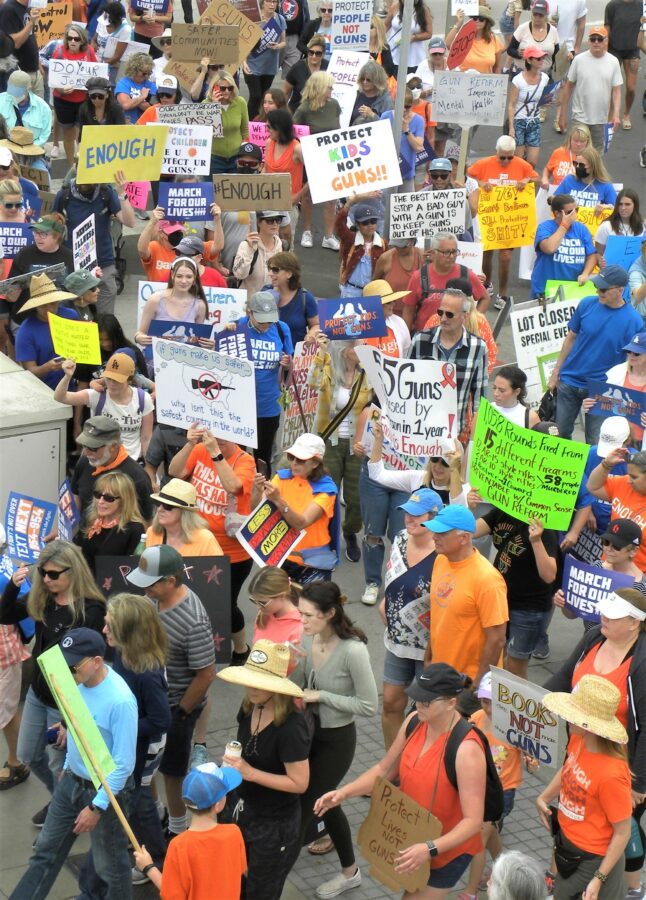 “The March for Our Lives” (South Bay) gets underway at the Manhattan Beach Pier June 11. Photo by Garth Meyer

Saturday’s March for Life was one of hundreds nationwide, held in response to the May 24 killing of 19 students, and two teachers, and the wounding of 17 others at Robb Elementary School in Uvalde, Texas by an AR-15, wielded by 18-year-old Uvalde High School student Salvador Ramos.

Following Boldrick’s recorded address, former Torrance school counselor Christine Macinnis told the marchers, “Over 90 percent of mass shootings are by young white men. But it is easier to get a gun than a therapist… We can’t keep saying this is a mental health issue without providing mental health.”

Assemblymember Al Muratsuchi, who was reelected last Tuesday to a fifth term representing  the 66 Assembly District, said California has the strongest gun laws in California. Its 111 gun laws include background check requirements; and a “red flag” ban on “high risk” people having guns..

“I’m proud to say every time the National Rifle Association releases a scorecard, I get an F,” Muratsuchi said.

The rally was briefly interrupted when a man, who declined to identify himself, approached the speaker stage and shouted, “What about the pharmaceutical industry? They kill more people than guns.” (Prescription drugs are the third leading cause of death, after heart disease, and cancer in the United States and Europe, according to the website PubMed.com).

Marcher Justin House, of Hermosa Beach, guided the anti protester away from the stage. He and Hermosa Beach Police Josh Droz, kept the man engaged in conversation until the rally ended, approximately 30 minutes later.

Start of the march

Lunch at the Strand House was underway. Spikeball on the beach too, on an overcast June day.

On the sidewalk, a young Black woman held a piece of cardboard aloft as she walked toward a crowd gathered on the Manhattan Beach Pier.

Other signs and blue shirts converged and a voice from a megaphone began.

A bearded man with a long skateboard stood at the edges holding a yellow flag: “Don’t Tread on Me.”

The march went up the Strand walkway.

“No more silence! End gun violence!” continued the chants. “Kids should have fun, not run from a gun!”

More signs amidst the marchers made other statements: “We call B.S., vote them out”; “21st weapons, 18th century laws”; “The best way to stop a bad guy with a gun is to keep the gun out of his hands”; “A well-regulated militia didn’t kill our kids.”

Marchers were greeted at the Hermosa Beach Pier by a group of red-shirted 10-year old girls soliciting lemonade sales for their club soccer team.

The “March for our Lives” event cost $7,000, for permits, security and supplies, organizer Dominguez said, paid for by a grant from the national office of March for Our Lives.

A Torrance resident and single father of three young children, Dominguez had never before been involved in planning an event like this.

“I had absolutely no clue what I was getting myself into, but I’m glad we pulled it off,” he said. “Because of the people who are afraid to speak up, my voice has to be louder.”

He noted plans to re-form a South Bay chapter of March for Our Lives in local high schools.

Speaker Nina Tarnay, a Manhattan Beach mother of three, announced to the crowd Colorforchange.org, a project she co-founded which allows people to download and color postcards to send to political representatives. ER