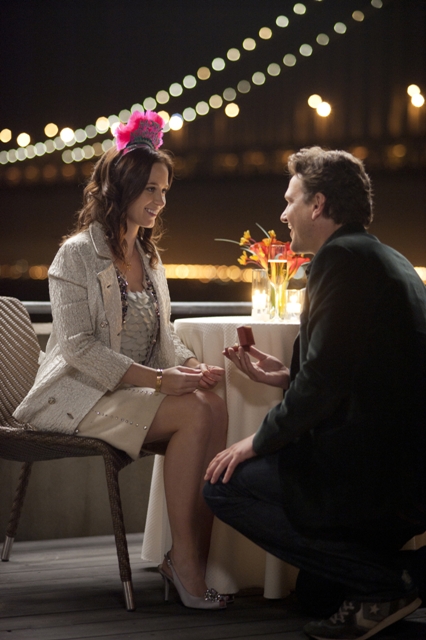 “The Five-Year Engagement” is a pre-wedding present from Nicholas Stoller (director/co-writer) and Jason Segal (co-writer/star), the duo responsible for “Forgetting Sarah Marshall” and the latest Muppet movie. Clever, sharp, warm-hearted without cloying sentimentality, “The Five-Year Engagement” plots the relationship of Violet, whose dream of an academic career in her chosen field, social psychology, run smack into the culinary ambitions of her beloved Tom.

Meeting cute on New Year’s Eve, Tom realizes that Violet is the girl of his dreams and proposes several months later. Their engagement party is a great success attended by all, including Violet’s two sets of grandparents from England (a running joke best seen and not described). All is going exactly as planned, an important factor for Violet the perfectionist, until life takes a sharp left turn. Violet had applied for a post-doctoral fellowship at Berkeley in order to stay close to Tom and his work and is devastated when it falls through. But hope springs eternal in the form of a letter of acceptance into a similar program at the University of Michigan. Tom, a chef, recognizing that his profession is more moveable than hers, gives up his job and follows her to Ann Arbor where things end up being a bit more one-sided than he had anticipated. Bump after bump in the relationship leads to postponement after postponement and the circumstances of Violet’s success and Tom’s feeling of failure begins building a wall between them.

Although “The Five-Year Engagement,” much like its title, drags a bit toward the middle by loading the viewer with repetitive details of the relationship, this film is an unabashed winner. Jason Segal, Tom, is eminently watchable with the limpid pools he has for eyes and the soft quivery lips and doughy frame he uses to portray an only recently housebroken puppy of a man. Joy and heartbreak wash across his face like a slow summer breeze and there is no way you can escape being drawn in by this sympathetic man/child. Expert at slapstick, he is also achingly real in conveying emotions both large and small.

Emily Blunt, Violet, is fast becoming the go-to romantic lead with a light, deft touch, as evidenced previously in “Salmon Fishing in the Yemen.” Pretty with the ability to be goofy, Blunt is a throwback to the heroines of the screwball comedies in the 1930s. She is the perfect match for Segal and gives as good as she gets in terms of slapstick and her emotional reservoir. These were two people you wanted as friends and for whom you ached when things began to fall apart.

The supporting cast is outstanding, made up of names and faces you may or may not recognize. Tom’s parents are played by Mimi Kennedy and David Paymer, great character actors of stage and screen and you’ll spot Mindy Kaling as one of Violet’s fellow post-docs. Rhys Ifans, as Violet’s doctoral advisor, sincere and yet convincingly reptilian as the villain of the piece, and Jacki Weaver, as Violet’s dour and disapproving mother, speaking the Queen’s English (if you watched or tried to watch this brilliant Australian actress’s Academy Award nominated performance in “Animal Kingdom” you’ll understand the reference), adds just the right touch of frigidity. Watch for a hilarious fleeting cameo by Molly Shannon.

Stoller’s directorial touch is light, generally keeping the pace moving and never sacrificing character or glossing over the shadows hanging over Tom and Violet’s complex relationship. The writing by Stoller and Segal is worthy of special mention because they have tackled a modern day dilemma without looking for the normal pat answer and solution. Traditionally, in the past, the man’s career has come first even when there was equality between the couple and their jobs. Women with career ambitions have often had to put them in abeyance or risk losing the relationship, a relationship that is usually lost the moment that ambitions are stifled. Stoller and Segal have presented just such a scenario without compromise and without diminishing the woman or having her make the ultimate sacrifice; further, they have done it without having the character look like an aggressive bitch. Couple relationships today rest on more than the presumption of equality and Stoller and Segal get that. Lest you think that the film is a feminist diatribe (written by men), it’s not. There is an extremely satisfying, mature, giddy happy ending, even while future issues remain unresolved.

Chosen as the opening night premier for the Tribeca Film Festival, I really liked this film for all of the above mentioned reasons and a few more to boot, and I think you will too. It’s funny, romantic, funny, emotionally complex and funny.

Opening Wide on April 27. Neely also writes a blog about writers in television and film at http://www.nomeanerplace.com