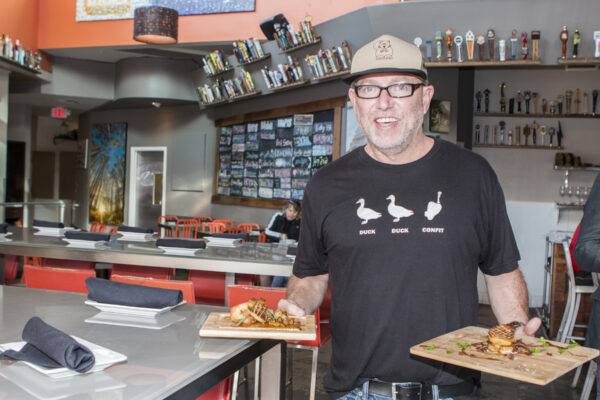 Chef Sean Chaney, a plaintiff in the lawsuit that successfully overturned a state ban on foie gras, celebrated the ruling with a lunch of the controversial dish last Thursday. Photo by Brad Jacobson

Last Thursday the news trucks were out in force in Hermosa Beach as national press converged on a downtown restaurant. Was there a natural disaster? A hostage situation? No, a restaurant was serving burgers and waffles topped with duck livers, and animal rights groups were protesting.

California’s ban on serving foie gras had just been overturned, and Hermosa Beach was in the spotlight because the lead plaintiff was a local restaurateur. The advocate for this luxury ingredient was Sean Chaney, the owner of a casual, lively restaurant that specializes in tacos and burgers.

When Chaney opened Hot’s Kitchen in 2011, he wanted to start a restaurant, not a lawsuit. Foie gras wasn’t even on the menu until shortly before the ban took effect in July of 2012, but Chaney, who self-identifies as a libertarian, decided to feature it in the last month it was legal. His “farewell to foie gras” menu made him a public figure locally, and he became known statewide when he and a group of poultry producers in New York filed to overturn the ban the day after it went into effect.

“This wasn’t what I started out to do, but I thought it was an act of freedom to stand up against these people,” Chaney said. “I didn’t want people who knew nothing about my business telling me what I could serve… It’s legal in 49 other states, it’s a USDA certified wholesome product.”

Foie gras is legal but controversial almost everywhere, and involves humans exaggerating a natural feeding behavior of ducks and geese. These migratory birds gorge themselves before taking long journeys, and their liver swells to store fat for the trip. Gourmets prize the silky texture of that liver, so farmers force-feed ducks – a process called gavage – to create foie gras.

Chaney’s lawsuit turned not on the ethics or morality of the product, but on whether states have the right to outlaw food products designated as wholesome by the federal government. During the two and a half years that courts mulled over the question, Chaney enraged his opponents by sidestepping the law – since the statute made it illegal to sell foie gras, he served it as a “complimentary side” whenever someone ordered a specific hamburger — the balsamic burger, which cost twice as much as most his burgers. They threatened to sue him, he dared them to do it, and a war of words continued.

Then, on the morning of January 7, Chaney received a surprise.

“I had no advance notice – I got a call at 11:30 a.m. from our attorney Michael Tenenbaum,” Chaney recalled. “He started yelling, ‘We won, we won, we won!’ I ran around the kitchen telling the kitchen staff, then I called the owner of Hudson Valley Foie, which was also involved in this case. After he congratulated me, he asked if I wanted to order some, and I arranged for it to be airfreighted… Then I called my parents to let them know.”

Hot’s Kitchen was serving foie gras at lunch the very next day, but Chaney’s opponents had a reaction of their own. PETA, the People for the Ethical Treatment of Animals, had arranged a protest at Hot’s and called all the major news organizations to be there at noon. Naturally they hadn’t told the management, which Chaney said caused comedy when someone in the press called the restaurant a few minutes beforehand.

“We got a call from someone asking, ‘Hey, are there picketers there?’ and I said, ‘No, it’s a quiet morning, there’s nobody here,’ and then minutes later they showed up. They waved signs, and as soon as all the news cameras had their shots, they were gone. PETA said they were drawing a line in the sand… apparently the line was just an hour long. It was funny, really.”

Chaney’s attorney Michael Tenenbaum was at the restaurant that day and was obviously pleased with the result.

“A significant precedent was set by our overturning this law,” he said. “It places a limit on what a state can do in terms of limiting products that are federally approved, USDA certified, and wholesome. If that law had been upheld, it would have created a dangerous intrusion on everyone’s constitutional rights. I believe I was defending the principle of freedom for people to choose what they want to farm, what they want to eat, and what should be on their plate.”

Tenenbaum echoed other foie proponents by claiming that PETA and the other activist organizations had a hidden agenda.

“There’s a very strong correlation between the anti-foie gras [activists] and those who are against eating anything that comes from an animal,” he said. “They perceive foie gras to be an easy target. It’s something most people have never had, and it’s not a billion dollar industry, but a small number of artisan farmers. These animal rights extremists figured they could overpower them.”

The two groups that opposed Chaney and Tenenbaum in court, PETA and Farm Sanctuary, are in fact both vegan organizations, but scoff at the idea that they are using foie as a wedge issue.

“We operate three sanctuaries for rescued farm animals – we also do policy advocacy and were co-sponsors of the foie gras ban legislation,” said Bruce Friedrich, policy director for Farm Sanctuary. “We are a vegan organization, but we simultaneously act to reduce the abuse of animals that are going to be eaten. There are practices that even the vast majority of meat-eaters agree are not acceptable. This includes the battery cages [for chickens], gestation crates, veal crates, and ramming pipes down animals throats to force-feed them.”

Friedrich was eager to argue that these conditions are indeed the business of the state.

“The state of California has an absolute right to regulate cruelty to animals, and consequently an absolute right to ban these practices and the sale of products from these practices,” he said. “If dogs and cats were treated the same way as duck, it would be felony cruelty to animals, and the so-called farmers would be thrown in jail. There is no moral difference.”

Matthew Strugar, spokesman for PETA, put the overturning of the ban in stark terms and warned of the precedent that would be set.

“The concept behind this ruling, that the state can’t make decisions regarding what kind of cruelty their citizens will accept — that general principle is threatening,” he said. “That concept might be extended to the ban on selling shark fins, and might be cited in the attempt to overturn [the law banning sale of eggs from battery hens]. This ruling won’t affect that directly, but there is a challenge by a couple of states. They’ve lost so far, but I’m sure they will try to use this case.”

He vowed to keep up public pressure even as the Attorney General decides whether to appeal the case.

“We will continue to protest restaurants that serve foie gras, here and in other states, whether it’s legal or not in those places,” Strugar said. “We’re not going to give up on this. We will use popular opinion to try to get specific cruel practices outlawed, without trying to sugar-coat that we’re trying to get people to move to a vegan diet and remove cruelty from their plate entirely. The foie ban is one step along the road.”

That fight is likely to go on for some time, and while it does, Chaney and other restaurateurs will keep serving foie. Asked whether he intends to get involved in any other lawsuits, Chaney shrugged. “Who’s to say? I’m not going out looking for a fight, but if someone tries something like this again, I’m not going to back down. I believe in freedom of choice, and if you don’t like that, don’t support me. I’m old enough to make my own decisions, and so are my customers.”