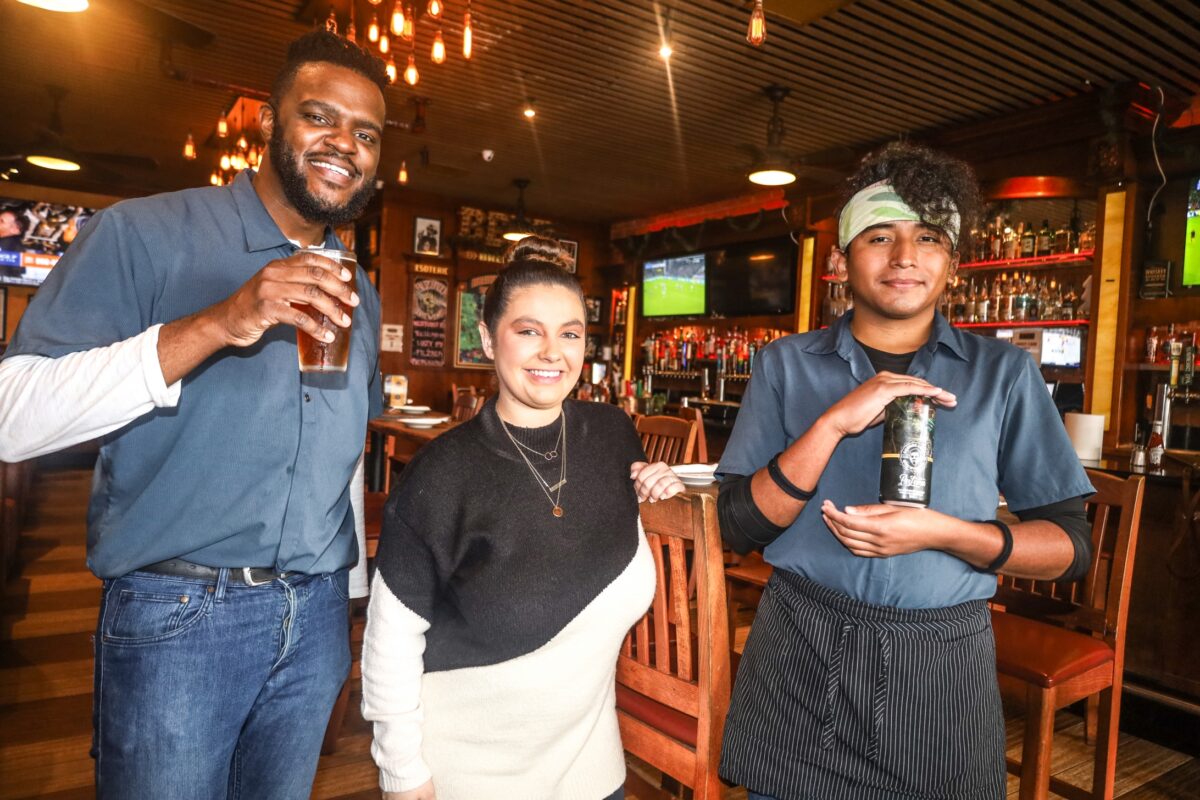 Brewco has slimmed down their menu over the years, and is better for it

Over the years I’ve praised some establishments for going above and beyond what was expected. When a local sports bar started serving specials based on the home city of the teams that were on the field during playoffs, I cheered the initiative even though I didn’t care who won. A neighborhood bar that comes up with a really good cocktail list, a standard Italian place that breaks out the homemade ravioli with housemade sausage, it’s all worth celebrating.

On the other hand, sometimes the best thing for a place to do is forget the embellishments and just do what they do well. I have watched the trajectory of one particular place with interest, a go-to spot for decades. Brewco was at the forefront of the beer revolution when they opened as Manhattan Beach Brewing in 1991, and for a long time they had a menu as varied as any other local restaurant. A decade ago, they were serving over a dozen entrees, which included ribs, seafood enchiladas, prime rib, and kebabs, plus a dozen salads to start the meal with.

It was dazzlingly ambitious, but also a big strain on a small kitchen, and some of the more complex items just didn’t work. At some point, someone decided to look at what they sold the most of and made best, and the menu shrank.

There are now three entrees, or a few more, depending on how you classify the items on the Keto list. The current menu is heavy on burgers, pizza, tacos, and sandwiches.  And that’s okay, because they do them all consistently well. I miss their Greek lamb taco, but at two recent meals we found that there’s still plenty worth ordering.

The starters we tried were their warm spinach and artichoke dip, asparagus fries, and a “BLTA” salad from the Keto menu. The BLTA stands for bacon, lettuce, tomato, and avocado, or maybe arugula, because they were both there. Also present were cucumber, feta, and allegedly chili flakes, but those were used so subtly that I didn’t taste a hint of them. This technically makes it a BLTAACFACF salad, but sanity prevailed when they named it. There’s also a lemon vinaigrette, but including that in the acronym makes it even more unpronounceable. It’s nothing special when it comes to innovation, but a good start to a meal.

The warm spinach and artichoke dip is one of the rare dishes invented in the 1950s that anybody wants to eat now. It’s made with mayonnaise as so many fad foods were then, and that richness and the vegetable flavors are complemented with garlic and parmesan, and given a little tang of lemon. This had the balance right and was served with tortilla chips and salsa. I’m not sure who would eat that salsa when the artichoke dip is right there, but I tried it and it was as good as I’ve had in some local Mexican restaurants.

The only thing that didn’t work particularly well was the asparagus fries, which are a great idea – just the vegetable in a crispy parmesan and beer crust. Unfortunately, on the day we ordered them they were a bit over-fried so that the batter shattered on the first bite and fell off. The fried items we ordered on a later trip had no such problem, so this could have been a momentary aberration.

The mains we’ve recently tried were housemade chili, a “Fuch’s Office burger,” a chicken parmesan sandwich, and an order of fish and chips. The Office Burger is a homage to the burger served at Father’s Office, a Santa Monica landmark where someone came up with the idea of topping a patty with caramelized onion, bacon, gruyere cheese, Maytag blue, and arugula. That burger propelled the tiny bar to worldwide fame, and this representation of it is a faithful copy. It is a wonderful mess, so roll up your sleeves, wear an old shirt, and dig in. 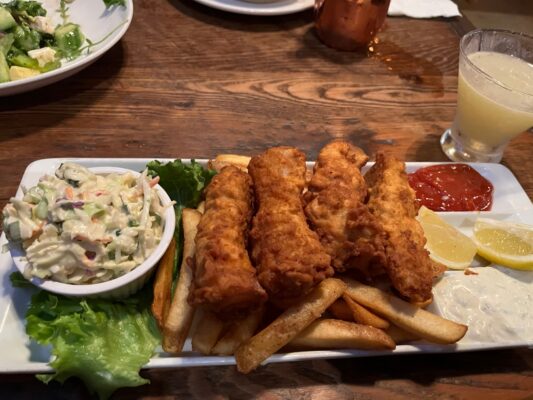 A plate of fish and chips at Brewco in Manhattan Beach. Photo by Richard Foss

The fish and chips were the classic well executed, four large cod filets in a flaky crust with not a spot of oiliness. The tartar sauce is good, the cocktail sauce a bit heavy on the horseradish, and appeals to those who like a moderate spice kick.  It came with more fries than we could eat, and those were properly crisp with a soft interior.

The chili was the only letdown of the meal, the broth thin, and one-dimensional, with little or no cumin, and only a hint of smoked paprika. It was made with a mix of filet mignon and ground beef, and since filet is very tender but not very flavorful, it didn’t have much meaty character. Texas chili fanatics usually use a more flavorful meat like chuck that starts out tough but becomes tender after long simmering. There are all kinds of chili and some people like this style rather than the thick, smoky version, so your experience may differ.

I have no complaints at all about the chicken parmesan sandwich, except that more restaurants don’t serve them like this. When you get this at an Italian deli these are usually on a long crusty Italian roll, but the brioche bun they use here is a fine substitute. The breaded chicken overflows the bun on all sides and has just the right amount of sauce, with some fresh basil adding an herbal kick. My wife is a big fan of sweet potato fries and ordered them as a side item. As much as I liked the regular fries here, they’re worth the extra buck-fifty.

As for what to drink with dinner, you’re in a restaurant called Brewco, so it’s no surprise that they have any beer drinker covered. The food menu thinned out but not the number of taps and bottles, and they’re still a leader in beer bars. Brewco has a surprisingly good cocktail menu with some items invented in house. I recommend the Endless Summer, hold the Red Bull – it’s a great mix of tropical flavors even without the sweet caffeine shot. The old fashioned with spiced cherry is a hit too, so if you like mixed drinks there are things worth exploring.

Deserts are offered, and we tried the key lime pie. It’s purchased rather than made in-house, but they know where to shop and it wasn’t too sweet. We were plenty full, because the portions here are generous, so didn’t try the ice cream sandwich or cheesecake. Brewco is a value for a place just steps from the beach, with no entree over twenty bucks. If a sports bar and grill by the beach is what you’re looking for, they have what you need and serve it with a smile.