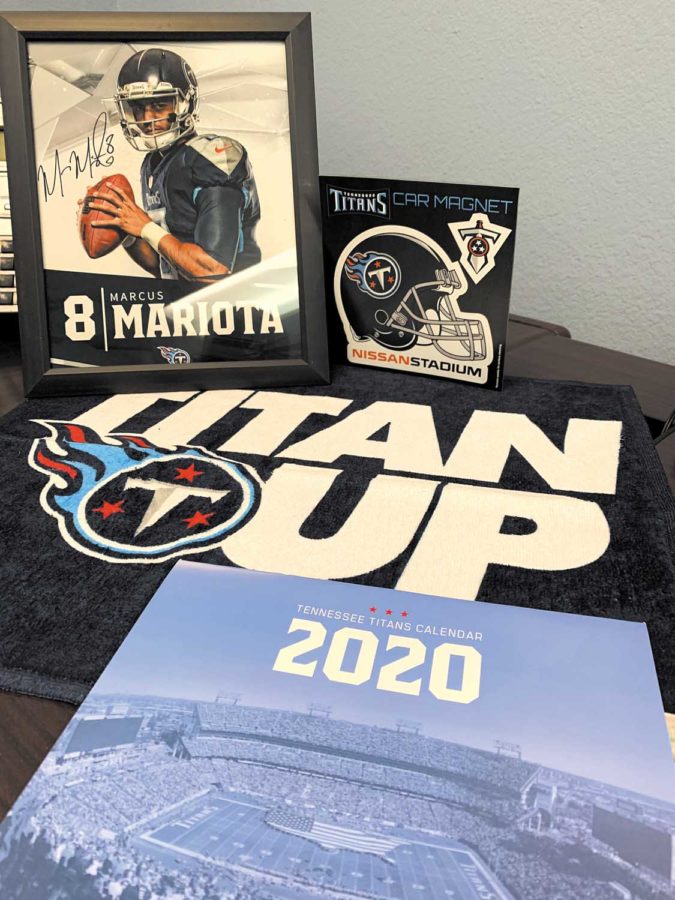 A care package sent by the Tennessee Titans to Redondo Beach for an autistic man met in the field by a Redondo Beach police officer. Photo courtesy Evan Sackett

A Redondo Beach police officer made a developmentally-disabled man’s day shortly after the end of the holiday season — just weeks after police were called to a disturbance call allegedly caused by that same man.

On Dec. 12, RBPD Officer Evan Sackett was one of a group of officers called to respond to a psychological disturbance and evaluation call where a man was said to have assaulted an employee and barricaded himself in an office of a company servicing people with developmental disorders.

According to a police report, when a team of officers entered the building and encountered a 30-year-old man named Joey, who refused to listen to officers. Then Sackett heard Joey saying something aloud — “We start talking to him and all he says is ‘I want to go to the computer, Marcus Mariota, 2015 Tennessee Titans,’”  Sackett recalled — and it clicked. This wasn’t a typical “bad guy,” but someone dealing with autism.

So the officer, a football fan himself, played ball and began talking about the Titans and Mariota, one of the team’s quarterbacks. Joey lit up — to Sackett, it seemed that no one else in Joey’s world either knew who Mariota was, or at least cared about the game and the Titans the way he hoped they would.

That opened Joey up, calming him down enough for Sackett to learn who he was: a young man that loves football, and loves cookies; a man with severe developmental disabilities who was abandoned by his family, and living at a caregiver home; a man that falls into crisis around the holidays.

Before long, Joey underwent a field evaluation with a mental health clinician, and was released to his caregiver before undergoing further evaluations.

But Joey’s story stuck with Sackett, who thought about him well into the night.

Then an idea struck him: send out a line to the Tennessee Titans, and see if they can help out with making Joey’s holiday a bit brighter.

To his surprise, the Titans responded, sending out an autographed photo of Mariotta, a rally towel, a car magnet, and a calendar. Sackett was stunned and stoked; he wasn’t able to get back to meet with Joey until the new year, but when Joey returned to Redondo, Sackett was there to give his new friend the care package, alongside a few packs of cookies. Joey was happy to see the man he knew talked football with him, and was ecstatic when Sackett shared the gifts sent by the Titans.

Joey was unable to be reached; a representative for the organization supporting him confirmed the story, but declined comment and requested it not be identified, and that photographs of Joey not be released, so as to protect their clients’ identities.

Kate Guerra, a spokesperson for the Tennessee Titans, said that the organization is happy to reach out and help Titans fans from across the world, “but truly all credit belongs to Officer Sackett for wanting to do something kind for [Joey].”

“It’s pretty amazing to know that stuff is going on, especially to know we’re not asking him or anybody in the organization to do those kinds of things. That’s all on his own,” Kauffman said. “We empower them to make good choices and to try to provide extra value to the community.”

Kauffman also noted that on the morning of the incident, the day’s patrol briefing included training on recognizing individuals with autism in the field. The department has also worked with community organizations, such as the Autism Society of Los Angeles, to raise awareness in the community and among its officers.

“It’s great to know that these things are ongoing and that when we make a commitment to training, to awareness and to the community that we stand by it,” Kauffman said.

The story, Kauffman said, is a tribute to the department’s vision of ensuring its officers aren’t just policing the city, but men and women that are woven into Redondo Beach community’s fabric.

For Sackett, there was something simpler to it.

“We may be from different walks of life, but we have the same interests. I wanted him to see me as a friend, not just a cop,” Sackett said. “It was cool knowing that football was able to help me make a connection and calm him down…it’s something that I’ll remember for the rest of my career and the rest of my life.”