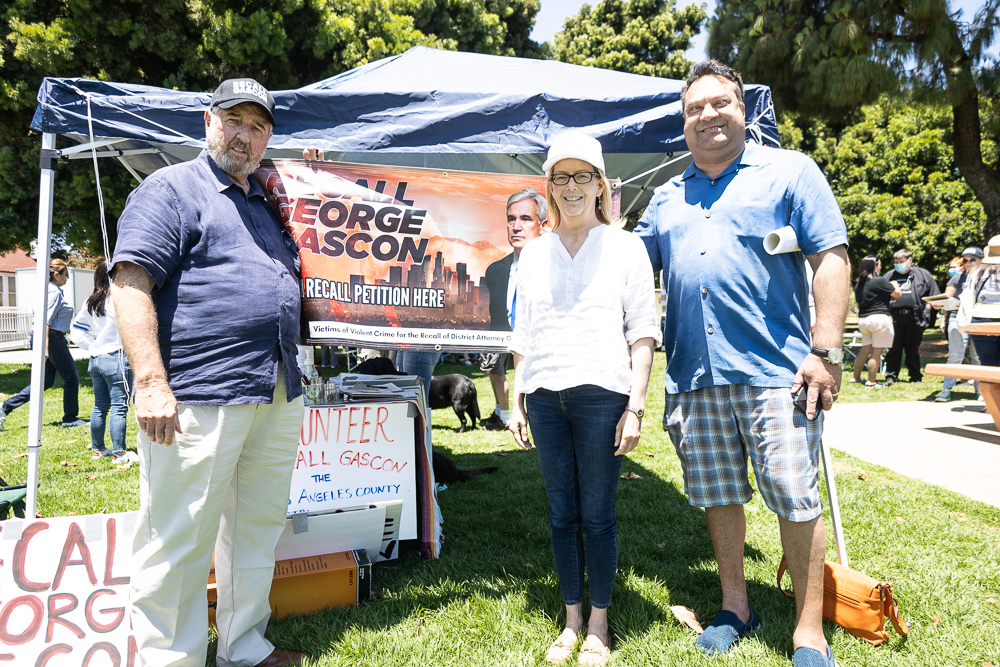 Kristy Ulley, of Rancho Palos Verdes, and Kip Riggins of South Redondo Beach were among those calling for DA George Gascon’s recall Sunday at Polliwog Park. “We don’t want Los Angeles to end up like San Francisco, where Gascon came from,” Riggins said.

Cooley served as Los Angeles District Attorney from 2000 to 2012, when he resigned to run as the Republican candidate for California District Attorney against Democrat Kamala Harris. His loss paved the way for Harris to become President Joe Biden’s vice president.

“The reason for the recall,” Cooley said, “is Gascon’s directive to his deputy district attorneys not to prosecute ‘quality of life’ misdemeanors, such as trespassing, prostitution, drug possession, disturbing the peace and loitering.

“Gascon is abandoning the core duties of a prosecutor. He is abandoning crime victims in the courtroom and at parole hearings. If this recall fails, all is lost.”

“The challenge,” Cooley said, “is collecting the 600,000 signatures needed to put the recall on the ballot. If that happens, the recall will pass by a landslide,” he predicted.

The directive that Cooley said triggered the recall, was issued Dec. 7, 2020. Gascon wrote in its introduction:

“Los Angeles County courts should not be revolving doors for those in need of treatment and services. Currently, over 47 percent of those incarcerated pre-trial on misdemeanor cases suffer from mental illness. Likewise, nearly 60 percent of those released each day have a significant substance use disorder. Meanwhile, individuals experiencing homelessness account for almost 20 percent of arrests in Los Angeles, despite comprising only 1.7 percent of the population. The status quo has exacerbated social ills and encouraged recidivism at great public expense….

Despite the immense social costs, studies show that prosecution of the offenses driving the bulk of misdemeanor cases have minimal, or even negative, long-term impacts on public safety. Agencies equipped with the social-service tools necessary to address the underlying causes of offenses such as unlicensed driving, sex work, drug possession, drinking in public, and trespassing 2 are best positioned to prevent recidivism and will thus be empowered to provide help to those in need.” Mayor Hadley said she supported recalling Gascon because, “Public safety is our number 1 job. As Chief Abel said when I introduced the council resolution in support of the recall, the California Penal Code has not changed. What has changed is the District Attorney’s decision not to prosecute misdemeanors.”

Hadley and the Manhattan Beach Police department will host a virtual Town Hall meeting to discuss public safety, on Tuesday, June 8, from 6 to 8 p.m.

The meeting will take place via Zoom. For the Zoom meeting link, visit City MB.info. ER