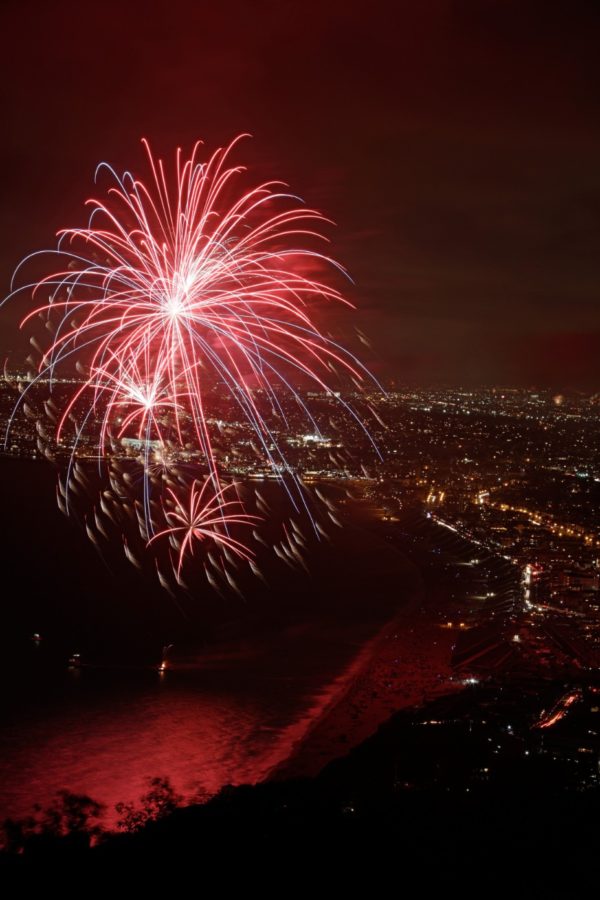 Fireworks shoot off the coast near RAT Beach on July 4, 2016. Photo

Due to short notice and the advice of public safety officials, the Redondo Beach City Council elected to not take on a revived South Redondo fireworks tradition after months of planning and fundraising, despite repeated well-wishes from its council members and mayor.

The show, scheduled for the Fourth of July, would have returned Independence Day fireworks to the city, after the City Council moved Redondo’s celebration, traditionally scheduled for July 4, to the previous Saturday, July 1.

“I hope to see something happen,” said District 1 Councilman Nils Nehrenheim, who represents the area. “It would be a tragedy if it doesn’t.”

The non-profit group Palos Verdes Fireworks approached the City of Redondo Beach last week with a request to move their planned fireworks barge north, from to the coastal waters off of Torrance’s RAT Beach to waters off of Avenue I.

According to a letter submitted to the City Council by PV Fireworks organizer Rick Bender, the Los Angeles County Fire Department has held up a permit to shoot fireworks based on public safety concerns held by the City of Torrance. Getting Redondo’s approval, they indicated, would open up headway with the County.

Torrance Mayor Pat Furey, who spoke in an interview one day after the Redondo Council meeting, said that he had only recently been approached by PV Fireworks. His city’s police and firefighters, he said, were either already scheduled to have days off or to work during Torrance’s Civic Center fireworks display.

“We would have to ramp it up for that, and frankly, I don’t have that money set aside,” Furey said. “I don’t know what the [cost] may be, but I think at this point it’d be almost impossible.”

That’s the same issue being faced by Redondo’s public safety staff. Typically, Redondo police and fire are told that all personnel must be available for July 4, to cover both the city’s Fourth of July 5K/10K run as well as fireworks displays at Seaside Lagoon.

But last December, the Council moved the July 4 fireworks to July 1, to spare their public safety officers an exceedingly long day of managing crowds.

“I would hate to make a decision to say we have a good plan to do something at the last moment,” Redondo Beach Police Chief Keith Kauffman said, considering pedestrian safety. “I would rather have people upset at me now than upset at us on that day.”

As Redondo Mayor Bill Brand said during the Council meeting, the decision was made, in part, because the South Redondo fireworks would help fill the local demand for a July 4 show.

“We made the boneheaded move to move our fireworks to July 1st, which I’ll never approve again,” Brand said.

PV Fireworks’s show was intended to provide a spiritual successor to the shows run by the family of Jackie Briles, who had privately organized fireworks off of RAT Beach since 2000 in honor of her late husband Paul.

When Jackie Briles died in 2016 at 95 years old, and the family opted to discontinue the practice, Bender’s organization hoped to fill the void by raising funds to keep fireworks firing.

Pedone’s Pizza owner Mike Russell was among the first to jump in, donating $50,000 to sponsor the show, and passionately pleaded for Redondo to give their blessing.

“All we want to do is put on a show for the local people of the Riviera, South Torrance, South Redondo Beach area,” Russell said. “If this does not happen, there’s going to be a tremendous amount of public blowback from the area around which I have my business in.”

While the program’s final approval lays in the hands of LA County Fire, Torrance’s approval may be the deciding factor.

“For us to make a decision back in December, relying on the City of Torrance, probably wasn’t the best decision,” Councilman Nehrenheim said, before telling the public to “go to Torrance’s [City Council] and put pressure on them.”