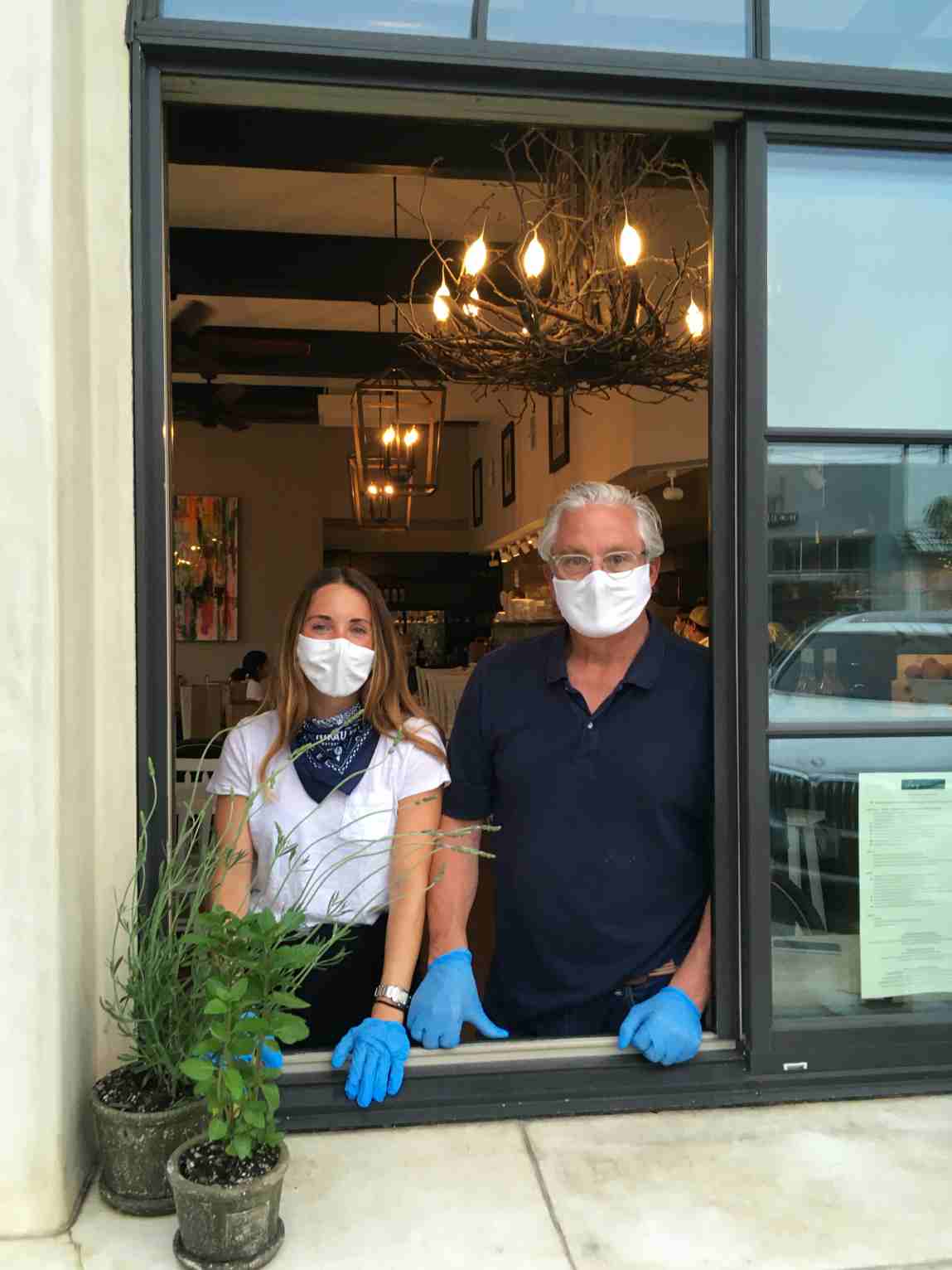 One of my favorite American meals is fried chicken — the real thing, not the not the stuff sold by a certain franchise operation best known by three initials. An expert in the fried chicken business referred to their product as “nothing more than a fried dough ball wrapped around some chicken.” That expert was a fellow named Harlan Sanders, and he had a strong opinion about the company’s product because it was his face on their sign, and he felt that the new owners had desecrated his recipe.

I don’t have the personal stake that Colonel Sanders did, but I grew up with top notch fried chicken thanks to a grandmother who learned to make it in Maryland. It was a cherished meal around her house, and the whole family would get together for a ritual that involved happy conversations, huge amounts of good food, and a complete cleaning of the kitchen the next day.

Apparently fried chicken with all the trimmings is a comfort food in many families, and as such it has become a regular Sunday special at several restaurants around the South Bay. These include Slay’s Italian Kitchen in Manhattan Beach and Barsha in Hermosa, and we tried both on successive weeks. I decided this was worth writing about partly because both offerings are unexpected: there’s nothing Italian about Slay’s chicken and little that is Tunisian about Barsha’s.

Instead they illustrate something avid fried chicken fans know: there are an incredible range of styles. Traditional batters can be made with cornmeal or flour and modern versions with panko crust, and seasonings range from just salt and pepper to versions that have strong herbal notes and a delicate cayenne kick. (This is without even considering the Nashville hot chicken craze, because anything you have to wear a hazmat suit to cook is not about subtly accenting natural flavors.)

Barsha’s Sunday special is offered as part of a dinner deal for two that I briefly mentioned in a column a few weeks ago. For $34 you get a serious helping of fried chicken with a pie tin full of cheddar pasilla cornbread and mashed potatoes, and it’s a deal. The chicken is a boneless mix of light and dark meat seasoned with Middle Eastern spices like turmeric and sumac that add subtle exoticism to an American classic. The panko-based batter creates a tempura-like crispness when it’s fresh from the fryer, which is a problem and an opportunity. It’s a good idea to pop the lid on the package before driving home so steam from the hot chicken doesn’t make that crust soggy, but then again that’s probably a good idea no matter where you get it from. If it does arrive home a little damp, a moment or two at low bake in the toaster oven will revive it, as well as fill the house with an appetizing scent.

The sides here are good mashed potatoes and excellent cheese-crusted cornbread with just a hint of pasilla chile, both good accompaniments but lacking balance. A side salad or some greens would make a good meal even better, and you might consider knocking one together before heading over to pick this up or arranging delivery. You don’t need to open a bottle of wine because they offer a half-liter of red, white, or rose for a mere ten bucks, and I’d suggest the rose to complement the spice in the batter. With or without the wine, it’s a heck of a deal for the price.

Slay’s Sunday fried chicken dinner is for one person rather than two, and includes creamed spinach and mashed potatoes with gravy. The large half chicken is served bone-in, crusted with a traditional Midwestern-style flour batter with distinct herbal notes. Chef-owner David Slay is from Missouri, and his chicken represents Midwestern ideas about flavor: subtle and savory with rich, but not sharp, flavors. The batter is not as crisp as you get with a panko or tempura crust, but it isn’t supposed to be. It’s juicy inside but not greasy; classic picnic basket chicken that is good hot or cold. 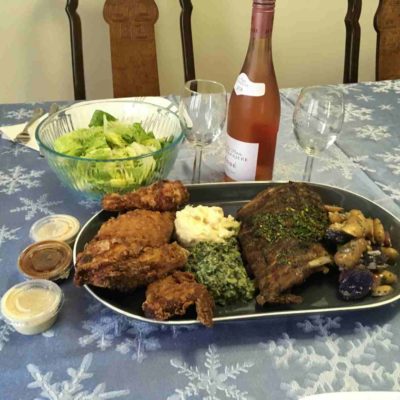 This is how the chicken and rib dinners look when they’re unpacked. Photo by Richard Foss

The creamed spinach that came with it had the full vegetable flavor you get when making this with fresh vegetables, and will be a revelation to those who grew up on frozen or canned versions. With the mashed potatoes and gravy, it was a very substantial meal for one person, enough that I got to find out how good the cold leftover chicken was the next day. We counted it a well-spent twenty-five bucks.

Another meal I had been missing lately is barbecued ribs, since I don’t fire up the barbecue for these unless company is coming, and lately they aren’t. Since Slay offers ribs daily I had to try them, and they were a mix of traditional and modern ideas. These aren’t the thick, intensely smoky Texas ribs, but a leaner cut of meat with gentle smoke flavor that complements a spice rub. The sauce is on the side and is sweeter than what you find further south, with just a hint of chili and black pepper heat. To that traditional set of ideas Slay added a topping of rosemary gremolata herb sauce, which was interesting and unexpected. It was an excellent complement to barbecued ribs; I’m going to want to try playing with that idea the next time I fire up my smoker and grill.

The ribs came with a potato salad composed of halved baby purple and Yukon Golds with a mild balsamic dressing, and since we like some fresh greens we got a Caesar salad on the side. Slay’s Caesar dressing has a fine balance with a light touch of anchovy, and though we didn’t need it to feel replete it helped round out the meal.

The South Bay has been pretty limited when it comes to fried chicken, and I hope both of these restaurants will keep serving it after things are back to normal, because it would be great to try both of these fresh from the fryer. I’m also looking forward to trying other renditions around town – Zinc at Shade is also offering it as a Sunday dinner, which makes me wish there was more than one Sunday each week. Then again, in this period when it’s so easy to lose track of time, maybe it’s best to have something to look forward to every seventh day.