From the Sea to the Hill [business profile] 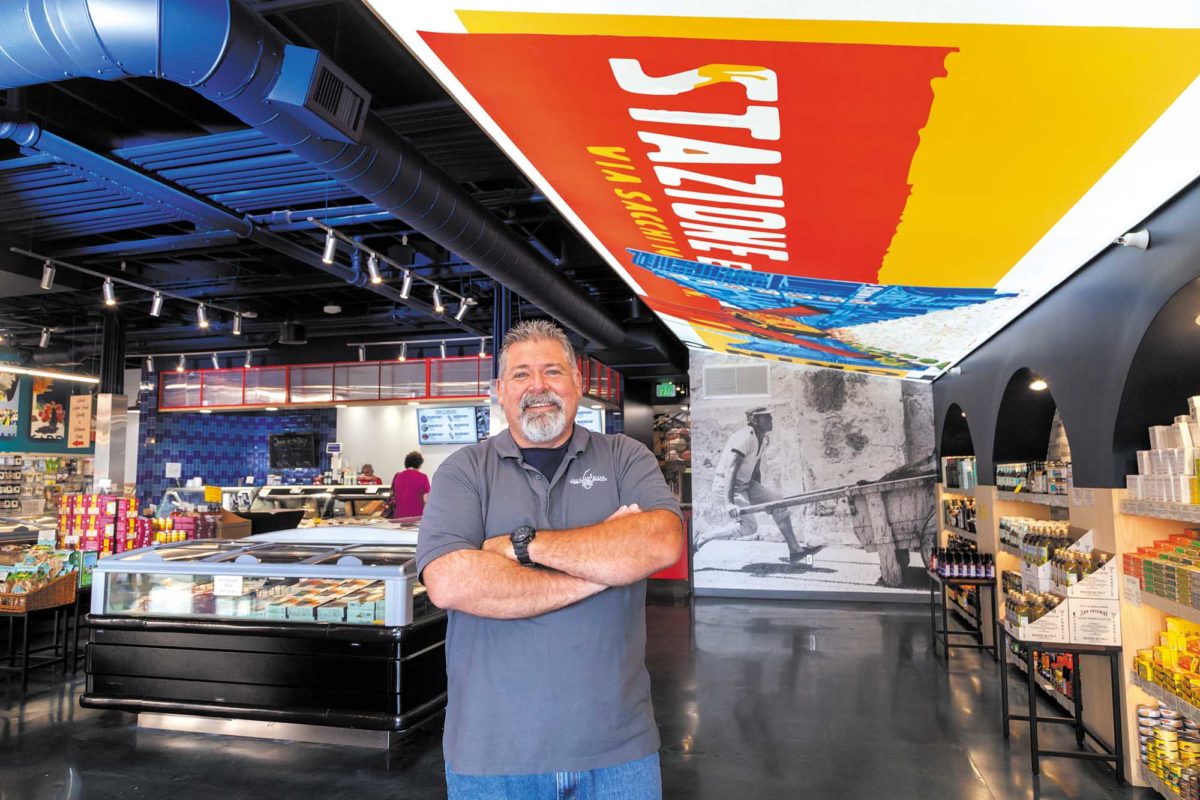 Manager Tim Aupperle began working in the food industry on his family’s farm when he was 9. Photos by JP Cordero (CivicCouch.com)

Manager Tim Aupperle began working in the food industry on his family’s farm when he was 9. Photos by JP Cordero (CivicCouch.com)

One of the greatest advantages for any restaurant along the California coast is an ocean view, and it’s been the case since visitors arrived in buggies, Model T’s, and red car trolleys. The same goes for private homes, architects know that a dining room with a vista of the Pacific is a sure selling point. Even so, those who plan meals often overlook the most important aspect of the meal — finding the best quality seafood to serve.

Those who pay attention to this detail make a beeline for the Great American International Seafood Market, which opened last December in the Golden Cove Shopping Center. It’s a partnership between store manager Tim Aupperle and seafood industry veterans, siblings Buddy and Joe Galetti. whose father was a fisherman in San Pedro in the 1950’s. Aupperle says that while the name is long, it reflects the ambition the trio brings to the business.

“Our parent company imports fish from all around the world, and distributes it to about 14,000 retailers around the country. We were going to call this market Great American Seafood, but since we were also going to have a lot of imported items, I decided we needed the word International. We carry seafood from all over the world, and we wanted to make sure people understood that.” 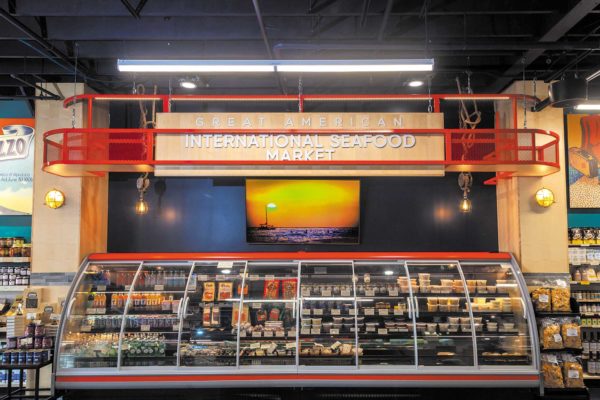 The salad and deli case at Great American International Seafood.

“My family raised animals for food on a ranch near Palmdale, and by the time I was nine years old I was learning slaughtering and butchering. At 13 I made sausages at an Italian deli, and at 14, I started working at a butcher shop in Burbank. At 17 I was the manager. When I took over the butcher shop, we had a tiny section with frozen shrimp, and I expanded it to include other seafood items. After that I spent time as a meat jobber [wholesale dealer] before going back into retail. I spent 28 years at Whole Foods Market, and ran their meat and seafood operations for 25 of those years. I was in at the ground floor for the animal compassion standards and the seafood quality standards set up there. I worked with Dr. Temple Grandin and other scientists and animal rights activists to make sure we were doing the right thing.”

Having spent so much time learning about meat and seafood, it’s no surprise that Aupperle has strong opinions about how to cook it. When asked whether most Americans appreciate good seafood, he faulted some popular trends.

“If you look in much of Asia, chefs focus on enhancing the flavor of the food, rather than covering it up. Here in the USA the meat and fish are just a vessel to get the sauces into your throat. When you have really good fish all you need is a little olive oil, salt, and pepper. You should taste what you’re cooking and really enjoy those flavors. I try to get people to do that even though we sell all kinds of sauces, from cucumber-dill to sweet bourbon.”

If you’re coating everything with spices and marinades then you may not bother to buy top quality materials, but if you like simple preparations it’s money well spent. When asked why the market carries so many kinds of shrimp both fresh and frozen, Aupperle explained when he’d use each. 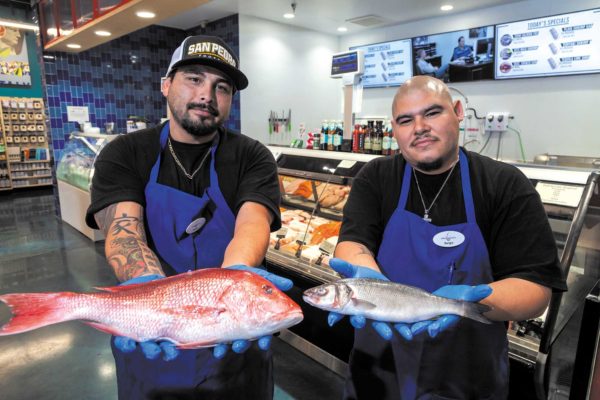 “For fried shrimp I’d go with run of the mill farm-raised, because you’re going to mainly taste the batter. For sautéed shrimp or shrimp in a salad I’d get farm raised or Mexican wild, because you’re going to taste the butter or dressing. You want good shrimp for a sauté because you’re going to get the “grape pop,” the snap when you bite into it like a natural casing hot dog. Some people use bay shrimp in a salad, but I don’t because they’re usually over-salted – they have to salt them to get the shell off. If I’m skewering shrimp for the grill, I like Alaskan spot prawns. They’re fantastic, and if you’re lucky enough to get them with the roe then boil them and eat them. The roe is like candy, it’s fantastic. A lot of people overcook shrimp, because they don’t realize that they keep cooking after you take them off the heat. Either plunge them briefly into cold water to stop the cooking process or take them off the fire just before they’re done.”

Going into detail about cooking comes naturally to Aupperle and his staff – they see it as part of their job.

“We have customers who look at something in our fish case and ask, “What is that and what do I do with it?” We tell them based on our experience, and they usually come back and say, that was terrific, give me more, or, “I loved it, what should I try next?” Only a few times have people said, “I tried your suggestion and didn’t like it.” When that happens, I give them something different. It’s not always just our people who are involved. You’d be surprised at how many conversations start when someone asks the person behind the counter a question, and someone who’s waiting interjects. It’s an interesting dynamic. They might have something that I haven’t thought of. It creates a light-hearted environment, where people don’t feel so rushed.”

Since the market opened, Aupperle and his staff have gotten insights about local tastes, some of which were surprising.

“I tried offering tilapia, and out of 200 or 300 pounds I sold 10, and only because it was on sale. One customer told me he wouldn’t shop here if I carried it. The customer base here doesn’t like it even though it’s currently the number two selling fish in the world. The first is shrimp, and salmon is third. Here, swordfish is our number one selling item, then salmon, then Chilean sea bass. This store sells more swordfish than any other place I’ve worked at in all my years in this business. It’s landed locally, and a lot of people want to support local fishermen. We have other local items too – sardines when they’re hitting, white seabass, squid, opah from San Diego, we get black cod and lingcod from Santa Barbara, true cod from the Pacific Northwest, rockfish from Ventura. We sometimes get live abalone from Goleta and Gaviota and beautiful, beautiful abalone. I was getting oysters out of Morro Bay, but the ones we have now are from Carlsbad. We try to support the local aspect, more than most of our competitors.”

Many customers are also looking for seafood that is ecologically sensible. One of the barriers to this is that most of us grew up eating tuna and other fish that are now critically endangered, and we don’t know which alternatives are still breeding faster than they are caught. A conversation at the counter is recommended for those who are concerned.

“We try to interact with our customers and explain that if they like this or that fish, they might enjoy another that is more sustainable. Spanish mackerel are fantastic, and they replenish themselves very quickly. Mahi mahi are a great choice, and that fishery is sustainable – they are fast growing and well managed. Governments are getting wise about conserving the breeding stocks, and so are fishermen. In New Zealand the fishermen decided to put restrictions on the orange roughy, because the fish lives to be 80 or 90 years old and doesn’t start breeding until it’s 30 to 35. I’ve been fortunate enough to be over there several times working with them, and I love their practices. The same thing is happening in Alaska. The Alaskan fishery has put restrictions on the catch there so it’s a sustainable resource.”

Some fish that are recommended may be frozen rather than fresh, which may seem questionable to people who don’t understand the ways that technology has changed in the last few decades.

“Frozen fish has improved a hundredfold since the ‘70s and ‘80s. Back then, it was put on a sheet pan and thrown into a freezer, and the freezers weren’t cold enough, they didn’t freeze fast enough. There is water in each cell that expands during a slow freeze, so when you thaw that fish it is mushy, but if you freeze it fast enough it doesn’t have a chance to do that. When you thaw it out it will look like a fresh filet, and the flavor will be just like fresh. The texture is just a bit different, it’s more brittle and likely to crack if you don’t handle it right. But if you know what you’re doing it’s excellent. It’s worth learning those skills if you like certain fish. In some seasons wild salmon isn’t available – they typically close the fishery from October through May. There are a few exceptions from tribal fisheries, but that usually stays in the Pacific Northwest. If you want salmon during the winter months, it’s going to be frozen or farm raised.”

The Great American International Seafood Market also stocks canned fish, a product most Americans think of only in terms of tuna salads at picnics and anchovies for pizzas. Aupperle combats sales resistance with one of the oldest strategies in the book.

“We’ve been known to open up a can so they can try before they buy. Most people only know anchovies from pizza and have no idea how good they can be. Here are white anchovies by Agostino Recca, and they’re delicious all by themselves. We have them wrapped around capers, marinated with chili flakes, and all sorts of other preparations. The flavors are used subtly and it’s like adding nutmeg to something – you only use a little, but if it’s missing you notice it. Then we have the sweet ones, like these in vinegar and oil. They taste nothing like the ones you put on a pizza. We have canned mackerel too, and that’s a misunderstood fish. Many people first try a Pacific blue mackerel that is really fishy, and that turns them off. You get into these East Coast or French mackerel and they’re very different animals. The flavor is mild, the texture is meaty and dense, and they’re perfect for appetizers or right out of the tin as a snack.”

Aupperle and his staff try to sample everything in their stock, and sometimes discover wonderful products that haven’t caught on yet. When asked what he loves to eat that doesn’t sell very fast, he has an immediate answer.

“We have frozen breaded oysters out of Korea, and they make a perfect po-boy sandwich. All the work is done for you, you just have to fry it up. People are scared of oysters, they think they’re slimy. You take a raw oyster and you grill it and it takes on a whole new dimension. It gets creamy and delicate, and it builds a structure. Same with mussels – I wish more people would eat them.”

Whether you’re a cautious consumer who stops in for what you’ve always enjoyed or a culinary adventurer, there’s something at the Great American International Seafood Market for you. The Hill’s newest specialty store has developed a fervent following in a short time by bringing the delights of the deep to Palos Verdes, and it seems fitting that you have a nice ocean view from their parking lot.