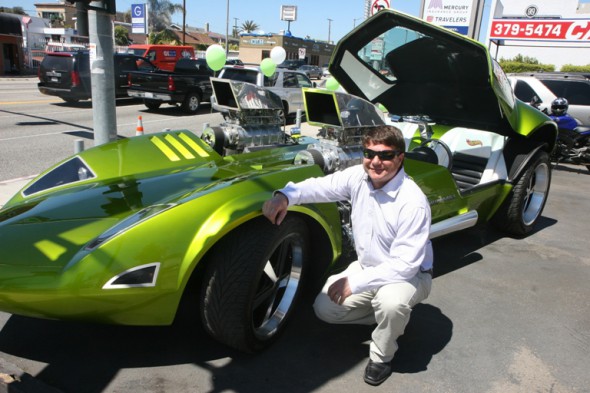 That’s right, Mattel’s offer to sell the first of only three fully functioning, road-sized versions of its popular toy cars was an April Fool’s Day joke. But the chance to see the car brought Hot Wheel and auto enthusiasts in streams to the Pacific Coast Highway dealership, thanks in large part to Mattel’s Facebook postings.

One man contacted Casey’s from New Jersey to offer $1 million for the twin-engine beauty (whether he was counter-April fooling was not clear, but Hot Wheels collectors have paid as much as $72,000 for a single toy).

Mattel has produced millions of Twin Mill toys since 1969, and spent six years building the big one, which is street legal as a custom car, and sports about one-third more horsepower than a NASCAR auto, said Chris Bouman, senior marketing manager for the El Segundo-based company.

After the big Twin Mill was completed, Mattel built full-size, fully functioning version of its Deora II and Bone Shaker cars as well.

Mattel began showing the full-sized Twin Mill in 2001. Racing star Danica Patrick has driven the car in a commercial advertisement, and Bouman has driven it around the Indianapolis Motor Speedway in conjunction with the Indy 500.

The Twin Mill features twin blowers for its engines, and a Bell Helicopter starter to provide electricity sufficient for the engines. The car’s color is “antifreeze green.” ER