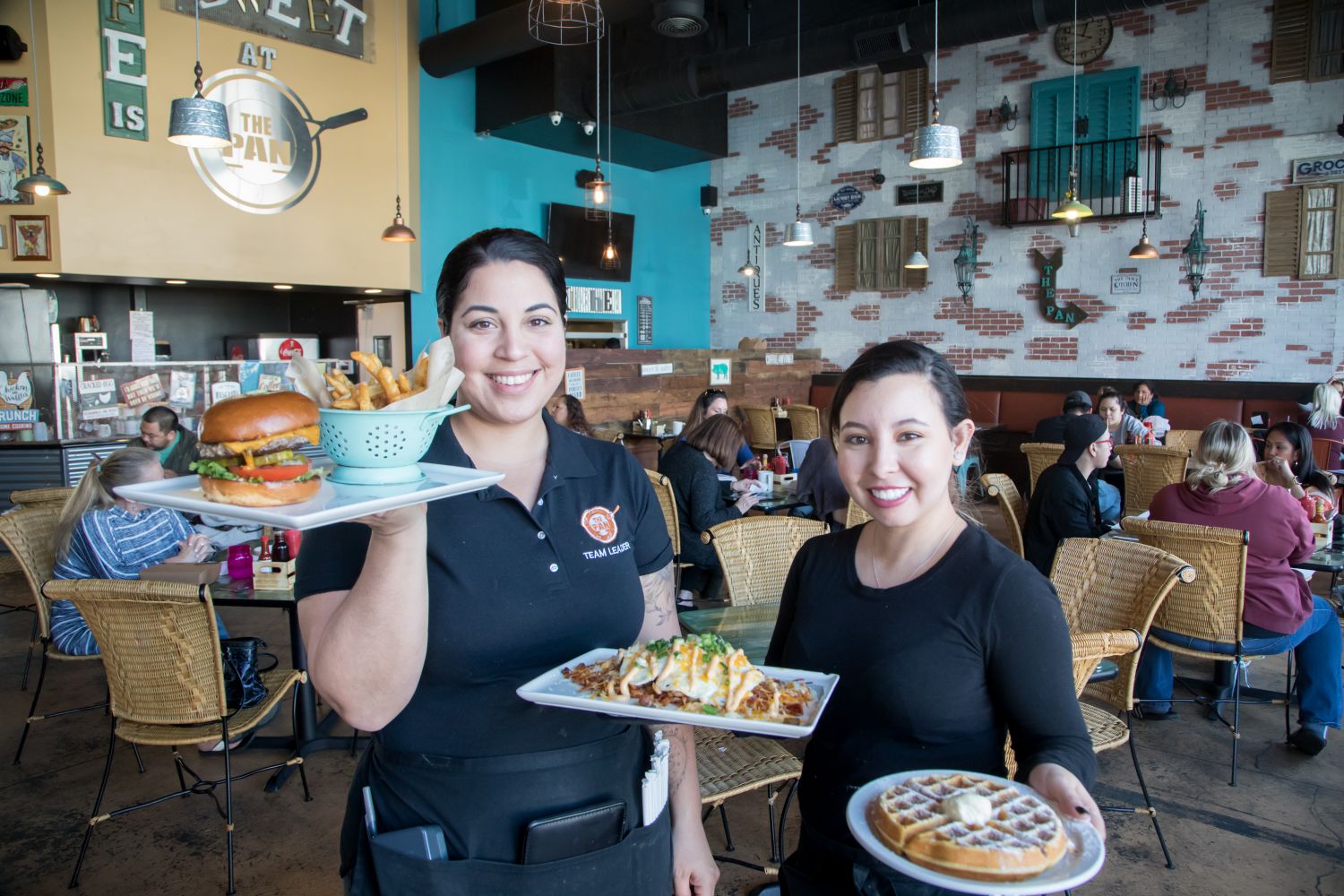 I tend to be wary of restaurants people describe as “fun.” That description is often given to places that encourage boisterous behavior by children, or by adults who have had enough alcohol to reduce their impulse control to the same level as children. I went to plenty of those places specializing in pizza and video games when my children were at the age when that sounds like heaven, and have had enough of them for a lifetime.

Occasionally something happens to remind me that fun is in the eye, mind, or even the palate of the beholder. The most recent instance of this was a pair of visits to a restaurant in Torrance called The Pan. Until recently this location was a beer and barbecue joint with dull décor and food to match. I happened to hear that a small chain that started in Gardena had taken over and livened the place up, so decided to stop in to see what was going on.

The change was startling, beginning with the whimsical and jokey Americana that decorated the now brightly colored walls. What had been a beer-oriented bar in the back now had a tiki theme, with glasses in the shape of colorful parrots and Polynesian heads. A statue of a dog dressed as a world war one aviator impassively surveyed the dining room. The place now had a hokey charm, and when we looked at the menu, we found items that were just as whimsical. Who, we wondered, had come up with the idea of recreating an all-American cheeseburger on top of a pizza crust, and what could guava and cream pancakes possibly taste like? 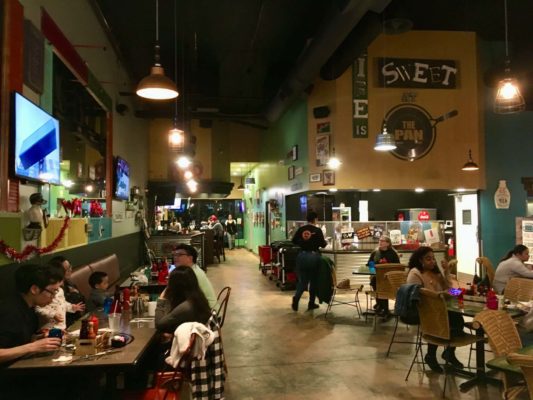 The interior of The Pan in Torrance. Photo by Richard Foss

There is a distinct Southern roadhouse feel to the place, and on our first visit we decided to try some of the items that fit that theme. That didn’t apply to the Caesar salad, but it did to a plate of shrimp and grits and another entrée of fried chicken with spinach and country gravy over a corncake. The Caesar had a nice dressing with a gentle garlic and anchovy flavor, but was marred by an exuberant hand with the croutons – the salad was about half toast, by volume. I might order another salad here but would tell them to lay off the bread, because there are better ways to spend your carb allowance here.

That includes the other two items we ordered. They were remarkably authentic to real Louisiana flavors. The grits were a classic well executed, the corn-flavored mush topped with large shrimp and discs of sausage in a creamy, spicy gravy with bell peppers, onion, celery, chopped scallions, and a shot of red pepper and herbs. To say I was surprised by how well these were done is an understatement, because I really didn’t expect anything like this depth of flavor in a restaurant that wasn’t Louisiana-themed.

The chicken was even more of a surprise, because it had flavors that were literally layered. At the bottom was a corn pancake, topped with successive layers of garlic mashed potatoes and gravy, sauteed spinach with onions, a delicately peppery red gravy, and a large boneless chicken breast that had been coated with seasoned batter and fried. There was some red pepper aioli on the side, but I couldn’t think of a use for it because everything was so good just as it was. 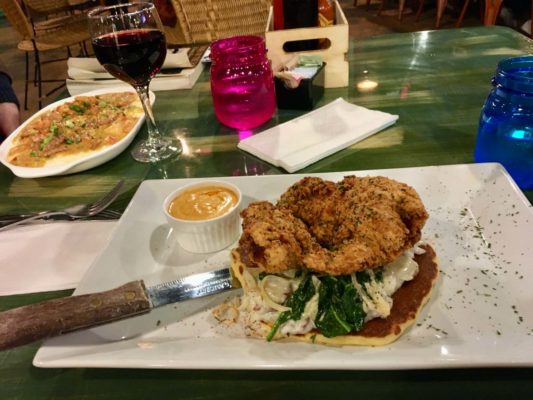 The chicken and corncake, with shrimp and grits in the background. Photo by Richard Foss.

We didn’t even investigate dessert in a cursory way, because the portions had been generous and we were stuffed. Dinner for two with two glasses of wine went 60 bucks, and we were excited enough about it that we brought family members for a return visit almost immediately.

On this trip we started with a Greek salad and some wings, half of the latter with a barbecue sauce and half with what was described as a tangy garlic sauce. The Greek salad was just what a Greek salad is supposed to be, the wings the only disappointment of either visit because both sauces were slightly bland. Given how exuberant the shrimp and grits had been, I expected something called a tangy garlic sauce to really take my mouth for a ride. Instead this was rather more mild than wild.

Things got more interesting with a pizza that was half American cheeseburger and half Cuban sandwich, shrimp pasta with creamy tomato basil pesto, an order of blackened salmon with potatoes and spinach, and one of their signature items, their “original” loaded hash browns. That last is a breakfast item, but The Pan serves breakfast all day, and people around us were enjoying pancakes for dinner. Since there had been a light, fluffy corncake under chicken on the previous visit, I was curious about the breakfasts myself, so we resolved to order the pineapple upside down pancakes or bananas Foster french toast for dessert.

I had some trouble deciding whether to order the “American hamburger” pizza or the Cuban sandwich version topped with mustard, mayo, pickles, ham, pastrami, and roast pork, so I was delighted when our server suggested one that was 50/50. We picked the medium size, which turned out to be twelve inches across and so loaded with toppings that it was a meal for at least two. The cheeseburger side had cheese, ground beef, tomato, lettuce, and drizzles of that burger sauce that isn’t quite thousand island dressing but is close, and it really was like a fast food hamburger on a crust. It was a novelty, but a really fun one, and everybody at the table had to try it. I slightly preferred the Cuban sandwich side, because I don’t really like American fast food hamburgers all that much, but I’m glad I tried it.

The shrimp pasta didn’t have any particular innovation but was well made with a creamy garlic pesto sauce, and I liked it but preferred the blackened salmon. The seasoning on the big portion of fish was only moderately spicy, but the roasted poblano cream sauce that topped it added another dimension of flavor. Someone here really knows how to cook fish, and the fact that a full plate with potatoes and spinach runs only $18 makes it a remarkable deal as well as a remarkable meal.

The loaded hash browns were a guilty pleasure, a mass of shredded fried potatoes topped with bacon, sausage, two eggs, green onions, jack and cheddar cheese along with some chili aioli. With the exception of the chili aioli it’s the kind of meal that anybody could knock together in their kitchen when they want a gigantic, filling breakfast, but it’s more trouble to do that than most of us will actually bother with. This is not on anybody’s diet plan, but it’s the kind of thing you allow yourself if you’ve been good and hope that you will work off later.

To accompany this dinner, we decided to try some of the tiki drinks — a “shrunken head,” mai tai, and a “tiki galore.” These were made using fresh juices and mid-shelf liquors, and were reasonably priced at below 10 bucks.

At the end of our meal we all looked at each other and almost simultaneously announced that we were too full for dessert, as much as we had been looking forward to it. We’re just going to have to come back again, and this time have dessert first. That’s the kind of thing you do when you’re out with friends and looking for fun, and this is a good place to find it.