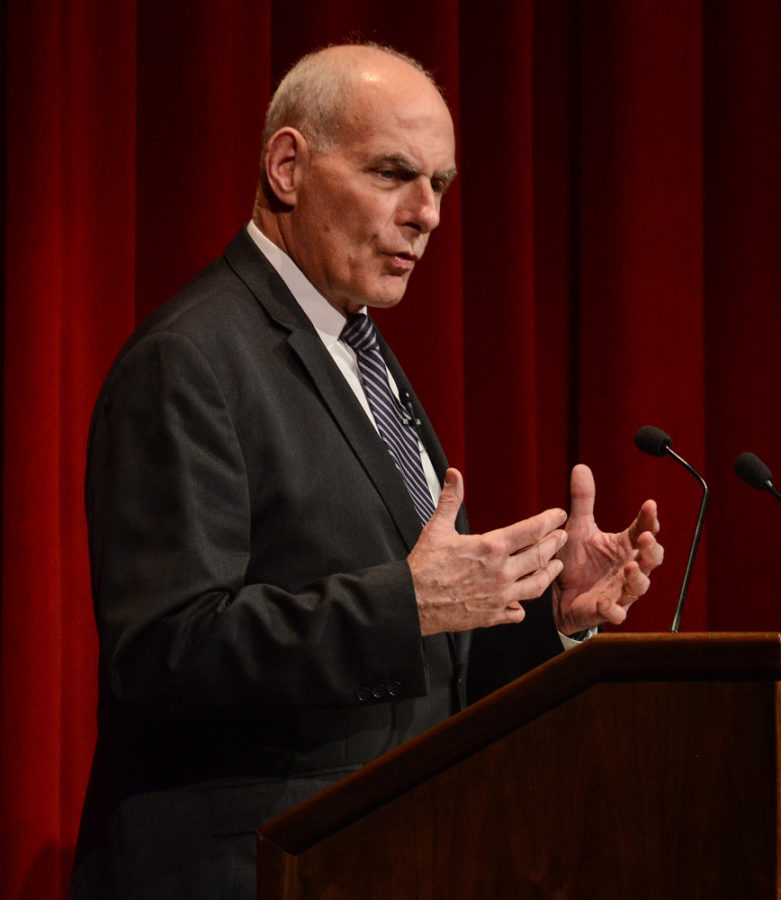 Kelly served as Trump’s chief of staff from July 2017 until Dec. 2018, when the president told reporters, “John Kelly will be leaving – I don’t know if I can say ‘retiring.’”

But audience members hopeful Kelly would share his opinions about the president were left to read between the lines of his stories about his 17 months in the Oval Office. The stories elicited frequent laughter and occasional sighs, beginning with the first two.

“Let me begin by dealing up front with the two questions I am most commonly asked. Why did I enlist in the Marines and stay for 45 years? And how did I get involved in the Trump lash-up.”

“In my part of Boston, a working class neighborhood, you were expected to serve in the military. All of our men had served in World War II or in the Korean War,” he said.

His two sons carried on the tradition. Kelly’s oldest son Robert, a Marine First Lieutenant, died in 2010 after stepping on a landmine in Afghanistan, during his third combat tour. Kelly’s second John Jr. is a Marine Corp Lieutenant Colonel. His daughter Kathleen’s husband lost a leg in combat in Afghanistan.

Kelly volunteered for the draft when he turned 18, in 1970, at the height of the anti Vietnam War protests.

The medical examiner at his draft board told him, “I have good news. You are medically disqualified,” he recalled.

‘He said, “If your [poor] eye sight didn’t disqualify you, your bone spurs would.”

Kelly’s account of how he became Trump’s chief of staff elicited similar laughter, but also sighs.

Kelly said he and his wife were watching a college football game when President Trump’s chief of staff Reince Priebus called to say he was leaving and Trump wanted Kelly to be his new chief of staff. Kelly had been named Homeland Security Secretary just a few months earlier, and liked that position, he recalled.

“I told Priebus I needed a few days to think about it. Ten minutes later Trump had tweeted I was it.”

“I am pleased to inform you that I have just named General/Secretary John F. Kelly as White House Chief of Staff. He is a great American….” the July 2017 tweet read.

Among Kelly’s first efforts as chief of staff was to rein in the President’s tweets. 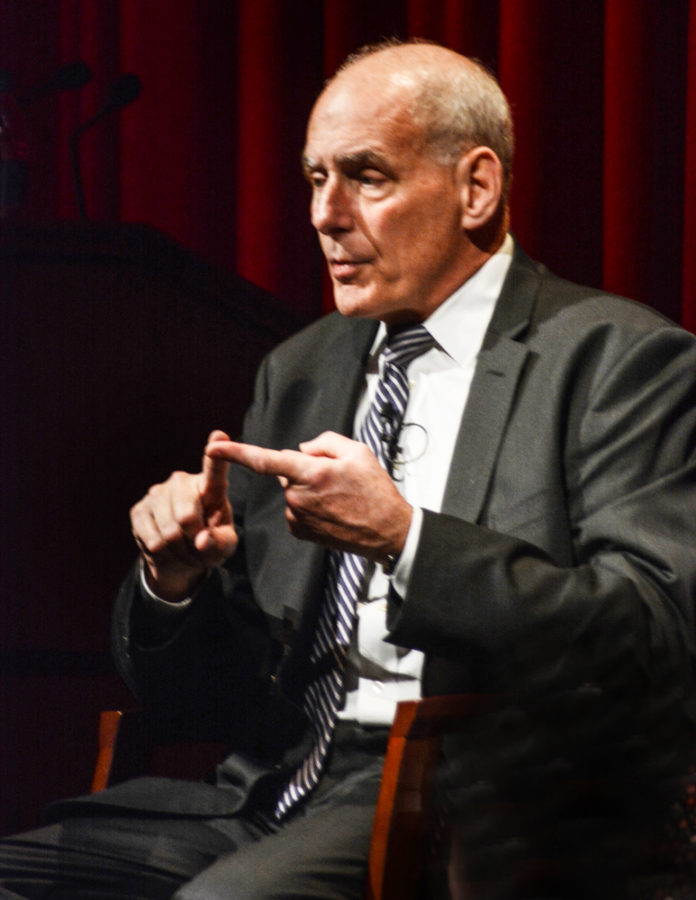 “I’d watch CNN and Fox and read the Wall Street Journal, the New York Times, the Washington Post, Politico and a website I had not previously heard of called Breitbart [which describes itself as the Huffington Post of the right].”

“At 4:30 a.m. I would be driven to the White House for an hour and a half intelligence briefing by the CIA. Those were scary beyond belief. My only consolation was knowing we have a great F.B.I., great local law enforcement, a great C.I.A and a great military.

“At 6 a.m. I’d watch Fox because I knew he [the President] was watching and when he came downstairs, he’d ask, ‘Can you believe what they said?”

“At 8 a.m. the staff came in and when the President arrived, I would be in the Oval Office.

“The work was bone crushing. I was used to long hours from my work in the military, but not with this level of responsibility. There are no small issues. Every decision impacts every citizen.”

“I loved being a Marine so much that I felt bad taking the money. At the Whitehouse I earned every penny,” he said, to more laughter.

One of the biggest challenges he said he faced as chief of staff was changing the White House culture.

“Military people are selfless. It is about the team, not political ambition. At the White House, it wasn’t quite that way. It caught me off guard.”

“We had a lot of think tank academics with no leadership experience. I felt like I was running a counseling service. I’d tell people you have a reputation for yelling at subordinates. They’d say, ‘I do?’”

“Family members should never be allowed to work in the White House. Not because they are bad people, but because staff knew the family had a direct line to the president and didn’t know how to deal with that,” Kelly said.

To put a stop to staff wandering into the Oval Office uninvited, he said, he told the staff, including Trump family members, “go through me or turn in your [White House] badges.”

Kelly said he succeeded in changing the culture. “It turned around. People were no longer afraid of being fired.”

But he conceded, he left the White House “disappointed in myself. I had never left a job unfinished.”

“Going out the door, I told the president, ‘Don’t replace me with a yes man. But I knew he would. And the country is paying the price. With the systems I had in place Ukraine would not have happened.”

“I teach how Washington D. C. works and about the frustration that comes when the White House changes the military’s plans.”

One lesson he teaches, he said, is, “No military plan survives the first 15 minutes. Once it [the fighting] starts, do what you want.”

“The President says he will end the ‘endless wars, we are going home.’”

“They [Middle Eastern extremists] hate us. So it will go on a long time. It’s better to fight over there than to build a wall. The Kurds lost 11,000 in defeating the ISIS Caliphate in Syria. We lost 10 service personnel.”

Kelly ended his talk by discussing the qualities required of a good president.

“People ask me, ‘Is Trump qualified to be president?’ No, he is not. No one is. But most presidents know they are not qualified, that they need to listen to people who know more than they do.”

“President Reagan and House Speaker Tip O’Neill disagreed on almost everything. But they met once a week for lunch.”

“I wish Trump was more inclusive, less divisive. But he is who he is.”

In the upcoming presidential election, he advised, “Look for a person of character and integrity, who will do what is good for America.” ER