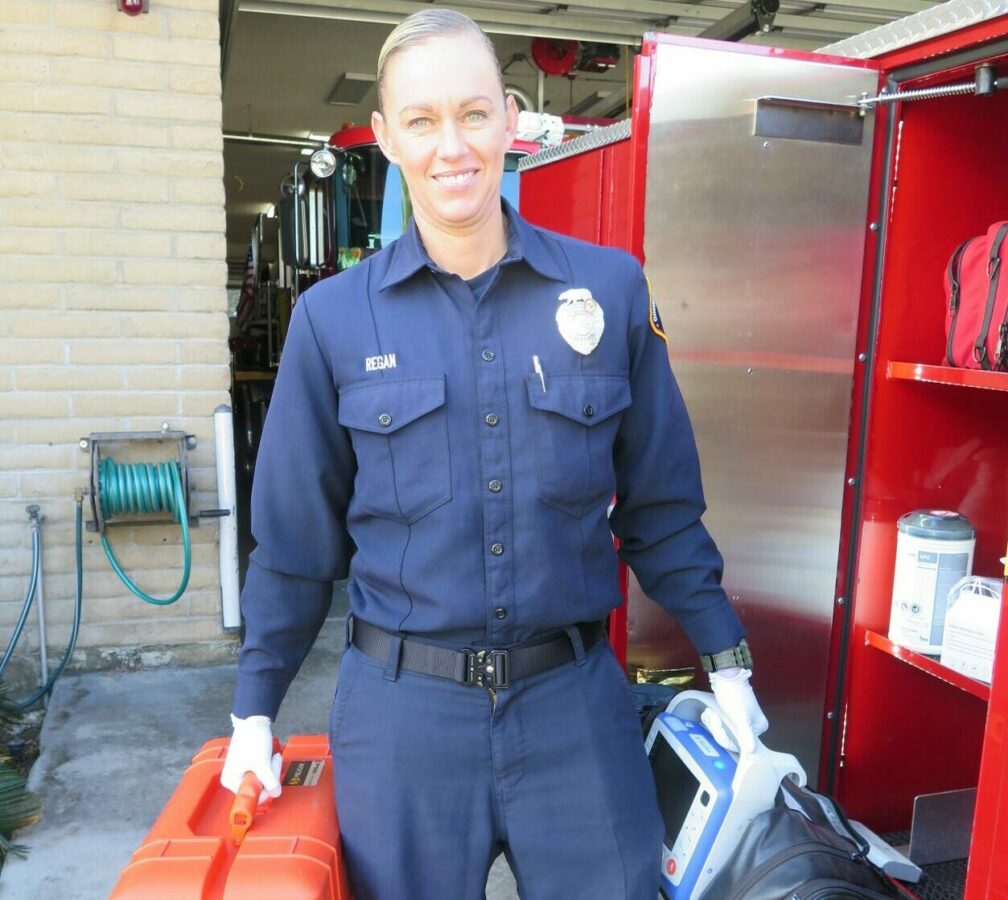 After Tiger Woods crashed his SUV traveling 85 mph down Hawthorne Boulevard last year,  firefighters from Rolling Hills Estates Fire Station 106 were credited with saving his life. They smashed the SUV’s windshield with an ax to quickly free him.

Erin Regan, was among the firefighters who pulled Woods from the car, and carried him to a gurney.

“He was no different than any other patient,” Regan recalled.

And Regan sees herself as no different from any other firefighter, except that she is one of just 79 females among the 3,400 firefighters with the Los Angeles County Fire Department. 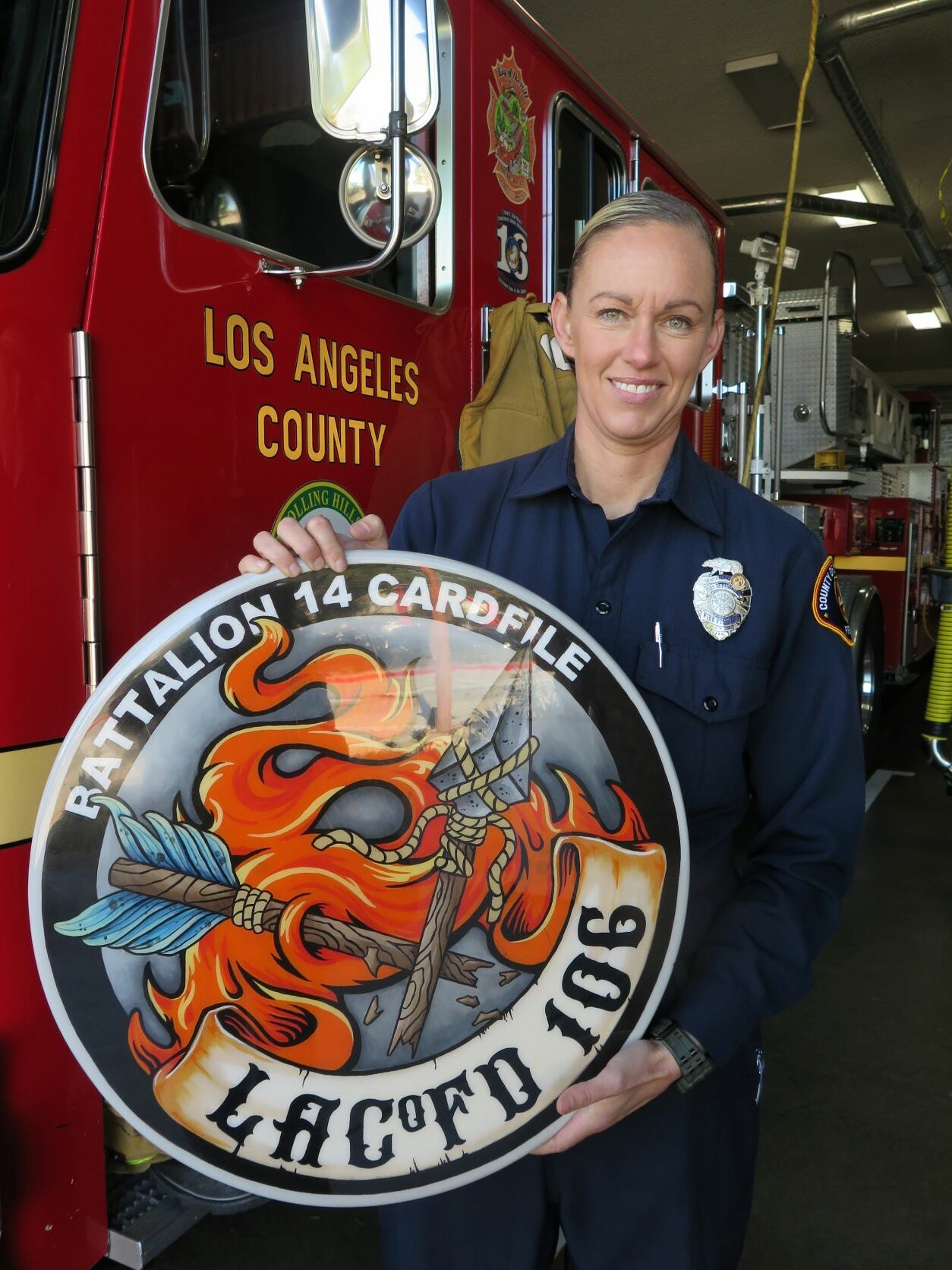 Regan, a 15-year veteran of the department, has made it her mission to see the number of female firefighters rise above that two percent number.

“It’s important to have women participating in this great career where you get to serve others and be a hero,” Regan said.

“I’m consistently surprised by how many women are like ‘Whoa!’ When they see me in the supermarket in fire gear and ask, ‘They let you do that?’” she said.

Regan never saw or heard of a female firefighter while growing up in Orange County. She majored in art and graphic design at Wake Forest University in North Carolina, and played soccer for the college team. After graduating, she became a professional soccer player – a goalie with the Washington Freedom team, of the  Women’s United Soccer Association, the country’s first women’s professional league. Fellow players included future Olympic gold medalists Mia Hamm, who now lives in Manhattan Beach, and Abby Wambach, who now lives in Hermosa Beach. After three seasons, the league folded because of financial reasons.

“At that time, I had to make a decision, do I want to chase this soccer thing or am I going to get a real job,” Regan said.

The then 24-year-old returned to Southern California and accepted an entry level job as a claims adjustor for the state Compensation Insurance Fund. Athletic and competitive, she knew she didn’t want to spend the rest of her life in a cubicle, so when her uncle encouraged her to become a firefighter, she took him up on it.

Public service ran in the family. Her mother was a police dispatcher, and her maternal grandmother was one of the first female police officers for the La Palma Police Department.

“My grandmother was required to wear a skirt and heels, and carry her gun in her handbag,” Regan said.

The women on the force were routinely subjected to harassment from fellow officers, Regan said. Commanding officers sometimes refused to send backup for the women.

“Nevertheless, she persisted,” she said. “I think a fair amount of fight runs in the family.”

Regan persisted as well. In 2007, she was invited to attend the Los Angeles County Fire Academy in Pomona. There she endured a grueling training regimen, pulling hose, climbing stairs, throwing ladders, and operating chain saws. 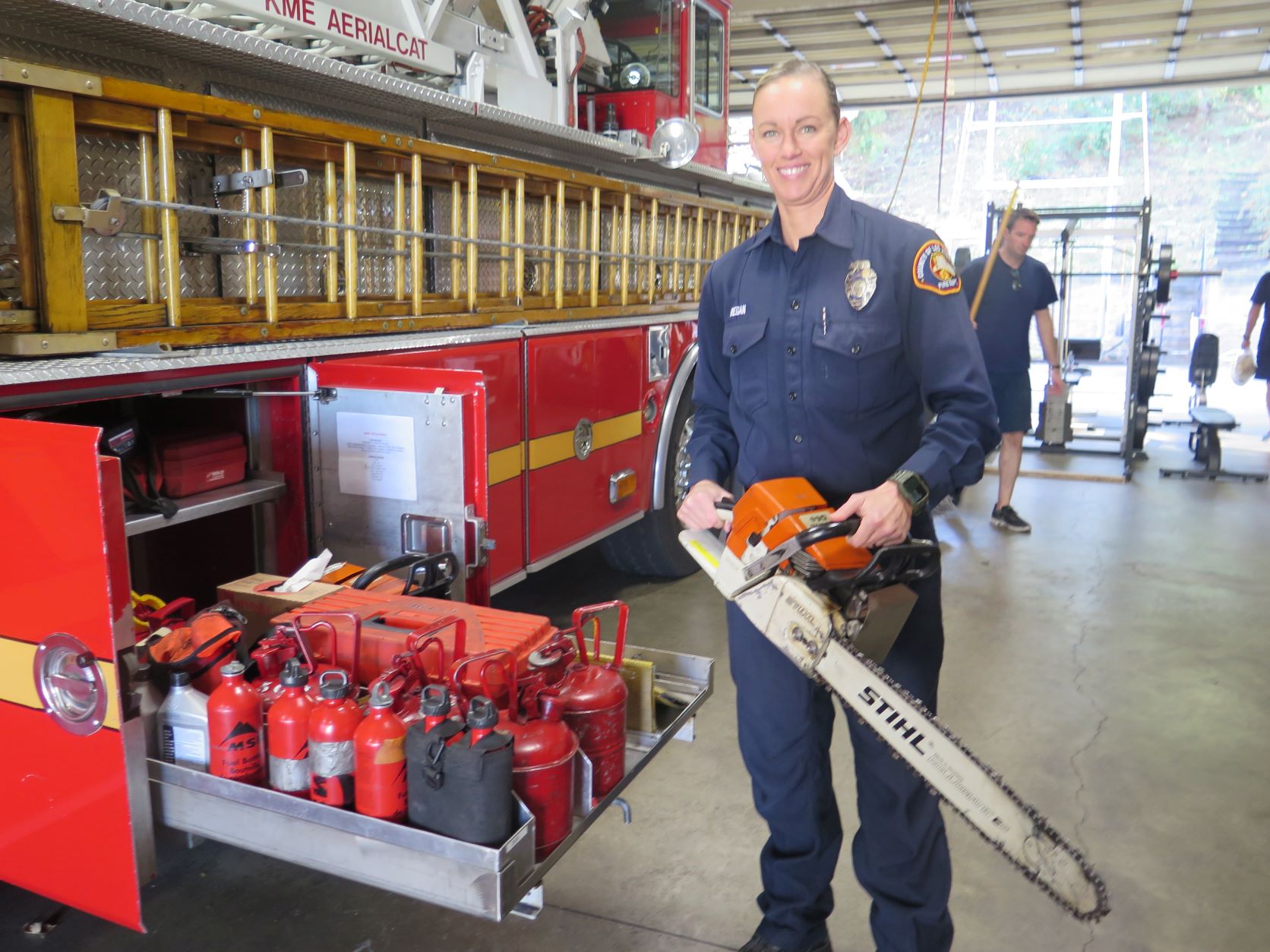 Erin Regan holds a chainsaw used to cut holes in the roofs of burning buildings.

She was one of four women in a training class of 44, the most females that had ever been in a county fire academy class. Despite their small numbers, the women trainees were treated the same as the men.

“The guys treated me as an equal because they knew I had to work as hard as they did to get there,” Regan said.

She passed the EMT course, fire combat physical course, and a written test to become a firefighter in January 2008. She added paramedic to her job title in 2011.

Regan worked at stations throughout the county, sometimes handling 20 calls a day, everything from traffic accidents to shootings, stabbings, and strokes. She loved the work but was equally passionate about introducing more women to the force. So she and other female colleagues created the Girls Fire Camp, a program that gives girls ages 8 to 18 the opportunity to shadow professional firefighters. The girls wear fire gear, learn about the equipment, and partake in the rigorous workouts.

Sydney Gagnier of Agoura Hills attended the camp and shadowed Regan on her paramedic runs.  She considers her a role model and mentor.

“I was impressed with her dedication, drive and discipline, both mentally and physically,” said Gagnier, who went on to become an LA County firefighter.

Regan also helped launch the Women’s Fire Prep Academy, a six-to-eight-week course to prepare recruits for firefighter tests. During the training, Regan gives the women the straight talk about what they can expect from some of their male colleagues who may not be thrilled to have women among their ranks.

“I tell them ‘No one wants you here. You have to create that space for yourself,’” she said.

Regan also shares her experiences as a mom who works 24-hour shifts 10 to 16 days a month, and is often called to fight California wildfires.

“Sometimes you’re here for Thanksgiving and Christmas, so the family comes to the station,” she said. There’s also the reality of sharing a fire house with mostly men. In the Rolling Hills Estates station, each firefighter has a room with a bed and closet, but many stations are dormitory style.

All of it is manageable if you’re passionate about the job, Regan said.

“I’m living proof that you can be a girl and have all the things that girls have,” Regan said. “And have a cool job where you get to help people.” Pen