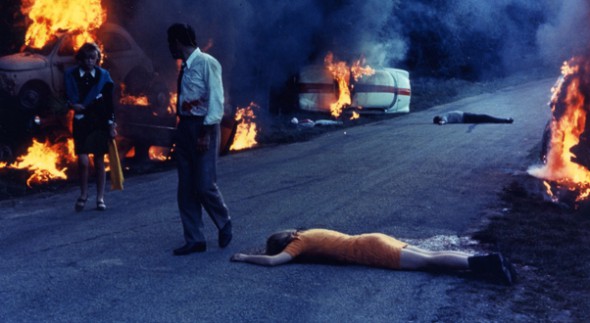 A newly restored and pristine print of the Jean-Luc Godard classic from 1968, “Weekend,” opens at the Nuart Theatre for one week beginning Friday, November 25. Godard, originally a writer for the iconic film criticism journal Cahiers du Cinema and a co-founder of the “New Wave” (along with fellow writers Claude Chabrol, François Truffaut, and others), is most famous for his feature film debut in 1959, “Breathless” starring Jean Paul Belmondo and Jean Seberg. By 1968 Godard had continued, some would say finished, the job he began with “Pierrot le Fou” (also starring Belmondo and also recently rereleased) where he deconstructed story as evidenced by his famous quote: “A story should have a beginning, middle, and an end… but not necessarily in that order.”

“Weekend” has a beginning, middle and an end, it’s just that each piece belongs to different films. An anarchist and/or a Marxist, or maybe he’s a Maoist, Godard has created performance art on film, veering madly (one could say maddeningly) from one idea to another. No one on the film is credited, not the actors, writers, cinematographer or director (a bit disingenuous since this is a Godard film). Further disorienting is the feeling that this film, full of movie references, is an in-joke between Godard and his fellow New Wave auteurs.

Corinne and Roland, portrayed by 60s poster child Mireille Darc and Chabrol favorite Jean Yanne, are each introduced discussing the permanent elimination of the other with his or her respective lover. For Corinne, she must eliminate Roland before she receives her inheritance from her dying father; for Roland, he must wait until after Corinne inherits. And it is thus that one of cinema’s more famous road trips to hell begins, for Corinne and Roland must spend the weekend visiting her father at the sanitarium where he is being treated for illnesses unknown… unknown, that is, to everyone but Corinne and Roland who have been slowly poisoning him at each visit. He can’t last much longer, they reason.

Climbing into their sports car, they are on their way to oblivion, for as soon as they hit the highway, and hit is the appropriate word, they encounter the world’s biggest traffic jam and, for cineaste’s, one of the longest tracking shots in cinema history – 10 minutes. Roland and Corinne, two of the most entitled petit Bourgeois you will ever encounter, impatiently pass other cars stuck at a standstill, zigzagging around the bloody human carnage strewn across the road and the surrounding fields. This is no ordinary gridlock; this is the apocalypse, evidence of which will become more and more apparent as time passes, and Corinne and Roland descend farther down the rabbit hole.

At various points they will be carjacked, they will be the carjackers, they will pick up hitch hikers, they will hitchhike themselves, and they will find themselves atop a garbage truck listening to diatribes against the imperialist crimes of France against Algeria and the U.S. against Viet Nam. Whether Corinne and Roland achieve their goals or even arrive at their destination, any destination, is beside the point as Godard has created a world in which the “old order” is being decimated by the “new order.”

“Weekend” represents the beginning of what could be called “guerilla filmmaking” where plot is secondary, tertiary or even non-existent to a philosophy of anarchy as expressed by the multitude of characters met along the road including St. Just, the Revolutionary father of the first post-Revolution constitution who was later beheaded with Robespierre, hilariously played in costume by Jean-Pierre Léaud, Truffaut’s alter-ego. Godard is intent on having his cake and eating it too. His hilarious heretics spouting anti-religious diatribe and nonsensical radical philosophy are juxtaposed against Godard’s own philosophical opinions on imperialism. “We have no right to burn even a philosopher,” says one of the characters tired of listening to the opinions of another.

A black comedy with horrifically hilarious scenes and filled with non sequiturs, the “philosophy” of “Weekend” is best expressed by one of its characters. “We’re all brothers as Marx said.” This might be true, but I prefer to think of the anarchic influence of the Marx Brothers rather than that of Karl Marx.

The significant weakness in “Weekend,” considered the last of Godard’s story-based films (and I would argue that he was well past that stage when he made this one) is that it is entirely self-indulgent (which can be either a good or bad thing) and overly long (which is never good). If his intent was to poke a finger in the eye of the middle classes, he could have accomplished it much better if he had cut at least 15 to 20 minutes from its length as the anarchic antics of the Yves St. Laurent-clad revolutionaries cavorting in the woods killing blood sucking materialists seems interminable. Never a proponent of “less is more,” Godard piles carcass, human and animal, upon carcass with his “more is never enough” philosophy. Judge for yourself. If you saw it in your reckless youth, see it again; if you’ve never seen it, then by all means go and see a film that influenced a generation of filmmakers and untethered them from traditional story, whether for good or ill.

Playing for one week at the Nuart Theatre in West L.A. beginning November 25.