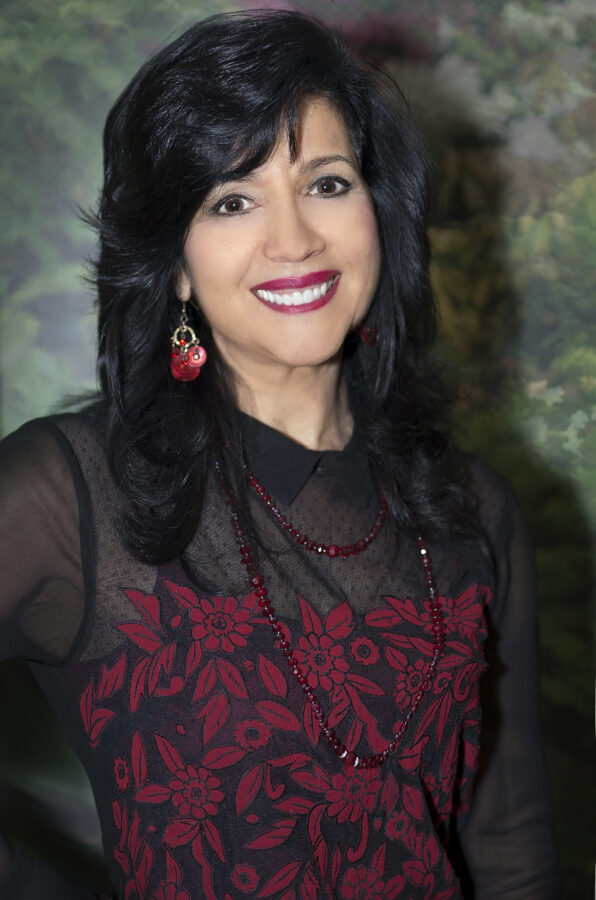 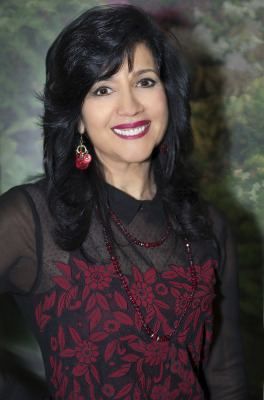 She’d accomplished more in the preceding week than most of us do in a month or maybe two.

Dr. Joanna Medawar Nachef, who’s been the artistic director for Los Cancioneros Master Chorale for well over two decades, had just returned from her native Lebanon and so far was suppressing any sign of exhaustion. Now she’s getting ready for the chorale’s annual holiday concert, which takes place this Sunday in Torrance.

“I was there to conduct the Lebanese Philharmonic,” Dr. Nachef says of her overseas trip. “I was conducting seven hours a day for three days,” and that included rehearsals with the orchestra and then the choir, a final dress rehearsal, the performance itself, plus interviews with the press and various functions with the American Embassy.

“A lot of people say, what kind of vitamins do you take? I don’t take any! I think I have been blessed with an inner drive, and a passion – the passion for what I do, for what I love.”

Surrounded by talent
Dr. Nachef came to the United States with her family in 1977, having been born and raised in Lebanon up through her teens. Although she’s now been in this country for some 38 years, she has and always will have one foot in her native land. She’s returned often, but still says, “I want to go back and share what I have had the opportunity to learn and experience in the United States.”

Her father, Michel Medawar, is a noted clockmaker and jeweler, and the family business has been prominent on the Palos Verdes Peninsula for 35 years. However, when the family left Lebanon because of the civil war they originally thought to settle in Switzerland – after all, clockmakers and Switzerland, what seems more natural? But upon visiting a relative who was residing here it became evident that the Alps would would have to be sacrificed for the California coastline.

One may ask how a clockmaker’s daughter developed such a passion for music, and I think we’ve got the answer right here”

“My mother is the musician,” Dr. Nachef says; “she is a glorious soprano – so the love of music came from her.” When Dr. Nachef’s parents married, her father gave her mother a piano.

“She always had a gorgeous voice,” Dr. Nachef continues. “And so, when she had me, she said she’d like to fulfill her dreams, as a musician, in me.” She smiles. “And I guess I was amiable and willing to do that.”

Bridging two nations
What do most of us know about Lebanon? Probably not much. Maybe the Cedars of Lebanon, which could be mistaken for a sports team, like the Angels of Anaheim.

“Unfortunately,” says Dr. Nachef, “all you hear about over the last 20-30 years is ‘war-torn Beirut,’ right?” Well, that’s true. “And terrorism – that has in many ways governed the discussion of Middle Easterners.”

Dr. Nachef, who is, by the way, a founding member of the L.A./Beirut Sister City Organization, is clearly a cultural ambassador, official or otherwise, between the U.S. and Lebanon.

“My mission has been, in the last couple of decades, to dissolve misconceptions, because we tend to stereotype people (based upon) what the media tends to emphasize – and that’s not often a very wise perception.”

Having been immersed in both cultures, Dr. Nachef says she feels an obligation to put her native land in an unfiltered light, and “to develop bridges of tolerance and understanding. The best way to do that is through music – people to people, educational and cultural exchanges.”

This she has endeavored to do, even if there have been obstacles and occasional setbacks – the Israeli-Hezbollah conflict of a few years ago and Islamic State terrorism today, the latter like some virulent strain of an already fatal disease.

In 2009, Dr. Nachef took a sabbatical from El Camino College, where she’s been an instructor since 1989, and met with many composers and arrangers in Lebanon. Afterwards, she returned with a collection of Arabic choral music which she then “introduced to the repertoire of the Western World. Los Cancioneros gave a whole concert of this music, and I entitled it ‘East Meets West’; and so other choruses around the country are learning this music because it’s quite rich and poetic, and very melodious.”

She was also the driving force among those who arranged for the choir at the university in Beirut to come to Los Angeles. The welcoming celebration in downtown L.A. included then-councilman (now mayor) Eric Garcetti and other civic leaders. The El Camino choir sang the U.S. national anthem and the Lebanese choir sang the Lebanese national anthem, at an occasion that definitely made Dr. Nachef very proud.

“The students got to know each other,” she says. “In fact, my El Camino students did a fundraiser so they could take the Lebanese to Disneyland. And, to this day, we continue to do collaborations: They’ve come to New York, to Carnegie Hall, and sang with us.”

What’s behind, what’s ahead
Sunday’s “Christmas Celebrations” concert at the James Armstrong Theatre will include familiar works, but it’ll also look back over “23 years of our Christmases past,” Dr. Nachef says, “and I have chosen some of the highlights of these choral masterworks we have done.” There will be various Magnificats and Glorias, cantatas and oratorios, from the likes of Bach, Mozart, Handel, Vivaldi, Saint-Saëns, Puccini, and Rutter, as well as the group’s traditional sing-along.
In the new year, “Triumphs and Tragedies” takes place on March 22, and it will feature requiems and masses, highlighting selections from previous performances while also celebrating through music the memory of former choir members who have passed on – and who are now singing somewhere in a celestial choir. Los Cancioneros was founded in 1949, and thus many faces – and voices – have come and gone. 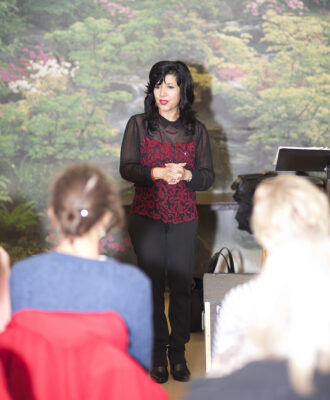 The last concert of the 2014-2015 season is set for June 14 and is called “Joanna’s Jubilee.” It will focus on American composers, those we know well – Copland, Bernstein, Gershwin – and maybe not so well – Hairston, Hogan, and Witberg.
“We’re opening it up to all former members to come back,” Dr. Nachef says, “and we hope to have a huge turnout.” It will also, she adds, “be my opportunity to introduce the new artistic director. The chorus is working on a search and hoping to hire somebody who will carry forth this heritage.”

The music continues
What that means is that this is Dr. Nachef’s last season heading up Los Cancioneros Master Chorale. She hands over her baton next spring.

“Close to a quarter of a century,” she says. “It’s really been a marvellous experience and I have enjoyed every season. I think we had some memorable moments with our journey, our concerts, our tours and collaborations. This group has become a part of my life; they are my friends. For me, I have always felt that this is home.

“I have also thought about what my life is going to be after retirement from El Camino and my journey as an academic professor. I’m hoping to develop my own professional group, which will have its residency in Palos Verdes at the Norris Theatre – with no interest in any conflict with Los Cancioneros. In fact, I’m going to be their supporter; I will hopefully collaborate with the group again, many times over, and just enjoy the memories that we’ve created together.”
This being her last season with Los Cancioneros, how long does Dr. Nachef think she’ll remain at El Camino College?

“I hope to be there for another five to seven years,” she replies. “Hopefully by the time my son graduates from college I would be able to focus on a traveling professional group. I’d like to take the group around the world and share music that way, because I believe we are ambassadors of harmony, using harmony as that bridge that connects people together.”

Far from least among Dr. Nachef’s accomplishments is that, in her words, “I’m the first woman from the Middle East to be a conductor.” When the young people she spoke with in Lebanon asked her what was the biggest obstacle that she’s had to overcome in her career, she told them that as a woman she had to work twice as hard to gain her male colleagues’ respect. In fields perceived as being the exclusive or near-exclusive domain of men this has, unfortunately, always been the case, and it’s even more so when the woman is young and attractive – and so I’m implying that maybe Dr. Nachef has had to work three times as hard.

Stepping out in front of the Lebanese Philharmonic she had to show them that she was equal to or better than any conductor they’d ever seen. It sounds like she astonished them. Part of her agenda, she says, when leading a group, is “to present excellence in the way we dress, the way we do our presentation – I talk to me audiences, and also allow them to be a part of what happens. So in Lebanon that was a big change for them.

“I want to entertain and educate,” Dr. Nachef continues, “but most of all I don’t want them to see me, I want them to see God in me – like Handel and Bach, who signed off ‘Soli Deo gloria,’ only for the love of God. And if God chooses to use me, I am just so grateful that I am an instrument in His hand. I will work on refining my talent and my gift so it can sound beautiful in His ears, and it will show that I am being used for His glory.”