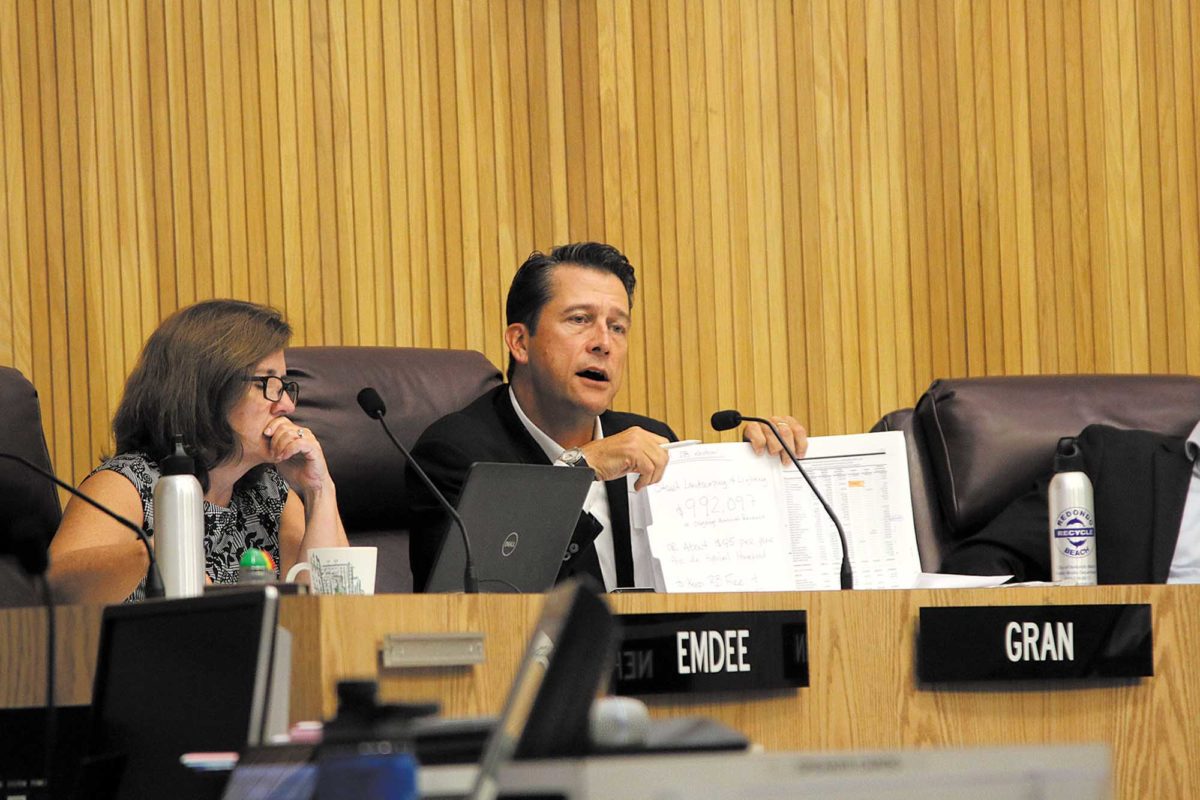 Redondo Beach Councilman John Gran explains why he did not vote for a Los Angeles County Fire Study at a 2019 City Council meeting. Photo by David Mendez

By the end of the day on Jan. 9, Redondo Beach Councilman John Gran will better know if he’ll face a recall election stemming, in part, from his decision against a study to switch from municipal fire services to contracting with the Los Angeles County Fire Department.

But Gran seems confident going into the final days, even knowing he’s facing a signature drive, backed by the Redondo Beach Firefighters Association, asking voters to consider removing him office.

“I’ve knocked on about 5,000-plus doors, spoken to people in 1,250 households, and about 2,500 voters,” Gran said on Monday. He’s spent that time asking his constituents in Redondo Beach’s District 4 to hear his side of the story — and, if they’ve signed the petition, to retract their signature.

Recall proponents have to get 25 percent of registered voters in Gran’s district to sign their petition for the recall election to take place, or approximately 2,344 signatures. Signatures are due to the County Recorder by the end of the day on Thursday, Jan. 9.

“I’m finding that the Fire Union has its reasons for wanting to go to LA County Fire. But when that becomes clear to residents, it’s wildly unpopular,” Gran said. “You put it in stark terms, that this is what’s going on, put rhetoric aside and people get angry.”

His plan has been to prove to residents that he’s not the bad guy that political mailers have made him out to be — that he’s a neighbor looking to improve the City, without interests in real estate or emergency services.

A mailer sent by RBFA on behalf of the recall effort calls him “Dishonest John,” and describes him as having “sinister motives” intended to benefit “his pro-developer donor base” and a “weak, self-serving Fire Chief.” The residents of Redondo, they argue, will suffer as the Fire Department takes a decline that going to County services may prevent.

Gran said he made his decision because proposals made by the County in an initial study would not add up to savings of at least $1.5 million annually, when factoring in legacy costs that City staff expects to retain.

The second phase of the County study, which the firefighters have offered to pay for, would not change the projected, ongoing costs — rather, it would assess one-time savings credited to the city for any equipment that would transfer to the County.

But the firefighters don’t believe the City’s numbers necessarily reflect what will actually happen, and their own projections don’t match up with those published by City Hall.

Further complicating matters, the City’s increasingly dire budget situation, caused largely by growing pension liabilities, has put City Hall and the firefighters on opposite sides of a contract divide. Last month, the City Council considered imposing terms on the firefighters, before killing the idea in a 1-4 vote.

“The City has proven that they are unwilling to solve these problems time and time again, which has led us to this situation we are currently in,” said RBFA President Kenny Campos. “This idea was brought to us by the city. Since the city has ignored the growing needs of this fire department, and unless the City and citizens are okay with a crumbling fire department, is there any other option?”

Gran said he’s spoken with Campos and others in RBFA leadership, and as an act of good faith, he stated at Tuesday’s City Council meeting that he will ask his colleagues to reopen contract negotiations with the firefighters.

When asked to respond, Gran said that he included it, alongside his personal phone number, as ways that he typically interacts with residents, and stated he doesn’t use City resources to provide residents with information for the recall, and that those questions are answered with a personal email account.