“What could be better than to sit in a glass-enclosed space looking at the sunset every night and then looking out at the moon?” 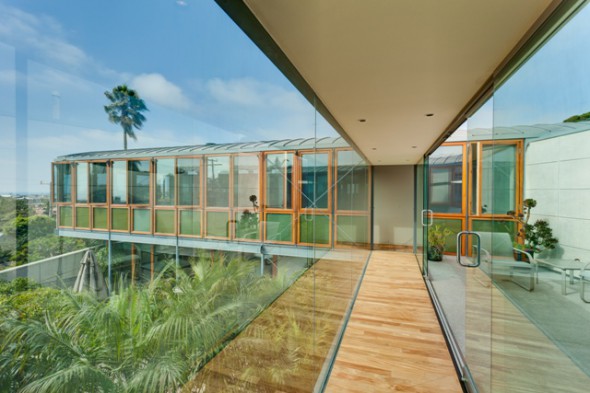 A glass-paneled walkway bridges the north and south wings. Photo by Scott Mayoral/MayoralPhoto.com

Floating elegantly over its sloping, corner lot in Manhattan Beach’s hill section, the Greco residence masterfully combines Modernist design rigor with quintessential California cool. Glass, steel and concrete team with teak and mahogany to create a breathtaking frame for the home’s light-soaked interiors and sweeping views of the Pacific Ocean.

Chicago-based architect Gerald Horn designed the residence, built in 1996, as “an adult home” for empty nesters and longtime Manhattan Beach locals Sharon and Don Greco. At the time, Horn, an Inglewood native and a childhood friend of Don’s, was working primarily on commercial projects for the prestigious firm Holabird & Root. He was a design partner there for 20 years. When the Grecos approached Horn about designing their home, it seemed like a long shot. Horn was in Chicago and hadn’t taken on a residential commission, except for own home, in several years.

“When he said he thought it was possible and could do it, I leapt at the chance,” Sharon said. “I was honored that he would do it.”

The linchpin in securing Horn as the project’s architect was a mutual love of mid-century Modernism, reflected not only in the home’s structure but also in the Grecos’ choice of furnishings. From the couple’s 1970s Cassina Cab Chair, which Sharon told Horn was her favorite, to their iconic pair of Eileen Gray chrome-and-glass side tables, with which Horn incidentally furnished his own office, it was clear to all parties that their design sensibilities were aligned.

“If you’re able to get a good client who likes your work, it’s perfect. And Sharon and Don were that. They happened to like what I was proposing,” says Horn. “We were thinking along the same path.” 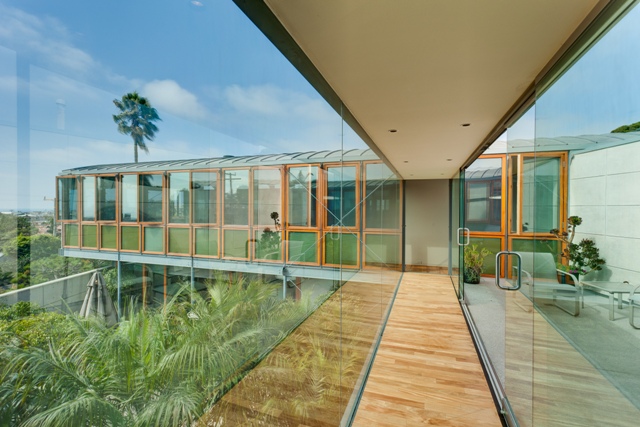 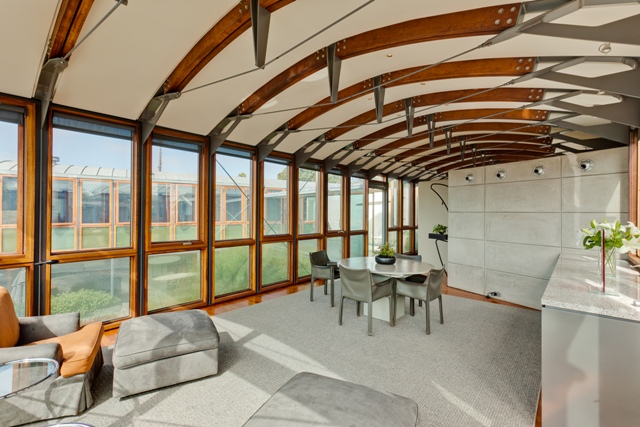 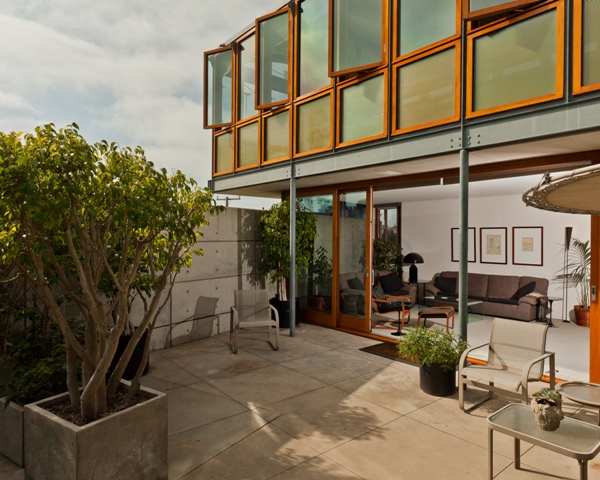 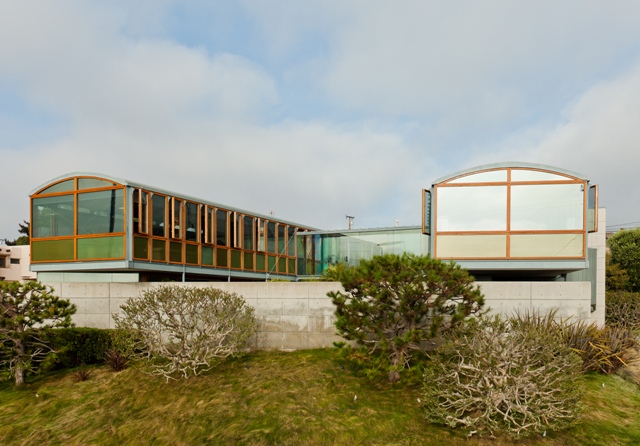 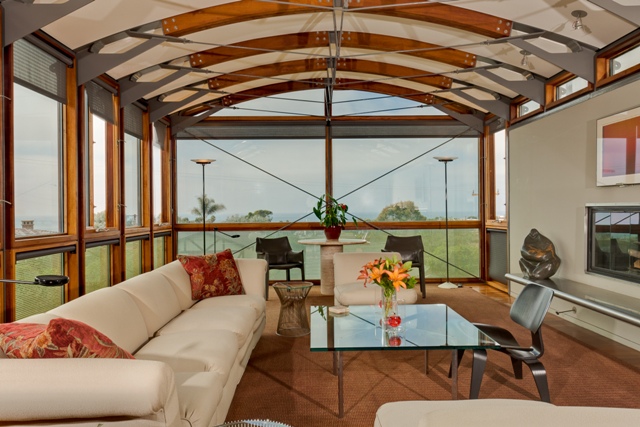 During Horn’s initial visit to the site, he identified the first order of business: maximizing the lot’s potential for panoramic ocean views. The existing home, a modest structure about four times smaller than the current 3,400-square-foot one, lacked any such vistas. To address this need, Horn came up with a two-winged plan that grouped the main living spaces on the second floor.

As Horn recalls, “Sharon and Don and I got up on top of the roof of [the old house] to see what the view was like. We wanted to have that view or better. We needed to get up high…So, I put the living spaces upstairs.”

He designed the Greco residence as a two-story structure with parallel north and south wings organized around an interior courtyard, screened from the street by a poured concrete wall that lines the western perimeter at ground level.

Horn began his career at Craig Ellwood Associates under that firm’s famed Angeleno modernist namesake. True to Ellwood’s California Modernist thrust, Horn’s design emphasizes indoor-outdoor living through open plan interiors and structural communication between inside and outside spaces. The concrete perimeter wall, for example, extends through the home’s interior, penetrating the steel and glass frame and continuing outdoors to line the courtyard before re-entering the interior of the facing wing.

At ground level, a den, a guest bedroom and Don’s office all open onto the courtyard, which serves as both an entertainment area and a shade garden. Sharon and Don, both avid gardeners, were keen to have as much nature and greenery as possible. Planted with Phoenix palms, fern, ficus, plumeria, and dozens of flowers from Sharon’s go-to nursery, Deep Roots, the Greco’s courtyard is a favorite place to relax. To that end, Don has even been known to bring his chair out into the courtyard and watch television in the den by looking back towards the interior.

On the home’s upper level, a glass-paneled walkway bridges the kitchen, dining room and reading area of the south wing to the living room and master bedroom of the north wing. The walkway opens onto a cozy, open-air deck, which Sharon says, Horn designed specifically for her husband. “That was kind of his gift to Don.”

Don couldn’t be more pleased with the view afforded by the walkway deck: “What could be better than to sit in a glass-enclosed space looking at the sunset every night and then looking out at the moon?”

The vast expanses of glass, set into the home’s steel and concrete frame, reinforce its interconnectedness with nature and lend it a certain airy feeling that Sharon has compared to living in a tree house.

“We are never disconnected from nature in this house,” she says. “When it rains, we’re in the rain. When it’s sunny, we’re in the sun…And that does change your life.”

Despite its unabashed openness to the elements, the Greco residence retains a strong sense of privacy due to Horn’s clever organization of the living spaces high above street level. This dual character of openness and privacy is just one of Horn’s artful balancing acts in the home’s overall design. Horn also manages to combine industrial elements and natural ones in a way that is simultaneously beautiful and functional.

Horn tempers his affinity for steel and concrete — structural nods to one of his major influences, Ludwig Mies van der Rohe — with the incorporation of wood elements on the home’s exterior and interior, which add considerable warmth to the look and feel of the house. Horn chose teak, a hardwood often associated with boat building, to accent the home’s exterior surfaces because of its durability and weather-resistant properties. On the interior, Horn succeeded in seamlessly integrating the glossy, mahogany floor and ceiling beam surfaces with the thin-gauge, laminated metal surfaces of the built-in cabinetry.

Upon the home’s completion, the American Institute of Architects recognized Horn’s accomplishment with the AIA Honor Award. The Greco’s made the trip to Chicago for the award ceremony.

In retrospect, Sharon says, “We never envisioned anything at all. It was totally just…a leap of faith. We knew he would do something beautiful.”