Greeks on the prairie [restaurant review]

A Mediterranean steakhouse inspires thoughts of a different Old West 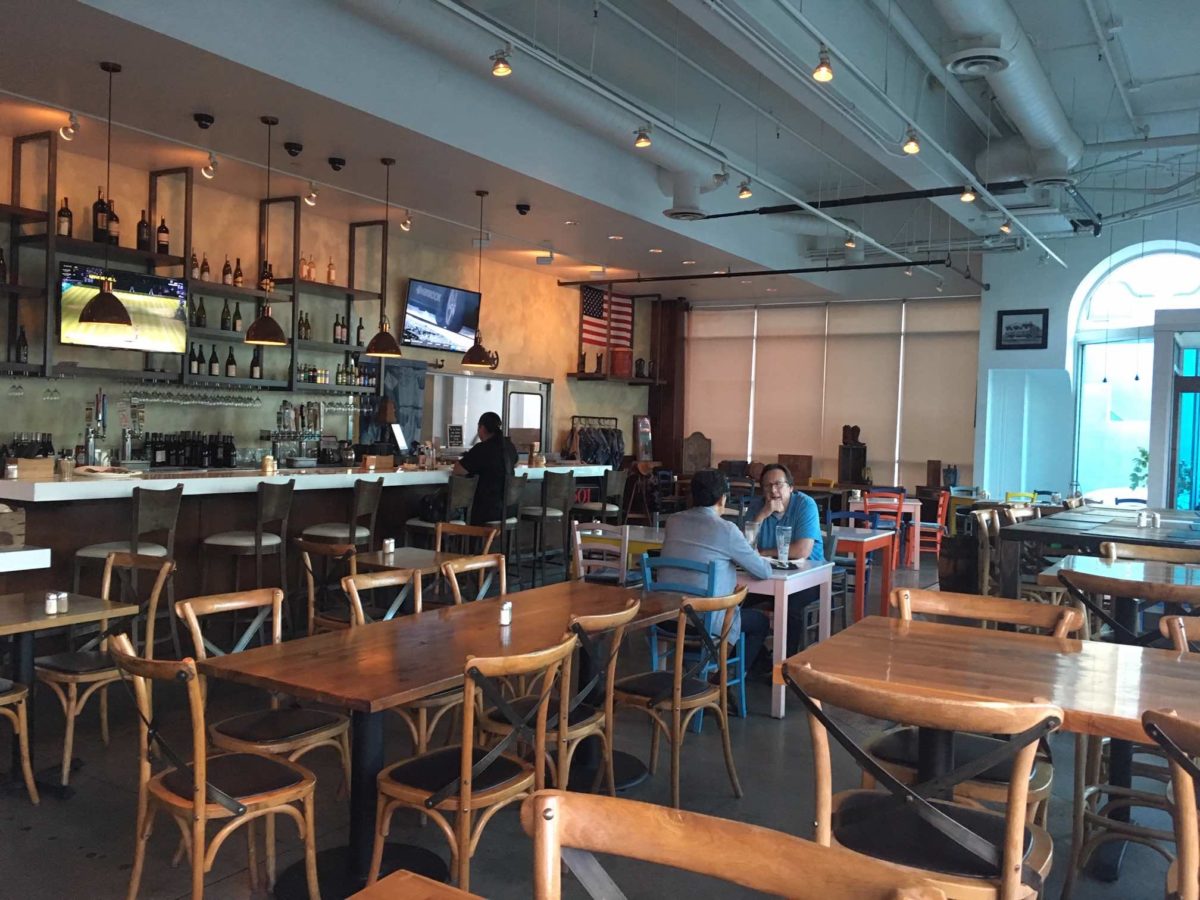 The interior of the El Segundo Chophouse. All photos by Richard Foss

Earlier this evening, I found myself imagining an alternate history where the American West was settled by Greeks rather than the motley crowd of Germans, Irish, French, Mexicans, and Spaniards. I imagine cowboys sitting around the fire drinking red wine with their bacon, beans, and steaks while meditatively reviewing the dialogs of Socrates. On particularly jolly evenings they could break out the ouzo and perform the comedies of Aristophanes as cattle lowed and coyotes yipped in the distance.

That vision was inspired by a meal at the El Segundo Chophouse, a restaurant that offers Greek food alongside steaks, ribs, and other American favorites. The place opened as Petros Kafe a few years ago, with the same menu as the very popular Manhattan Beach restaurant, but high style Hellenic cuisine didn’t catch on in El Segundo. Owner Petros Benekos is fascinated with Americana and spends vacations exploring the rural West, and he was inspired to change both the décor and the menu. Rustic high grain wooden tables and chairs replaced the sleek modern counterparts, the fancy floral arrangement on the counter was deep sixed, and a rack of vintage jeans arrived in one corner. (They’re for sale, Petros also owns a clothing store.) It wasn’t a complete transformation, but it did warm up the previously austere interior.

Many of the Greek favorites are still there. You can get the lemony avgolemono chicken soup, tzatziki sauce or a Greek salad with your steak or ribs, but on my trips to investigate the new menu I focused on the newer items. 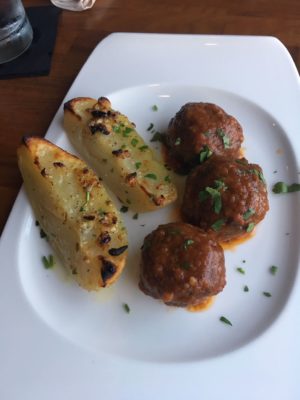 Meatballs with garlic potatoes at the El Segundo Chophouse.

There were two old favorites that I just had to have again, though. The spinach pie is subtly different from others because egg is mixed into the house-made phyllo dough, which makes the layers of pastry much more crisp. A dash of nutmeg and spice in the spinach filling adds depth to the flavor, and if you like Greek spinach pie this is the best you will find. Another item fits the new menu as well as the old, because meatballs in tomato sauce can be found on plenty of midwestern menus. These are exceptional because the coarsely ground meat is mixed with onions, parsley, and spices that seem to include a hint of cinnamon. The fresh tomato sauce adds to the flavor, and since some good garlicky roasted potatoes are included I’d happily order these as a light lunch.

One of the new items is a classic American salad, which is your basic romaine, tomato, and red onion along with bacon, avocado, feta, and ranch dressing. There’s nothing unusual here but the feta, but the time-honored formula still works. Another new item was a star of our meal, the “chophouse special dip” of four cheeses, pureed roasted eggplant and walnuts, hot peppers, oregano, and olive oil. The nuts and eggplant gave a hint of bitterness and nutty flavor to add depth to the unctuous cheese, and it was an unqualified success. We weren’t given quite enough of the hot house-made pita bread to finish the dip, but if you ask for more the servers will bring it. 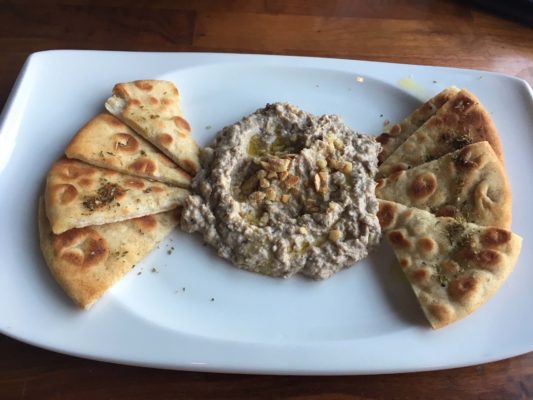 For mains we tried a ribeye steak, barbecued pork ribs, salmon, and a feta shrimp pasta, an item from the old menu that my wife had enjoyed so much that she had to have it. Italians generally sneer at having cheese and seafood together but the Greeks like it, and I’m with them in this instance.

The salmon was simple in concept, marinated with lemon and olive oil and grilled so the exterior was crisp. There’s nothing more to say than when this is done right it’s excellent, and so it was. It came with grilled vegetables that had a little too much bell pepper for our tastes, particularly because it was lightly cooked and the pepper flavor dominated. Next time I’d ask them to go easy on peppers or give it another minute or two on the grill. Otherwise, it was a fine meal.

We had the ribs on two different visits, and on one they were better than the other. They’re made in a Chicago style, in which the ribs are steamed at low heat for a few hours to make them almost fall off the bone tender, then coated with a honey sauce with just enough peppery spices to perk things up. On one visit, the ribs had been coated with the sauce and then broiled briefly, and on the most recent trip they hadn’t. This makes a big difference, because the broiling caramelizes the sauce, adding depth of flavor, and it also gives the meat a slightly crisp skin. Ask for yours to be given that time under the broiler if you like them the way they’re made in the upper Midwest. The ribs are served with either fries or a Caesar salad, and on successive visits we tried both. The Caesar is a standard well executed, and the big portion of fries hit the table hot and very crisp, so either is a win. 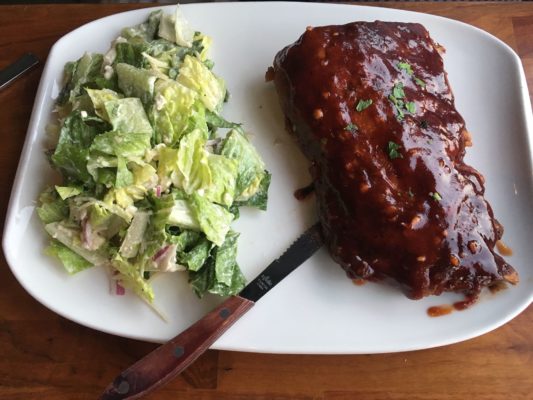 An order of Chicago-style ribs at El Segundo Chophouse.

The El Segundo Chophouse offers several steaks in eight-ounce portions, and we selected the ribeye that the menu noted is topped by sautéed cheese. This turned out to be Greek kefalotiri, the item usually used in the flaming saganaki appetizer that doesn’t melt when heated but remains firm. If you get this item you will not have to salt your steak, because kefalotiri is very salty all by itself. You don’t usually notice that because the lemon that is squeezed over saganaki mutes it, but that isn’t the case here. A Roquefort sauce is also available, and I’d probably order that next time or ask for some lemon to squeeze over this. As for the steak itself, it was a good piece of meat cooked precisely to the medium rare I requested, and the portion was right for someone who wants a good meal without feeling over-full. At $29 with potatoes and asparagus, it was very modestly priced, and it’s the most expensive steak on the menu.

We only tried one dessert, the item described as a dark chocolate mousse. This had a stiff texture that made it more like a chocolate ganache, and if you enjoy rich dark chocolate then it’s a must-try. It’s topped with chocolate sauce, toasted almonds, and a few blackberries, and so rich that we were content to split one between two people.

The wine list is relatively short but has a decent selection by the glass, and the prices are moderate. Our server knew the wines and was generous in offering tastes, which we appreciated. The servers here are friendly and efficient but haven’t learned the new menu completely so that any questions about the meals sent them racing to the kitchen for answers. If you have an allergy and need to know what is in things then ask, because the menu does not give all the details.

The El Segundo Chophouse is an improvement over the previous concept despite being an odd amalgam of Mediterranean and prairie flavors. While not everything clicks yet, this work in progress is worth a visit.