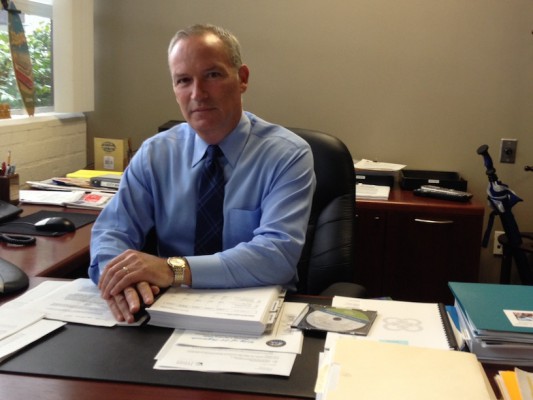 As homecomings go, the situation Greg Carpenter landed in a year ago wasn’t particularly sweet.

Carpenter was named El Segundo’s city manager while the city was in the midst of a dispute with its historical benefactor and biggest business – Chevron, which actually named the town in 1917 after it established its second refinery here. Perhaps even more significantly, the Great Recession had hit El Segundo particularly hard, forcing city government to reduce its size from 320 fulltime employees to 260 while still attempting to deliver similar service levels.

Carpenter, who graduated from El Segundo High in the Class of ’82, had never expected to return home as city manager. He’d left to go to college at Long Beach State University, where he studied Geography. He subsequently worked 18 years for the City of Long Beach – and two years in Lawndale – working his way up through the ranks to become planning manager. He loved the satisfaction of seeing projects come to fruition in the planning sphere and didn’t have a particular ambition to go any higher in city government.

“I never thought I’d be city manager,” Carpenter said. “I didn’t aspire to be one, necessarily.”

In 1998, Carpenter achieved his dream of bringing his wife and two sons back to his hometown to live as he commuted to Long Beach. Then, in 2008, he was hired as planning manager in El Segundo. Last year, he became an obvious choice to step in and calm the turbulent waters that had overtaken the city in the wake of its economic troubles and dispute with Chevron.

A year later, the city is emerging from its economic difficulties, and peace with Chevron has been established in a deal that is expected to net the city $134 million in additional taxes over the next 15 years. Broader forces are at work in both issues, of course, but Carpenter’s steady hand has been a key part of the equation.

Council person Marie Fellhauer said that Carpenter has been the right person at the right time and place for the city. His hometown roots, she said, have made for a seamless fit.

“I think it’s something unique and special,” said Fellhauer, herself an El Segundo native. “You know, the fact he was raised here, his parents live here, his children have been raised here – I think that is something unique compared to other city managers that come in from another city and work there for their 8 or 10 hours a day and leave. He walks to and from work every day. He’s a very unassuming kind of guy, yet hyper-intelligent and very levelheaded. He brings so much to the table – I just feel we are very lucky to have him.”

A wall-sized overhead photo of the five square miles that is El Segundo hangs on the wall of the city manager’s office. Carpenter seems to know every square inch. He points to one particular area with special fondness, the far west stretch of Hillcrest Street – his childhood home, which at that time was the far west of the city itself.

“I could go get lost for hours out there in that little sand dune and deserted area,” Carpenter recalled. “And then the [school] district surplused it and sold it to Anastasi in the 1980s, and they came in and built a tract of homes across the street.”

Carpenter actually had some kind of a presentiment for his City Hall. As a high school senior, he took part in a career week in which students were assigned to a department head and had to write a staff report to present to a mock city council also comprised of students.

“It was a very important decision and one that took a lot of thought,” said Councilperson Suzanne Fuentes. “Because he was planning and building director, we were familiar with his work and his style. He’s a very thoughtful man – he thinks about things, gets information, and vets all the issues. He’s very unassuming, very responsive, and extremely knowledgeable.”

“He took on a huge responsibility,” she added. “I am so grateful to him. He came in with the city facing a huge deficit and he took that on. Truly he is a public servant. I know he is available any time day or night.”

Carpenter, who also obtained his master’s in public administration at LBSU, is in some ways still a geographer at heart. One of the many things he loves about his job is that he’s still learning things about the geography of El Segundo – for instance, the fact that Grand Avenue as it slopes towards the ocean is no longer El Segundo, but Los Angeles.

He also had identified part of what makes the city, with its nighttime population of 16,700 residents and daytime workforce of roughly 70,000 people, so utterly unique. All four city borders – Chevron along the south, Hyperion and NRG along the west, LAX north, and the aerospace industry east – in some sense seal off the old-fashioned little town in the middle from the outside world.

“El Segundo is an island,” Carpenter said. “And it’s an island in more ways than one. In some ways, it takes on the culture of an island, where everyone knows each other. People become self-reliant….We try to solve our own problems. Every island has its own culture.”

As city manager, what strikes Carpenter most, and what he is most grateful for, he said, are the people he is serving – not just the five direct bosses he has in the City Council, but the entire residential and business community.

“Our customers here, compared to other places I’ve worked, are I think extremely reasonable,” he said. “Generally, people here are very fair. It’s easier to work for the residents and businesses here in this city than my experience working in other cities. They have very reasonable expectations of what government should do for them, and what government is able to do for them.”

Part of the ethos of city hall in El Segundo has long been a certain no-nonsense practicality – the city was first in L.A. County awarded as the most business-friendly and has again been nominated for the award because of its relative lack of red tape and delay. A project that might take six months to be inspected and approved in Los Angeles is often handled in days in El Segundo. For Carpenter, this is a key part of the city’s uniqueness, and it’s reflective of his own character, as well: Both the city and its manager work with little fanfare but instead focus on moving forward.

“I tell people when I hire them this is a great place to work because you have all the interesting challenges and issues that large towns deal with on the planning and building side… But it’s a small town dynamic, and we are able to be very responsive, very accessible to our customers,” he said. “We pick up the phone, call, and talk to people and resolve problems fairly quickly here. We do have the ability, unlike a larger organization, to be very nimble in our decision-making.”

Fuentes said that the city’s organization has come to reflect Carpenter, as well. She noted that the confidence he has inspired in employees, and the pride he takes in their work, has been a key factor in his success as city manager.

“He’s very involved with and very proud of his staff,” she said. “One of the things I’ve really liked is he really backs his staff and cares about them.”

Fellhauer said that Carpenter’s calm, and care, have been especially valuable at city hall.

“It has been a challenging time, and I think Greg has taken these issues – in terms of people facing layoffs, or shortages of employees, or not being able to fill positions – he’s taken it by the helm and he’s done an extraordinary job of making the employees feel they are appreciated,” Fellhauer said. “He understands where they are coming from; they are overworked, and we have to do more with less.”

Carpenter credits others for much of what has gone well. He said his wife of 25 years, Julie, who works professionally as a human resources director, makes his life easier by keeping the family’s home front organized. And he credits the council, city employees, and the community itself.

“I think the thing I’m proudest of in the last year is seeing the workforce, the city council and the community, to some extent, pull together during difficult times and stay positive,” he said. “The wheels could have fallen off the organization…We could have felt sorry for ourselves and stopped being focused on maintaining service levels. To the credit of our workforce, they’ve done the best they can to maintain services. You can’t take a 20 percent cut in employees and have the same service levels, but we’ve tried our best not to make it apparent.”

More than anything, as Carpenter feels a sense of gratitude for finding himself somewhat unexpectedly as the city manager of the town he loves best.

“It’s a privilege to live here, and a privilege to work for this community,” he said. “I never envisioned being city manager of El Segundo. I am extremely honored, humbled, and grateful that I was asked to do it…. I’d love to end my career here. It’s home. It gives me a reason to come to work every day – it’s great to work here and see positive things happen. It’s nice working for a cause, a purpose.”