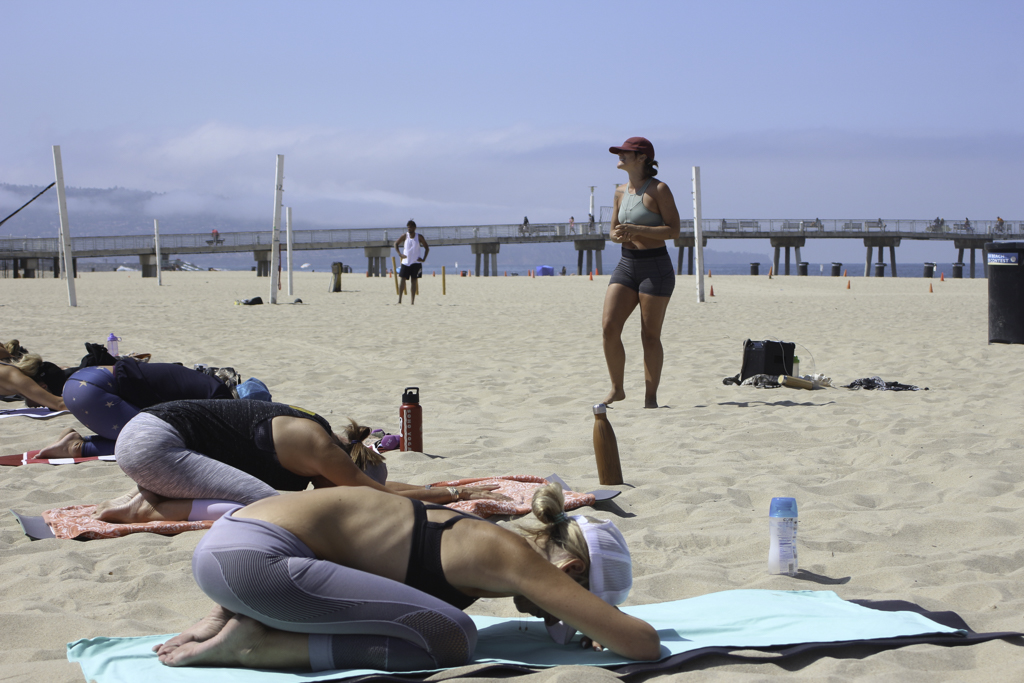 Instructor Natasha Snow Needles has students begin in child’s pose at a SoHo Yoga class on the beach in downtown Hermosa. Photo by Ryan McDonald

The sun was shining and the late-morning wind was gentle, still making up its mind about which way to blow, when a dozen or so bodies laid their collective heads to rest on mats laid out on the beach near downtown Hermosa.

Welcome to yoga class in the time of the coronavirus.

The class was offered by Hermosa Beach’s SoHo Yoga as part of a new program that allows gyms and other fitness businesses to move their operations into parking lots, sidewalks, parks and beaches. SoHo, a popular yoga studio located on Hermosa Avenue just a block away from the class’s 14th Street location, was among the first to take advantage.

Gov. Gavin Newsom last week required gyms to close in-door operations, but scientists generally think there is a lower-risk of transmitting COVID-19 outside than indoors, and many businesses have shifted their operations. While restaurants have long offered al fresco dining, workouts can take a bit more ingenuity.

On Tuesday morning, SoHo co-owner Natasha Snow Needles led two, hour-long classes, a Power Flow and a Sweat N’ Sculpt. As participants moved from child’s pose into downward-facing dog, Needles acknowledged that the outdoor setting provided more opportunity for distraction, but urged students to remain connected to their breath. Yoga, she noted, was done outdoors for centuries before the first yoga studio was built. It helped that, despite the change in setting, her trademark blend of anatomical cueing and light-hearted humor remained unchanged.

“Maybe you can be one with the sand,” she said.

Fitness establishments have been among the businesses most impacted by the coronavirus pandemic. They were forced to close their doors for three months, and while some have been able to get by with online classes, others, including gym giant 24 Hour Fitness, have declared bankruptcy. (As part of the bankruptcy proceedings, 24 Hour Fitness announced it will permanently close 100 locations, but so far its Hermosa and Manhattan Beach locations remain among them.)

As the number of cases and hospitalizations declined, the state permitted gyms to reopen their doors at the end of May, and Los Angeles County issued guidance last month. But with new cases surging and the seven-day positivity rate more than doubling over the previous month, Newsom last Monday said that gyms in counties not meeting certain health metrics — counties that contain roughly 80 percent of the state’s population, including Los Angeles — would have to close their indoor operations.

That left an opening for outdoor activity. Shortly after Newsom’s announcement, Hermosa’s Parks and Rec, Community Development and Police departments began collaborating on ways fitness establishments could keep operating, said City Manager Suja Lowenthal. Those with access to outdoor spaces on their own property, such as parking lots, could get going right away as long as they complied with new health and safety rules.

Forrest Jung is the owner of CrossFit South Bay, a gym on Fifth Street near Pacific Coast Highway. It has broad garage-style doors and an outdoor area that makes up about half of its total square footage, which made moving classes outdoors easier.

Easier, but not quite easy

“It’s just a constant moving of equipment. Move it in, move it out, move it in, move it out. Sometimes the bars will get hot in the sun, so you’ve got to bring that one back in. And obviously the ocean air just rusts everything. But, luckily, we’re a gym, and we’re used to moving stuff,” Jung said.

It’s been tough to keep up with the shifting regulations that his business faces, and Jung said he ended a multi-year social media hiatus in order to stay current. He said while CrossFit, known for high-intensity exercises that often involve heavy weights, can be hard to adapt to online workouts, the gym loaned out some its Kettlebells and medicine balls to clients after the closure in March, and his clients have proven resilient. Now that they’re back, he sees the same approach helping clients adjust to limited capacity and a requirement to sign up in advance.

“One thing that CrossFit has is a mentality that’s kind of like, ‘Give me the parameters and I’ll just get it done. I’m going to be doing bodyweight stuff, and I have to make due with a sandbag or a can of paint, sure, I can figure it out, I’ll take that challenge,’” he said.

To use public spaces like the beach or the parks, the city created a temporary permit process for fitness instructors. Lowenthal said some kind of permit process was necessary to ensure compliance with health and safety regulations, and to prevent parks and beaches from becoming inaccessible to residents and visitors who wanted to use them for more leisurely pursuits.

Before coming to Hermosa, Lowenthal served on the City Council in Long Beach and worked for the city of Santa Monica. In both places, her work showed her ways cities could be creative about using public spaces. Both cities also experienced disputes about the unauthorized use of public spaces by for-profit fitness instructors, including a multi-year battle between residents and exercise enthusiasts at Santa Monica’s Palisades Park.

Hermosa, a smaller city but as gym-obsessed as any other Southern California Beach town, has had its own issues with unauthorized instruction before the pandemic, a problem that could worsen with the restrictions on gyms, some interviewed for this story suggested.. (People found to be giving classes in parks or on beaches without a current permit will be given warnings and, if the practice persists, cited.) But Lowenthal said outdoor fitness options, along with helping local businesses survive, can be a way to signal optimism in trying times.

“That vitality out in the open, in a time like this, has got to be uplifting. If we were in a place where no one was outdoors, if there was a lack of activity, a lack of vitality … I think during the pandemic, when the unknown is pretty much our everyday worry, if we were to roll up and we saw no life outdoors, I think it would be harder, harder to get through these times,” Lowenthal said.

SoHo co-owner Pete Niva said it’s been challenging to keep up with the rapidly changing regulations, and simultaneously appease members who signed up expecting a heated class that is difficult to replicate even in the dead of summer. (The studio’s Hermosa Avenue storefront contains both a heated and a non-heated room.) The beach classes also don’t come close to equalling the pre-pandemic bookings. Niva said that before the pandemic the studio typically had about 16 hours of classes per day, and would get between 1,500 and 2,000 bookings per week.

But he’s grateful to have the opportunity to offer something. Not many yoga studios, he noted, have one of the world’s most desirable beaches just steps from their front door.

“We’ll take anything but a shutdown,” Niva said. “Close the road, and I’ll do yoga in the streets.” ER