Hans Holbein the Younger: art for the ages 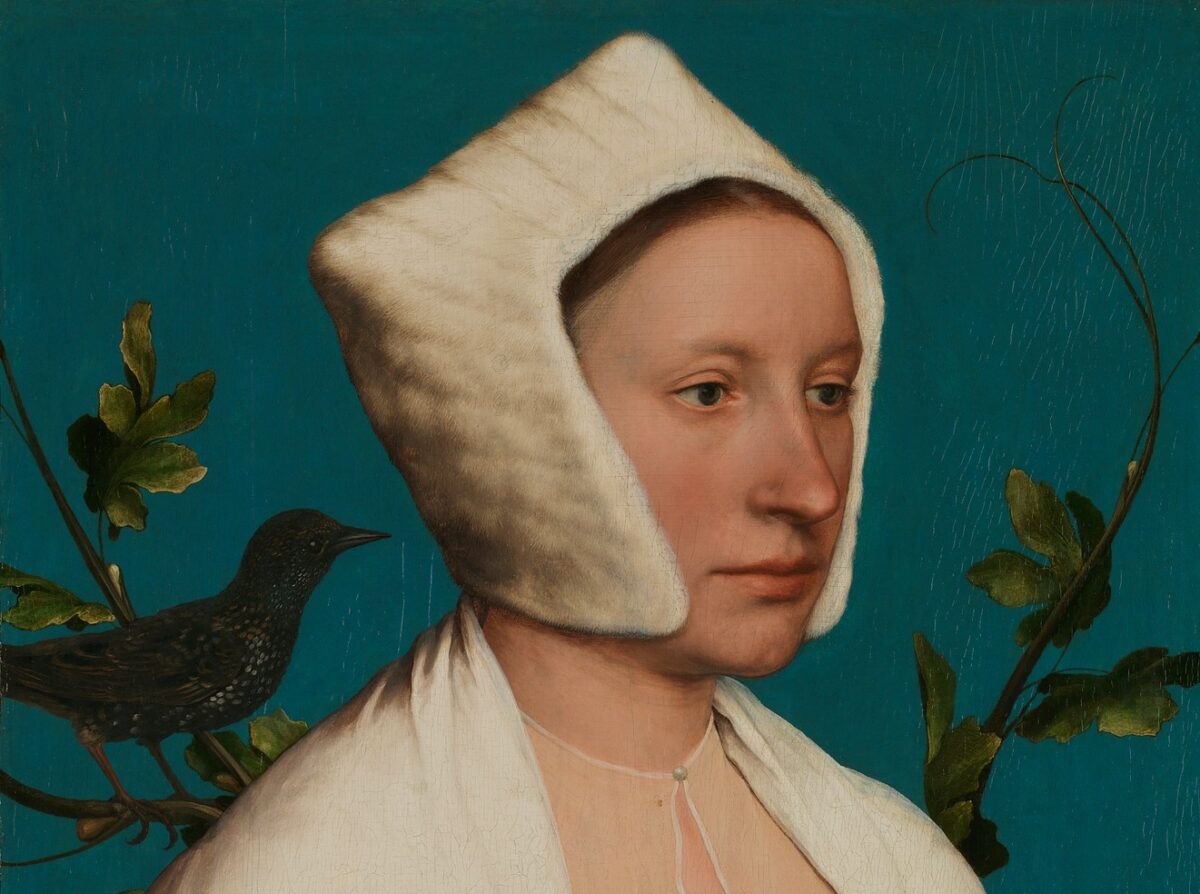 “A Lady with a Squirrel and a Starling (Anne Lovell?) (about 1526-28), by Hans Holbein the Younger. Oil on panel. © The National Gallery, London [detail, see below]

“A Lady with a Squirrel and a Starling (Anne Lovell?) (about 1526-28), by Hans Holbein the Younger. Oil on panel. © The National Gallery, London [detail]

The paint dried, the sitters died, but these paintings are fully alive

Hans Holbein’s portraits on view at the Getty

There are works of art by certain renowned painters that one can only hope to see brought together and presented locally, in such a manner as to both celebrate the artist and amaze the viewer. “Holbein: Capturing Character in the Renaissance” is precisely that kind of exhibition. It is concise, it is exquisite and grand, and in all likelihood it is the first major art show of substance and gravity in Los Angeles since early last year. 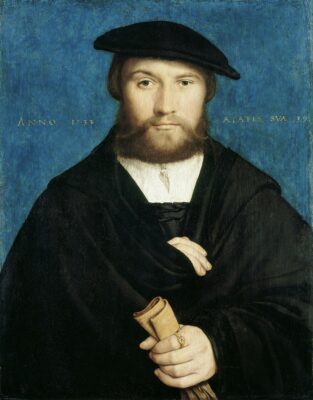 Hans Holbein the Younger, born in Augsburg, Germany, in 1497/98, apprenticed in Basel where he’d gone with his older brother Ambrosius in 1515, although both young men had surely studied with their father, Hans Holbein the Elder, a remarkable artist himself.

In time, as Getty paintings curator Anne T. Woollett phrases it, Holbein became “a superb designer, draftsman, and miniaturist, as well as the leading portrait painter in early Tudor England.” He was court painter to Henry VIII, acquainted with Desiderius Erasmus (still remembered for “Praise of Folly”), and Thomas More, the author of “Utopia.” Other notable contemporaries included Thomas Cromwell, Sir Thomas Wyatt, and Martin Luther, plus such artists as Albrecht Dürer and Lucas Cranach the Elder. Another artistic peer, the Netherlandish painter Jan Gossaert, is represented in the exhibition by two impressive paintings. Clearly, standards were high. 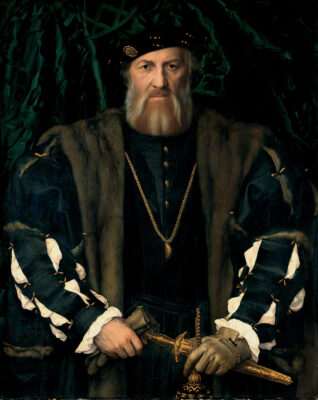 “Charles de Solier, Sieur de Morette” (1534-35), by Hans Holbein the Younger. This portrait, now in Dresden, is not in the current show, but what an impressive work!

Let’s not forget the subtitle of the show, “Capturing Character.” In the accompanying catalogue, Austeja Mackelaite describes the method and material of the preliminary drawings, a few of which are on display: “To capture the likenesses of his sitters in all their complexity, Holbein skillfully employed an array of artistic strategies in his portrait studies… Combining careful observation with artful manipulation, these ‘Pictures by the Life’ palpably evoke the presence not only of Holbein’s sitters but also of the artist himself.”

How a person is attired and groomed says one thing, but additionally, in order to convey character and other personality traits, Holbein highlighted rings on fingers, hat badges on caps, and various attributes like books and letters and even pets: a starling, a squirrel, a hawk. It’s evident that these men and women were in positions of power or influence, and well educated. Hat badges, for example, known as “enseignes,” were worn on caps, and these jewel-like medallions signaled a certain honor or distinction the way that pins and medals on lapels do today (women wore similar adornments, but often on the front of their gowns). A few hat badges are reproduced in the catalogue, but they must be seen in person to be fully appreciated. 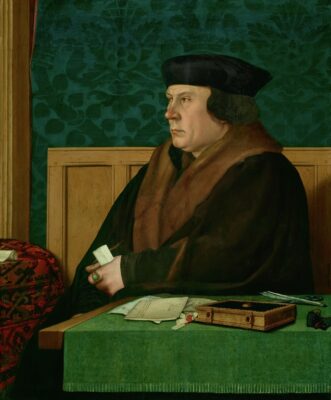 And then there are the many inscriptions that artfully adorn Holbein’s paintings, inscriptions that were, says essayist John Oliver Hand, “indeed essential, components of his portraits, conveying different kinds of information about his sitters. His mastery of Gothic miniscule, Roman capitals, italic, and secretary confirms a dedication to his craft.” The technical skills involved, Hand continues, “were unmatched in contemporary Germany portraits.”

The colors will astonish you. They are rich, sometimes saturated, vibrant and sometimes breathlessly subtle, as in the dark tones, like textured chocolate, of Simon George of Cornwall’s silk jacket. The sublime hues of Holbein’s “Portrait of a Lady, Probably a Member of the Cromwell Family” can mesmerize. How is this possible? Perhaps each viewer will find one such work to gaze at in sheer wonder and appreciation. 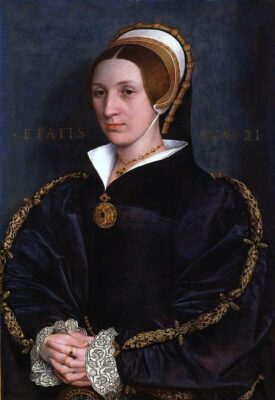 “Portrait of a Lady, Probably a Member of the Cromwell Family” (about 1535-40). Oil on panel. Toledo Museum of Art

The installation itself is a work of art, the adjoining galleries darkened to a level of intense intimacy. It allows Holbein’s genius to reach across five centuries, with all of its glory intact.

There are, lastly, two more rooms to explore, given over to many of the West Pavilion favorites while that wing of the Getty Center undergoes renovation. It’s a bit of a greatest hits package, assembled to woo and dazzle, with pictures and a sculpture or two by masters of the 19th century, from Delacroix and Géricault to Manet, Monet, Turner and Munch.

For now, however, the spotlight shines brightest on their illustrious predecessor, who died in 1543 at the age of about 45, a victim in all likelihood of the plague, but whose art endures.